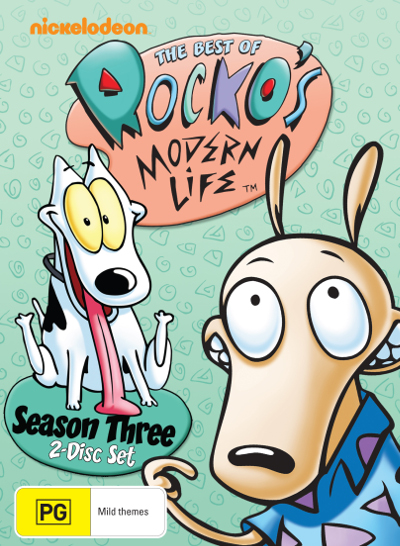 Many consider Rocko’s Modern Life to be Ren & Stimpy lite. Having taken the opportunity to go back to my childhood and re-watch some of the best moments from the 3rd season, nothing could be further from the truth. Rocko has his own, unique identity and the show itself is so tonally different it’s hard to see why people would make the connection at all. Sure, every now and again Rocko’s eyes will pop out, or his brain will be exposed but they aren’t putting these elements in to gross the audience out. While Ren & Stimpy was known for its grotesqueness, Rocko’s Modern Life is more morbid than visceral. In my opinion that’s a good thing not only because it means Rocko isn’t a knock off, it also means that there’s a deeply considered universe here that you’ll be able to enjoy for its own merits. 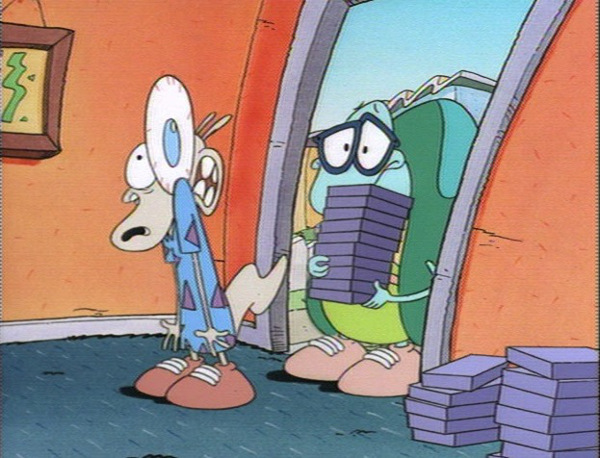 Rocko (Carlos Alazraqui) is a wallaby who has migrated to the United States from Australia. His 3 best friends are a turtle, cow and dog of which only the dog hasn’t been anthropomorphised. Filbert (Mr. Lawrence) the turtle is a neurotic mess while Heffer (Tom Kenny), the cow, is a morbidly obese fool. They are O-Town’s most socially awkward group, resulting in them becoming embroiled in the bizarre fringes of their community. Rocko’s prudishness often comes in conflict with Filbert and Heffer’s plans, creating the bulk of the comedy here. With no over-arching plot to speak of, excepting nods back to events in previous episodes, it’s worth exploring what makes this show tick. 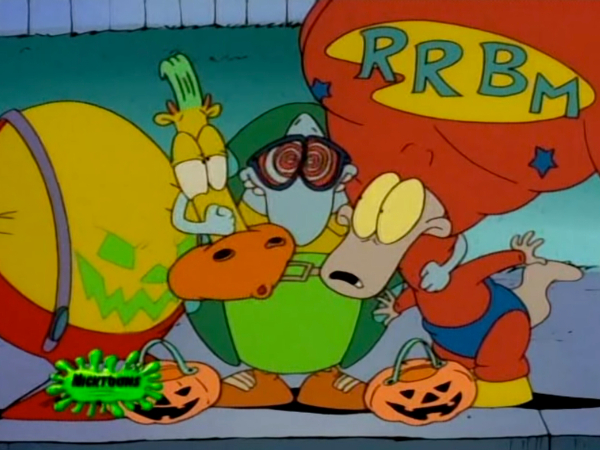 Earlier seasons may have been more graphic in content with sploogey looking brains and Sparky – the dog – continually eating his own vomit. As the show matured it didn’t move away from engaging its audience viscerally. There’s a shift in the third season which is the result of the creative team becoming comfortable with their own identity as a production. Gently backing down from graphic imagery is probably a sign of this. Instead, we’re given more complex themes which allow for nuanced character interactions to emerge.  Half Single White Female thriller, half Marcel Marceau slapstick, the episode Fatal Contraption epitomises this approach. With no dialogue, this episode milks laughs out of a fairly heady and uncomfortably weird set up.

Those familiar with the franchise will want to grab this for the nostalgia alone. I’ve brought it up with a few people and invariably they spout their favourite quote or ramble about their favourite episode. When I was growing up it was one of the most watched programmes and a favourite of mine. Other than being less graphic, you may not remember how dry the show could be sometimes. Memes have been circulating recently of some very adolescent jokes that are hidden in the show. Subtle sex jokes litter Rocko’s Modern Life. Finding them is an added bonus, some of them are quite subtle and you have to ask yourself; ‘did they mean that or am I looking into it too much?’ I’d say they were all intentional, just from the series creator interview. 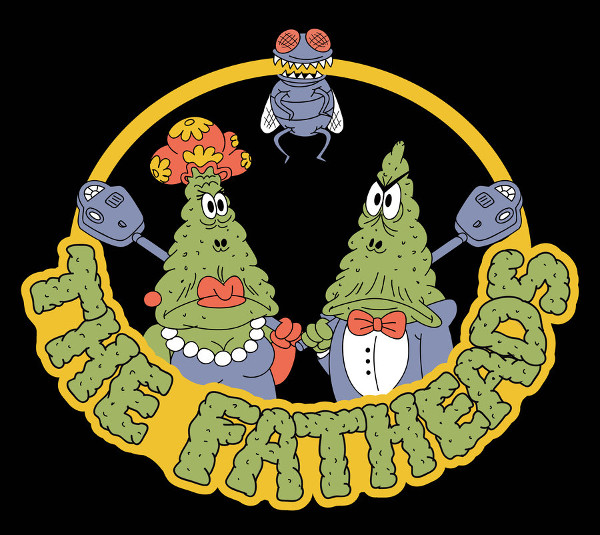 Rocko’s Modern Life has an iconic visual style, one that seemed perfect for the era of analogue television. They’ve played into that high contrast sheen old CRT televisions had on purpose. Aesthetically, the show has a unified gronkiness about it. Shapes always maintain their form but their sizes shift wildly. Everything is distorted as if it were left in the sun for far too long, including the characters. All of this, combined with the washed out colours and empty spaces, reflects the flaws of O-Town.

The rote nature of modern American life plays out through the imagery. We see recycled assets like the Chokey Chicken (wink, wink) fast-food restaurant, inflated and limp. Authority figures are always stuffed into uniforms, with puffed chests and bulging eyes. Joe Murry, the creator, uses the show to gently prod the world we live in. The absurd humour always has a root in reality, unlike some cartoons which are wacky simply because they can be. As a result Rocko’s Modern Life looks like a reflection of our world through a warped mirror, albeit with more animals. 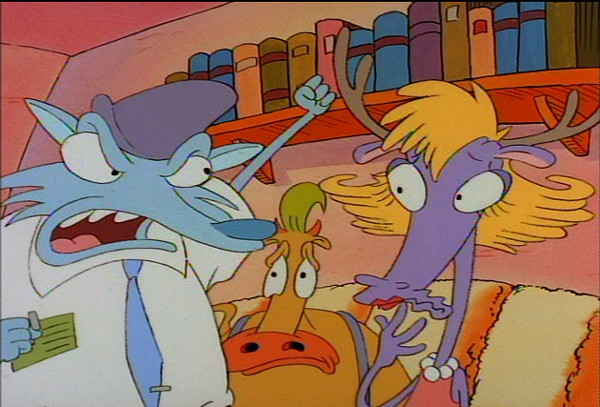 Cartoon shtick always comes with a cheesy soundtrack. There’s no way you could mistake the soundtrack of a cartoon for anything else in the world. Rocko’s Modern Life is no exception. I’m positive just mentioning it will bring up the tune in many readers’ heads. As a theme, it’s almost perfect in establishing the tone of the show you’re about to watch. Much of the soundtrack behind the action follows suit by being equally shambolic. Many of the noises used are inconsistent with the action on screen. This may not be a new technique for cartoons but it brings a nice levity to the action. All in all, the use of sound here is the bow on a really neat package.

There’s only one extra here, so thank goodness it’s not more trailers. Over half an hour the show’s creator Joe Murray talks about his influences, the team and what Rocko’s Modern Life was really all about. Many of the team moved on to Spongebob Squarepants after Rocko, a neat little Nickelodeon overlap that must have happened to many shows. No one other than Joe actually appears on the screen however he does credit others involved as they intersect his story. If you’re interested in animation you’ll find little advice here. You will see the internal workings of an animation studio, so it’s not a fruitless endevour. Finding out how such insanity is put together for a major international corporation is fascinating; Joe gives us some of the more interesting conflicts he had with the studio in this presentation. This special feature is more than a welcome addition, it’s an essential part of a full fleshed best-of. 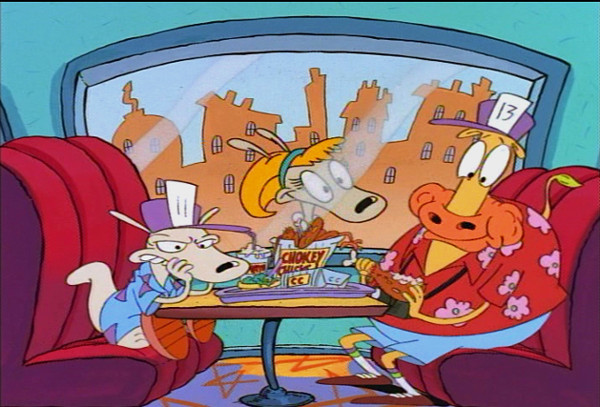 Rocko’s Modern Life was a large part of my generation’s youth so it’s hard to put down the rose tinted glasses. Yet looking back on the production after nearly 20 years I can safely say it still stands up to today’s standards. O-Town was so well crafted, with its layered with social satire and zany plots, that it developed a life of its own. Watching the show again will not only remind you of the crazy antics you enjoyed the first time around but will also reveal a whole new block of content that was designed to only be accessible to older viewers. While Rocko’s Modern Life may not have some of the elements its contemporaries have, such as Spongebob’s surrealism, it’s a solid show. Picking up this box set is well worth your time, whether you’re revisiting a childhood favourite or if you’re getting into the series for the first time.