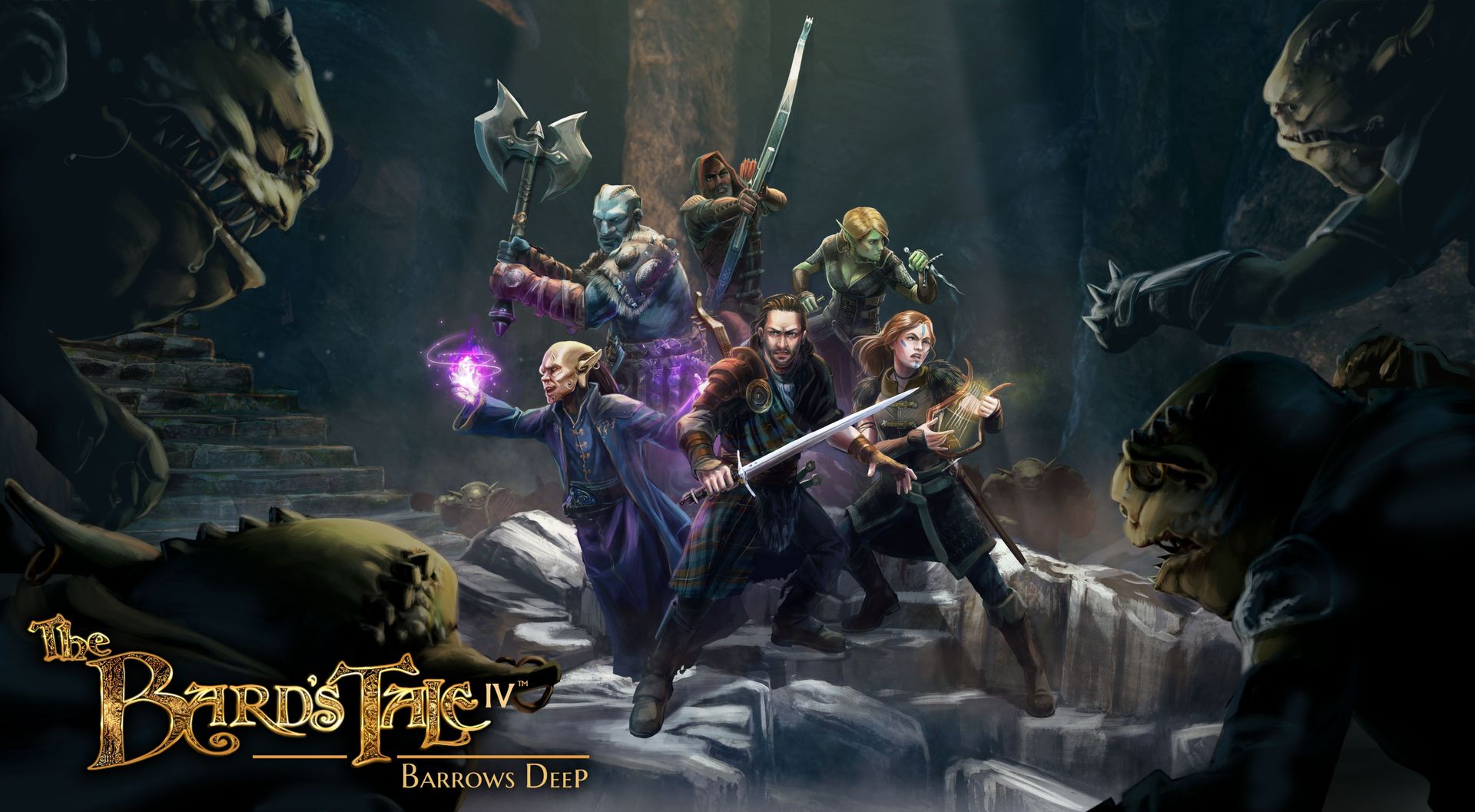 Things are not well in Skara Brae. The fanatical Fatherites have taken over the city. Their Paladins are terrorizing the locals with their oppressive rule. The non-human races are under siege as machinations are underway to drive a massive rift between them and the humans. Our heroes will rise in this chaotic environment to bring peace to Skara Brae.

The Bard’s Tale IV: Barrow’s Deep offers solid writing. The plot is interesting and drives the action forward, even for younger players who are new to the long running franchise. The world is nicely fleshed out, with plenty of side content and background lore. 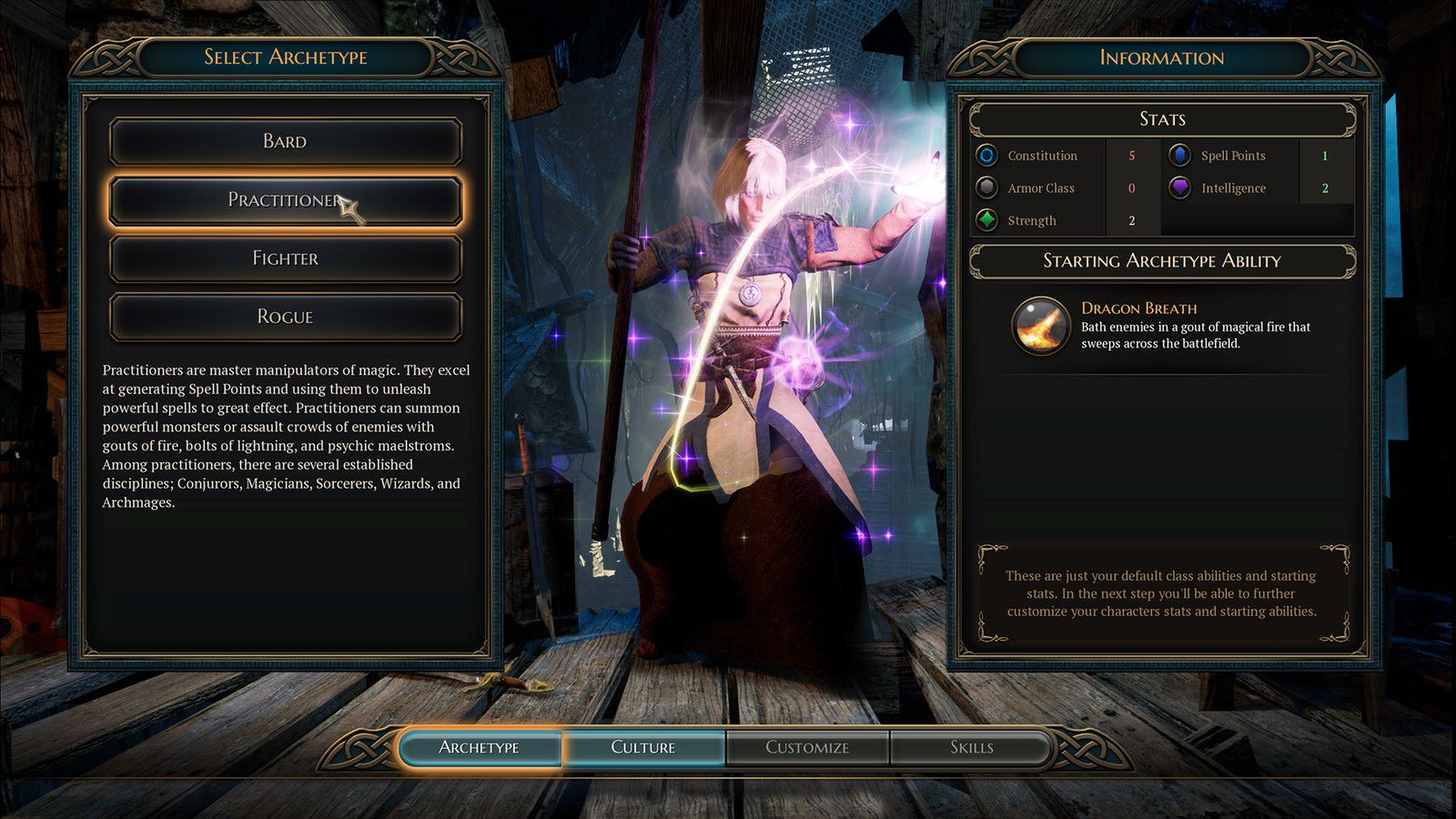 The Bard’s Tale IV: Barrow’s Deep is a first-person dungeon crawler along the lines of the Legend of Grimrock series. The game offers four classes, each with its own skill tree and a variety of specializations to build the perfect character. Since each class can only carry four active skills, players will need to build parties more so than individual characters. While character progression in The Bard’s Tale IV strikes a good balance between depth and accessibility, the lack of confirmation for spending skill points and not having a method of resetting skills is extremely frustrating. It seems like hiring new mercenaries is the game’s alternative to skill resets, but it makes it hard to get attached to characters knowing the only way to adjust skills is to get rid of them. The lack of confirmation windows for spending skill points makes accidental clicks a real possibility, which simply makes the lack of skill reset worse.

Combat is incredibly satisfying in The Bard’s Tale IV. The four classes offer distinct gameplay styles. Success hinges on strategic use of the entire party as players only have a limited number of actions per turn and most abilities carry cooldowns. The small four by four combat grids and limited ranges adds just enough complexity to combat that will challenge the player’s tactical ability without turning the game into a full-blown strategy RPG.

The level design is very good. Dungeons offer a solid mix of puzzles, riddles, and combat. The puzzles and riddles are usually creative and are just difficult enough to get the brain going a bit. These are not puzzles that will leave players banging their heads against the keyboard. Often times, most puzzles can be brute forced after a reasonable period of trial and error. I really like the Elvish weapons that uses puzzles as part of the process to improve the weapons stats. It’s a novel idea that adds a little more challenge than looting thirty wolf pelts to increase the strength by one. 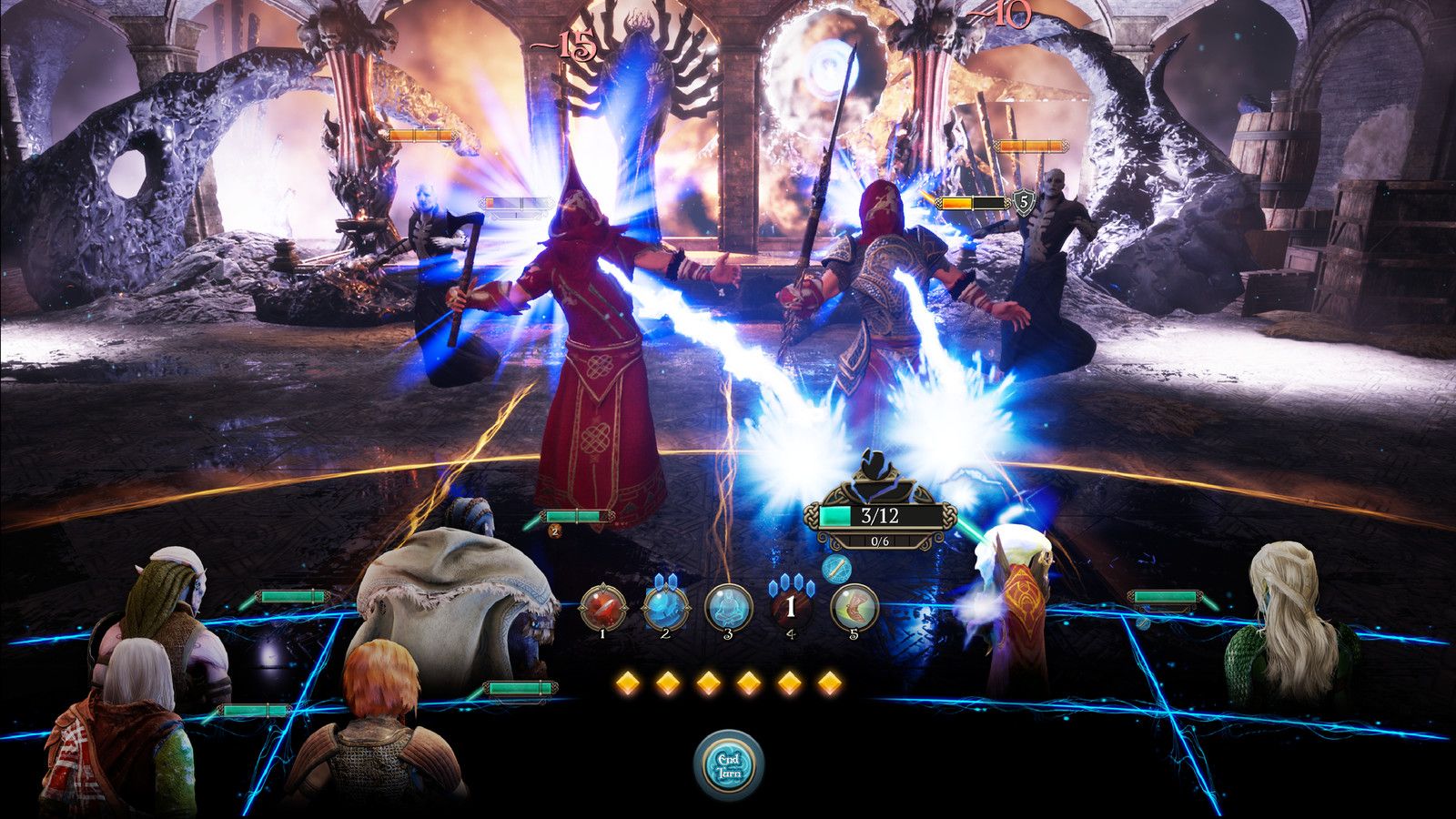 Where the level design falls flat is the stealth portions of the game. Many areas are locked away by high level enemies or require players to sneak past difficult fights. The stealth system is incredibly bare bones, as players need to be just outside of aggro range to determine the difficultly level of the fight. Additionally, it’s hard to estimate the exact aggro range of enemies, making it even harder to sneak past certain areas. The stealth system really is no fun considering failing to sneak by will almost always send players back to the last save point.

The game’s difficulty level occupies a decent middle ground. Players are not able to mindlessly plough through the game with little concern for strategy and character management, but at the same time aren’t wildly punished for every little mistake either. The difficulty level can be tweaked a bit with the flexible save system. Players are only able to create permanent saves at special save altars. Ones outside of town can be destroyed for an experience point bonus at the cost of being forced to trudge further back if the player fails. It’s a neat risk/reward system that pays tribute to old school sensibilities with a slightly modern twist. For the really hardcore, a legacy mode is in the works to amp up the challenge.

The controls are decent for the most part. Things are kept relatively simple with straight forward keybindings and easy point and click mechanics. There are a few fumbles though. If keybindings are adjusted, some menus are not updated with the correct binds. Sometimes targeting enemy backlines with large enemies hogging space in the front row can be a bit tricky as the available hitbox is very miniscule. 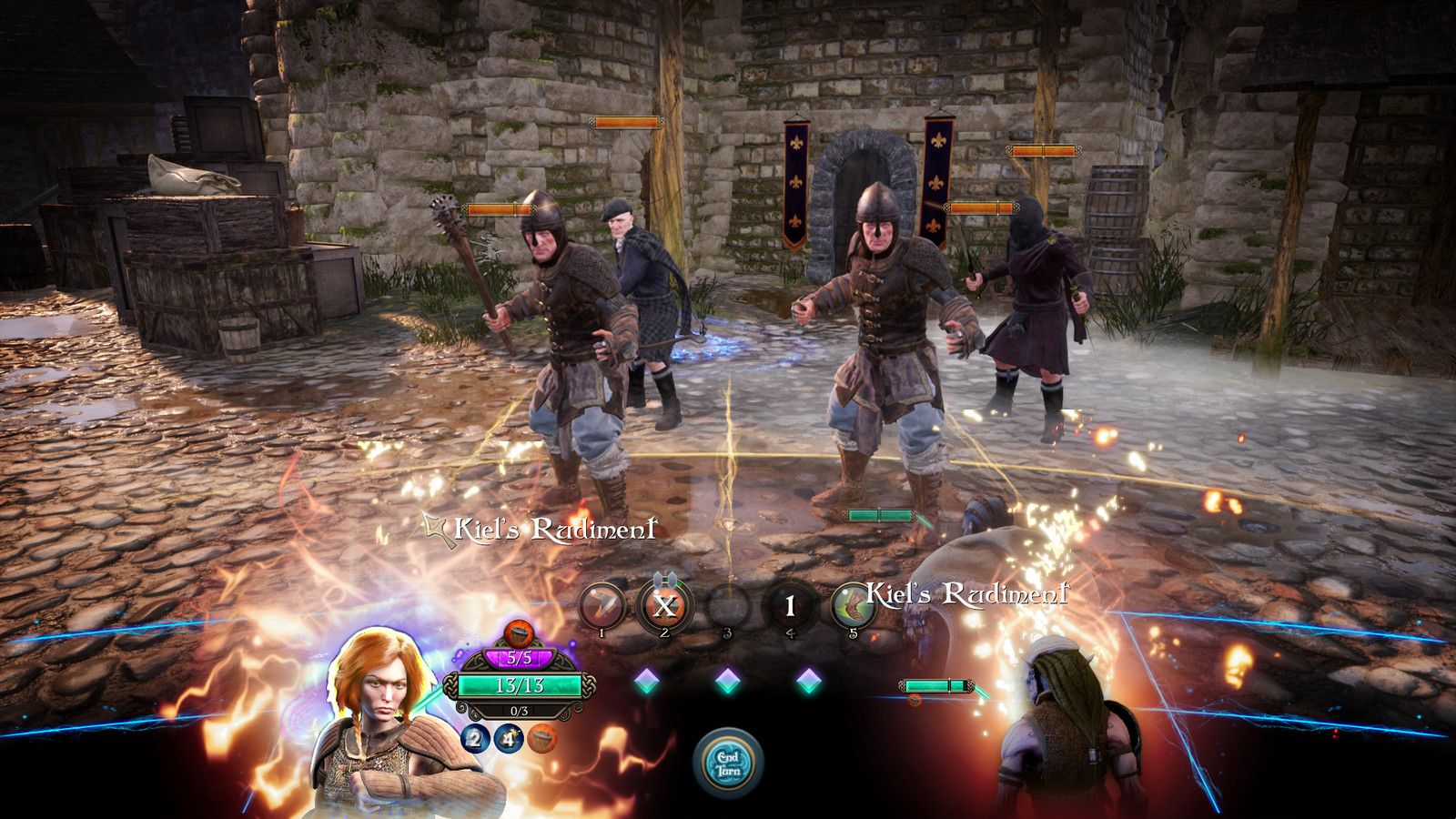 Visually, The Bard’s Tale IV: Barrow’s Deep is a bit of a mixed bag. The art style shoots for realism with a slightly cartoonish touch. The style seems to be unevenly employed as characters tend to look a little bit more cartoony than everything else. Character textures feel rather low quality, which clashes with the more natural looking environments. The animations are generally very wooden, especially facial movements.

Considering the dated looking graphics, The Bard’s Tale IV runs horribly. The game suffers from painfully long load times, and once loaded in, the game still experiences some ugly texture popping while everything continues to load. The load times were bad enough that I chose to keep most of the save game pillars instead of destroying them for experience simply to avoid the extra two to three minutes for each reload when I failed to beat a fight. Unfortunately, the only real way around this issue is to load the game on an SSD. The game also suffers from bad frame rate drops when looting containers and loading into new areas. inXile Entertainment is aware of The Bard’s Tale IV’s severe optimization issues and have released two patches since launch to improve the situation. While there have been some gains, the game still runs poorly at the time of publishing this review. 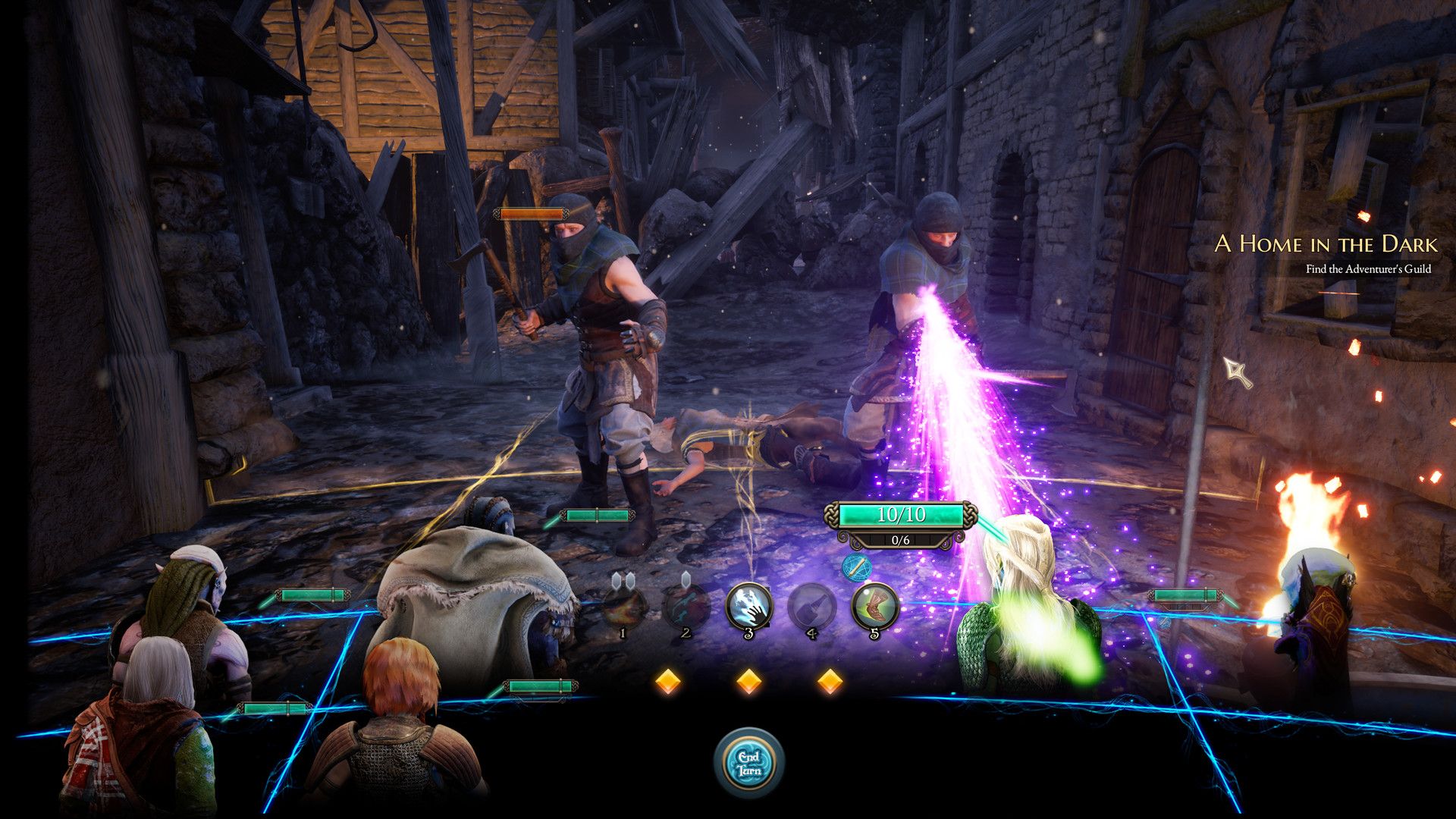 The Bard’s Tale IV: Barrow’s Deep offers a good audio experience. The sound effects are solid, though nothing really stands out. The voice acting is generally strong, with only a few flops. The music is where the game really shines. The soundtrack is composed of Gaelic style music, with performances by leading artists. The decision to skip over traditional video game scores in favour for a worldly sound makes the soundtrack unique and absolutely memorable.

The Bard’s Tale IV: Barrow’s Deep is a solid dungeon crawler hamstrung by serious technical issues. Worth a buy… if inXile can fix the issues.
6.5