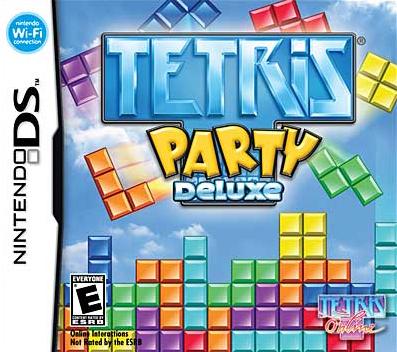 The classic game of Tetris has had many revivals and reincarnations since launching back in 1984. With the release of Hudson Soft’s Tetris Party on the WiiWare a couple of years back, many gamers got the chance to play the classic puzzler in a whole new way. Fast forward to today and we now have Tetris Party Deluxe, an upgraded version of the fan favorite downloadable title has hit the Nintendo DS and Wii with new modes and loads of ways to play with you and your friends. Here is my review for the Nintendo DS version of Tetris Party Deluxe.

Story
I don’t think I should even bother mentioning this, but there is no story present or needed in this title. Tetris is known for the addictive gameplay to start with, so lets get straight to the point on how this one measures up.

Gameplay
There are eight modes in Tetris Party Deluxe, but each rely on properly inserting the classic tile-based pieces in the appropriate spots on the game board. The first thing players will see as they boot up the game is to either start the main game, or a standard version of the classic Tetris. When you go into single player mode in the main game, you have eight different options for modes on how to play so I will run through each of these modes and explain how they work. 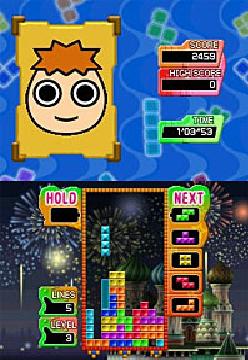 First up is Marathon Mode. In my opinion this is the heart and soul of the game as it is the standard classic. With two different ways to play which are endless and standard marathon, players can either compete to get the best score or just see how fast they can knock out 150 lines. Marathon mode plays great and everything runs smooth. An extra option is also given while playing to hit UP on the d-pad to quickly insert the piece into the playing field which is great for quickly moving through pieces as you fill up the board and deplete lines. Another feature in this mode I liked was the ability to hold a piece that is not needed at the time for later use. This really came in handy due to the speed of game increasing over time making those crucial moments of shape accuracy much easier. Overall, it may not be too complex but any fan of Tetris will be able to easily jump right in and play for hours in Marathon as it has everything a hardcore player would want, yet simple enough for a casual fan to pick up and play on the go.

For the competitive players out there that would rather duel the computer, Computer Battle is the next mode of choice. This works almost identical to the standard game, but with extras thrown in to change up the odds a bit. Your display is on the bottom screen and the computer is shown at the top screen so the player must clear lines and try to make the biggest combos possible as each line you clear will add another stack to the opponent’s field. I enjoyed this mode for the most part, but the computer player was a bit on the easy side and moved slow throughout the whole match. Later on, things may get a bit difficult, but most of the way through felt just like single-player so those who are looking for a challenge would best enjoy the multi-player option.

There are a few modes within the game that mix it up and go outside of the classic formula as well. The first of those being Field Climber. In the usual playing field, a small stick-like man is at the bottom and it is your job to stack the blocks up for him to climb out and reach the goal zone. The catch is you must make each step only one block high so he can easily climb to that piece. This mode can be quite challenging as you always have to use strategy to ensure pieces properly place correctly. I smashed and trapped the helpless climber many times before I got the hang of this mode, but with practice you will be hitting goals in no time. As you progress, more blocks are on the ground making it more difficult to make the footholds for the climber so the challenge gets greater as you move along.

With the game of Shadow, a certain shape is shadowed out and you must place the pieces on the board in the exact area to move to the next area. There is also in-game editor where you can make your own shadows and change up the background as well as even the stage music. Shadow may be simple, the level editor alone had me in the mode for a couple hours creating new challenges. 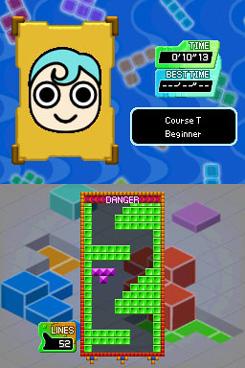 Stage Racer assigns you a random Tetrimino (Tetris block) and drops the piece through the constantly moving stage for you to guide with the d-pad. Constantly switch positions to make the piece fit throughout map and make it to the goal is the objective. Abyss mode changes things up by making the piece constantly drop until you finally hit a snag and lose, with the number of lines cleared being your final score. For those wanting a more fast paced game, Stage Racer is a great addition that added some intensity to the relaxing setting of the game.

For speed demons, Sprint is a time-based version of Tetris where you must clear 40 lines as quick as possible. Master Mode by far is the most challenging mode in the game, as the game plays like the classic, but pieces do not fall into the field, they appear and you have just barely a second to switch them into the appropriate positions. Finally, Bombliss wraps things up nicely with the main objective being to form bombs out of tiles, then blow up remaining Tetriminos by completing lines in the field.

I mentioned multi-player earlier, and while the single player is fun, the game seems to beg to be played with friends. Using Single or Multi-card, you can locally challenge a friend to the mode of choice and see who racks up the highest score in the end or have a duel to the death. Wi-Fi is also an option and being able to play any players around the world was great as they even threw in mic support.

There is literally so much to do in Tetris Party Deluxe as every mode is superb and has a bit for everyone. While every mode takes from or uses the original formula, each have their own bit of addictive gameplay so things never get boring and replay value is not even an issue in the slightest. I didn’t encounter one bug or game error so any puzzle fan will be in pure heaven as they try and decide which mode to play. I will say I kind of wished the touch screen was used as I think it would have been great to see it utilized on the DS, but the D-Pad does it’s job so I really can’t complain too much.

Graphics/Audio
As far as graphics go, each piece is colored brightly and looks great, as well as the backgrounds blending perfectly into the playing fields to add some extra eye candy. Overall presentation for the menus and the whole game overall was a bit bland though, and yes, it is just Tetris, but I think like some of the reincarnations in the past, this one could have used something to make it feel a bit less generic.

Music in this game makes up for generic visuals in every way. From the classic theme that we all know and love to brand new melodies that are just as catchy and fun to listen to, the music can easily suck you into the game and make the whole experience nostalgic and fresh. 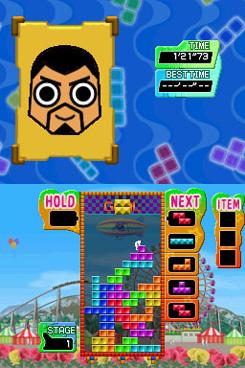 Overall
While Tetris Party Deluxe is a bit simple and is just Tetris with a few new coats of paint, Hudson completely pulled off this reincarnation to near perfection. The new modes are just as fun as the original and there is so much to do I spent hours in each setting playing and trying to rank up high scores and there is so much to do in multi-player, friends can join in and get the same great experience every time. Yes, it could use less generic interface, but consider Tetris Party Deluxe the tribute to gamers who have been fans of the series for years. Adding so many new ways to play while staying true to the original and even going the extra mile to keep the whole classic formula feeling fresh make this the ideal Tetris game to own at the moment.

I Give Tetris Party Deluxe