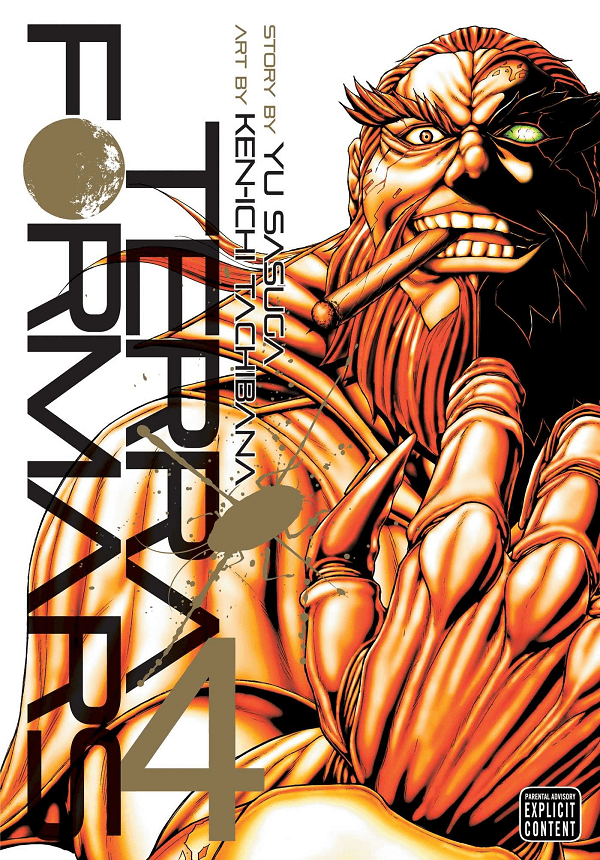 Overview
A virus originating from the Bugs 2 expedition to Mars with a one hundred percent mortality rate has started to sweep throughout the planet Earth. In an effort to find a cure for this virus and save the world, numerous nations have teamed together to send a large force to Mars called Annex 1 where they will try to capture mutated cockroaches and find a cure. However that is far easier said than done as not only have these cockroaches become smarter since Bugs 2, new and extremely powerful variants have already caused the deaths of many crewmembers. With the crew in trouble and facing off against foes they are ill-prepared to handle, what will happen in Terra Formars Volume 4?

Story
It appears that the time for slow paced details have long since passed as, similar to the previous volume, this volume brings readers right into the battle as both Michelle and Akari, two crew members gifted with inherent mutation abilities, face off against two cockroaches unlike anything they have seen before. While there were already oddities with their actions before, the appearance of a cockroach with incredibly strong leg power and one capable of utilizing special underwater abilities catches the already weary fighters off guard.

Separated from the rest of the groups with very little communication between the groups in the first place and a limited supply of drugs to help the crew transform into their fighting forms these new foes make for a more interesting battle than what was previously presented. While the former volume may have been gruesome at times as we saw members of the Russian and Japanese-American teams instantly killed by surprise attacks, there was hope from then on as the surviving members were able to dispatch the normal roaches thanks to the advancements made with the Mosaic Organ Operation allowing mutations such as arachnids, birds, and even sea creatures to be utilized.

There are some brief moments of levity in this volume but it is worth noting that the focus of Terra Formars Volume 4 is the series’ signature bloody combat as we see throughout this volume even this advantage is lost once the unique roaches appear. This is a series that is more than willing to kill off characters that have been given a significant focus so there is always a tense nature to these battles and there are numerous times that readers are led to believe that the officers or one of the crew members is about to meet their fate.

That being said, there are very few developments in the actual plot in Volume 4 as nearly the entire volume features combat between the roaches and the officers. What we are presented with are the abilities of a few of the other squads such as Russia’s Squad and Adolf of Squad 5 as well as an update on their circumstances. Some character details about Adolf and Sylvester are revealed, including their motives for signing up for such a risky project but unfortunately that is about it. Considering the entire surviving crew of Annex 1 is split into six squads, the lack of focus in this regard is a bit unfortunate as readers are left only seeing a small portion of what is happening to the three teams focused on in this volume as the story jumps between them.

One thing that continues to be impressive about Terra Formars is the way that it handles the various descriptions about the base organisms used in certain character’s M.O. Operation. These brief moments of information are not only incredibly detailed but give us some context as to how these abilities work against enemies, especially once they are increased to human-sized proportions. This is especially true for certain bases that may not seem like they would be powerful on their own or are extremely exotic, such as a plant.

While the plot does take a backseat to action in volume 4 it becomes predominantly clear that another creature, be it a traitor amongst the humans or an evolved being leading the roaches, has had a hand in creating these powerful monstrosities. How they managed to do this is still unknown and with how things are left at the end of this volume we likely won’t know anytime soon but we should expect to see the end of yet another powerful member of the team.

Artwork
As usual with the Viz Signature label, the slightly increased size of the volume allows for the details in the artwork to really stand out. Despite the level of combat that takes place in volume 4 the amount of gore is actually the least of all previous volumes. This likely is due to the way most of the human combatants shifting their focus to disabling the roaches, per their objective, rather than flat out killing them but readers can still expect a fair bit of gore on both sides of the fight.

The character designs remain a strong point in the series and this is especially true whenever one of the humans uses the drug to enter their combat form. With the forms now including creatures such as an electric eel and king crab, there is more variation from the bug forms that readers have likely grown familiar with at this point.

Extra Content
The amount of extra content spread throughout Terra Formars Volume 4 is a little thin as readers are presented with only two pages of information concerning four characters that have appeared in the story. Unfortunately since two of these characters aren’t even involved in the Annex project, their details here feels a bit wasted.

Other than that there are also two pages containing detailed information for two creatures that were used as base creatures in the M.O. Operation with the author giving readers some extra facts about the creatures as well as what sources he referenced for the knowledge.

Overall
Terra Formars remains a thrilling read in volume 4 as the new unknown powers of the cockroaches raise the stakes of every battle. While brief, the few jokes and small details concerning a few characters’ pasts are presented which is essential to give readers something of a break from the violence and make the survivors feel human. Of course with the body count likely to rise as the survivors continue to struggle with the new roaches and attempt to figure out how they managed to obtain such power, this development will likely be a barb that will hurt the readers in the future.

While barely any questions were answered in this volume the amount of action and the way that it is presented in volume 4 will be a delight to readers who have followed the series and will likely continue to do so as Yu Sasuga’s bloody story continues to excel in many ways.