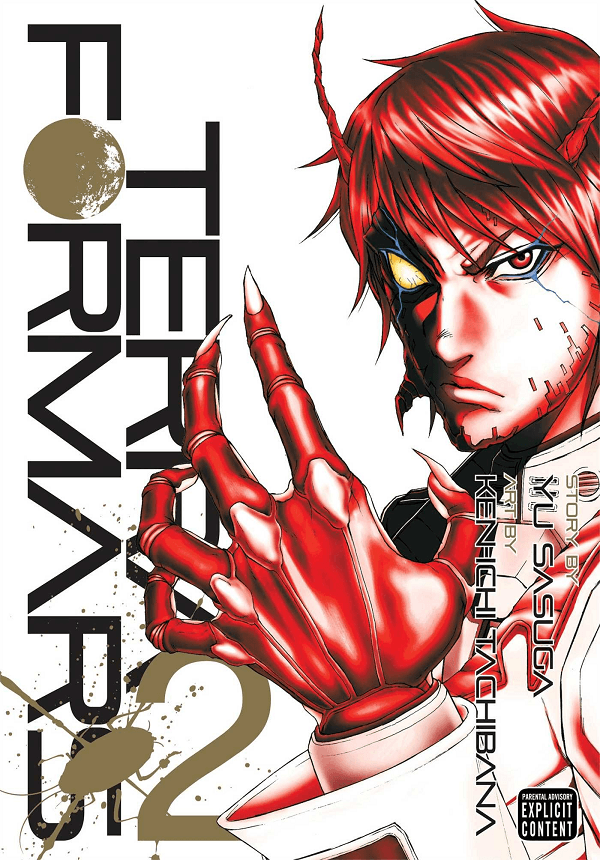 Overview
Usually when a manga is started with what can be seen as a self-contained story, it can be seen as a one-shot with the author hoping the series is picked up by a publisher. However in the case of Terra Formars, the entire first volume of the series told a story that not only introduced the current plight of Earth but also brutally portrayed what is standing in humanity’s way. While Terra Formars Volume 1 may be hard to follow, how does the story continue in Volume 2?

Story
Before I continue it is worth noting that although the first volume does contain its own self-contained arc, there will be spoilers for the events that take place in that volume in this review.

With Earth facing a population crisis, scientists planned to transform the planet Mars into a suitable planet for humanity to colonize. To do this they sent moss and cockroaches to the planet in order to terraform it, allowing the cockroaches to eat the moss, multiply, and die while the moss would use the corpses of the cockroaches to spread across the planet and create an ecosystem that would support life.

Five hundred years passed and in an effort to try and establish a base on Mars, Bugs 1 was sent to see how things have been progressing. When contact was lost, a crew of genetically modified humans was put together to form the crew of Bugs 2 to find out what had happened. With no knowledge of what they were getting into, Bugs 2’s crew found themselves overwhelmed by mutated humanoid cockroaches that towered over the humans and saw them as nothing more than pests that needed to be slaughtered.

With only two members of the Bugs 2 managing to escape the planet, twenty years have passed since the failed mission to Mars. Two members of U-NASA, one of whom is a survivor from the mission, are traveling to Thailand in order to find a special human who was born after the procedure. The reason for this is because humanity is planning another trip to Mars, and this time they are doing it not only with a larger team but to try and put a stop to a virus that is beginning to spread across the world with a hundred percent fatality rate.

Where the first volume of Terra Formars was dedicated to giving us a brief background on the plan for Mars as well as introduce the terrifying power of the mutated cockroaches and the abilities the crew are capable of wielding after the procedure, this second volume serves mostly as a way to introduce the new cast of characters. While one returning character remains at the center of the story, we are introduced to Akari Hizamaru as well as his sad backstory alongside a few of other youths who volunteer to join the crew of Annex 1 which already features ninety other members, five officers from various countries, with our returning lead as the commander, to return to Mars.

Very little action actually occurs throughout this volume; in fact the insect transformations that the procedure gives to those who survive it are barely presented, which means the little factoids are also no longer present. Instead Volume 2 is mostly an intermediary volume that connects what readers already know with the new cast since almost all of the events take place on Earth with only the final chapter actually focusing on space, which will disappoint many who enjoyed the action and mystery of the first volume.

That being said, while it is disappointing that the focus shifts to slower paced character establishment this time around, readers will appreciate learning about the cast, even though the fatality rate of your average character in the series so far is around 85%. It also helps establish the fact that humans are beginning to grow desperate as the world continues to become overpopulated and bleak for those who aren’t well off.

With the final chapter serving as a kick-off platform for the next story arc as well as a major mystery already, albeit one that seems rather ludicrous, readers will be eager to see how things will continue on Volume 3, especially since we have actually had some time to learn about some of the characters this time around.

Artwork
As with the first volume, Terra Formars Volume 2 is being printed in a larger format than average Viz Media releases which helps benefit the detailed artwork that is spread throughout the volume. While the action is limited in this volume, the actual amount of gore when violence does occur is still remarkably high. Whether it is a scene involving a monstrous animal fighting against a human in a steel cage or a first-hand experience at what happens to unprepared humans when the cockroaches appear, the detailed gore is still very brutal to see.

Since this is the first volume we actually learn about characters, it is nice to see a wide range of detailed facial expressions at work from Ken-Ichi Tachibana on these characters since we have more reasons to care about their survival and what they are experiencing other than fear or anger. The various backgrounds throughout the volume are nicely detailed when they are used to portray a new area; unfortunately a large number of the panels are either left with blank backgrounds or low detailed backgrounds. That being said, Viz Media has done a good job translating the series without damaging any of the art as the text is laid over the artwork nicely when it needs to be and considering the number of two-page spreads in this volume, the effort is appreciated.

Extra Content
The only piece of extra content included in Terra Formars Volume 2 comes mid-way through the volume where one page has been used for the “U-NASA Preliminary File I – Cockroaches” page. This page contains various tidbits about average cockroach anatomy and behavior, one of which is actually referenced later in the volume if you keep an eye out for it.

Overall
While Terra Formars Volume 2 takes a break from the blood and gore of Mars to gather together a new cast of characters from Earth, the series still continues to work well as it lays out the ground work for the next major arc. Although the action takes a back seat, the details we learn about some of the new cast as well as the new plight Earth faces serves as a good starting point for the next part of the story, even if it doesn’t make for the same action packed “fight for your life” experience of the first volume.