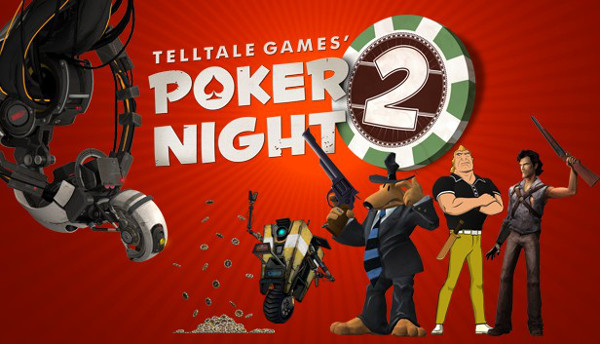 There’s this crazy new game out and everyone’s playing it. Have you heard of a little thing called Texas Hold ‘Em? Oh you have? Clever you. Only one thing makes a game like this worth your time: a deep love of the characters involved and a decent knowledge of how poker is played. Being addicted to unlockable content is going to help a bunch too.

Our erstwhile silent protagonist, Player, has been invited to play at a poker night hosted by video game-land’s most notorious late night haunt, The Inventory. High stakes poker draws in a varied crowd of characters from popular games, movies and cartoons, all trying to out weird each other in a bid to take home the cash. That’s about it for narrative as this game focuses on character above all else, except for cross-promotion maybe. 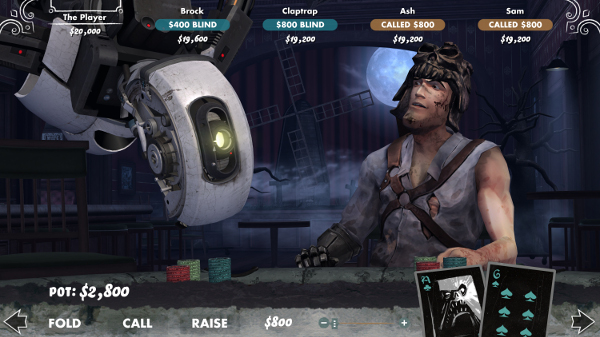 You’ll meet Borderlands‘ Claptrap, Sam of Sam & Max, The Evil Dead‘s Ash, Venture Bro‘s Brock Samson features as the game’s big bluffer and GLADoS is the dealer. Tales from Monkey Island‘s Captain Reginald Van Winslow returns as the host for Poker Night 2. The characters are all pulled off with varying degrees of success. As a massive Evil Dead fan I really appreciated the chin-based humour but unfortunately Ash is the worst character of the bunch. Claptrap remains the acquired taste that has polarised gamers throughout Borderlands’ history. Boring is an understatement for Brock, without his universe around him he just acts like an other one of Patrick Warburton’s super manly characters. Truth be told Sam is pretty useless and GLADoS is as glib as ever. There’s a relationship strung out between her and Claptrap but it rarely garners more than a chuckle.

A core component of this game is unlocking stuff, of which new levels kind of add extra story. It’s less ‘story’ than character-consistent banter in their respective universes. How invested you are in each of these characters is going to determine how much you get out of each of these scenarios. There are some great moments to be found here though the devil’s in the detail. Claptrap dressing up when you play his level, which pretty much consists of painting on a tux and wearing a ridiculously posh hat, is a nice touch. Sam & Max are extremely tame compared to games like Hit the Road, as Sam is the one they chose to play at the table. To be fair, you can’t have Max front and centre but I can’t help thinking that putting such a close-knit pair in a game where only one can play is a mistake. Inasmuch their world doesn’t fully respect the universe they came from. 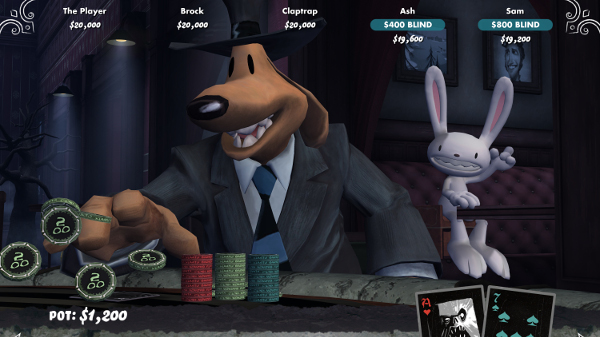 Is there a point where fan service becomes unpalatable? For me there is and being terrible at poker doesn’t help. Genuinely unique opportunities for classic dialogue are wasted here for quick references that die-hards will undoubtedly piss themselves over but leave anyone without a knowledge of the deep lore in the dark. Then again, who’s going to buy a single player poker game that isn’t looking for the trimmings?

I’m not going to go through the mechanic of Texas Hold ‘Em. If you don’t know the rules there’s a tutorial that is reasonably clear but nowhere near as funny as it needs to be. There’s also a four card hand mode for less confident players. Poker Night 2 is heavily stacked in your favour and if you have the slightest idea of what you’re doing you’ll have everything unlocked in a quick session or two. Alas, if you aren’t there’s no way to logically work out how the characters are going to interpret a bluff. Each character is attached to a particular play style, which makes cracking their bluffs easy if you’re familiar with the respective franchises. A choice like this makes perfect sense but the characters present aren’t all conducive to a poker match, which makes you wonder why they included characters so far out of their comfort zone. 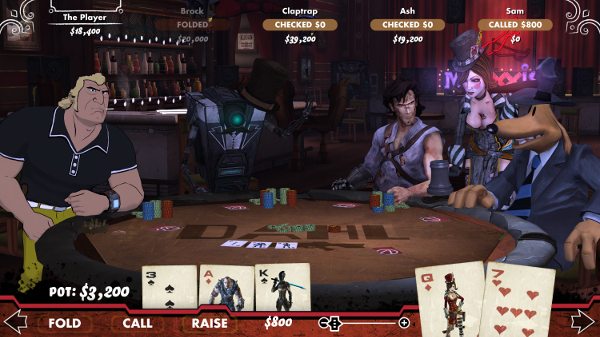 Extra trimmings have been added in order to flesh out the experience but they’re mostly ignorable. Buying players drinks will make them slip up more by giving away their bluffs. I barely noticed the impact on play but I’m sure you’d burn through this game faster if you consistently bought more drinks. GLADoS keeps track of your progress by belittling you when you screw up, which is fair I guess. The flip side to this is that seasoned players will miss some of her better dialogue snippets. Whether that’s a loss or a bonus is dependent on how competitive you are.

Seeing as unlockable items are so ingrained in the gaming process of Poker Night 2 I’ll deal with it as if it were a mechanic. They’re certainly the highlight of the experience and appear to be crafted as the key motivation to play so I think it’s appropriate. Depending on the platform you’ll be able to unlock various in-game items for your library. On Steam you get Team Fortress 2 skins based on the characters included, Xbox gives you Avatar items and you’ll receive themes on the Playstation 3. Each platform reveals unlocks for Borderlands 2, oddly dating the game just as it’s released. Replayability is solely dependent on how many items you want for your characters. For me, that interest was exceptionally limited. Then again, I’m not a hoarder. 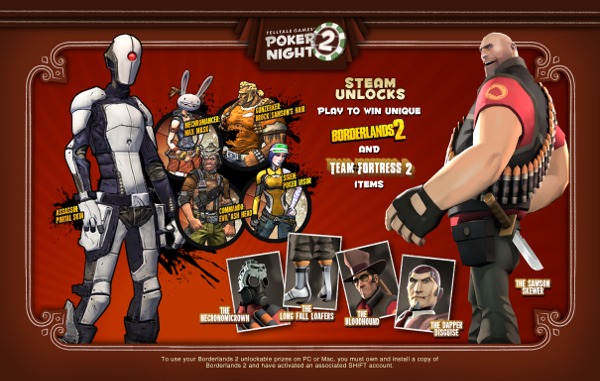 Shockingly, this game plays it exceptionally safe when it comes to the overall aesthetic. Each character is faithfully imported to the game, again highlighting the weird selection process for the developers when including them. Sam, Brock and Ash all suffer from their conversion to 3D animation. Sam and Brock look like they should in a 3D world yet considering how tightly the framing is controlled in-game, surely this is unnecessary. Ash loses all conviction without Bruce Campbell being either the physical or vocal representation. After all The Evil Dead is 90% Bruce, 10% chin with the remainder going to the Ramii brothers. The visual and audio have been treated exactly as you would expect in a game like this. Faithfully, nothing more. 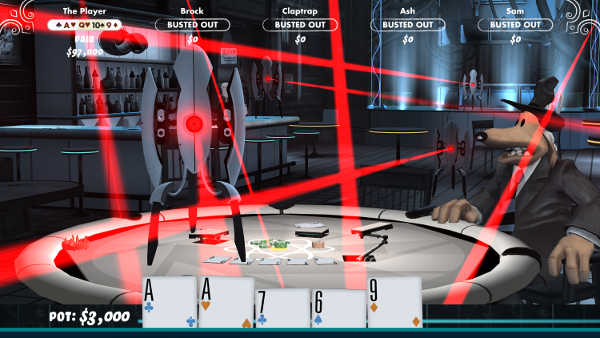 Poker Night 2 feels like a skins pack that included a poker mini game to justify charging $5 for admission. Having said that, this game is fairly priced. This is exactly $4.99’s worth of game. If you love just one of these franchises then you’ll get your money’s worth. Erratic character inclusions hurt the effectiveness of the game, simply because a few of them don’t suit poker. I understand that poker is a great conceit to bring all these characters together and listen to them talk but you have to ask yourself if another poker game is what you really need in your life right now. Even then, there’s a unique depression that goes alongside losing a single player poker game that’s best avoided.