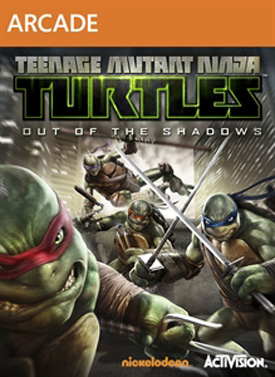 Teenage Mutant Ninja Turtles: Out of the Shadows is a game that I desperately wanted to love (as did many TMNT fans, I’m sure) and on paper it looked like a total success; killer story that combines aspects of the turtles through history, a stealth/brawler action game akin to the Arkham series, and the ability to play as the turtles themselves in a hyper-realistic setting. Unfortunately the game is less than the sum of its parts, and ends up feeling boring, monotonous and just plain unpolished and unfinished. 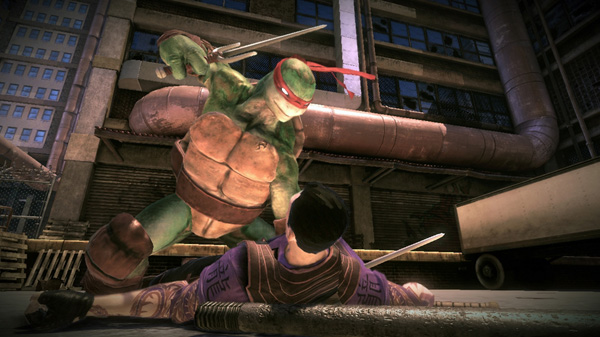 For those who are unfamiliar with the Ninja Turtles (you seriously need to rectify this), they are four turtles who were mutated when a vial of toxic sludge was broken on them. Since their mutation they have grown to the size of full-fledged adolescents. Alongside the four turtles was Splinter; the rat who had once been the pet of a great martial artist. When he mutated, Master Splinter adopted the four young turtles, and named them Leonardo, Raphael, Donatello and Michelangelo. In the sewers of New York City, Splinter trained the four brothers in martial arts, leading to them becoming the Teenage Mutant Ninja Turtles.

The story of TMNT:OOTS follows the four brothers a little ways into their career as the silent defenders of New York. By this time in the story, the turtles have encountered many of their enemies enough times to know all about them. This is great for long time fans of the series, but may ostracise newcomers. The story takes place in its own self-contained universe, but is heavily inspired by the series currently running on Nickelodeon.

The story itself is very much a love letter to the Turtles, featuring characters, locations and enemies spanning across all of turtles lore. In the first few chapters alone, you will face off against the Purple Dragons Gang (notably from the 2003 animated series, as well as reoccurring in the comic books), The Kraang as they appear in the current Nickelodeon created animated series, and the Foot Clan (who have been in everything turtles since their inception). In Out of the Shadows, the turtles are set to find out why the Purple Dragons have been stealing items from the Kraang (known aliens), on behalf of Shredder and the Foot Clan, considering the two organisations seldom have anything to do with one another (in this universe, anyway). 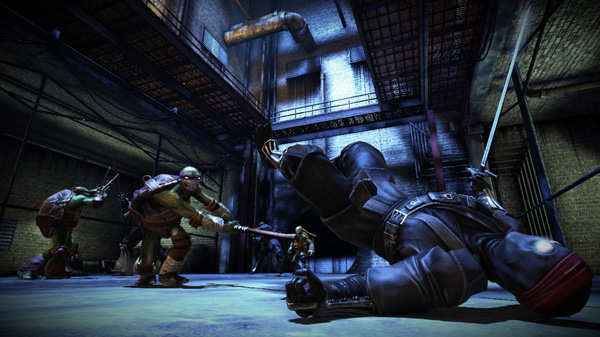 TMNT:OOTS is by and large an action brawler with some RPG elements thrown in. You play as one of the eponymous turtles on a quest to discover what the Foot Clan, the Kraang and the Purple Dragons all have in common. The game has you running across the rooftops of New York, as well as ducking in and out of some of its buildings and alleys, while fighting enemies and unraveling the mystery.

OOTS follows a pretty regular formula for its gameplay; run through an empty section, encounter a group of thugs to beat, run through another empty section. There is very little to mix up the formula here, and even towards the end of the first chapter, many players will find themselves bored. The main reason the game feels so boring and monotonous is that there is no freedom, and nothing to change the pace. The game follows a very linear path, and all paths are void of enemies until you reach a combat zone. The only slight change is Donnie’s hacking mini-game which is required to pass through to some areas.

The game’s combat offers a wide variety of different combo opportunities and attacks. Sadly, while all this is possible, the combat itself just isn’t fun. It doesn’t feel fluid, and the combo gauge unfairly punishes players. There is a split second between having a 14-hit combo streak and having it reset back to 0. In many instances this can’t be avoided, as it takes longer to move from one opponent to another than the combo gauge allows. 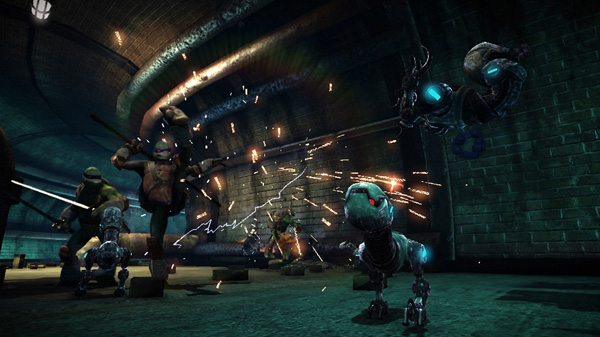 Despite the sheer amount of moves available to you as you progress through the game, the combat is just incredibly boring. You will find yourself using the same few moves on the same enemies over and over again. The way that the enemies move and fall is also stock-standard, with every hit resulting in the same series of movements by the enemy. Even the way in which evil grunts fall down and get back up again is so repetitive you can set your watch to it. There is also no lock-on functionality, so you can easily find yourself swinging at nothing. Modern games like the Arkham series have changed up the brawler combat style, making gameplay that is fluid, distinct and fun to both watch AND play. Unfortunately TMNT:OOTS feels way behind the curve on this.

I also take slight issue with one of the stylistic choices in the game. As in many brawlers you have your strong and weak attacks, and TMNT:OOTS is no different. However, I find it hard to accept that a kick to the chest is more devastating than being hit in the head with a katana blade. Also, for that matter, the fact that the katana blade just knocks out enemies. I understand that cutting up human characters is a risky slope for a franchise like TMNT, but that is why they made the Kraang humanoid robots in the series (the same style of Kraang that appear in the game) – so that the turtles could do ninja-stuff to them like cutting off limbs etc. 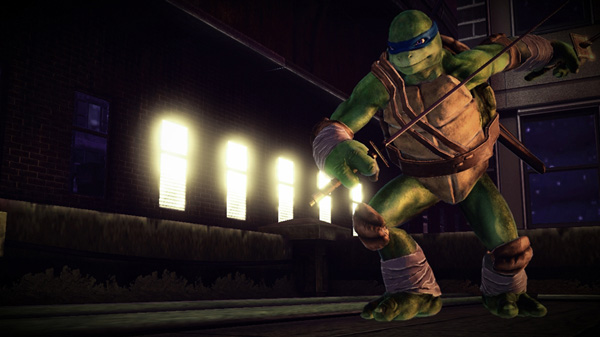 The game does feature 4-player co-op, with all four turtles being on screen at the same time, so you and three buddies can all jump online and play some 4-player turtle beat down. The game almost necessitates this in many areas though, as the AI is a little less than reliable in everything from moving through areas to combat.

During combat you have available to you team combo attacks that are designed to do massive damage. Unfortunately, unless controlled by a human player, it is almost impossible to pull one of these off. When you aren’t trying to pull off a team combo however, the computer-controlled turtles manage to mostly handle themselves alright. Even more frustrating than the team combos are the many sections of the game that bottleneck you into a tight corridor. The turtles all move at a slower pace and frequently get stuck, or more frequently than that get the player stuck as three turtles are trying to head down a corridor made to fit one at a time.

Lastly the game also suffers from an incredible amount of glitches. Everything from audio not cuing when it is supposed to, through being able to clip through a good portion of the walls in the game, and even characters just floating in mid-air as you try to go down the stairs. They all end up making a game that feels unpolished, and like it needed another few weeks in development. 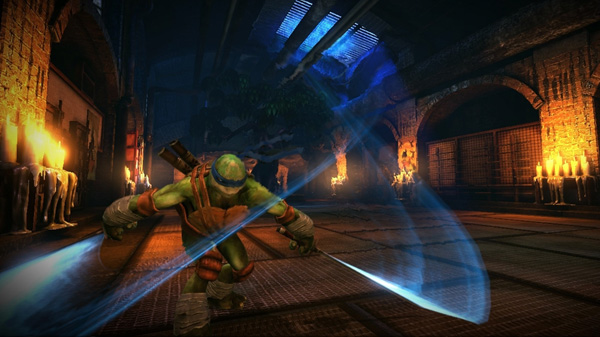 The art direction for TMNT:OOTS was an interesting one. The game goes for a hyper realistic approach. The city, the characters and most importantly the turtles themselves are drawn in such a way that you believe that is how they would look in real life. The approach was interesting considering the success of the current TV series, which goes in the exact opposite direction.

While it is an unusual choice, it is by no means a bad thing, the artwork on the turtles looks almost scary, which is what you would expect from 6 foot tall mutated turtles. The darker, and dare I say ‘grittier’ interpretation is very reminiscent of some of the older comic books, made back before the turtles were aimed at kids.

Sadly, the character models in the game don’t live up to scuff. A lot of them pop out from the backdrops like they were Photoshopped in, even including pixellated edges and sections where the characters are just hovering above the ground. The shells on the backs of the turtles all often look like they are of a low-resolution, and when a good half of your character is in a low resolution you tend to notice. 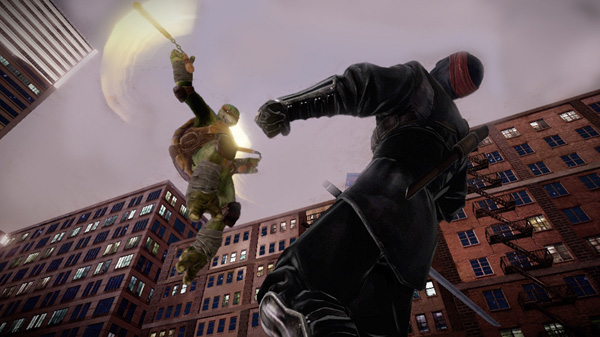 Each of the game’s weapon’s has a unique visual effect that follows it. This effect is dependent on the turtle’s assigned colour; Leo’s swords create a blue effect, Raph’s sais create red, Donnie’s staff creates purple and Mikey’s nunchucku make orange. The effect is one of those things that is cool in theory, but becomes really overpowering and makes it difficult to see what is happening in the battle. This is especially true for the bigger weapon’s like Leo and Donnie, who’s weapons are longer and thus create a larger, more obtrusive wave-effect.

I have spend all this time talking negatives that I am excited to mention a positive. There is a cool visual change that happens when the turtles enter battle. As the battle commences, the eyes under their masks turn from their normal colour into the pure white that fans know and love. It is a slight change, but it goes a long way to make the TMNT stand out from the shadows as imposing forces. 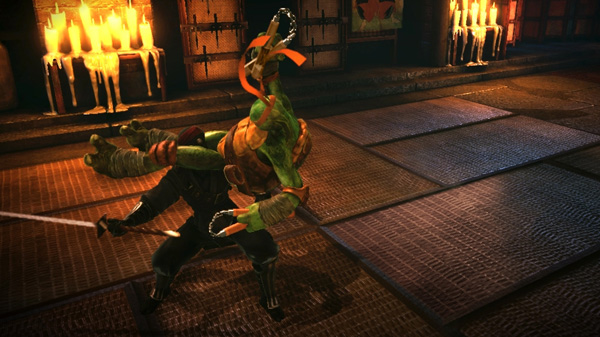 The highlight of the game’s audio is the banter between the turtles in between combat sections. Hearing the brothers talk about everything from philosophy to last night’s pizza gives the game a real turtles feel. However, fans of the series will dislike a lot of Raph’s dialogue, as he feels very out of character in many conversations, sometimes even being the comic relief over Mikey. Another thing of note in these conversations is that many are hijacked by Donnie and Mikey. This isn’t a bad thing however, as the intellectual Donatello and the carefree Michelangelo make for some great back and forth, often highlighted by Leonardo’s wisdom and Raphael’s stubborn arrogance.

The voice cast for this game is all entirely new, with no one reprising their roles from previous Turtles media (not even Nolan North, who voices The Kraang in the show, and is in pretty much every video game ever made). Despite this, all of the actors fit their roles perfectly, I believed that Mikey was Mikey, Leo was Leo and Donnie was Donnie. Raph’s voice worked for him, but as mentioned above, his dialogue was not always befitting of the Raph we know and love.

While the banter between the four brothers is a definite highlight of the game, the same doesn’t extend to the in-combat dialogue options. The turtles and the enemies they are facing will all fire off quips and remarks as the battle ensues. This in itself isn’t a bad thing, the problem arises from the fact that you will have heard all of the quips within the first battle, making the rest of the game’s combat sequences sound as repetitive as they feel. 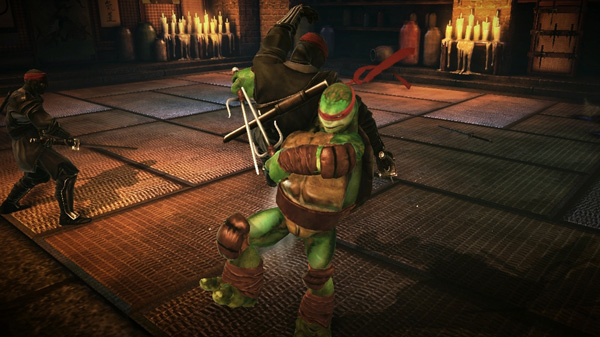 As someone who grew up watching the ‘heroes in a half-shell,’ I really, really wanted to like TMNT: OOTS, and to see them headline an awesome game for the first time in a long while. Sadly, Out of the Shadows just isn’t that game. Sure it had all the right elements; a killer story that serves as a love letter to Turtles fans young and old, multiplayer co-op, the Foot Clan, on paper it should be a masterpiece. Unfortunately the problems with the game all lie in execution; cumbersome menus, various glitches, visuals that aren’t up to scuff, and gameplay that is boring and repetitive all result in a turtles experience that just feels unpolished and incomplete. Sorry turtle fans, no cowabunga this time.