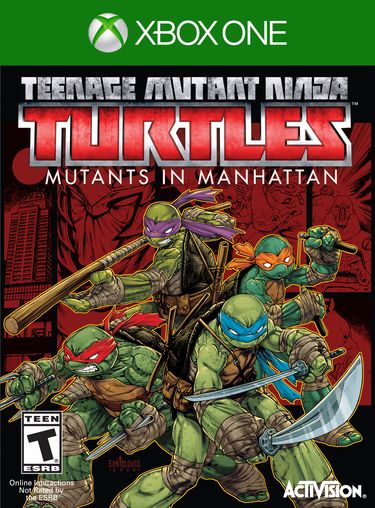 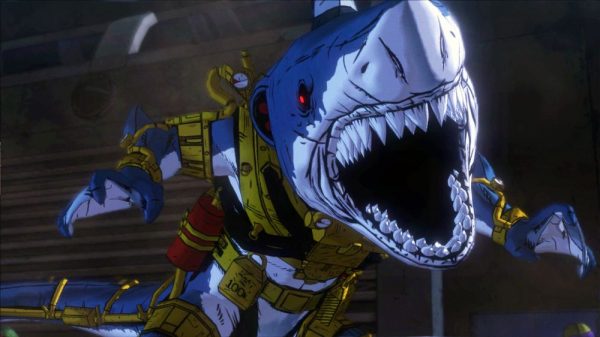 Teenage Mutant Ninja Turtles: Mutants in Manhattan follows the four brothers on an adventure to stop Shredder and Krang as they team up to invade the city. Some of the franchise’ classic enemies make appearances as bosses in the game, giving the title a big shot of nostalgia. Unfortunately, the nostalgia is really the only thing that makes the plot enjoyable. The writing is wooden, repetitive, and completely predictable. 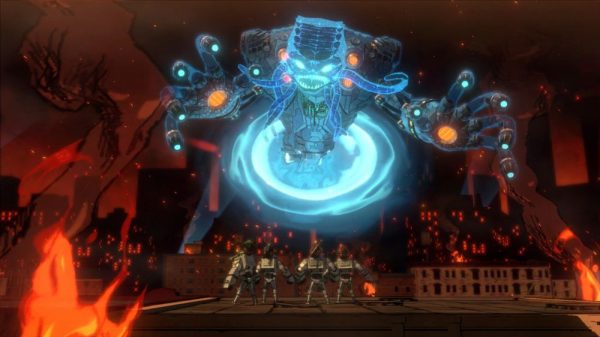 Teenage Mutant Ninja Turtles: Mutants in Manhattan is first and foremost a third person hack ‘n slash in the same vein as previous TMNT games. The game is available in single player story mode and multiplayer co-op. Both modes are separate from each other, with the only thing that transfers between the two is any progression made on the characters themselves. Players are rewarded with loot and experience as they complete levels. Each brother can be equipped with a charm that will award some sort of buff. As the difficulty of the game rises, more charms can be equipped. Experience points are spent on improving skill levels, with more skills being unlocked as the player levels up. The system is not particularly complicated, but it does give a little bit of progression to the game. Unfortunately, it feels a bit pointless because the game is painfully short. 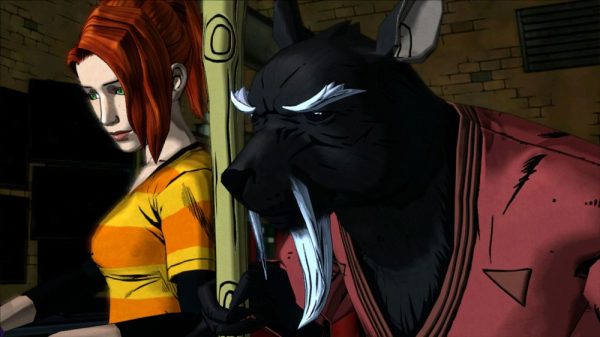 There are only nine levels and four difficulty settings in the game, with the final difficulty setting only unlocked when the game is beaten on hard. Each of the nine levels are incredible short, set on open world maps that have little life and lots of empty space that needs to be traversed between objectives. The objectives are incredibly boring, with little creativity and variety. On normal, levels can be easily completed in 15 minutes or so. By the looks of it, PlatinumGames was banking heavily on the leveling system for replayability, but the game is so incredibly dull that it is rather pointless to replay the game. 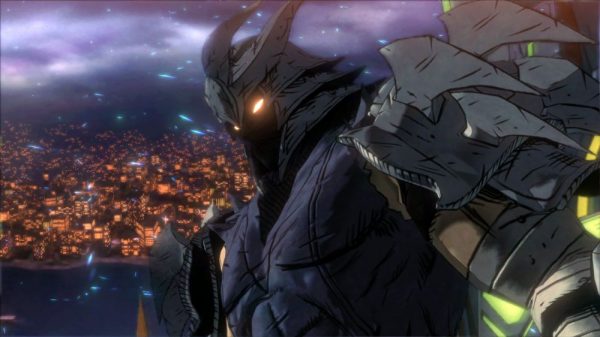 The combat system is a mixed bag. The controls feel tight and responsive, and I would expect no less from a developer with a long list of hack ‘n slashes under their belt. However, the combat itself is pretty repetitive and boring. For starters, each of the four turtles are supposed to have their own fighting style. For the exception of Raphael, the remaining three really end up feeling the same. There are a wide variety of one time use items that can be used in game, but most end up feeling quite useless compared to the regular attacks. The most interesting thing about the combat are the variety of special co-op moves with cooldowns, as there are a good number to try; however, the novelty runs out pretty quickly once players find four or five core skills they will most likely stick with all the time.

There is some attempt at stealth mechanics in the game. Raphael especially excels at stealth kills, allowing players to sneak up on an enemy and execute a quick one shot kill. Frankly, it is a pretty unnecessary feature that feels tacked on last minute as it is only useful for picking off one or two enemies that randomly spawn outside missions or starting combat. The objectives that forces players to complete stealth kills are just plain annoying due to the simplistic mechanics. 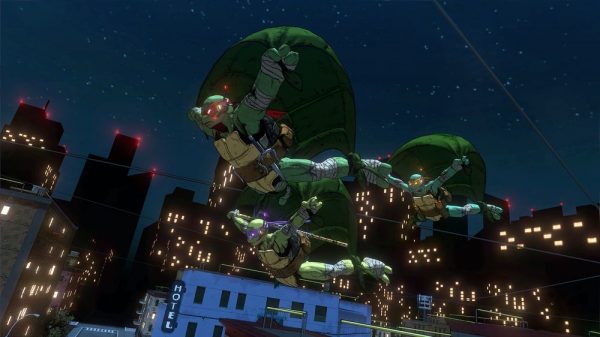 There are a small handful of enemies to fight, each with their own abilities. For the most part, the abilities don’t really matter as they are all pretty squishy to close range attacks. The AI is pretty atrocious. For the most part, they will brainlessly run towards the objective or the closest turtle. The AI pays little mind to anything in between, happily running into solid walls endlessly until they are killed by the player.

The multiplayer system is a pretty clunky affair. Players need to create a room, choose a level, wait for others to join, select their characters, and then begin. It seems to be pretty silly to not have a drop in/drop out system these days, which would have made for a much smoother and more enjoyable experience. 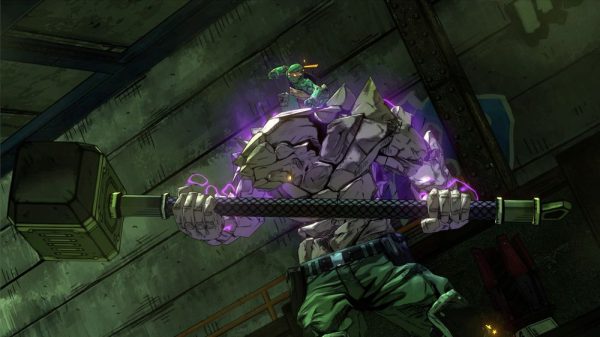 Teenage Mutant Ninja Turtles: Mutants in Manhattan is done in a really nice cel-shaded art style, paying tribute to the franchise’s comic book roots. I really like the comic book style frames used at the end of each level to showcase the possibly embarrassing poses players may find themselves in. The cinematics look good, though they are noticeably fuzzy compared to the in-game graphics at 1080p. The combat animations are pretty nice, though the game seriously struggles with characters clipping into objects. The silly looking co-operative lifting animations are worth a special mention, with all four turtles getting a grip on the object and bouncing up and down in “effort” for several seconds. 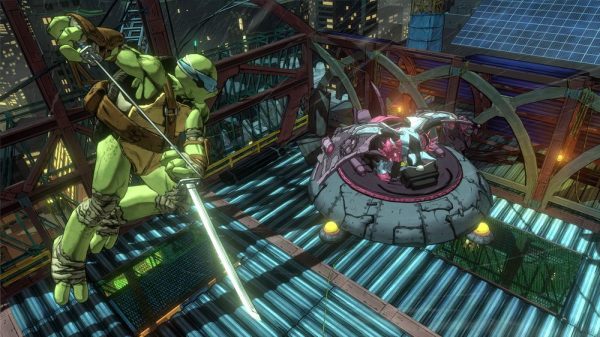 The voice acting in the game is decent. It won’t win any awards, but to be fair it is pretty in line with the quality of voice acting in the rest of the franchise. The sound effects are good, with a nice bit of impact behind attacks. The biggest problem with the audio is sheer repetition. The soundtrack is a bit on the short side and the number of lines the voice actors were able to record are painfully few. 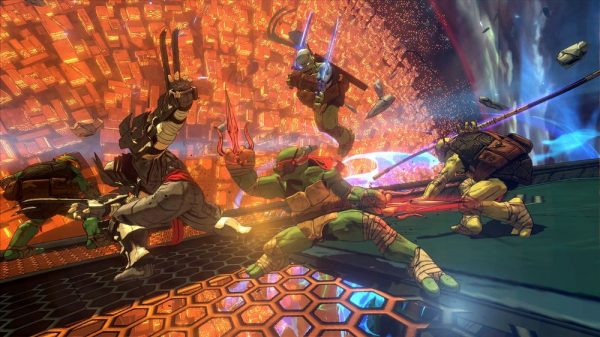 Teenage Mutant Ninja Turtles: Mutants in Manhattan is a repetitive and bland disappointment. The short length of the title takes out some of the sting out of the repetition, but there is no excuse for a game to be this short at this price point. The AI is a boring mess and the maps are lifeless. In theory, the game has a ton of potential for co-op play, but the clunky room-based system is an unnecessary pain. The cel-shaded homage to the old comic books is probably the best the game has to offer, but even that is crippled with fuzzy cinematics and a lot of clipping. My hopes for Teenage Mutant Ninja Turtles: Mutants in Manhattan to be a hack ‘n slash classic for a brand new generation of gamers has officially been dashed.

Those expecting the second coming of Teenage Mutant Ninja Turtles: Turtles in Time will be disappointed; Mutants in Manhattan is short and bland.
4.5