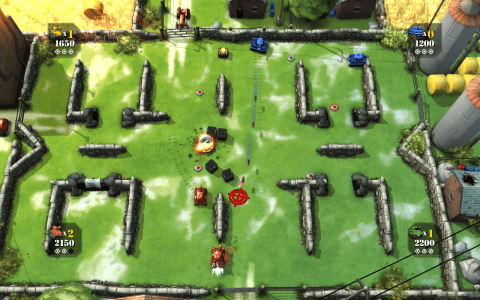 Overview
After some enjoyable success on the PlayStation Network and Xbox Live Arcade, Gameloft’s simple arcade multi-directional tank shooter Tank Battles is now seeing a release on the Apple Mac App store. Drawing heavy influence from the Atari 2600’s Combat, with a whole bunch of cool power ups thrown in. While the combat itself can be quite shallow, Tank Battles is presented beautifully, and the chaotic and hectic gameplay and extensive content should keep most entertained for quite some time. 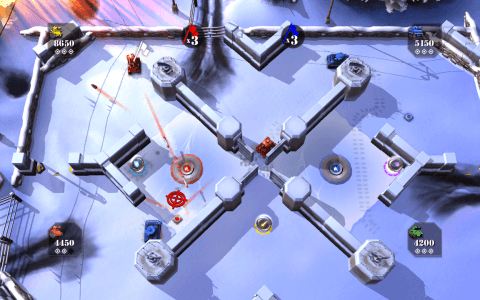 Presentation
Tank Battles is a very polished and beautiful looking title, and it’s presentation is almost flawless. From the gameplay itself to even just the menus, everything about Tank Battles is filled with loveable character and personality. Even if the mechanics of the game doesn’t engage you, most likely you’ll at least be impressed by its presentation, as this game has been given some very attractive polish. The conclusion of each battle is a highlight, sporting a victory theme and attractive font and stats, similar to what you’d expect from Nintendo’s Super Smash Bros franchise. The best part of Tank Battles however is it’s surprisingly huge amount of content. While it only has 3 gameplay modes, it has an outstanding 50 maps, and most of them are varied out nicely so you won’t get too bored with them. Solid effort! 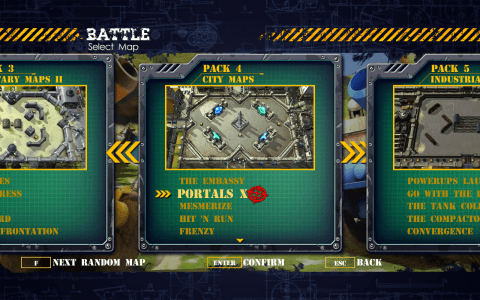 Gameplay
Tank Battles is a very simple, casual, pick-up-and-play game, which probably won’t appeal to your average hardcore gamer, which is a shame as Tank Battles can be quite fun. You might not of guessed this, but the object of Battle Tank Battles is to battle in a tank with other tanks. You’re thrown into an arena with three other tanks and you duke it out to the death, and the soul survivor wins and gets a nice fanfare. 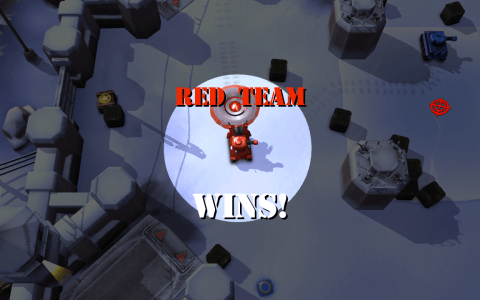 There’s campaign mode is disappointing because its just a list of battles one after another until the end with no special objectives or storyline to make it any different from campaign mode, but it does give you the option to play it with a friend which is great, because the heart of Battle Tanks is it’s multiplayer which can be played both online with 4 people and locally with 2. There is a nice selection of power ups that come into play ranging from upgraded weapons to various forms of defensives, and with arenas including all sorts of twists such as conveyer belts and portals as well as land mines covering the place, a game can get pretty chaotic pretty quickly, providing an action-packed, fast-paced thrill ride which is best shared in multi-player. The chaos is further amplified by the fact that bullets can rebound of walls, so a little bit of strategy can come into play, although most of the time you’ll rely more so on reflexes than tactics. 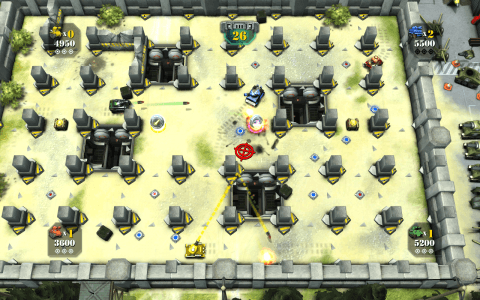 Using your keyboard you move your tank around a field and drop land mines from a very Bomberman-styled birds-eye view, while aiming and firing your tank using either the keyboard or the mouse. The controls are very customizable, which is very useful and allows all types of gamers their own style of play, and even gives you the choice of using a gamepad, a nice addition. This is a great example of the entire package of Tank Battles-many nice additions included to make such a simple game engine appear more interesting than what it really is, which actually works well as the amount of time you’ll spend playing Battle Tanks is extended by exploring the wide range of 50 varied arenas while exploring different game types in battle mode and playing through the campaign, without feeling artificially dragged out. So if you enjoy the game, you’ll most likely spend a long time playing it as there is a lot of content to be explored. If your not a fan however, it won’t take long for you to realize that simple gameplay mechanics often means shallow and repetitive gameplay, and most likely you’ll just be playing it in short bursts rather than sitting down for long periods of time rather than having a fully engaging gaming experience. 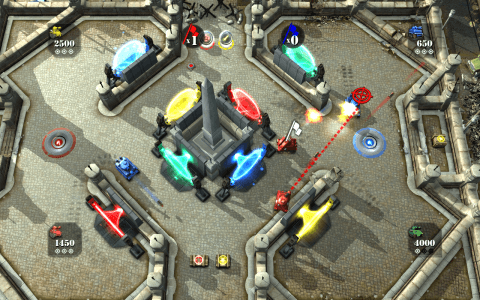 Audio/Visual
Like the gameplay, Tank Battles’ graphics are quite simple. That isn’t to say they’re not good though. Battle Tanks is vibrant, bright and full of color, personality and charm, and is a pleasure to look at. Although you’re driving around in metallic god-fearing death machines, everything feels warm and looks pretty. The sound effects are decent, although the firing of bullets could’ve been better. The soundtrack is appropriate with patriotic trumpet fanfare throughout, with an upbeat vibe suited well to the gameplay, resulting in a fun, enjoyable atmosphere. 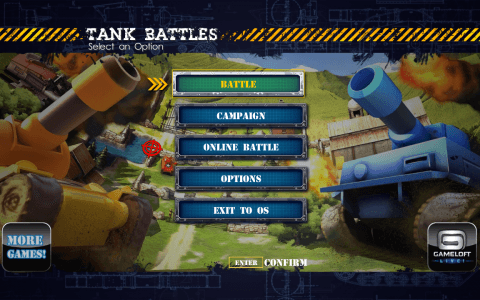 Conclusion
There have been a million games like Tank Battles in the past, and this title doesn’t do much to stand out from the pack, however, I’d say that this is easily the best multi-directional tank shooter I’ve played. The reason being for this is its remarkable polish and presentation. The game looks and sounds fun, so you have fun while playing it. The simple controls are likeable and provide a great multi-player experience, which is enhanced by it’s chaotic and hectic, fast-paced gameplay, and its impressive amount of maps will keep you playing for quite sometime. However, Battle Tanks is brought down sadly by its genre, as like most multi-directional shooters, gameplay can feel too simple and shallow, and can get very repetitive very quickly, especially if your playing alone. If your looking for an engaging, hardcore action title that’ll entertain you for months I’d suggest looking somewhere else, but if you’re a fan of the genre, Tank Battles is easy to recommend.