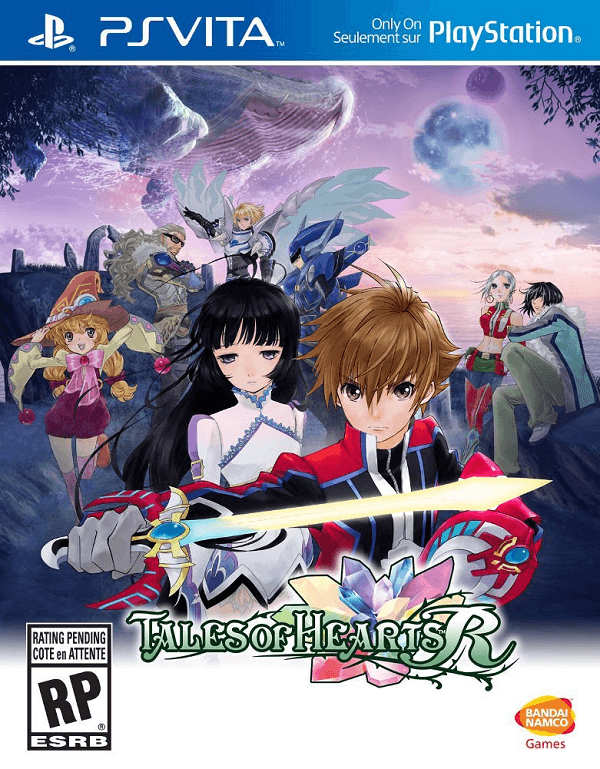 Overview
Over the last few years, nearly every JRPG announced for release in Japan has managed to make its way overseas, regardless of how niche it might be. As such thinking that an established franchise such as the “Tales of” series would pass up a worldwide release is more than surprising. However back in 2008 and the year prior, a number of Tales games did not see a Western release in any form. Now with Tales of Hearts being remade for the PS Vita and Bandai Namco listening to fans of the franchise, Tales of Hearts R has been released in the West.

Story
A young girl named Kohaku and her brother Hisui are on the run from a witch and while they are trying to escape, they manage to find their way to an isolated village where the oddly named Kor Meteor lives and trains with his grandfather. When the pair arrive in the village, Kor manages to help Kohaku and Hisui fend off the witch’s attacks but in the process his grandfather is murdered and Kohaku’s “spiria” is heavily damaged, causing shards of it to scatter around the world. 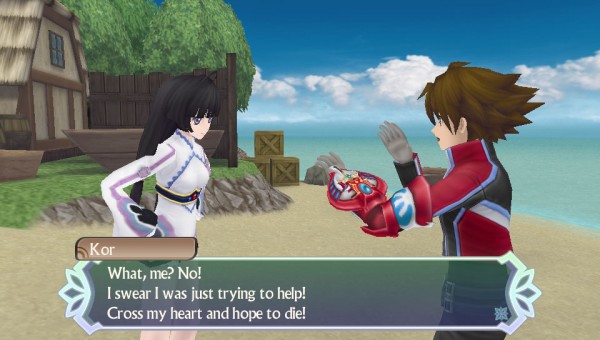 A spiria is basically a crystal like item that holds the emotions of the owner and can also be used to power weapons called “Soma” which is one of the few methods to defeat monsters which have begun flooding the land. Since Kohaku’s spiria is now shattered,Kor joins up with the two in order to restore her personality by tracking down every piece and making a number of new allies along the way.

Somewhere along the line however it becomes apparent that there is much more going on to the story than a simple fetch quest and Kor and the rest find themselves on a serious mission with the fate of the world in the balance. I will admit that Tales of Hearts R is one of the slower starting games in the series as it does take a while to pick up the pace but thankfully it does ramp up as the story progresses and begins to reveal more about the world. 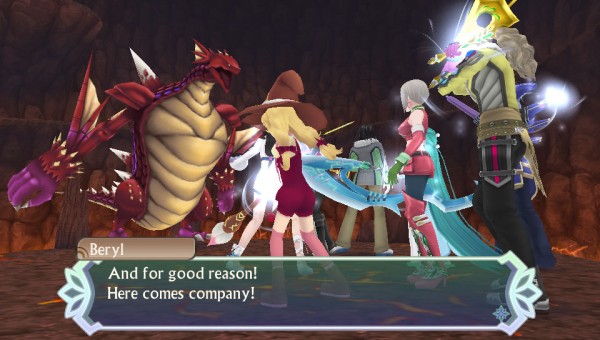 As with many Tales games, the characters are initially identifiable by their basic tropes but unfortunately, unlike most other Tales games, Tales of Hearts R does a poor job managing a number of the characters you find joining the party. There are some interesting developments made over the course of the game for the cast and seeing Kohaku go from her previous self to an emotionless shell and back is interesting, but it feels like it is far too little for a series that usually boasts a strong cast of characters.

Gameplay
Much of Tales of Hearts R’s mechanics will be familiar to longtime fans though the combat and leveling systems have been changed up this time around. As usual, players will enter a battle where they can move freely on a battlefield if they wish, but generally charge in a straight line towards the targeted enemy. You may make use of basic attacks as well as Artes (skills) to deal damage to your foes and this time around you can easily chain together numerous combo attacks using basic attacks and Artes. 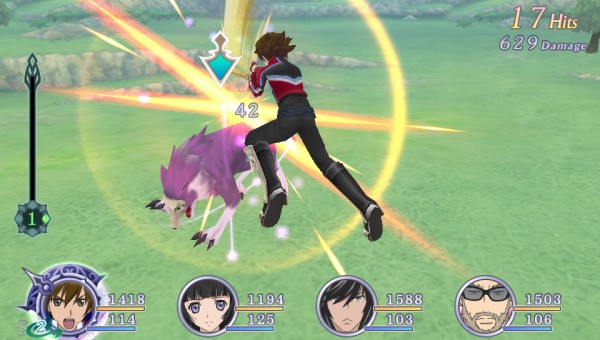 One thing that has been added to the game is a chase link system where players can unleash a powerful slew of attacks after launching an enemy into the air and even trigger linked attacks with party members during these chase links. This makes the fast paced combat even more enjoyable than before and thanks to a system that allows players to completely customize how they want their AI partners to fight, you will find yourself fighting alongside highly skilled party members that will react to situations exactly how you want them to without a second thought.

As mentioned earlier, the level up system has also been refined to allow players to craft characters to best fit their play style. Every time a character levels up the player can distribute these points to various parts of their Soma, increasing the damage they do and usually unlocking new Artes in the process. Combined with the aforementioned AI modifications, the amount of customization in Tales of Hearts R is a pleasant surprise. 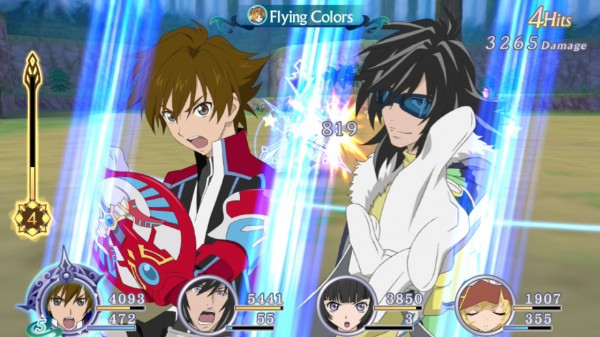 What isn’t pleasant however is the fact that for whatever reason, Tales of Hearts R has reverted back to the ancient random encounter system. Unlike other titles where you will run into enemies on the field, you will now randomly be thrown into combat against enemies as you explore. There are ways to lower the encounter rate through items, but random encounters end up being an unwelcome blight that is only alleviated by the fun and enjoyable combat system.

Visuals
Tales of Hearts R has reworked from the ground up over its original DS release but at times it really doesn’t show it. While the designs of the towns you venture through and the character designs are impressive looking, the same cannot be said for many of the dungeons and areas you will venture through. 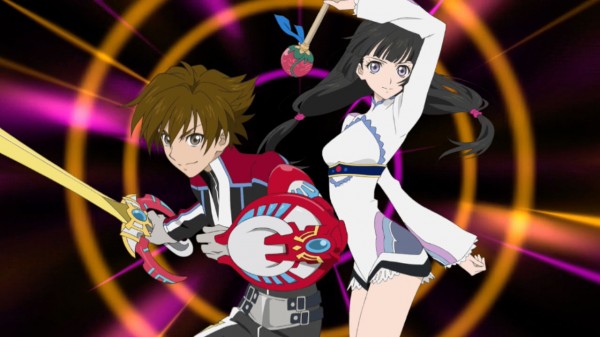 Many of the dungeons are straightforward affairs that offer little exploration and are some of the blandest you will find in a JRPG but there are a handful of memorable looking areas that try to make up for it. At least the enemies you encounter will have a decent amount of variety, which also helps alleviate the annoyance of random encounters.

Audio
Now unlike almost every other Tales release in memory, Tales of Hearts R does not feature an English dub and instead relies only on the original Japanese voice track. This isn’t a major issue however as it does sound quite natural at times and practically the entire game is voiced thanks to this decision. There are a few moments where the Japanese voice work seems to contradict what is being shown in the localization texts, such as how the main character’s strange localized name Kor is still said as the Japanese version’s Shing and a number of English phrases thrown in from time to time, but for the most part only those with some awareness of the language will probably catch most of these issues. 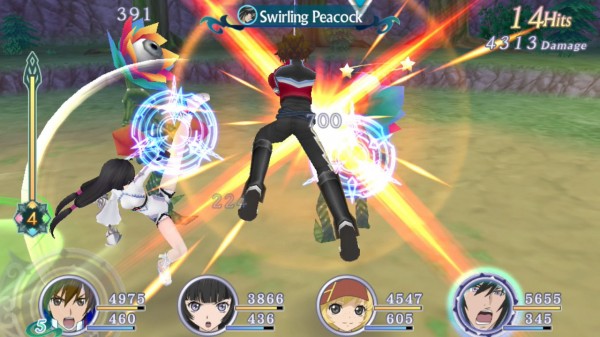 Unfortunately as far as the background music goes, there really is not much to be said about it due to the fact that the music is relatively bland and uninspired. There are a couple of decent tracks mixed in with the soundtrack but sadly none of the music will be memorable, especially the opening video for Tales of Hearts R has been stripped of its vocals and is now an instrumental only version.

Overall
Sporting a satisfying story that is held back a bit by some poor character development, Tales of Hearts R is makes for a satisfying game. The new combat mechanics and customization aspects improve the already enjoyable combat system though the forced random encounters and uninspired dungeon design may leave players putting the title down from time to time to avoid being burnt out on it. Perhaps the fact that it was always designed for a handheld console is something of a blessing as Tales of Hearts R still offers an enjoyable experience, just one that has a number of flaws.