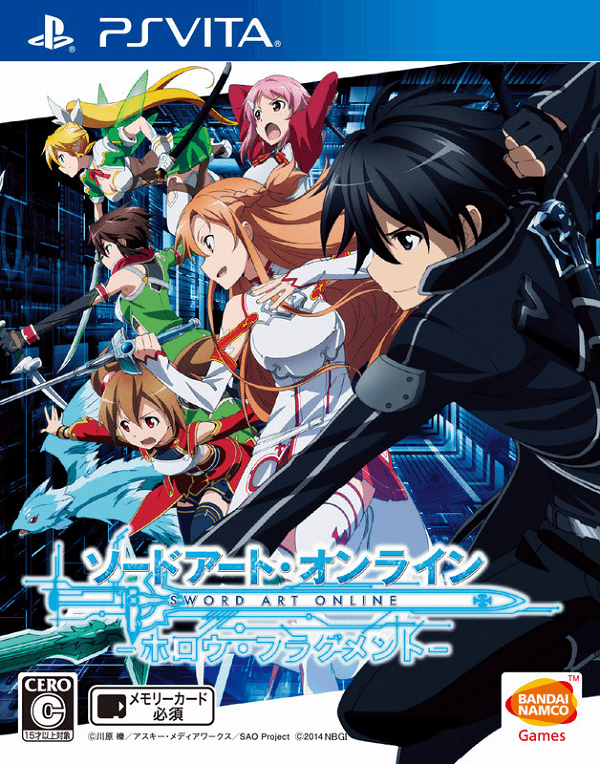 Overview
Games based on an anime series have become a rarity in the West. Unless they are based off of Dragon Ball Z, Naruto, or Gundam, these titles rarely are brought over in English. However, perhaps thanks to its English run on television and the fact that the light novel is also being translated and released in English, Bandai Namco decided to bring Sword Art Online: Hollow Fragment over for Vita owners, and fans of the series to enjoy. However, is this title actually worth owning?

Story
Now before we get into this review, it should be worth noting that familiarity with at least the first fourteen episodes of the Sword Art Online anime series are required to actually get much enjoyment out of the storyline and the characters that populate Hollow Fragment. Also it should be noted that those who haven’t reached that point should expect some series spoilers from here on out. 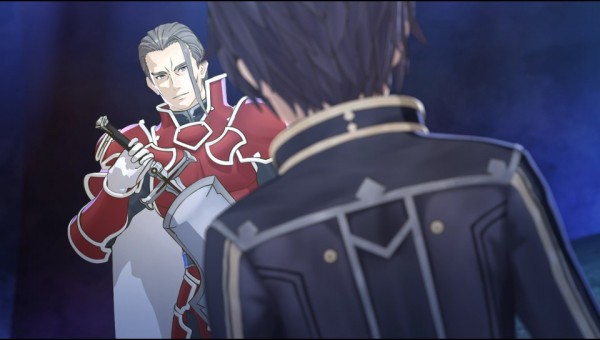 Sword Art Online: Hollow Fragment does give players a chance to refresh their memory with a very brief rundown of events only to pick up during the battle between Kirito and Akihiko Kayaba, the owner of Sword Art Online who trapped every player in the game where death in-game means death in real life, on the 75th floor. While Akihiko promises that if Kirito defeats him, he will allow everyone to escape from the game alive, the story in Hollow Fragment deviates at this point.

Although Kirito manages to win the duel, a system glitch suddenly makes Akihiko disappear, forcing the players to continue their journey in SAO and advance to the 76th floor. Once the group arrives on the new floor, they find that not only has Leafa, from ALfheim Online, but also Sinon, from the just barely introduced Gun Gale Online, have managed to be transported into SAO for whatever reason. 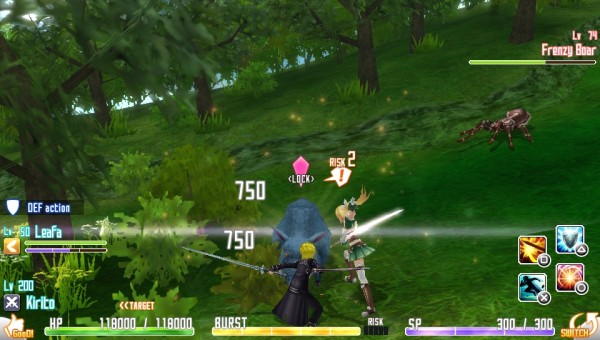 To make matters worse, Kirito finds himself transported to an unknown area where he encounters a new girl named Philia who is being chased by a powerful floor-boss that has been given a significant drop in stats, allowing the two to best the creature. After talking with Philia, Kirito learns that this new Hollow Area appears to be outside of the standard system and not only can players explore this area, but they must also reach floor 100 to finish the game.

To be honest, the story found in Sword Art Online: Hollow Fragment is far from special, in fact it is rather lackluster at times, but it does give fans of the show more character development and time with some of their favorite characters as well as experience unique character events for the many female characters that populate the story. 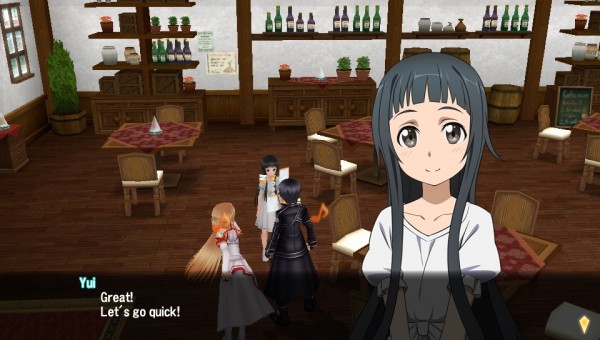 Now, while not directly story related, this issue does affect a lot of the time players will spend reading what is happening and interacting with characters. The issue I’m speaking of is the fact that Hollow Fragment has been given an absolutely terrible English translation. Players will be lucky to read through four or five lines at a time and not notice a grammatical error or a completely incorrect translation error. While this issue can be a bit funny at times, simply because of how ridiculous some lines read (though this might also be due to bad writing in general), it is an issue that should have been addressed before the game was released, especially since some mistakes are incredibly obvious.

Gameplay
It is interesting to note that players have a few small customization options provided to them at the beginning of the game to give Kirito a small make-over, including a name change, but for all intents and purposes the game not only describes Kirito as he usually looks but continues to use that name everywhere in the story, even menu screens. 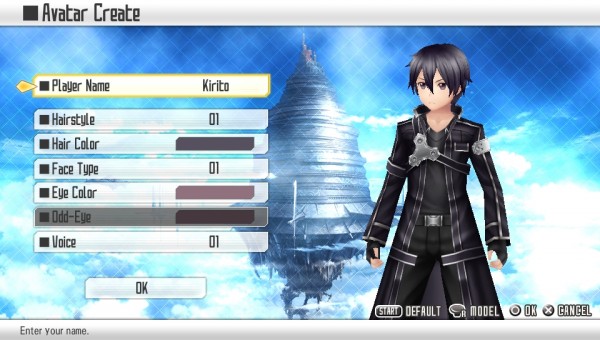 That being said, everything in SAO:HF has been designed to give players an MMO style of gameplay despite offering zero online capability. As players travel through their chosen area, they will encounter enemies wandering around the field where they can then be fought with using a somewhat complex method of attack that takes a bit to get used to. Players will automatically perform normal attacks, though combos and Burst Attacks can be activated and various skills that use SP can also be performed for added damage, healing, etc.

Since players can bring one ally with them, either one of the many main side-characters in the game or even random characters they have helped in the past, your partner will occasionally call out for specific skills or actions to be taken which usually results in a powerful combination attack. It is also worth noting that the game features a Switch system that allows players to swap “aggro” with their ally to avoid taking damage and recover their Burst meter, which is used for combo attacks and is slowed when the player has a high “risk” level. 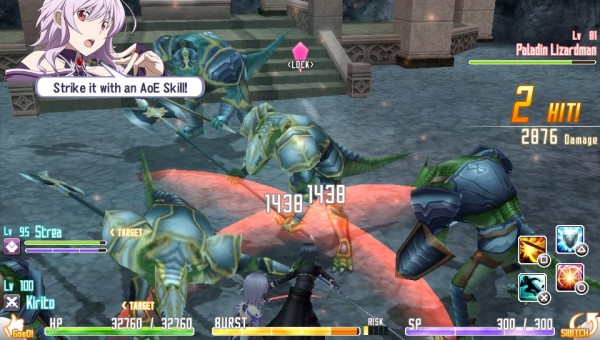 Although it is complicated, due in part to the amount of skills available at any given time and the limited control scheme, the combat system is also perhaps the best aspect of the game unless you happen to be in it for the characters. While Kirito starts the game dual-wielding swords, his skills change depending on his equipment set and thanks to the limited amount of SP available at any given time, finding a balance between using skills, working with your partner, managing your stats, and dodging or parrying attacks make many of the battles, especially those that take place in Boss rooms, an exciting experience when you aren’t battling against the game’s terrible camera system.

Outside of combat, players will be spending their time exploring the world and advancing up each floor, exploring the Hollow area in an effort to find better equipment and see new events, and hanging around the hub town of Arc Sofia. The town of Arc Sofia is populated by countless NPCs wandering around the town, many merchants selling equipment and items, as well as story characters that players can interact with. 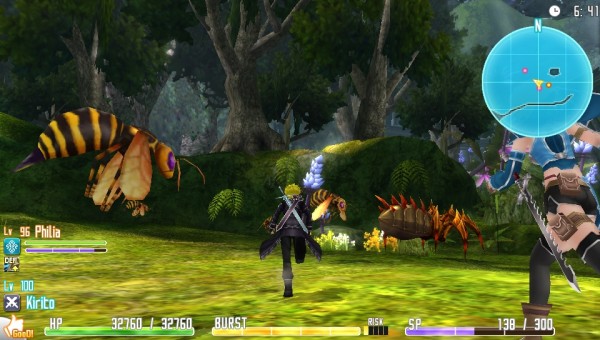 As mentioned earlier, there are plenty of girls in SAO and all of the main girls, including the new original ones, can be interacted with and there are some basic dating elements in the title. Players can engage each girl in mini-conversations that string together terribly translated phrases that make no sense whatsoever that players can press one button to reply to and increase their affection to unlock various bonus scenes.

Visuals & Audio
It is worth noting that although Sword Art Online: Hollow Fragment has been released on the Vita, many of the original assets come from the PSP game Infinity Moment and have simply been upgraded for release on the Vita. This means that although many of the in-game cutscenes and the character portraits are crisp and impressive looking, the actual in-game character models suffer from jagged edges at times and the environments tend to become repetitive very quickly. Also, alongside the aforementioned translation issues, the title tends to suffer from drops in frame rate when exploring Arc Sofia due to the amount of NPCs that appear around you. 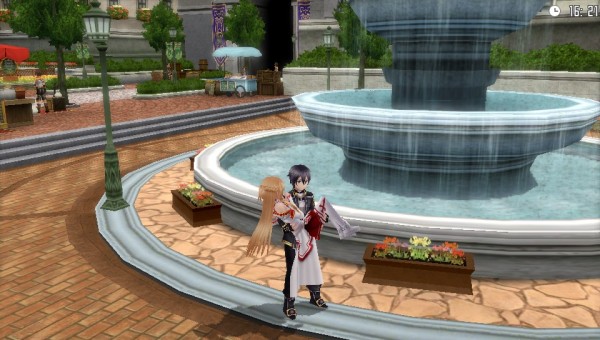 One thing that is a nice touch is that almost every dialogue sequence in the game is voiced and the voice actors from the anime series retained their roles in the game. Although this release only comes with the Japanese voice work, it probably is for the best due to most of the series’ popularity being derived from the anime.

Overall
Sword Art Online: Hollow Fragment is a fun but flawed game that offers a complex yet satisfying combat system and plenty of content for non-fans while fans of Sword Art Online will be able to see a different side of the story while also enjoying their time, and fanservice, with their favorite girl or girls. Unfortunately, the story never really steps into any special territory and it really doesn’t help that the game’s translation has been handled terribly. Despite that, fans of the series will likely be happy to overlook these flaws in favor of the game’s hefty amount of content.