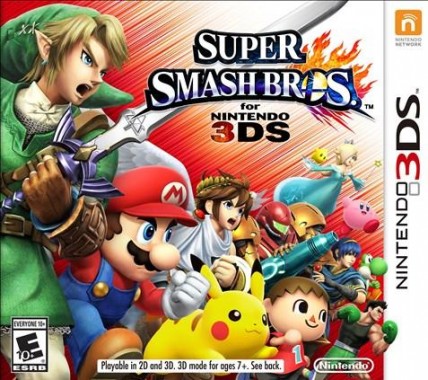 Overview
Since 1999, Nintendo have brought together a great number of franchises in one package with Super Smash Bros.. We have seen two sequels since, and with a new generation in full bloom – the fourth installments have hit the world running. For the first time on a portable, Super Smash Bros. for Nintendo 3DS brings together a large roster of combatants with several returning faces and features. Sure, it may be on the go and retain the same name, but does this entry warrant a purchase, or is this a handheld debut to ultimately pass on? Let’s find out.

Gameplay
Its really odd having to describe the gameplay of Smash Bros. to a newcomer. Its kind of like describing walking, talking, or running. I have always had a great fondness for the series, as sure – its a fighting game, but it is also so much more. The 3DS version has a lot of weight to live up to however. Not only did it have to capture the console experience, but it also has to bring enough new to the table to satisfy the flocks of fans who have drooled over every screenshot during the past two years. Thankfully, we have gotten exactly what we asked for. 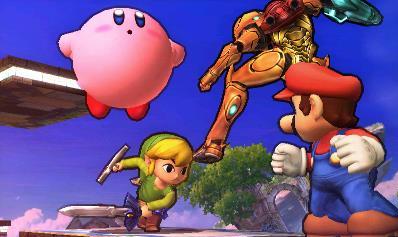 Super Smash Bros. has very fluid controls, and while, yes – the 3DS button scheme is limited, the game still seems to fit with the system’s interface just fine. Players can move their selected mascot with the slide pad, taunt with the d-pad, and perform smash attacks and special techniques utilizing the face buttons. The L and R shoulder buttons work well for throws and guards as well, and never once did it feel out of place while executing a nice timed block with a quick tap. As odd as it sounds, these controls feel familiar even though its new territory for the franchise. That being said, the slide pad does take some getting used to and isn’t nearly as flexible as the stick that a Gamecube or Nintendo 64 controller presented, but in just a little time and with some practice, veterans will be able to go in and clean house with no problem whatsoever. 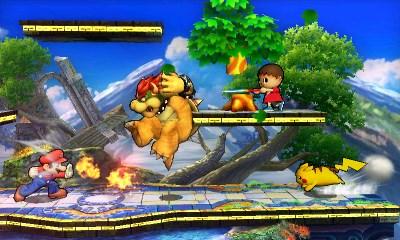 No matter what match type you may be playing, the object is and will always be to launch your opponents off the screen. To do this, players have a great deal of items at their disposal. Bob-ombs, explosive crates, and mystery capsules have made their return with a great deal of other returning stock, and items such as the blue shell, fire bar, and beehive are just a few of the new toys Nintendo have provided this time around. You can pick your choice of weapons during standard smash matches, or go in with the full monty – where chaos is the name of the game. I have to say that this batch in the 3DS version are actually a blast to use (literally and figuratively), even though pick-ups such as the Gust Bellows seem a bit cheap as they force players off of platforms with a gust of unblockable air. I would love to go over each item, one by one to describe how they work, but this review would be a book. I will say instead though that providing players with a new master ball that contains legendary Pokemon and seeing the alien bugs from Galaga on screen together is a spectacle, making each match you play unique and special. 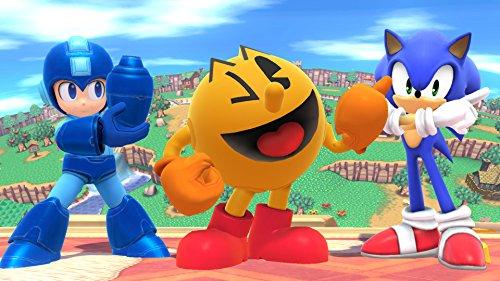 Characters are also far more balanced this time around. With the needed removal of tripping, Sakurai has built quite the moveset for each competitor. While the originals such as Pikachu, Mario, Luigi, and so on mostly feel the same aside from a few tweaks, Zero Suit Samus and Sheik have now been separated from their once combined counterpart, and feel completely distinct this time around. There are also fewer clones as well, as characters like Wolf have gotten the boot (wish it were Falco), and while I still would have loved to seen the return of Ice Climbers (and Dedede’s Waddle Dees and Doos, which also got cut), it honestly makes sense to see them go. There are plenty of newcomers to fill the shoes of the few removed, and everytime you see that “CHALLENGER APPROACHING” screen, your heart rate is sure to increase as the potential for a new unlock reveals itself. Going into this review, I was going to say how I was still partial to the Melee roster, but honestly, I can’t imagine life without Animal Crossing’s Villager, or even the fun and acrobatic Wii Fit trainer. When it comes to competitive play, you can either master the unique or the quick, and with nearly every character possessing a different feel, it can take a great deal of time, patience, and practice to discover the ins and outs of every famous face listed. 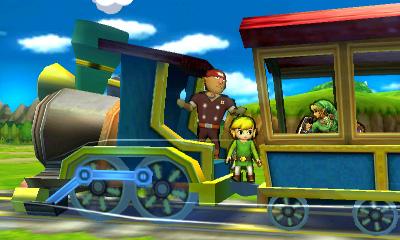 As far as modes go, classic Smash acts as the centerpiece, with up to four players going head to head. Local play for this mode isn’t too shabby either. Yeah, there were moments of input lag, but that is to be expected. Nine out of every ten of my matches near friends played smoothly for the most part though, no matter how insane the battles on screen seemed to get. Players who want to go solo can enjoy the classic mode and go through a long line-up of foes, where you are rewarded with trophies, parts (we’ll cover that in a moment), and cash for the little trophy shop that updates frequently. Those gold coins are even more important for re-playability, as playing a harder level requires more cash, so players will have to risk their own coins to earn their rewards of victory. All-Star mode is also a nice touch for either single or multiplayer, allowing players to go through the entire roster with no continues and a few handicaps. The Stadium also is a nice inclusion that I honestly didn’t expect to see in the handheld version, bringing with it the always enjoyable Home-Run Contest, Multi-Man Smash, and Target Blast- a new mini-game that works a bit like Home-Run Contest meets Angry Birds. Sure, you won’t spend a lot of time here, but these games are definitely wonderful ways to break from the main formula for a bit. 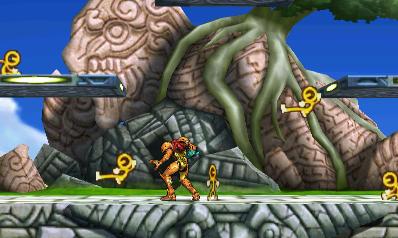 Smash Run is the equivalent of a story like mode without the story. Players pick a character and must compete against three others as enemies flock to classic locales. Here you will get to see a good amount of familiar enemies from a large variety of Nintendo titles, where the concept is to gain boosts from these said foes that will eventually become your stats for one grand battle, race, or other activity. I’ll admit, the climbing to the top as a finale was a little lame, but the attraction is fun to explore, albeit not nearly as charming as the standard, classic fare. As far as online goes, its a bit hit and miss. The collection of Smash, one on one, spectator, and non-competitive games are fine, but I noticed if one player has a lag problem, it can lead to a some unwanted frustration for everyone involved. I also had a bit of a time inviting some people into games, while other friends could match-up just fine. That said, this seems to happen with Mario Kart 7 and Animal Crossing a good bit as well, I just thought Nintendo might have patched the error by now.

Visuals
Super Smash Bros. is the best looking game on the 3DS. Sure, some may outdo it technically, but with stunning recreations of environments, highly detailed and equally as endearing character models, and all of the extra flare glazed on, its easy to make such a bold statement. Every animation is fluid and precise, no matter how intense the action is, and the 3D, while still a throwaway feature, makes the experience pop even more. Back in older versions, I noticed a lot of clipping when it came to items and interaction with other characters. This has also been addressed it seems as while it may occur now and then, it is a lot more rare to see that large pink dress of Peach’s cut through Donkey Kong’s thick fur. Nintendo even gave the option to add or take away outlines for characters. Since it is the default option, I never bothered too much with turning off this feature, as it makes this version stand out. It is a nice option to have however, and one of the many little perks that this game has to offer. 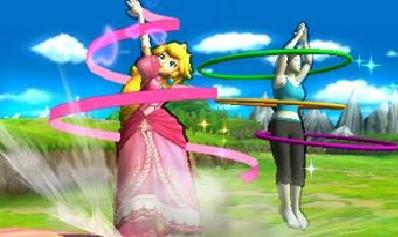 Audio
Sometimes, you have to give credit where credit is due. I can’t tell you how excited I was to hear Kapp’n’s lovely melody all over again, or for the Super Mario 3D Land beats to bare down upon my eardrums yet again. All of the music that has made these franchises, and mostly portable entries at that are assembled into one melodic package here, as just selecting a stage and hearing the menu tune is enough to make one light up with a bit of nostalgia. The characters for the game are almost all voiced as well, with Pikachu, Mario, Shulk, Ike, Robim, and so on all featuring their famous voices. Little easter eggs also run a muck in the sound department as well, but I won’t spoil that surprise. Just make sure you do some one on one battles.

Overall
Super Smash Bros. for Nintendo 3DS, or whatever you want to call the fourth entry in the franchise is simply magnificent. Never before has a handheld fighter offered so much by simply sticking to the roots of its ancestors than this title, while still bringing plenty of new features and faces to the table that is already loaded with content. There is something extremely special about the Super Smash Bros. franchise as a whole, and Sakurai has captured that element all over again. This game is a celebration of greatness, where you as the player are the guest of honor. Memories are made. Intense battles are had. Its not about winning in Smash Bros., its about having fun, and representing the characters that have already brought us so much entertainment over the years. Super Smash Bros. made quite the jump from consoles, landing into what should be the centerpiece for every 3DS owner’s collection.