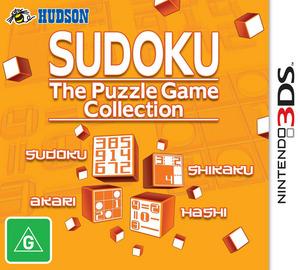 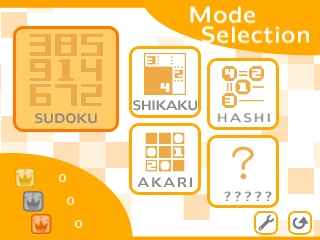 Picture if you will, a crowded public transport carriage. A ripe odour hangs in the air, the temperature is completely inappropriate to the weather outside and that strange man towards the back has been yelling for the past five minutes. To make matters worse, your only source of intellectual puzzle comes in the inconvenient form of a broadsheet newspaper. Well, not anymore. Hudson’s latest game for the Nintendo 3DS, Sudoku: The Puzzle Game Collection, features not only Sudoku but also three other puzzle games including Shikaku, Akari and Hashi, which is certainly enough to last you for the 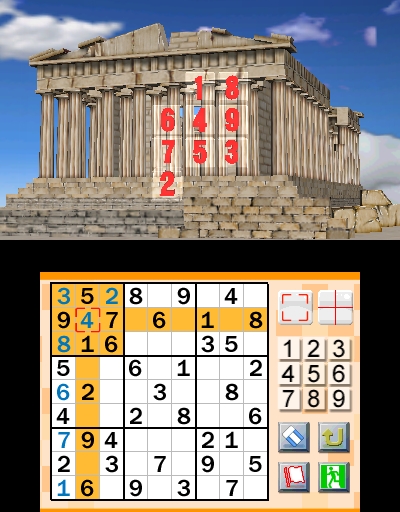 Having played Sudoku on other mobile gaming devices; on both smart and less ‘intelligent’ phones, I can safely say that Sudoku Puzzle Game Collection has them beat. If you are unaware, Sudoku is a number based game, where you must place the numbers 1 through to 9 into three by three blocks on a nine by nine game board without using the same number twice in one block. Using the stylus on the touch screen, it’s ineradicably easy to pick the appropriate place for a number and then select the desired number. For the Sudoku puzzles, it is a little more difficult and time consuming to utilise the game buttons. Overall, the stylus adds an element to the game that hints back to the paper and pencil format of the original game, in that the stylus affords to be held like a pencil or pen. The other games in the package include Shikaku, where you must divide the game board into squares and rectangles to match the numbers that are included. Again, another game that cries out to be played with the stylus, it is very simple to just touch and drag. Hashi is a bridge game. Numbers area on “islands” and you must draw lines and bridges between the islands according to the numbers displayed. The last game, Akari, involves setting lights around numbers on the game board in order to light up every square on the board. The numbers in squares dictate how many lights should be placed around it. While I still push the use of the stylus there is no reason why you can’t play these puzzles using button-based controls. Each game has their own control system, but the basic overview of it is that A will place numbers or lines and B can erase. 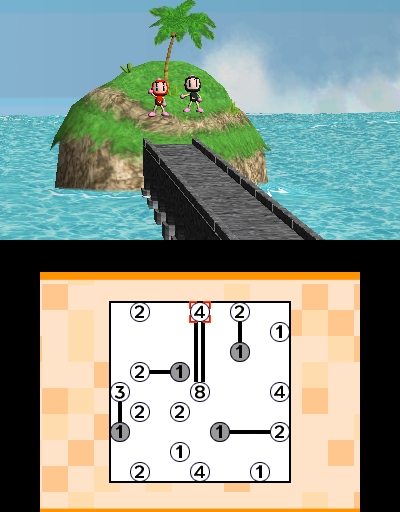 Being a game specifically for the Nintendo 3DS, you might be asking, why would Sudoku need to be in 3D? To be perfectly blunt, it doesn’t. I know that, you know that, and game developers Hudson know that. Because of this, Hudson have gone a bit further for their players can developed some three-dimensional graphical representations of your progress through the puzzles. Each puzzle has its own animation sequence that is designed as a graphic metaphor for your puzzle solving. Sudoku’s graphic representation is of wonders around the world, with numbers appearing on the screen once you have selected them appropriately or filled in a box. Shikaku has a ‘Tron’ like animation sequence, with cyberpunk motorcycles forming boxes with lights as they speed by. This one is pretty cool but does get a bit repetitive. Akari pushes the concept of lighting a screen into a museum. The graphics show a small boy playing trumpet walking through a museum as lights turn on to illuminate and uncover a thief trying to steal artworks. The last 3D graphics to mention involves a classic gaming character, Bomberman. Bomberman, or men, are stranded on islands and connecting numbers will form bridges to connect them all together. The best part here is that if you remove a bridge, it gets bombed. The problem here is that the animations don’t change as you progress through the levels. But really, they don’t need to, you don’t often look up from the puzzle board on the lower screen, it’s just nice to know that Hudson have pushed the boundaries of the puzzle games to try and give players a unique experience that only the Nintendo 3DS can offer. 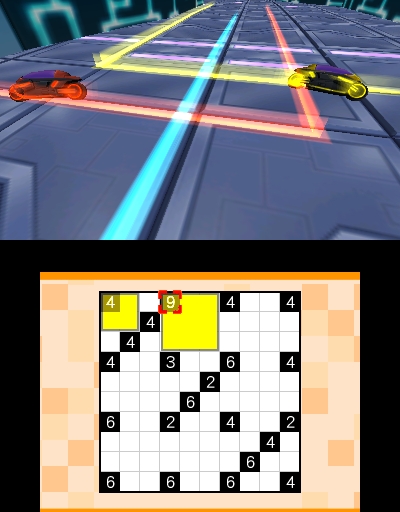 As well as these graphical representations of puzzles, there is also the option to display the full game board, which will automatically turn the 3D slider off. Or if the game board in 3D is more your thing, “3D Visuals 1” (which can be selected in settings) will allow you to do so. This option also makes use of the 3DS’ tilt sensitive technology. If you tilt your device, the top screen will change to a countdown timer to show how close you are to getting one of three colour crowns, gold being the best and earning you a hint to use when you get stuck. The use of the 3D technology, and in fact the 3DS’ technology as a whole is rather limited. I don’t feel that it is completely necessary to try to use it with a title such as this, however given that it was released for 3DS and 3DS alone, there could be a little more of a push to develop a more unique puzzle experience. Not that the game doesn’t push the boundaries of a portable puzzle game, but a little bit more of a shove would be nice. 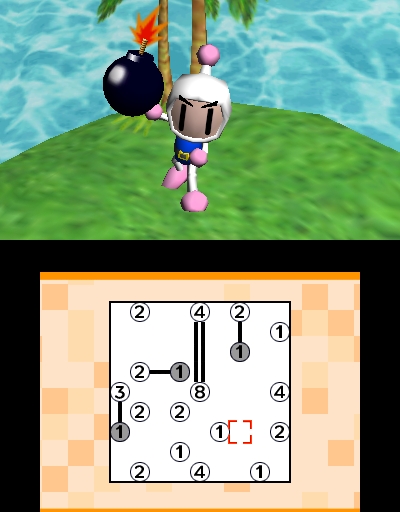 Because each puzzle can have it’s own graphics, each puzzle then gets a fitting audio track. There is also the ability to change the music track for each game in the settings, with the option of six different tracks per puzzle. This is a nice little design feature seeing as music can often become really annoying when attempting to concentrate. In some games, the sound effects can become a little annoying, especially considering you may be moving through a puzzle quickly, undoing and redoing moves rather fast. Particular proof of this is in Akari when the lights switch on and off depending on your move with an awful industrial clang. However this only happens when viewing the animated 3D graphics. For the most part, the audio is fine and suited to the puzzle genre. 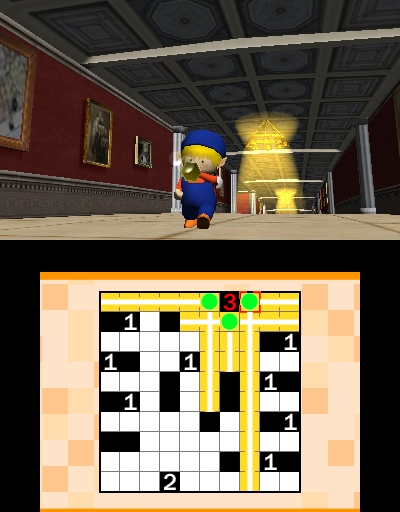 The game obviously has a very limited audience. If you like Sudoku, then obviously this is a title for you. Fortunately for me, I am a casual Sudoku fan, taking time out of plane trips to fill in a few boxes before I realise it is too hard. Because of this, I had some fun playing this title. However, I can’t help but feel that the functionality of the 3DS was a little wasted on this title. Apart from the little nod to the graphical capability of the device and the ability to tilt the device to switch between views on the top screen, which as I mentioned, has its limits, Sudoku: The Puzzle Game Collection doesn’t feel like a title that is best suited to the 3DS. I admire the attempt to push the boundaries of a puzzle game, but still can’t but wonder if it is really necessary. That being said, if you like your pencil puzzles, this title will be right up your alley, the mechanics are easily the best of any Sudoku game I have played. Unfortunately, if you aren’t the biggest fan of such puzzles, you should probably steer clear of this one.