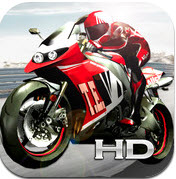 You will have to create your own story as you progress from the lowest Newcomers League to the All-Stars League as there is no story in the game. I’ve imagined my biker to be an orphan who found street bike left by his late father and now races towards glory in his father’s memory. 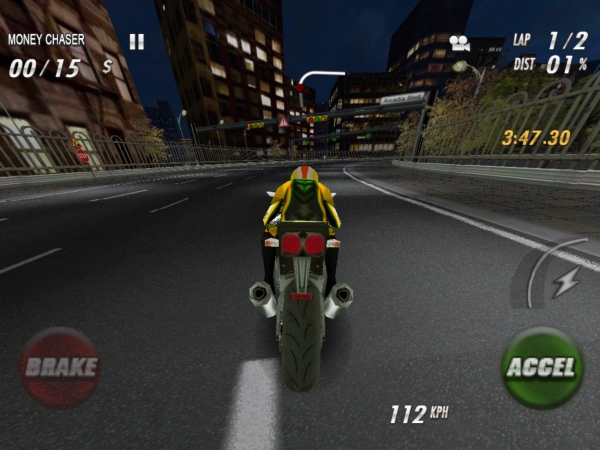 Streetbike: Full Blast HD consists of several different types of motorcycle races grouped in leagues by difficulty. Each race will give you money that you can save to purchase better motorcycles that will make it easier to pass future races. While on the track, there are money pickups to increase the amount of money awarded and boost pickups that will provide you with a full boost meter to zip around the track with. There is a quick race mode to get into the game fast and. Controls are accelerate, brake, and boost buttons on screen in conjunction with either tilting your iPad to steer or a left and a right button. Every player will be using the tilt controls because the touch screen controls for steering are absolutely unusable tapping the turn button will cause your rider to turn 180 degrees on screen and will turn sharply. Holding the turn button for more than a second will cause your rider to do donuts on the track. On the other hand the tilt controls are sharp and responsive. I found it easy to control the bike and was mastering high speed turns on corners in no time at all. I only wish I was able to lay down in bed and use the tilt controls as they only work while sitting or standing upright. 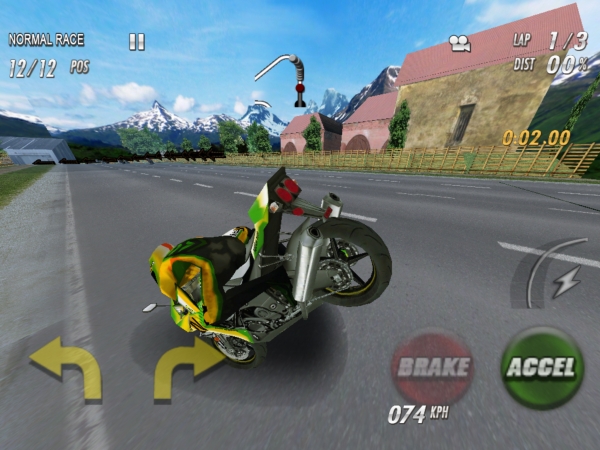 The racing modes are rather generic such as one on one boss battles, multi bike races, and time trials. The actual racing on the other hand can be pretty fun and intense. The game handles bike physics like an arcade game. Crashes are pretty rare, I found it was next to impossible to wreck the beginning bikes by crashing into walls, cars, trucks, and other riders. As I started with faster and faster bikes, the danger of crashing into other vehicles grew. The tracks range from a casual Sunday ride to hair raising difficulty with multiple hairpin turns. There are 16 tracks spanning eight different themes in the game, providing a decent variety. I do wish there was the inclusion of online multiplayer as racing against real humans is always more challenging and fun than racing against the computer. Over all there is nothing incredibly impressive about Streetbike: Full Blast HD’s game play but besides the touch screen control scheme there is nothing horrific about it either. 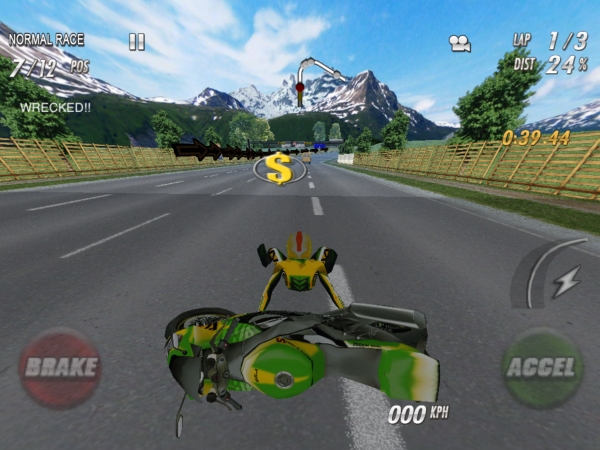 Considering Streetbike: Full Blast HD is supposed to be the high definition version of Streetbike: Full Blast, the graphics are extremely lacking. On the new iPad, the graphics look extremely dated. The landscape looks like it was torn out of a Playstation era game. Also, as the motorcycle moves forward, the movement of the landscape looks extremely unnatural. The random cars or trucks you find on the road are nothing to rave about either. The models look like several rectangles glued together with the skin of a car or truck placed on top. Thankfully the motorcycle models are an improvement, compared to the rest of the game, they are rather well modeled and skinned. However the biker riding them seems to be an afterthought and worst of all, the crashing animations are horrific. There are no iPad Retina graphics in this game. All in all, there is nothing high definition about Streetbike: Full Blast HD. 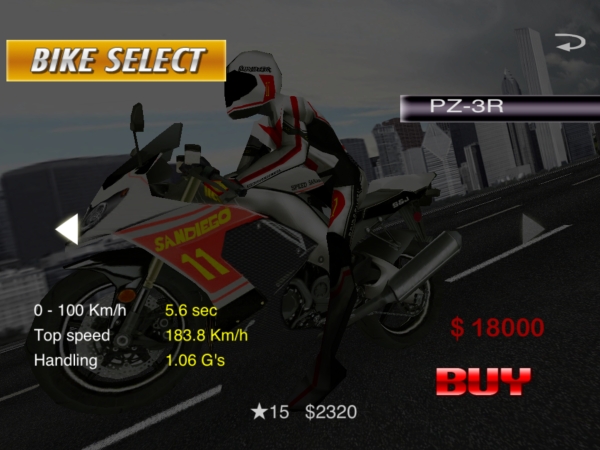 The audio is a mixed bag. The sound effects are pretty good in Streetbike: Full Blast HD but on the other hand, the music is extremely generic. There is a pleasant roar of the bike engines and squealing of the bike tires as your bike rushes forward, though the sounds of impact and crashing leaves room for improvement.  The music unfortunately is extremely generic rock music. There is nothing particularly offensive about it, but it’s not something you’ll remember either. It will get you into the racing mood, but it won’t make you think you’re racing for your life or anything that dramatic. You won’t be missing anything if you turn off the music and play your own.

Streetbike: Full Blast HD is a mixed bag. Visually the game looks dated, the animations are poor and most of the models are subpar. The sound effects and the actual racing game play is nothing ground breaking but is very solid. The tilt controls are well executed but the touch screen controls are a laughable mess. The game could use some patching and a visual update to improve the graphics and support Retina screens. If you’re willing to look past the lousy graphics you’ll find Streetbike: Full Blast HD to be a solid if not slightly generic racing game.