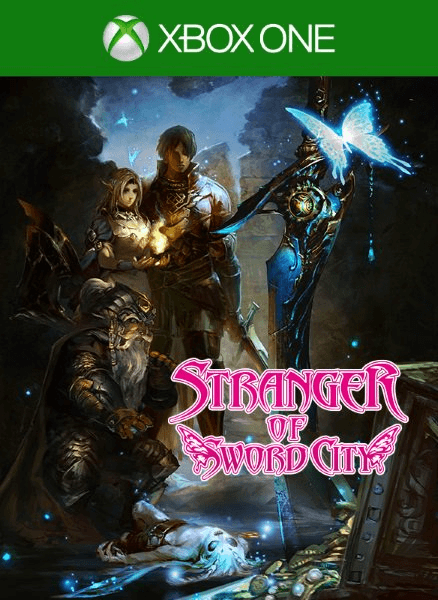 Overview
There was once a time when first person dungeon crawlers had practically vanished in the West. Now in recent years this particular style has made a triumphant return on handheld devices as the 3DS and Vita both have a growing library of these titles. That being said, there is still something of a complete lack of these types of games on home console. As such when Experience, the team behind titles such as Operation Abyss and Demon Gaze, announced that they were bringing Stranger of Sword City to the Xbox One it was something of a surprise. So now that this title has arrived on a console, is it worth delving into?

Story
The player is aboard a flight from Japan to Alaska and seemingly out of nowhere the plane explodes and crash lands in a mysterious land. There are no apparent survivors outside of the main character at first but they soon come across a mysterious escort that helps them escape the area they woke up in. Of course after a minor betrayal, a rescue by a knight, and a fight against a boss the story begins as the character arrives in the main city. 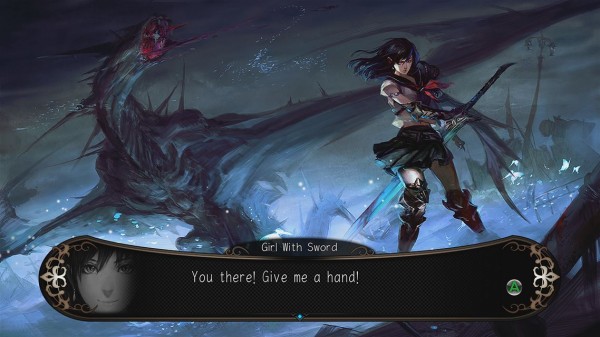 It is here that they are informed that they are not the only ones that have ended up falling through a dimensional gap that has left the stranded in this land. Those who have however find that they are incredibly powerful now thanks to the land’s reduced gravity allowing them to wield incredible equipment with ease. Those capable of these feats are called Strangers and in order to help pay for their room and board, they must venture out into the dungeons to defeat creatures ranging from simple opponents to powerful special foes called Lineage in an attempt to gather their Blood Crystals, for if a crystal is left behind, the foe will just regenerate and continue its rampage. 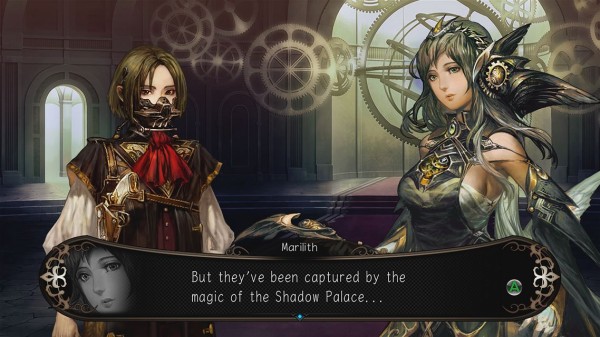 Those familiar with Experience and dungeon crawling RPGs such as this will know that there really isn’t a whole lot driving the storyline here which is unfortunate as it is something of a step back from other title’s they have worked on in the past. Stranger of Sword City may have a number of interesting sounding themes but most of the storyline is told through standard still animations and many of the characters that you meet in your journey aren’t explored in any meaningful way. While the story does serve as a solid enough set-up for what players will be spending their time doing, it would have been great to see more done with the lore of the world.

Gameplay
One of the first things players will do when starting the game is create their character in a very D&D style manner. This includes selecting a starting race, ranging from humans to dwarves, elves, and more, and then classes that these characters are then based off of. Players will then be able to even select the age of their character which will affect how many bonus points they can roll for to boost their stats and how long it will take them to recover if they are downed. 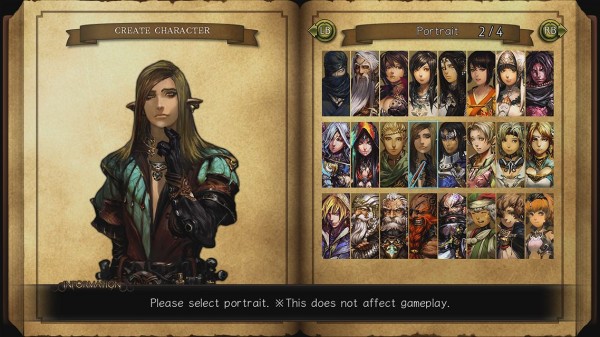 The biggest aspect in Stranger of Sword City is exploration and battle. I say this because outside of the time spent in the hub city used to rest up, change party members or recruit new ones, purchase equipment, sell loot, etc. the majority of your time will be in the first person dungeons traveling through maze like labyrinths filled with monsters, traps, and plenty of secrets to discover. Thankfully, as with past games from Experience, the auto-map feature clearly marks out locations that players have visited in the past as well as the shortcuts they have unlocked which is quite useful since many of these dungeons are incredibly long.

As such it’ll be quite common for players to have to eventually retreat back to town in order to fully recover and potentially purchase better equipment for the road ahead or swap out a party member with one that may be better suited for a specific task such as a thief to reveal a secret or a mage to deal damage to opponents that can only be harmed by magic or enchanted items. To go along with this helpful map is the ability to select a previously visited part of the map and set the character to “auto-move.” While your party will travel on their own to the selected destination the random enemy encounters will still occur but thanks to the way battles are entered, players won’t be caught off guard if they aren’t paying attention at the time. 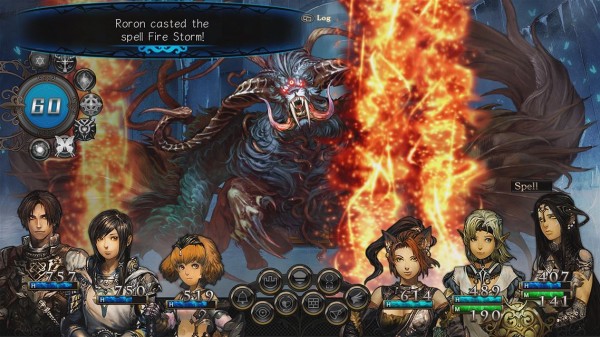 When fighting against opponents the combat is handled in a turn based manner and is still presented through the same first person view found while traveling. Players will select whichever actions they want to take and then go back and forth against the foe. Things have been streamlined a little bit as players now have the option, which I highly recommend you only use on sure-win opponents while grinding or traveling through a previously conquered area, to automatically use the previous turns’ commands once more in an effort to hurry the combat along.

The reason I gave that warning about the quick battle option is because Stranger of Sword City is an unforgiving game, far more so than many other first person dungeon crawlers. This is driven into players early into the game as their first task to hunt down a Lineage creature can easily put them in the ground if they don’t plan properly and make retreats back to town to recover from time to time. Rushing things often leads to an early death which is something that is quite harsh in Stranger of Sword City as all party members, except for your character, can be killed off permanently. 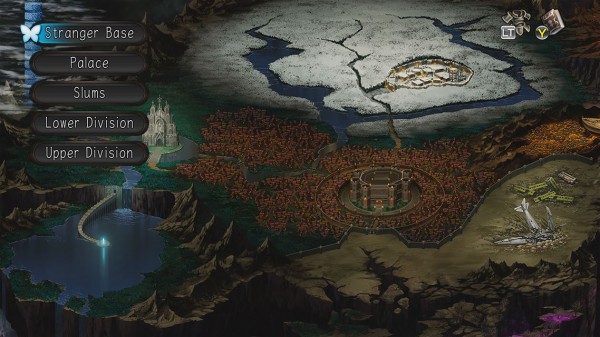 When downed in combat, a party member can be brought back to life by bringing them back home but this is at the cost of a life point, of which most characters only have two. There is the option of allowing that fighter to then rest for an even longer time to recover a life point but this will put them out of commission for quite some time and if that party member happened to be one of your best, then you’ll need to head back to the grindstone in the meantime.

As such it is useful to keep track of the various weaknesses of the enemies you come across and the various techniques that they use. There are often times that Stranger of Sword City can feel a bit unfair as some foes will constantly attempt to call for back-up and bring in more enemies to fight, so players need to be prepared for anything, even if it turns out to be something incredibly cheap. That being said, there is something quite satisfying about pulling off a dangerous victory or easily trouncing opponents that gave you trouble when you head back in with a better kitted party. 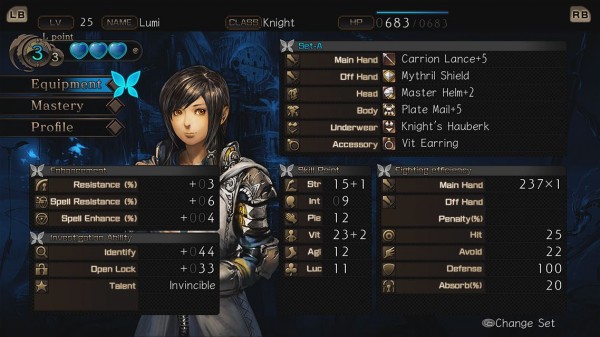 You see, party and equipment management plays a big role in staying alive in Stranger of Sword City and this game allows players to try it every way possible. Each party member can be created from scratch, allowing for the selecting of their race, bonuses, weaknesses, class, and more. There are even certain locations in the dungeons that provide certain levels of risk and reward by allowing players to wait in ambush for their foes. This mechanic allows players to “watch” monsters travel by and either peak at who the foe is or what they are carrying with them. If they feel like taking a risk, they can attack them with an advantage but if you choose to pass and wait, you also put yourselves at the risk of being caught and attacked while unprepared.

Visuals & Audio
One of the main points that has been advertised for the release of Stranger of Sword City is that there is an updated visual style to be chosen this time around. At any given time players can opt to switch between the two styles, with Type A being the updated anime styled designs and Type B featuring a Western fantasy style approach, but regardless of which style you choose both of these art styles are gorgeously drawn and presented here.

It Is worth noting of course that since this is a first person dungeon crawler, that as far as special effects go there isn’t much to be found here outside of some of the more stunning looking attacks. That being said, the character portraits and monster designs are incredible to see and with almost every dungeon offering some new theme, players will never feel like they are simply trudging through the same scenery over and over again, unless of course they had to retreat and are heading back in. 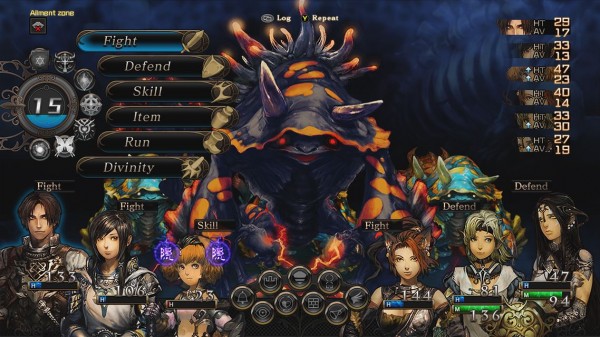 It is worth noting that there is no English voice work for Stranger of Sword City however the provided Japanese voice track does a great job handling the few characters that make up the main storyline. Thankfully while there isn’t much in the way of voice work, the title offers an incredible soundtrack consisting of tense atmospheric tracks that are perfect for battles and exploration as well as gorgeous pieces of music for simpler scenes.

Overall
Stranger of Sword City is the type of dungeon crawler that you must advance through at a slow and methodical pace by playing it safe when needed and taking risks when possible. With a formula that has fit the genre well enough throughout the years tweaked a bit to feel a bit fresher and plenty of content to explore, Stranger of Sword City may have its weaknesses but offers players a challenging, but rarely cheap feeling, RPG. Considering this is something we don’t see very often these days, those looking for a satisfying console experience will find themselves pleased with what Stranger of Sword City has to offer.
Capsule Computers review guidelines can be found here.