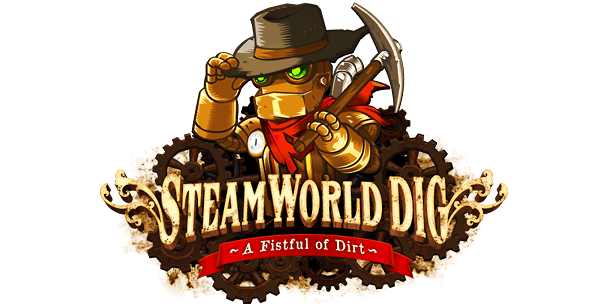 SteamWorld Dig is Image & Form’s latest entry into the SteamWorld saga (which began with the DSiWare game; SteamWorld Tower Defense). In this steampunk western, a little robot has inherited his dead uncle’s mine, and has gone to start it up again. The game is a unique mix of sandbox exploration, platforming and a Metroidvania style of going back and revisiting past areas with new equipment and abilities to keep progressing. The game’s fun and unique style of play makes it easily one of the best games on the 3DS to date, but if it is let down by anything, it is its relatively short length. 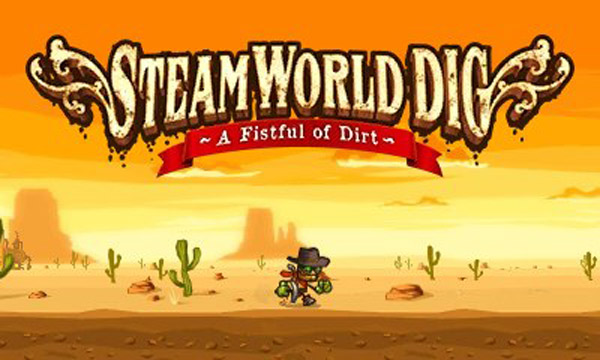 A little robot by the name of Rusty heads to the almost deserted township of Tumbleton. He is the inheritor of his uncle’s old mine, and has come to start it back up again. After he enters the mine (by accident) he encounters Dorothy and the two escape the mine. Rusty’s uncle Joe had a few secrets down in that mine, and Rusty becomes adamant in finding out why. Delving deeper into the mine shows him things he could only have dreamed of, and through his mining and jewel excavation, he is able to help the town of Tumbleton thrive once again.

The story is fun and ties up the gameplay nicely, but is also not necessary to enjoy the experience. This is a game focused on its gameplay, and as such there are no long cut scenes or unskippable dialogue sections to keep you bogged down. The only time you will speak to the NPCs after the small tutorial section is when you are trading with them or upgrading your equipment. Even when some of their speeches seem a bit long-winded, pressing the A button speeds things up exponentially, allowing you to get back into the game ASAP. This is great, especially after you have beaten the game (or you accidentally erase your save file right before the end *cough cough*) 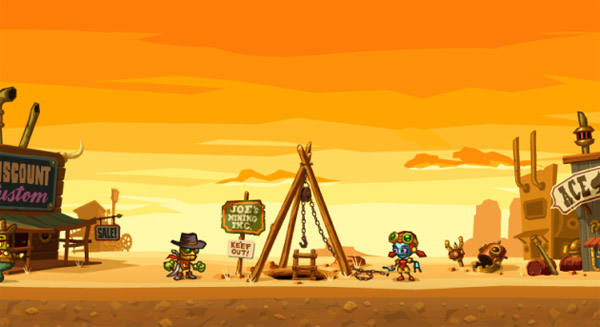 Most games can be easily described with one or two genre titles; “platformer,” or “Action-adventure,” something like that. SteamWorld Dig however is a little more difficult to describe with generic names of phrases. Labeling it feels more like writing a recipe for a great game. It is a sandbox-esq, Dig Dug and Minecraft-inspired, Metroidvania platformer with a Mega Man twist. When I used that string of words to explain SteamwWorld Dig to a non-gamer friend, I was met with a look of “are you just making stuff up now?” Even gamers I spoke to were hard pressed to imagine how all those different elements could mesh together with the steampunk western theme to make for a coherent game, let alone one that is enjoyable.

In SteamWorld Dig, your job is to mine your way through various mine shafts, reaching puzzle rooms, collecting gems and upgrading your little robot. As you find more gems and sell them for sweet, sweet cash, you can buy upgrades that allow you to dig through the earth faster, stay underground longer and hit enemies harder. The game is very vertical in nature, which forces you to dig deeper and deeper to find the next area or the more expensive jewels. Aside from a few small pockets, the entire mine is filled with dirt, stone and debris, which means you get to make your own path through the shaft however you see fit. 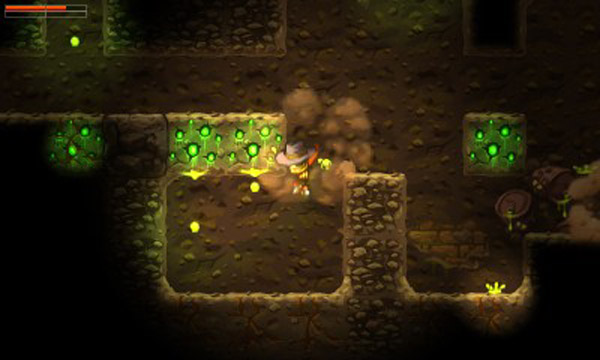 As you progress through the game’s mines, you will find yourself entering several offshoots that lead to what I like to call “Puzzle Rooms.” In the puzzle rooms, you are tasked with using your skills and abilities (often those unrelated to the digging of blocks) in order to overcome a series of challenges. The reward that follows is usually an upgrade or a new skill that allows you to progress further through the mine, as well as going back and granting access to areas you might not have been to prior.

You have three different energy meters in SteamWorld Dig, and it is imperative you keep an eye on all three at any given time. The health bar is the most obvious, and as in practically every other game ever created, getting hit removes points from the health bar. Taking too much damage, or falling from an obscene height causes your little robot to crumble and fall apart, costing you half your current money and loot in the process. Loot can be regained, but you have to make your way back to the point you were when you fell to do so. 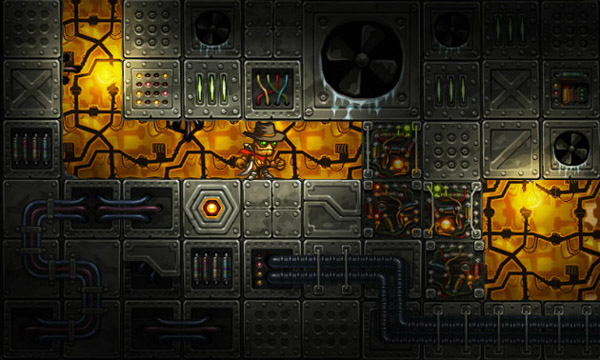 The next gauge is the water-gauge. After your second upgrade, you will have to keep track of how much water you are using. Certain abilities like the Steam-Jump (super jump) or the drill will deplete your water meter, and once it is empty you lose access to those abilities. It is in essence a clever use for the old standard magic meter. Small pools of water can be found through the cave to replenish your water, and every time you return to the surface they will refill.

The last meter is the Light Meter. as you are underground with no natural light, you rely on torches and your internal fire to light your path. As the amount of light you have left continues to dwindle, you will find yourself being unable to see as far as you could. Eventually the light runs dry and you are forced to struggle your way back to the surface without any real sense of direction aside from your mini map.

The game is relatively short, able to be played through in a little under four hours, but it offers a wealth of replayability. The areas you travel through are set in advance (including the rocks and stones you are unable to dig through) but the placement of jewels and gems is random and will change with each playthrough. This allows for you to play through three, four or even five times and make new pathways down the mines each and every time. 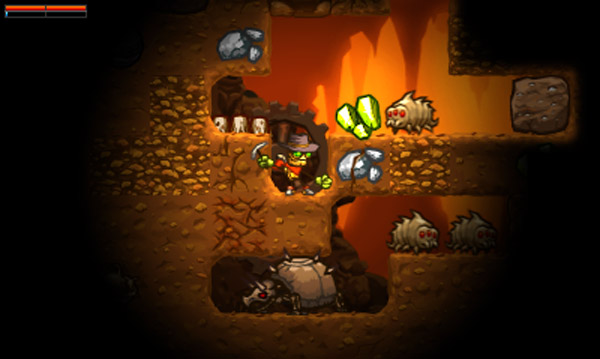 The mixture of steampunk and western elements is definitely an interesting one, but the two vastly different genres manage to come together really well. The result of their union is a world that looks and feels fantastic. Not only that, but nothing seems out of place, and it isn’t too far fetched to believe that these steam powered robots belong in this tiny western town.

The hub of the game is the town of Tumbleton. Here you will find all of the game’s NPCs who will help you through your journey. Each character serves their own purpose, and no one is there for the sake of it. Unfortunately this results in a town of only about 5 people (robots?), but they alone manage to flesh out this dying little one-horse town. All of the characters look like stereotypes from an old Clint Eastwood flick, including the clothing, hair styles and even facial hair … but they all feature a robotic twist (cause you know, they are robots). 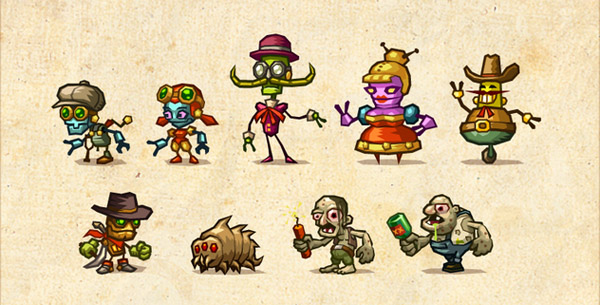 The mines themselves are remarkably detailed for areas of brown and grey. A lot of the rocks look distinct so that you can tell at a glance how long it will take for you to break through to some areas, and what tools you will need. If you are someone who prides themselves on being efficient, then you will love this, as you can plan your routes ages ahead and then just begin your descent. While many of the rocks and cubes of dirt jump out at you as being destroyed in one hit, or “need the drill for that one.” A lot of them do look all the same, with no real way of identifying how many pickaxe swings it will take until you start going at it. It isn’t uncommon to be going through an area where identical looking patches of dirt take a different number of hits to destroy. 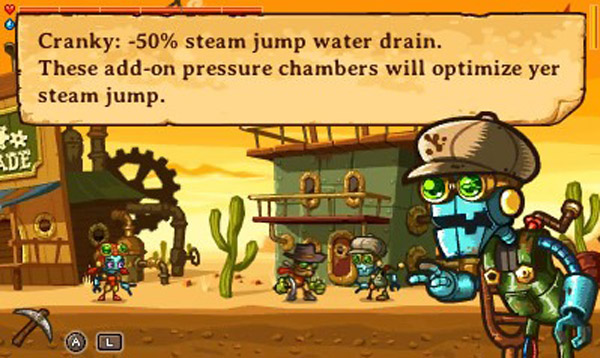 You know when you hear a piece of music and you are immediately swept up in the feeling of the Wild West? Thoughts of Cowboys, Lawmen and Six-Shooters fill your mind as a guitar is slowly strummed? Well that is the exact feel you get from SteamWorld Dig’s score. The music really helps with the immersion in the game. Although it isn’t a massive stroy driven Hollywood-style epic, it still manages to catch your attention and your imagination.

The sound effects are quite a nice experience too. For a game that requires you constantly making the same actions, the sound effects surprisingly don’t get tiresome or grind your ears. This helps, because in a game where you spend most of your time digging blocks, having repetitive sounds would be a real enjoyment killer. 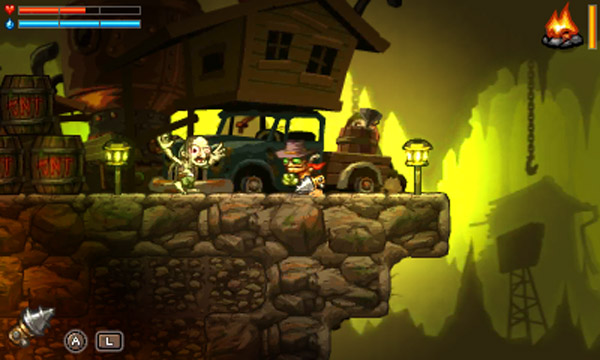 Two games into the SteamWorld universe and I am already hooked. SteamWorld Dig is a fantastic game that takes a lot from some of the best genres in gaming and melds them together to create an experience unique to itself. It also harkens back to a time where things weren’t just explained to you so freely, and you had to explore for yourself and learn the rules and limitations of the game on your own. Unique gameplay and a great setting work in unison to create what is easily one of the best experiences on the 3DS … If only it was a bit longer!