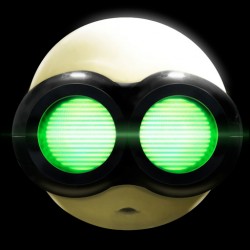 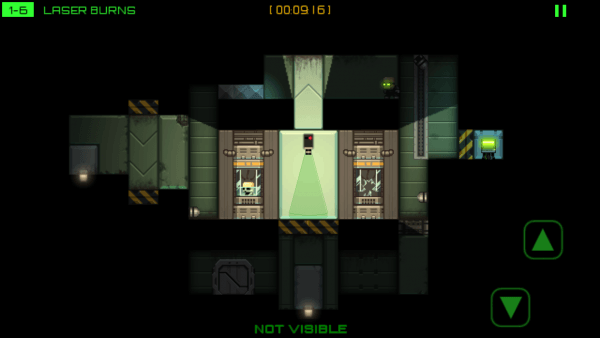 Stealth Inc. is a little light on story. Players plan an unnamed clone attempting to escape a series of increasingly difficult puzzles. Throughout the level, snarky commentary appears in the levels, drawn in the shadows from a heartless commentator that would make GlaDOS of Portal 2 proud.

Stealth Inc. will task players to navigate through a level as quickly as possible with the least amount of deaths and times detected. Expect to die a lot as the path is littered with dangers like turrets and lasers that will kill off the clone in a gory explosion. The game comes with 80 levels split in into smaller chapters. Each chapter is capped off with particularly challenging boss level.

The level design in Stealth Inc. is very good. The puzzles are challenging and the stealth elements are implemented splendidly. The game will challenge the player’s agility and puzzle solving skill. I did find the difficulty level of the puzzles did not ramp up at a steady rate. It suddenly shoots up rather quickly early in the game. However, the game does allow for unlimited time and deaths, so at least there is no major penalty for repeated failure. 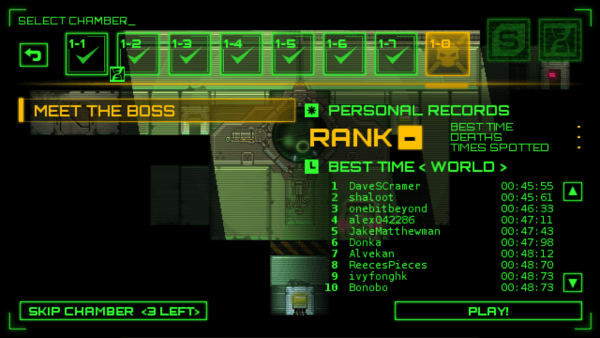 The controls have a lot of customization options to cater to hands of all sizes and different iOS devices. By default, the clone can be moved left and right by pressing down on the left side of the screen and moving the thumb to the intended direction. For those who prefer on screen buttons, the movement controls can be replaced with two on screen buttons. The height of the jump/duck keys can be adjusted between three settings which have the buttons nearly touching the bottom of the screen at its lowest setting and sitting near the middle of the screen at its highest. The controls very responsive and work well with the game.

The game has good replay value. The game constantly updates the global leaderboards for top scores and players are always challenged to get through levels faster. There are tons of community made levels available for download, however they are a separate $1.99 in app purchase. Considering the game is already $4.99, Stealth Inc. with the extra purchase is still a few dollars cheaper than the PC version. 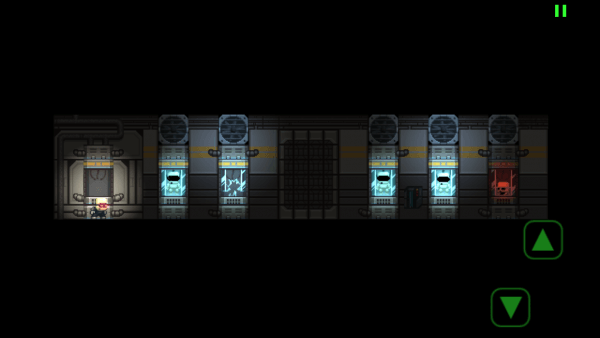 The visual design in Stealth Inc. is splendid. The game takes elements from famous stealth games like Splinter Cell and mixes it with a touch of cartoon style. Although playable, Stealth Inc. is not the friendliest game for iPhones and iPod Touches. The game is tiny on the small screen. It becomes difficult to pick out some gameplay elements because of the size. The game is much better on the iPad simply because of the larger screen size.

Stealth Inc. has a great industrial electronic soundtrack that is a pleasure to listen to. The sound effects are top notch. This is a game that can definitely be enjoyed with headphones or even the crappy speaker on iOS devices. 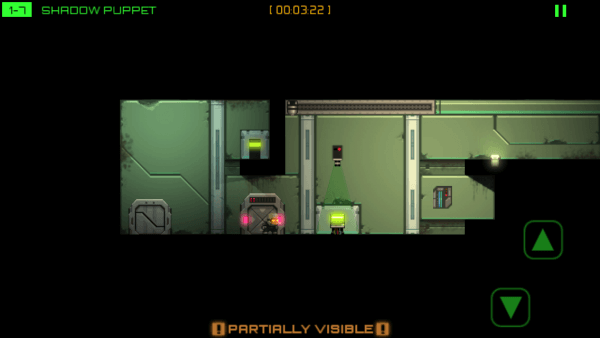 Stealth Inc. is a great title for platforming and stealth fans. The gameplay is challenging and insanely fun. However, the game is insanely tiny on the iPhone, which makes it hard to play at times. Additionally, the extra community made levels are a separate $1.99 purchase, which can be hard to swallow considering the game is already $4.99, a high price for an iOS title. Overall, an excellent title for iOS gamers looking for a challenge.