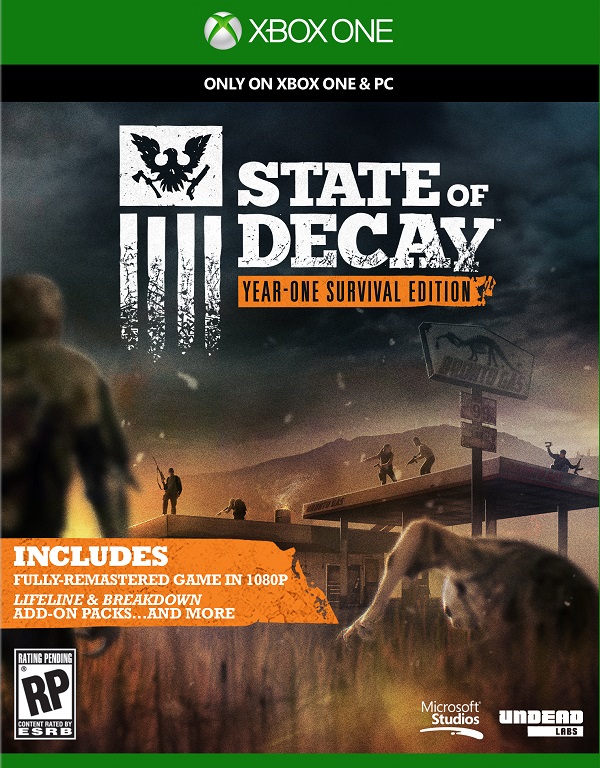 Overview
A little over a year and a half ago, Undead Labs released State of Decay on the Xbox 360 and it turned out to be a pretty big hit as it dropped players in a zombie infested valley with limited resources, permanent death, and the responsibility of taking care of a group of survivors. Now Undead Labs has returned again and this time they have brought State of Decay: Year One Survival Edition to the Xbox One. Featuring the original game plus the Breakdown and Lifeline DLCs with various other upgrades, is it worth entering Trumbull Valley once more?

Story
The story throughout State of Decay: Year One Survival Edition remains very much the same as it was before as players are put initially dropped into the shoes of Marcus and Ed. These two have just returned from a long fishing trip only to run into a group of zombies shortly after making landfall. After managing to survive their first encounter, they encounter a group of survivors at a Ranger’s Station. 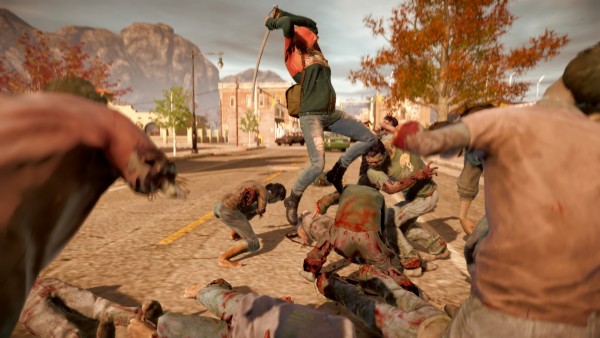 With only a short rest here, Marcus and Ed scout the area for supplies only to return to find everyone at the station dead and with their only hope being a voice on the radio guiding them further into town to a church where a new group of survivors are located and it is here that the handholding of State of Decay’s storyline comes to an end.

You see, while players are guided to the church and their group of survivors, there really isn’t much of a core storyline to follow here as the player is instead tasked with surviving more than anything else. Couple this with the perma-death mechanic and you will find that even your favorite characters can quickly fall to a horde of zombies or freak type. This means that players will have to pay close attention to their community of survivors as it is entirely possible that a new face may be the next hero.

There are a number off side-stories that do appear over the course of the player’s survival, usually solved by simply driving to a surviving group’s location and performing simple tasks for them or even just talking to them. These side-stories don’t have much focus unfortunately and many simply just end with no real payoff. That being said there is an end goal for State of Decay’s story, even though it isn’t exactly a very solid ending as it leaves the title open for a sequel, it does answer a few questions raised during the game but of course never explains the origins of the zombies. 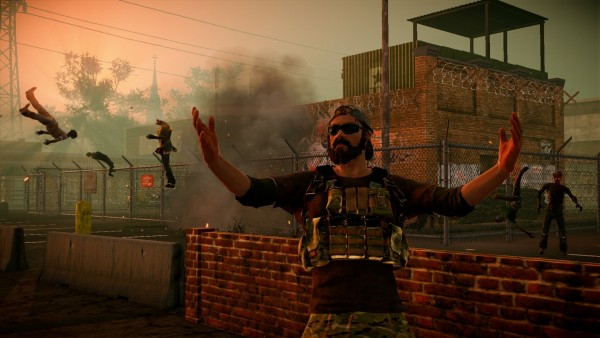 State of Decay: Year One Survival Edition includes the Lifeline DLC that actually does contain a bit of extra story as it follows a group of US Soldiers that make up the surviving Greyhound One as they are tasked with rescuing various VIPs as well as standard civilians in a completely different map than the core storyline and gives players not only a fresh area to explore but a bit of a different storyline to explore, especially since this time around there are multiple endings to help change things up.

Gameplay
The core of State of Decay remains very much the same throughout all of the DLC and very little has been changed in this re-release. Players will be have control of one character at a time, though you can bring an ally along by using influence which is gained by completing side-missions, returning with resources, rescuing survivors, and gathering various supplies such as guns, melee weapons, consumables and more. You see, it is all about community and keeping the base well stocked while also trying to keep everyone happy and secure about their survival, which means players will occasionally need to help cool someone off by taking them out for a quick zombie hunt. 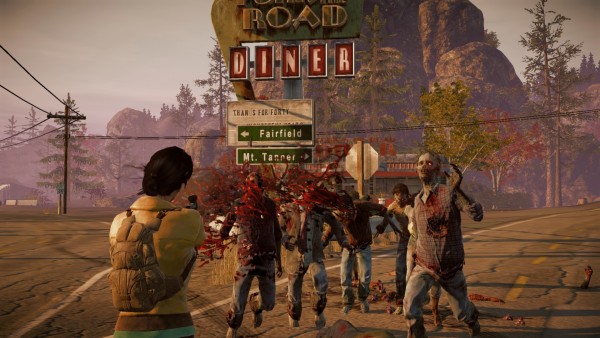 What makes this a challenge is that while you are free to scavenge essential resources such as medical supplies, ammo, materials, food, gasoline for the home base alongside weaponry, food/pills for health and guns for yourself, once you have searched an area and cleaned it out, there will never be anything in that house again. This means that if you clear out all of the areas close to your home base, you will have to venture further and further away each time to acquire more necessary resources.

The same thing can be said about vehicles. Not only does the game track every vehicle you come across and let you know how many are actually left, they never respawn. This means that if you happen to completely destroy or empty an area of every vehicle this means that you will need to be running quite a long ways at times. This of course is never a good idea, especially since players can now store large amounts of equipment, including rucksacks full of the necessary resources for keeping your group alive, and also because if you happen to run into danger on the way back home and die, that character will be gone forever, meaning you may end up being left with only a group of weak ragtag playable characters if things go south quickly. 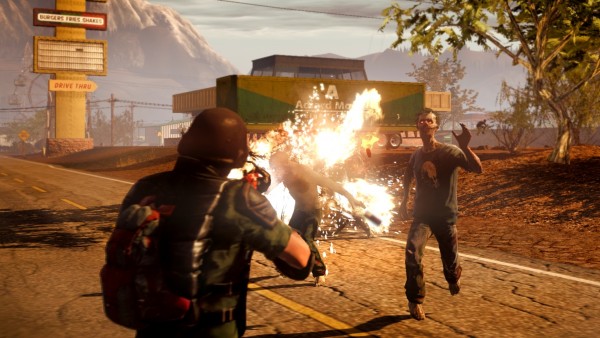 The way that the survivors are handled in this game is unique as well. They will grow tired from scavenging for supplies to long, fall sick due to lack of medicine or improper home facilities, become injured from missions and more. The reason for this is that you are simply a part of a community and the world itself is still revolving around you. This means that other survivors can become trapped or may require your assistance in dispatching zombies and if you ignore their cries for assistance, they can survive and be angry with you, be hurt in some way and be temporarily put out of commission or worst of all, die.

There are quite a few zombies in the title, to the point that it is occasionally best to run away or sneak around. There are your basic zombies that can be dispatched easily on their own but they can quickly become dangerous in close quarters, especially when they begin to swarm you. You see, the zombies in State of Decay can hear quite well, to the point where searching a place too quickly can draw every Zed in the area to your vulnerable survivor.  This doesn’t even touch upon the fact that there are numerous special zombies that can make things difficult, including vicious Feral that are incredibly fast and strong, Bloaters that explode and drain the player’s health and stamina, Screamers that stun survivors and draw more zombies to an area, and even Juggernauts that are capable of heavily damaging vehicles and absorbing large amounts of punishment. 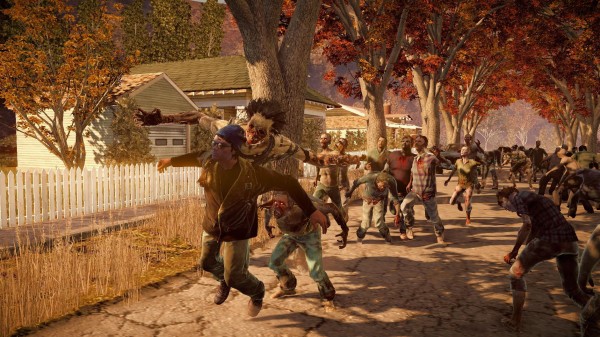 Players will need to make sure that they have plenty of weapons at their disposal to put away the undead horde including a number of special skills that players learn once their survivor becomes a veteran zombie slayer. Thankfully, a large batch of new weapons, including powerful incendiary shotgun shells, have been introduced in this new release giving players more variety than ever before to dispatch the zombie hordes they come across. That being said, every weapon in the game features a durability level and can be lost forever, but through proper inventory management players will be able to carry not only a melee weapon, but a firearm with plenty of ammo, snacks to restore stamina, and healing items to stay alive. Of course, properly training and making sure to upgrade certain stats, and aiming for fallen zombies with finishing moves is the best way to keep your favorite character around for a while.

There does come a point however that being simply too well prepared can be a bit of a problem however, as it eventually turns State of Decay‘s tense survival moments into rather mundane affairs. If players manage to properly plan their community’s layout, build necessary facilities, keep a safe stock of vehicles, manage a well-trained and well equipped character, and secure enough resources it is entirely possible to find yourself feeling a little bored at times, especially since certain storyline advancing quests only appear after a certain amount of time has passed. 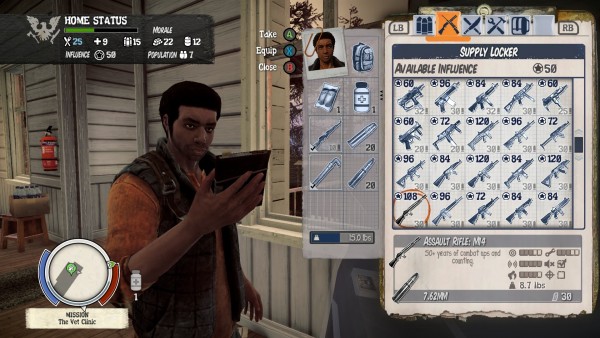 Outside of the core game, the concepts remain very much the same. Breakdown places players into a sandbox like mode where they can choose a certain “Hero” character they have unlocked or start as a random character and try to survive, locate an RV, and escape with each successful escape resulting in a more dangerous environment the next time through. Thankfully the Lifeline DLC adds an entirely new area to explore as well as a variety of new weapons and vehicles to use to keep things fresh while also introducing a few extra twists to the core formula of defending your base during zombie sieges.

Visuals & Audio
While State of Decay: Year One Survival Edition does feature a decent visual improvement to the environment, building interiors, and the character models from the original game, the chances of actually noticing most of these improvements is minimal. Instead the most noticeable change comes in the form of different vehicles now having unique paint jobs which is a nice touch and the appearance of light from flashlights and headlights has also been improved.

Unfortunately despite having an upgrade in textures, the game is still plagued with terrible graphical issues from time to time. While the pop-in rate has diminished it has not gone away and players will still occasionally find themselves driving too fast for the game to keep up with resulting in various pop-ins and this also is the case with some zombies which can become a real issue at low health. Clipping is also prevalent as zombies will often find themselves traveling right through walls and gates. The worst example I saw of this was during a house siege with closed doors resulting in entire swarms of zombies, including a large Juggernaut glitching through a closed door leading to near disaster. 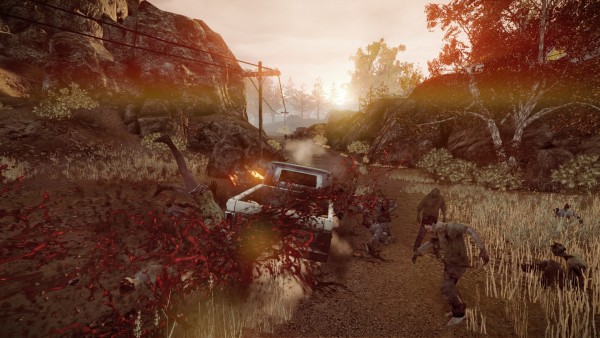 The voice work feels the same sounding as before which is a good thing since it worked well enough and thankfully it seems Undead Labs took the player’s complaints to heart about corny jokes being overused as the joke appears to have been removed entirely from the game and now character lines sound far less repetitive. The title also features great atmospheric music and great sound effects to really raise the tension during dangerous situations.

Overall
The fact that there are still such a large number of glitches in State of Decay: Year One Survival Edition at this point, most of which were prevalent in the original game, is an issue to be wary of especially since the graphical upgrade is only a minor improvement. That being said this is a stellar title that puts a unique spin on the zombie genre as players micromanage a group of survivors all while battling hordes of undead with the constant fear of perma-death haunting their actions and now that all the DLC comes with the package there is more content than ever to be enjoyed here.