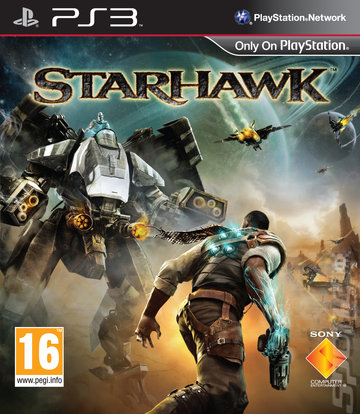 Starhawk is a PlayStation 3 exclusive handled by the developers of  God of War (Santa Monica Studios) and Lightbox Interactive, who were behind the first game in this newly made series – Warhawk. Unlike that first game, Starhawk is technically not a multiplayer only affair, although it’s clear that the solo campaign was far from the main focus during development. It’s a third person shooter with a sci-fi setting and a dash of real time strategy, and it draws a lot of strength from this cocktail of genres and the chaotic gameplay that it allows. Calling down walls mid gunfight is a pretty fresh experience and there’s a lot of fun to be had in the numerous vehicles on call – especially the transformer like mechs, which switch up into jets – Hawks – at the push of a button.

Starhawk goes for something of a sci-fi western vibe: think Firefly but without the personality and charm. It’s set in a future where the world runs on Rift energy, a glowing gaseous substance that pours out of holes in the ground. Sadly for the miners of this precious substance it also mutates people into Rift addicted monsters, but given the value of the stuff no one seems to mind taking the chance.
Players take on the role of Emmett, a former miner who now spends his days as an Outcast hunting merc. He also happens to have had a dose of the good stuff himself, and is somehow able to retain his humanity – even if he does look a bit too fluorescent to be 100% healthy. 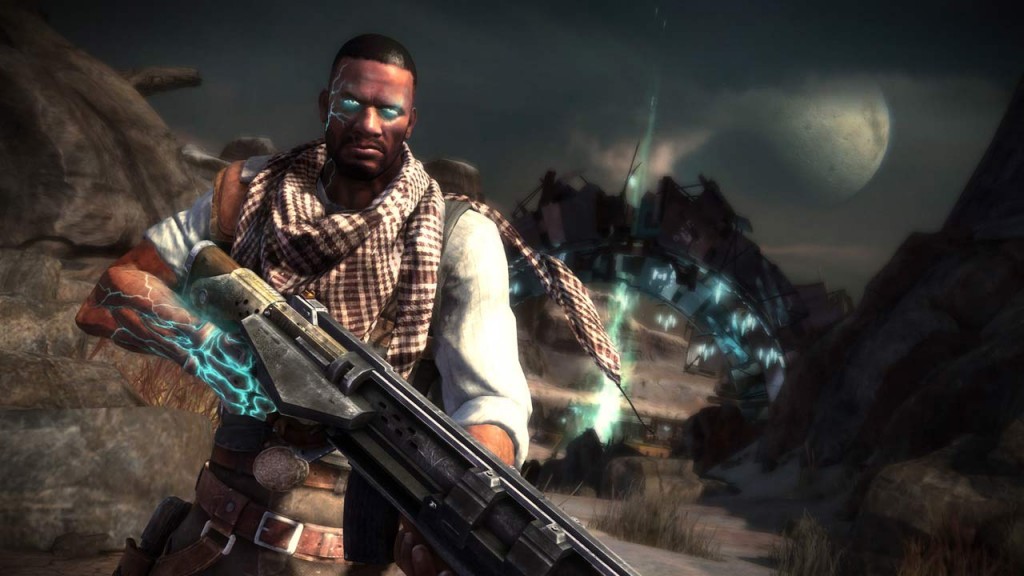 Emmett is something of a bipolar non entity, channelling manly clichés during battle (he’s strangely obsessed with his arsenal) yet coming on all regret and drama during the now standard comic style cutscenes. The story is very much a background detail for the gameplay, and involves the not so shocking return of Emmet’s presumed dead brother who is uniting the Outcasts (otherwise known as ‘Scabs’) against humanity.

Honestly, most of the time I had no idea why I was shooting the hell out of things in a transforming mech/jet, but I was having so much fun in said contraption that I didn’t really care. It’s only when things slow down a notch and the exposition comes in that you realise: no one involved gives a damn about the story. Starhawk is a game that exists to let you shoot stuff, build walls and watch things go kaboom – hopefully any future entries in the series will take the time to at least build some sense of personality for the game that goes beyond token clichés.

All that said, the gameplay in Starhawk is a kick. The genre mash up of real time strategy plus third person shooter creates a set of mechanics a bit fresher than what most games provide, pulled off in a slick and polished manner. The strategy comes in the form of the build and battle system, which allows Emmett to use stored Rift energy to call down structures from his old mate up in the sky (sadly he’s only an old pal in a spacecraft and not some bizarre structure flinging god). Players can modify the battlefield with walls, turrets and more, all completely on the fly. The use of these structures can completely change your experience with the level, especially if you conjure up – or crash down to be more precise – a launch pad or Razorback garage. 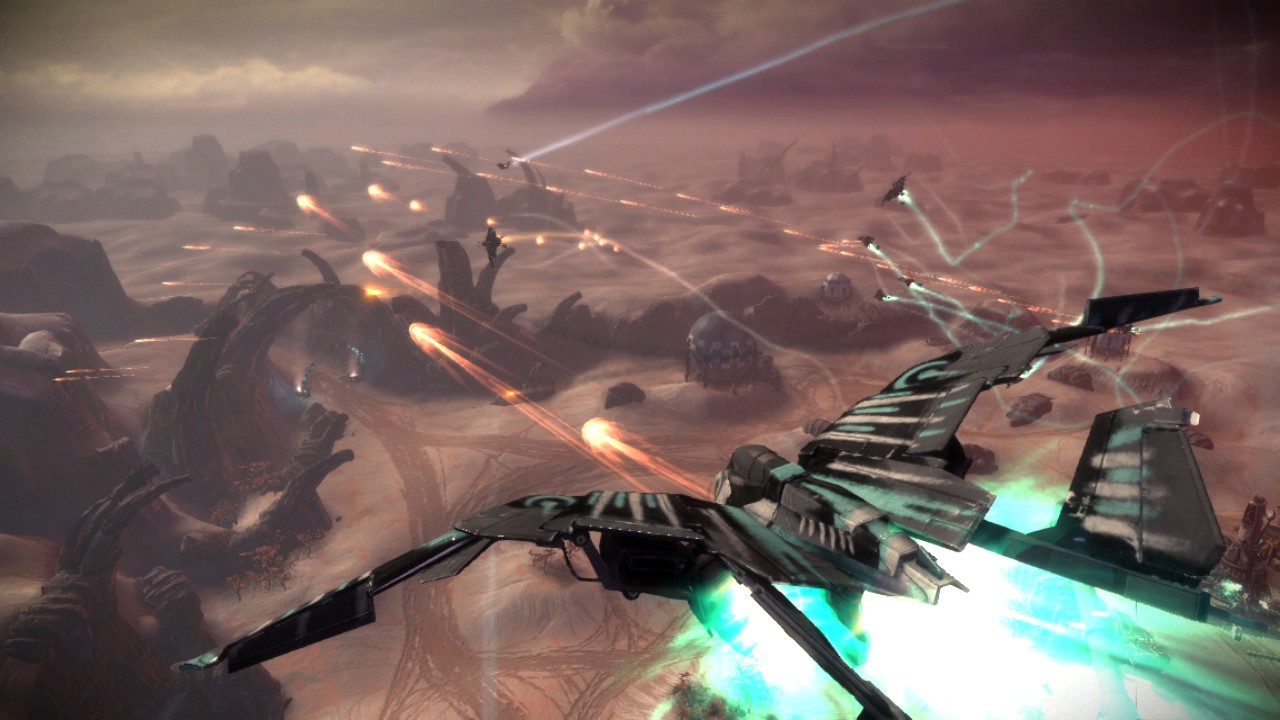 The launch pads are always a sign of good things to come, because they provide you with access to the rather exciting Hawks. Know that bit in Transformers where Starscream seamlessly goes into jet form and blasts off? You get to do that, in space. Being able to go from a goon stomping mech into a missile launching, machine gun wielding jet in the touch of a button is quite simply, awesome. The controls are very easy to pick up and make you feel powerful instantly. You can loop around enemy fighters, launch missile distracting flares and launch your own assault against an enemy in seconds. It does make the simple ground based stuff pale in comparison, but it’s worth it.

Ground based combat is mostly a run and gun affair, with enemies seemingly unaware of anything quite so useful as cover. It keeps things quick and up front, but the limited number of enemy types and easy enough difficulty means its up to you to make your own fun out of it with the gadgets on offer. Summoning up a Razorback (quite literally another name for a Warthog) can often just be a simple time saver and dropped down allies can be a bit thick – no ‘Trent’, you shouldn’t walk off the end of that asteroid…It’s still fun by all means, it just plays second fiddle to the Hawk sections.

Mission structure is bog standard, and as mentioned above you won’t really be too concerned about the motivations involved anyway. One thing to be mindful of is the brevity of the campaign, which struggles to get anywhere near double digit hours with little value in replaying. The final levels are a bit of a cop out too, and the whole thing lacks a good threatening boss battle. Here to save the day however, is Starhawk’s multiplayer-which will be the real reason anyone sticks with this game. 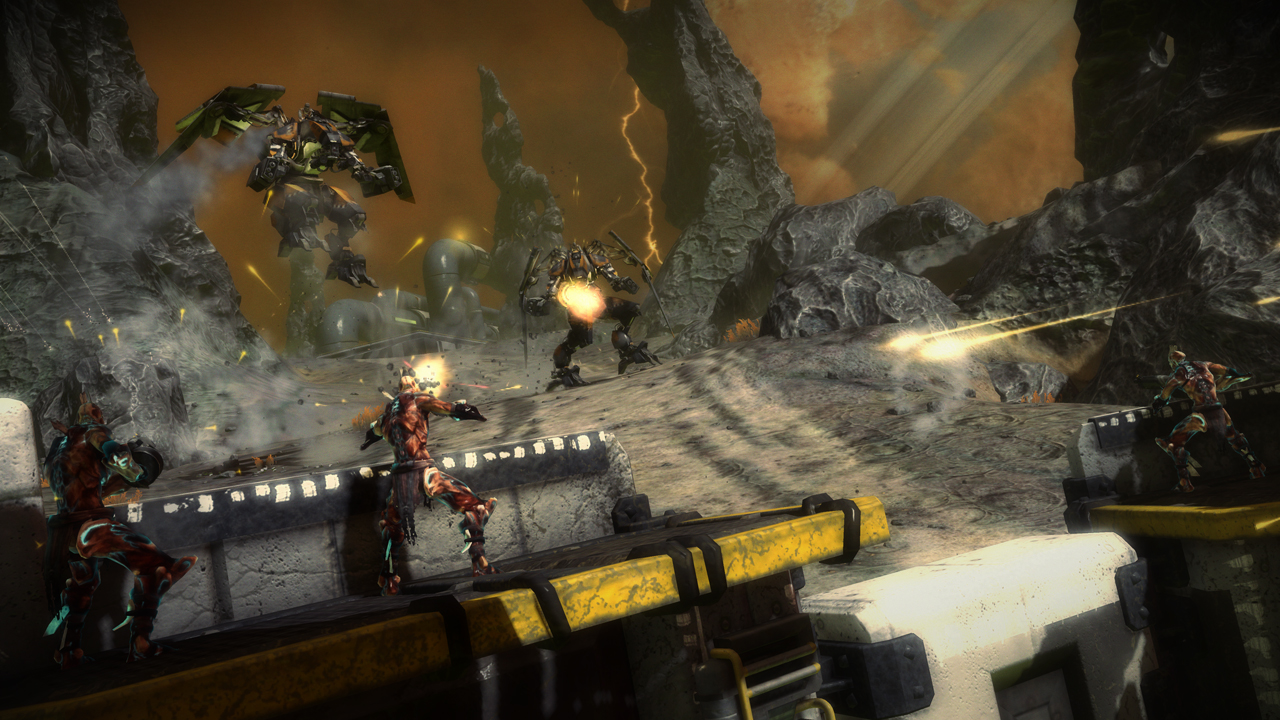 In a word it is chaos. Up to 32 people can play in full Build and Battle glory in modes like Capture the Flag and Deathmatch. The game engine handles everything incredibly well and when you get in to it the whole thing clicks into place – this is the game, not the campaign. Hawks are by no means the strongest players out there and a team limit on structure numbers enforces a little bit of co-operation and strategy. It can be difficult to get a foothold in a match, and if one team of 16 manages to get any edge on the other then it’s pretty much game over: don’t jump into the losing side midway through a match, you’ll die and die some more!

The multiplayer is certainly the selling point for Starhawk – there isn’t anything else like it for the PS3. Single player die hards will find it short but sweet, and for those who like their multiplayer to be with humans in the same room then there’s always local co-op – sadly another horde mode, who’d have guessed?

Starhawk manages to stay away from the lacklustre colouring of some other sci fi games, showing off a handful of alien landscapes that nonetheless theme themselves around the Western vibe. Outer space provides a gorgeous backdrop to a few stages, with highly detailed space stations surrounded by asteroids to fly through and nebulas and stars to admire whilst you blast around in your Hawk. It’s not the best looking game you’ve ever seen but the sheer amount of action it can handle is impressive – especially when the 32 man multiplayer doesn’t miss a beat. The action sound effects are suitably visceral, backed up by a score that mixes it’s dramatic space opera notes with a twang of the Western. 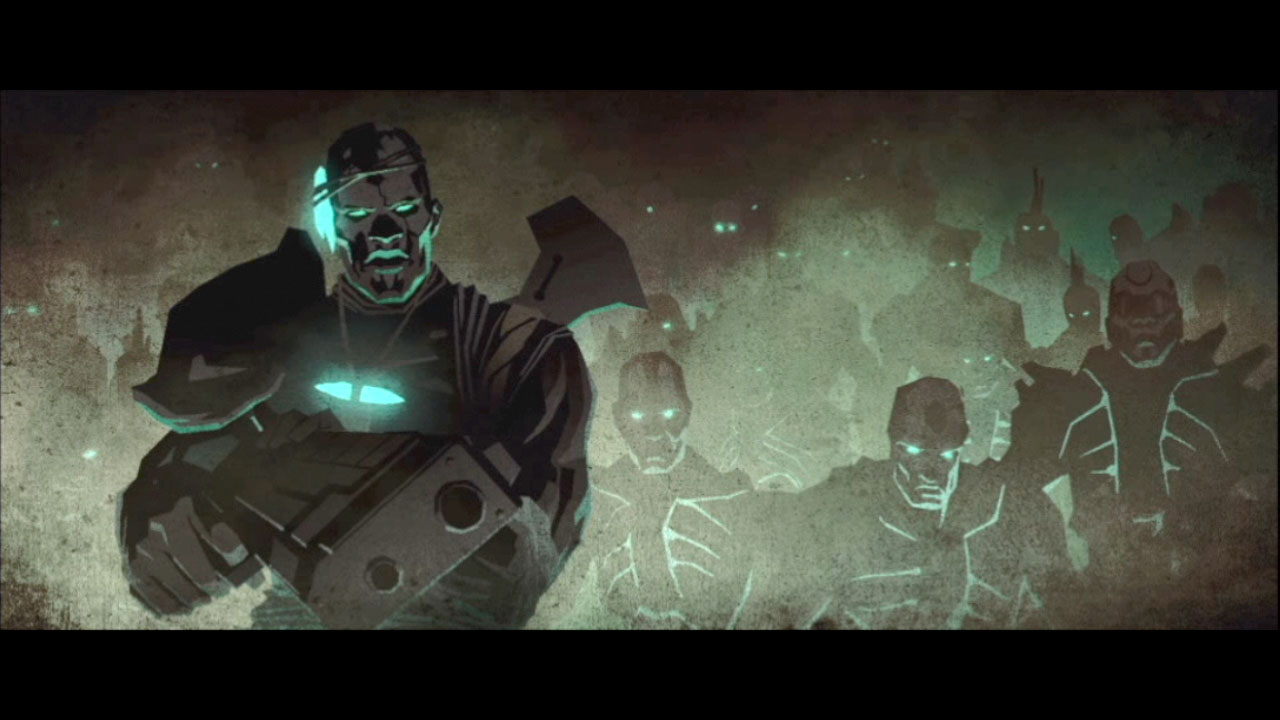 In keeping with it’s lazy plotline, the voice acting in Starhawk is a bit dodgy and the cut scenes yet another entry into the ever growing cheap comic book style collection. Major events that would look fantastic in engine are shunted into 2D sepia. Why sacrifice a solid and colourful game world for such a dull storytelling device? If there’s one fashion in video game design that needs to die a death, then it is the comic book cutscene.

Starhawk is a very good game held back from greatness by some tired out design choices.  The barely there story would be forgivable if not for the humorless presentation and bland characterisation, but for the most part you’ll see past that when gunning your Hawk or dropping turrets on peoples heads. The single player campaign can be filed under short but sweet, with some moments of pure power tripping fun making it a great experience while it lasts. Multiplayer fans will doubtless get a lot more wear and tear out of Starhawk, and the game should also be a big ego boost for the series, which with its neat genre mash up and accessible gameplay deserves to win itself a place in the ever growing list of big name gaming franchises.