So I got some good news and some bad news. The bad news is that after my previous review, I’m completely out of space puns so I won’t be using any for this one. However the good news is that Starborn Anarchist is an exciting, addictive, rewarding, time-consuming gem that many are sure to enjoy. A customisable twin stick shooter with physics-based elements, Starborn Anarchist might not give you a good first impression, but it’s sure to give you a great lasting one instead. 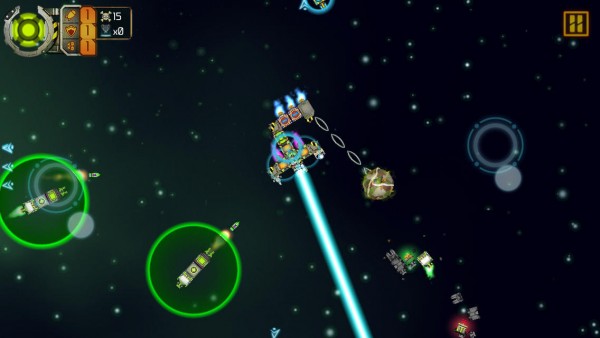 Upon first glance I originally thought Starborn Anarchist was an Asteroids clone and boy was I wrong! This twin stick shooter has players roaming the depths of space, battling against hordes of endless enemies space ships while also collecting items and currency along the way. Action is intense as bullets and lasers quickly fill the screen and massive bosses charge at you with no mercy. You kill, you collect, you get a score, you die and that’s pretty much it. But before you hit that replay button to try and beat your previous score, players are given the choice to upgrade their ship in the garage, and that’s when things start to get interesting. You see the whole basis behind Starborn Anarchist boils down to it’s deep upgrade system. Unlike many iOS titles which will simply just let you increase stats or whatever, these spaceships are customisable by dragging parts to where you’d like them be on the vehicle. The same combination of materials can lead to many potential ships all with different stats depending on how you choose to build it. A great example of this is the boosters for the ship, as placement of these can be make-or-break decisions, greatly impacting the momentum of the vehicle. Furthermore whilst picking up goodies during combat one will notice that deciding which ones to take will take a strategy of their own as weapons, shields and boosters can each be upgraded in different ways via three different types of coloured power ups. There’s a lot to get your head around. On top of all that there are challenges and goals set out for more opportunities to unlock parts and currency as well as over 50 achievements so it’s safe to say there’s a lot of ground to cover for the 100% completionist. 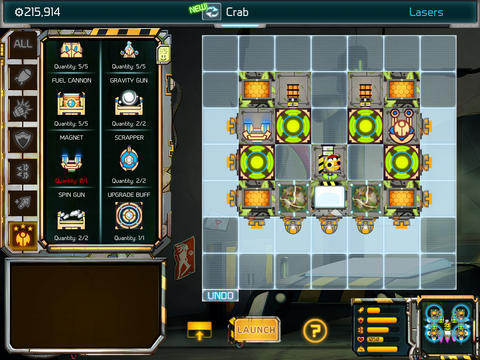 However it’s not all bells and whistles as Starborn Anarchist is held back by some major issues. Controls for one rely a lot on physics and can occasionally be awkward and clumsy. This sadly isn’t just limited to combat either as even while dragging parts around in the garage while customising can occasionally be a battle itself. In-app purchasing at times feels a little encouraged and worst of all this deep customisation experience is poorly explained in a big boring clunk of text. These are all major deterrents from the game so it won’t be surprising if many never see it’s full potential as it’s very easy to get extremely frustrated when playing for the first time. However if the player has the patience to learn the game and give it a second….or third chance, there is an enjoyable and rewarding experience waiting for them. 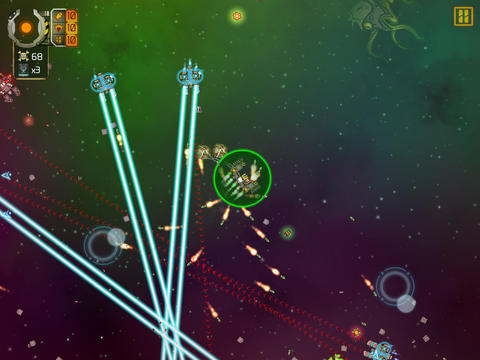 Let’s face it – this isn’t the prettiest game out there, but it’s not trying to be. Spaceships look and feel like lego blocks, and the effects are nothing memorable or spectacular. Debris and bullets chaotically fly across the screen in a way you’d expect them to in a title like this which does slightly add to the adrenaline rush. Sound effects again get the job done without taking anybody’s breath away. The soundtrack is a little more interesting, with a retro vibe reminiscent of the Super Nintendo era of gaming. Still, it’s nothing memorable but it’s nothing terrible either. 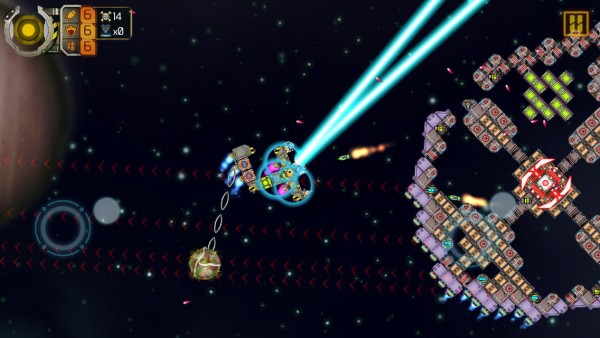 Remember when you were a kid and your parents bought you a Happy Meal and they forced you to eat all the food before you were aloud to play with the toy? That’s Starborn Anarchist. At first it’s not going to be very exciting, and you’ll have to read a long, boring block of text to understand what’s going on. Controls are awkward, in-app purchasing can be tempting and at first it all seems kinda generic. But once you get the hang of things, save up some currency and start customising your ship and earning new parts, things pick up very quickly. The trial & error of creating your own spaceship becomes very rewarding and gameplay becomes more and more addictive as you struggle to become the best space pilot you can be. These greatly overshadow the game’s flaws. Starborn Anarchist only sucks if you suck, and the more you’re willing to put in, the more you’re going to get out. This may not be everybody’s cup of tea, but damn it it’s still a good cuppa!