Razer, being the leading video game peripheral vendor that it is, had released a series of Star Wars related peripherals alongside the launch of the insanely awesome MMORPG, Star Wars The Old Republic. Now, these headphones are incredibly aesthetically pleasing, as is the Razer way. You just can not call any of their devices ugly, even if their performance is sometimes iffy.

Firstly, the headset features fully functional 7.1 channel surround sound that works similarly to magic. However, I found this to be only the case when playing games and watching Blu-Ray movies. When listening to stereo based things, such as music, with the Surround sound turned on, I found that there was a bias to the left ear of the device. However, this will probably only irritate people who listen to music while gaming. You can turn this off though, if you have downloaded the Razer Synapse 2.0 software, which requires registration to run. 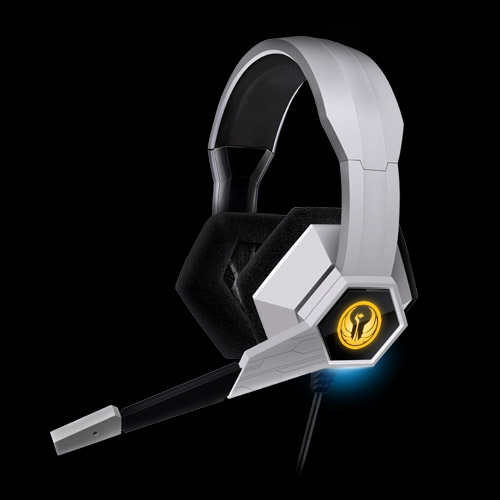 To be honest, the additional software is a must to get the most out of this device. You will need it to be able to configure the many awesome bits of the device, such as the lighting effects and game synchronisation which also affects the lighting of the device. This takes us to our second point.

Secondly, the device has lights all over it. Now then, I’m not entirely sure why it is that it needs to light up, it’s not like we can see things that are sitting on our ears. But I have to admit, the thought of having glowing lights resting over my head is pretty cool. Even further, in a dark room, the lighting reflecting off the walls leaves you with a pretty cool impression. What further enhanced these cool lights, which rest at the base of the ears, was that you can configure them to be one certain colour, or to constantly change colours. I’m the kind of guy that likes changing colours, so I went with that.

The Third thing I want to talk about is the logo’s adorning the ears. These face-plates are defaulted to the Republic logos, but can be switched out with Empire logos easily at any time. As a republic player predominantly, I found that I didn’t really have to switch these out anyway. But when I did, I found it to be an easy enough operation that didn’t require any significant effort on my part. These adornments are back-lit, so they glow around when plugged in. This will surely tick-off your Empire buddies when they come over to play. 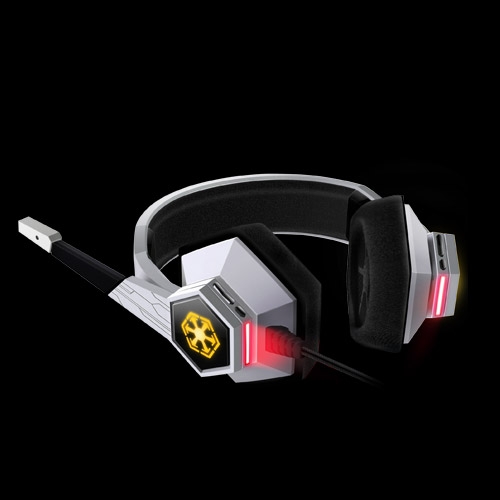 Now then onto my first major gripe with the headphones, and that is the audio quality of the microphone. Throughout my use of the headset in various forms of VoIP situations, I found that people complained of my voice quality being significantly lower than it was in comparison to my current headset. However, they did also note that there a distinct lack of background noise that I would otherwise be catching. When pressed further, they remarked that I was still audible and clear, I just sounded a bit different than usual and it was a little unsettling. However, upon recording my own voice, I noticed that it was a complaint that sounded worse than it actually was. The headphone works fine as a microphone, but just know that these are very much functional over brilliant.

Visibly though, the microphone is pretty awesome. It looks like an antennae sticking out of the wings of a Tie-Fighter, which is pretty awesome. In fact, the headphones have a very Empire feel to them overall, and even within the earphones themselves, is an imperial design.

What is really cool about these headphones is the stuff that is included with them. When you install the Synapse software and get them to read the headphones, you are given an option to generate a code to download some exclusive in game items for The Old Republic. These come in the form of crystals to be used in the construction of your characters lightsaber. However, the crystals are more of an aesthetic option, considering their low base stats of +4 to endurance. But still, its a cool way to show off in-game that you own this cool pair of headphones. Also, the crystal glows green and black, which is pretty awesome. 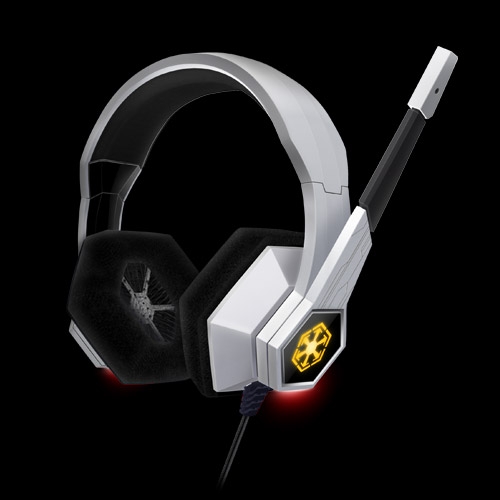 Another bonus that I want to talk about are the stickers included with the package. These stickers come in Empire and Republic variants and can be used to stick on most surfaces. I adorned the side of my PC case with an Empire sticker and it looks pretty cool sitting there. I’m saving my Republic sticker for when I get a new PC case for my eventual graphics card upgrade (those things are getting huge). Of course, this being a Razer product, means that there are also a few Razer branded stickers included in the package, so that everyone knows how much a fan you are of Razers products. I currently have a sticker on my portable hard-disk drive and my 3DS (so if you ever find a blue 3DS with a Razer sticker on it in the street, email us about it).

While you may be thinking that these headphones will only work with Star Wars The Old Republic, I assure you that they do work well with other games of varying genres. Games that I have tested these with include: Star Wars The Old Republic, QuakeLive, Driver: San Francisco as well as various movies and youtube videos. Actually, these headphones worked quite well with Blu-Ray films played on a PC, so if you watch those with stereo headphones and you want a pair of Star Wars themed headsets to go with your new Star Wars Blu Ray collection, these might be the headphones that you’re looking for.

Overall, it is hard to recommend these headphones to someone who is not a Star Wars fan, but it is very easy to recommend them to someone who is. They’re a versatile headset that you wont be disappointed with if you currently lack a 7.1channel headset, but if you do, you will probably prefer your current pair. If you know someone with a pair of these, you might want to try them before laying down your money on them. However, if you’re a Star Wars fan, I’d recommend wasting your money on a pair immediately, especially if you’re a player of The Old Republic.