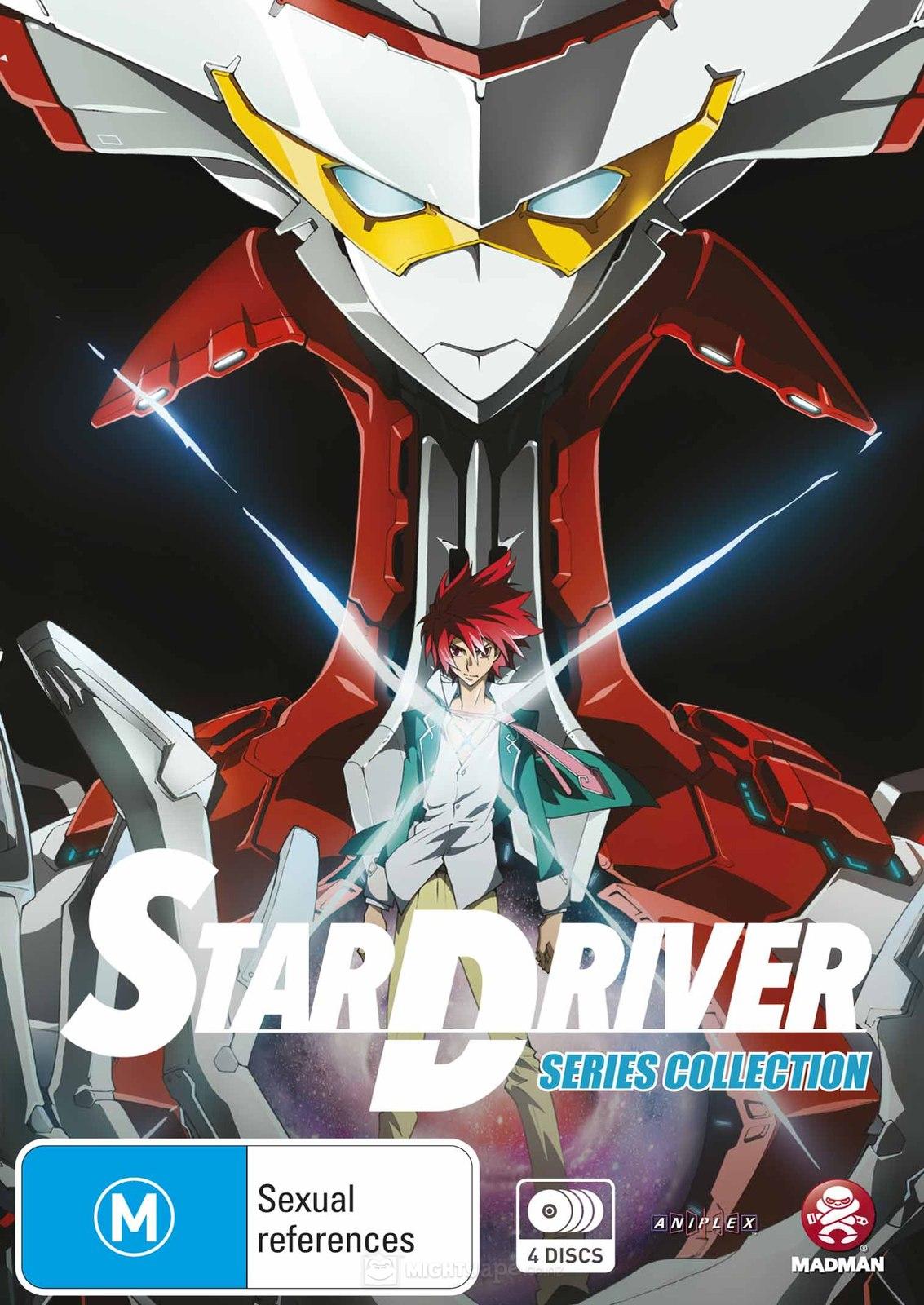 Overview
Dashing Entrance! Have you ever thought that mech animes were missing something? Was the answer that you came to ever bishounen characters? Well regardless, it’s happened. Star Driver, one part mecha and another part pretty boys…and sometimes girls. Straight from Southern Cross Island comes the hero who shines like justice. Dazzle the Stage, Ginga Bishounen! 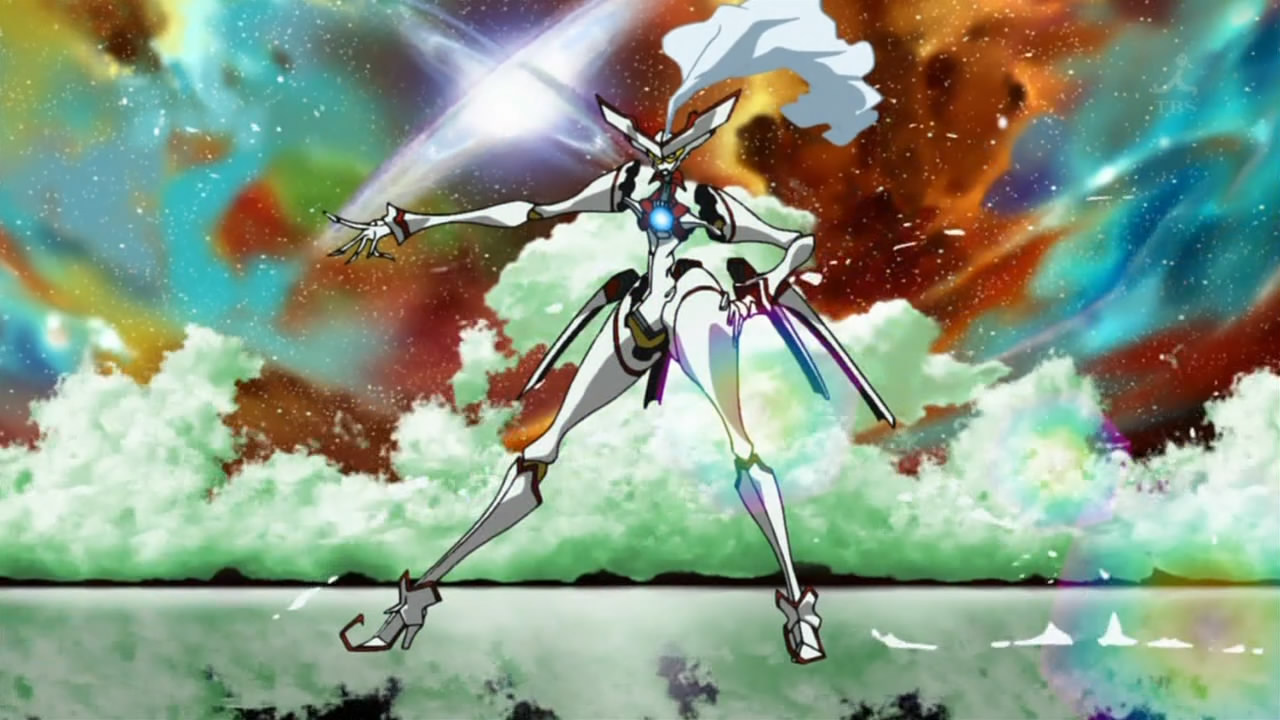 What do you mean a flair for the dramatic?

Story
Whilst taking a stroll down the beach, childhood friends Wako and Sugata find someone washed up on the shore. After saving his life, they discover that his name is Takuto and he is starting at Southern Cross High School. Having missed the ferry, he naturally swam from the mainland…That’s Takuto in a nutshell. With their first day of school over and after being told not to explore the abandoned gold mine behind the school, Takuto sets off to explore the abandoned gold mine behind the school. Whilst there, he witnesses a group of mysterious individuals kidnapping a girl. Unable to save her, Takuto is knocked out whilst the girl is taken into the mine and the secret hedquarters of the Kiraboshi Order of Cross. The organisation strives to break the four Maiden Seals, which are held by four Shrine Maidens, of the island to free powerful robots known as Cybodies from the confines of a space known as Zero Time.

Having broken the first Maiden Seal, Kiraboshi are free to activate their Cybodies within Zero Time via a machine known as an Electric Bier. Doing so freezes time for all people who aren’t connected to the Cybodies, allowing combat to take place completely unnoticed. With their sights set on Wako, another Shrine Maiden, Takuto appears within Zero Time and makes his dashing entrance as the Ginga Bishounen, literally the Galactic Pretty Boy. After summoning his own Cybody, the mysterious Tauburn, Takuto defeats Kiraboshi’s Cybody and saves Wako…And this all happens in the first episode. 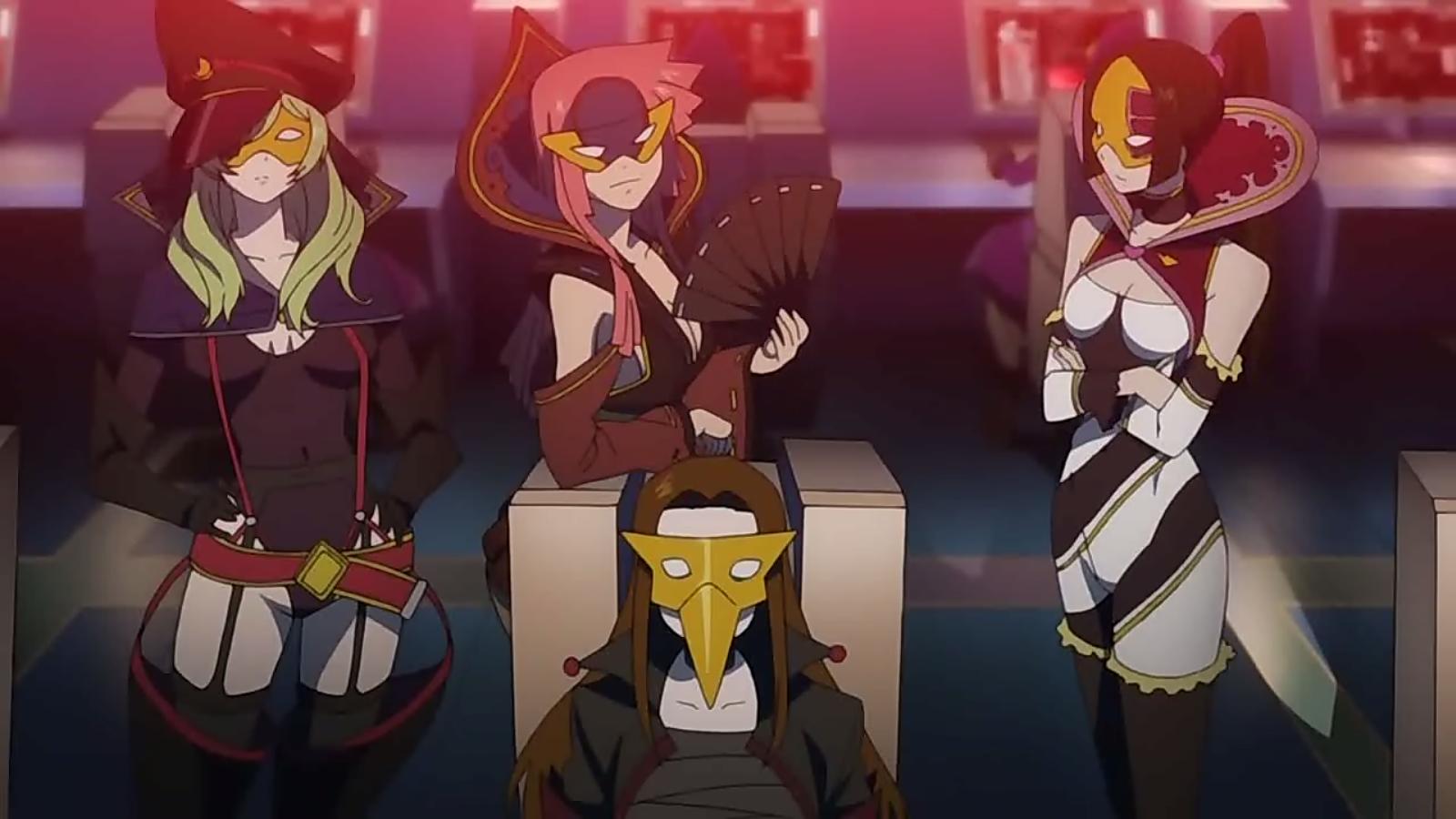 The show isn’t all bishounen…

After the introductions, Star Driver essentially becomes a challenger-a-week kind of anime. Each episode, one of Kiraboshi’s illustrious members tries their hand at besting Tauburn, having come to the arrangement that whoever wins shall become leader of the entire organisation. This causes some degree of infighting between the Brigades of Kiraboshi, various factions that make up the organisation proper, with each striving for the lofty heights of leadership.

Though the attacks are constant, they never feel like anything more than an inconvenience. With the immense and seemingly ever growing power of Tauburn, there never reall seems to be any danger. Though knocked down, Tauburn generally gets back up fairly quickly to mete out justice and look pretty doing it. The fact that Cybodies can only activate in Zero Time also means that the battle literally take no time at all, leaving Takuto and friends to freely finish the meal they were eating. You know, prior to the whole fight for humanity thing. These factors, along with the series overall pacing, place the Cybody conflict somewhat in the background to school life and the series of love stories that blossom within. Unlike other series where characters struggle to hide their true power and deal with the weight of their decisions, neither Takuto nor members of Kiraboshi ever face any consequences. Even when one particular battle results in fairly substantial damage to the real world, it is simply forgotten about, as if no one saw the giant flash of light that nearly blew up half a forest. 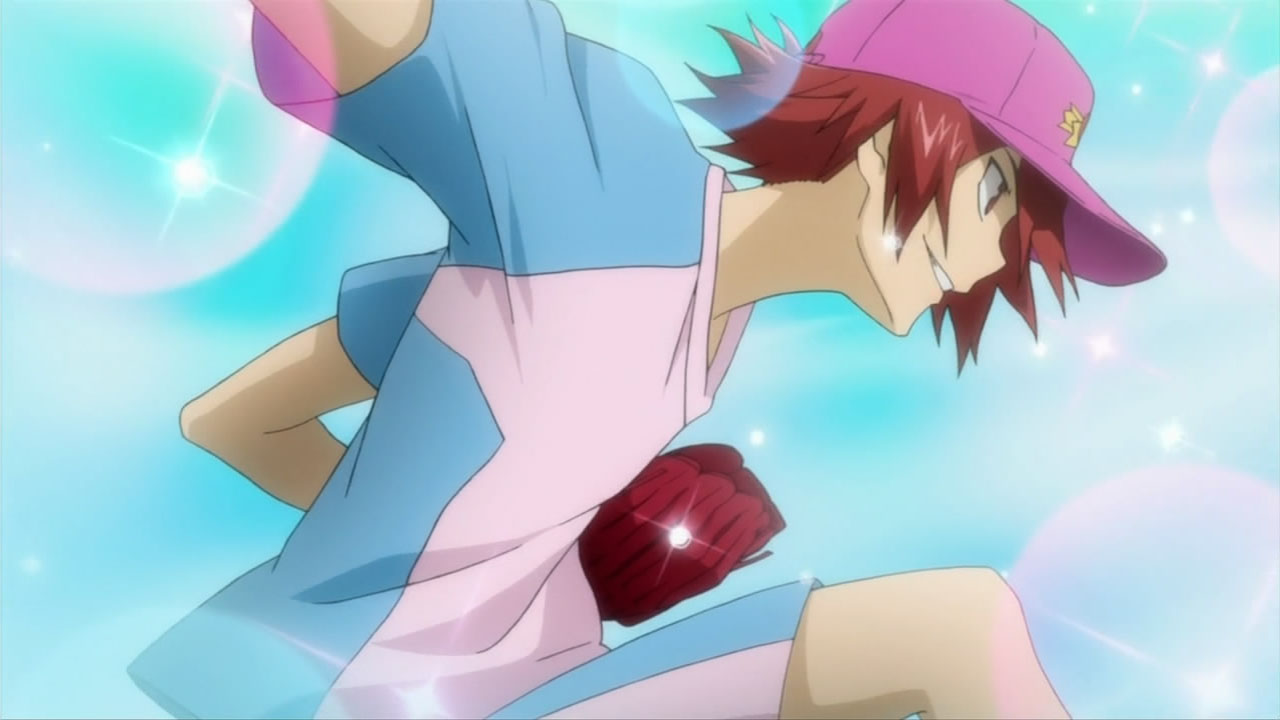 …though it definitely has its moments

Over the course of the series it is revealed that a majority of the members of Kiraboshi are also students of Southern Cross High. This isn’t really a spoiler, due to the fact that Kiraboshi’s mastery of disguise extends to wearing a face mask. Also there aren’t too many green haired girls roaming the island. The amazing thing is that some characters don’t recognise them, not even other members of Kiraboshi. Though they have their suspicions, it isn’t until they perform their secret salute that they fully understand that the short, pouty pink haired girl from Second Brigade, is the same short, pouty pink haired girl from school. Shocking I know. That being said, there are moments where the main characters break this trope, immediately seeing through people’s ploys and recognising that something is amiss.

The culmination of the series also feels a tad underdeveloped. By the finale, a fair few details have been left open ended and a number of questions raised. Takuto’s entire reason for swimming to Southern Cross Island is only hand waved, not receiving the attention such a moment should garner. Details regarding the Cybodies is also fairly vague. Though the lack of knowledge on their origin creates an air of mystery, certain aspects of their abilities were left fairly vague. Though this allows the Cybodies to appear unique to one another, it also allows deus ex machinas to appear, somewhat limiting the intensity of the battles. 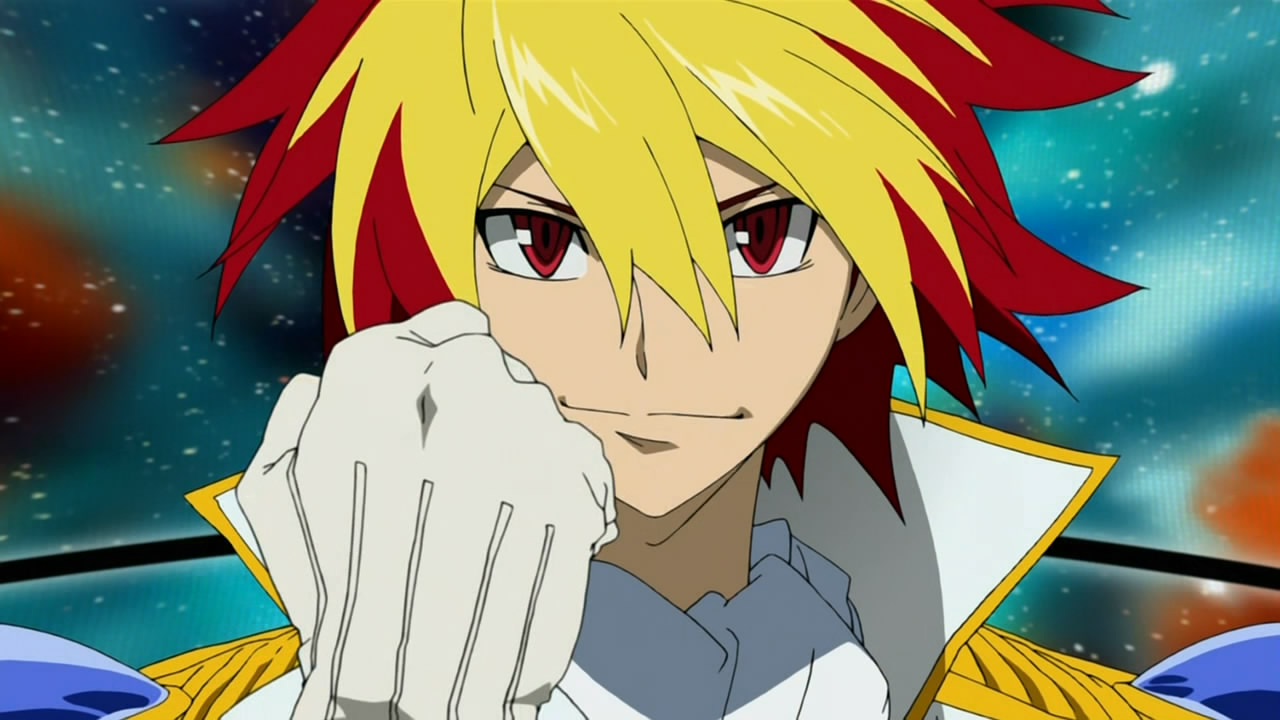 The Galactic Pretty Boy…can’t argue with the galaxy

Visuals
In a series that features a person known as the Galactic Pretty Boy, you’d expect the visuals to be beautiful…and you’d be right. One of the best things Star Driver has going for it is the visual elements. First of all, Takuto. Apparently one of the most gorgeous people ever. Though it seems he’s in good company. Essentially every student, and most teachers, of Southern Cross High are highly attactive…and equally as lustful. School life seems to revolve around nothing but trying to attract members of the opposite, or same, sex. The Drama Club even uses their excercise routine as fan service to gather more members. So…there’s that. The more major characters also feature a much more noticable colouring scheme. Takuto, Sugata and Wako, being the main characters, are mainly the prime colours red, blue and yellow respectively. The Cybodies themselves are also visually appealing and varied in their designs. This lends to the mystery of their powers and creates interesting fights. 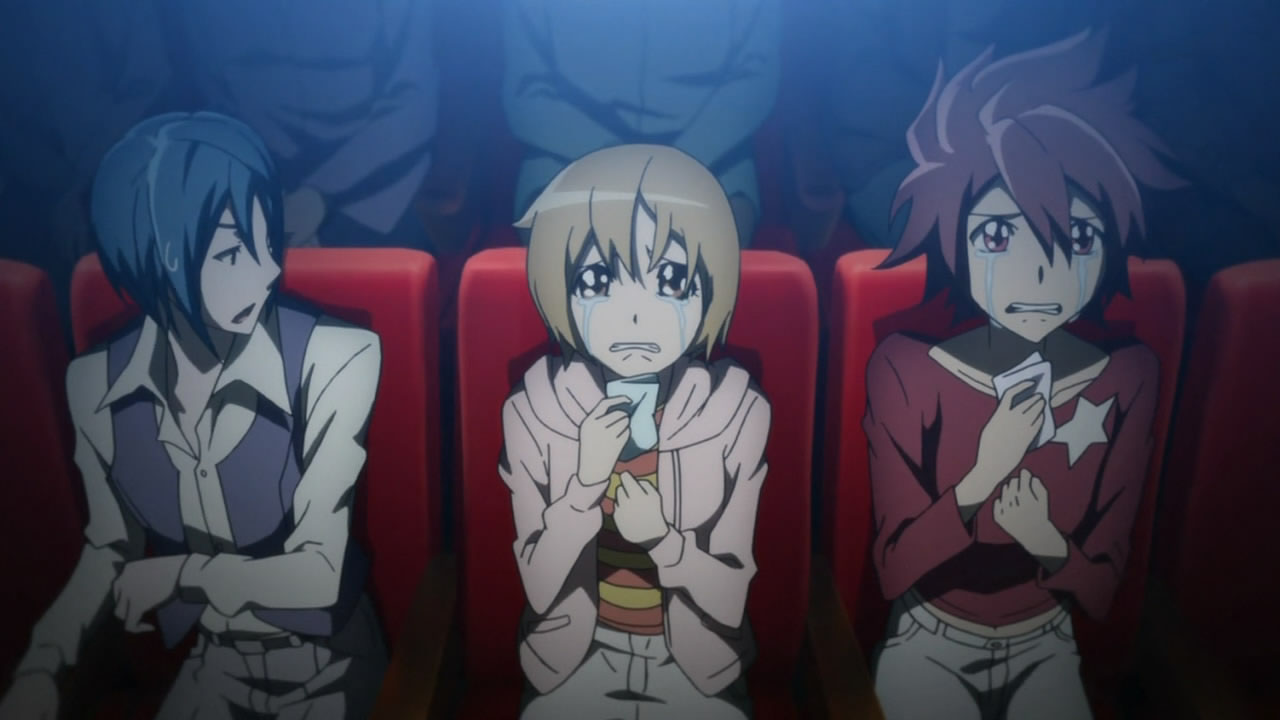 The combat itself is animated well. Though the battles are often brief, they feature a lot of acrobatic animation and flair. Tauburn rarely does anything without a flourish. Much like the characters, Star Swords are also of varied colour, leading to a lot of very vibrant clashes. The space in which the Cybodies battle is also visually distinguished. Whilst in Zero Time, the scenery is replaced by a background depicting space. Stars and galaxies encompass the entirety of the realm, seemingly lacking sky or ground. Occasionally clouds or fog will also appear, as the Zero Time landscape tend to change between fights. The visual style of the realm breaking is also interesting, as it adds a two dimensional element to a seemingly three dimensional space, such as when the backdrop “shatters” whenever Tauburn enters.

The animation receives a significant bump in the final episode. The Cybodies appear much more defined than before, with a slightly different and more intense style. The characters also move more fluidly than in the rest of the season, adding definition to their actions. Both Cybody and person also show much more damage than they have before, propotianate to the stakes of the final episode. Also featured are some atistic moments wherein the animation cuts to black and white. This comes with a sketch like style, intensifying certain moments. 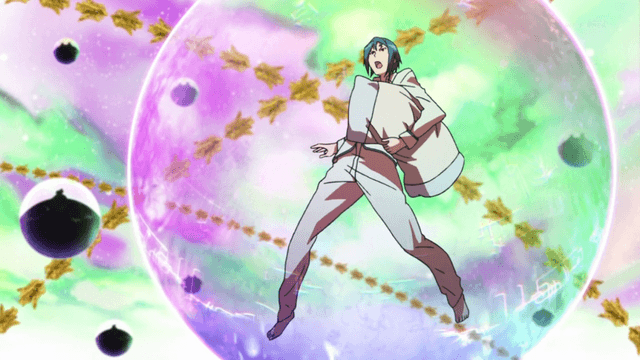 Zero Time can be anytime

Audio
Much like the visual, the audio of Star Driver is very triumphant. Whenever Tauburn enters the fray, he is met by the fanfare of trumpets, and an orchestra to back them up, making for a very heroic and showy entrance. Battles themselves will also often feature guitar for the more intense moments and piano for those of wonder and confusion. Surprisngly, scenes of regular social interaction will occasionally feature a soundtrack that, amongst the other instruments, includes an organ. This adds a sense of drama to what are visually less intense scenes.

Music is also somewhat prevalent in the story itself. Whenever a member of Kiraboshi decides to challenge Tauburn, the scenes are accompanied by the song of a Shrine Maiden. Being serene songs, they often contrast the violent visuals of a Cybody activation, creating an odd sense of beauty and sadness. Each Maiden possesses their own unique song and as the series progresses, each of the four Shrine Maidens express their voice. 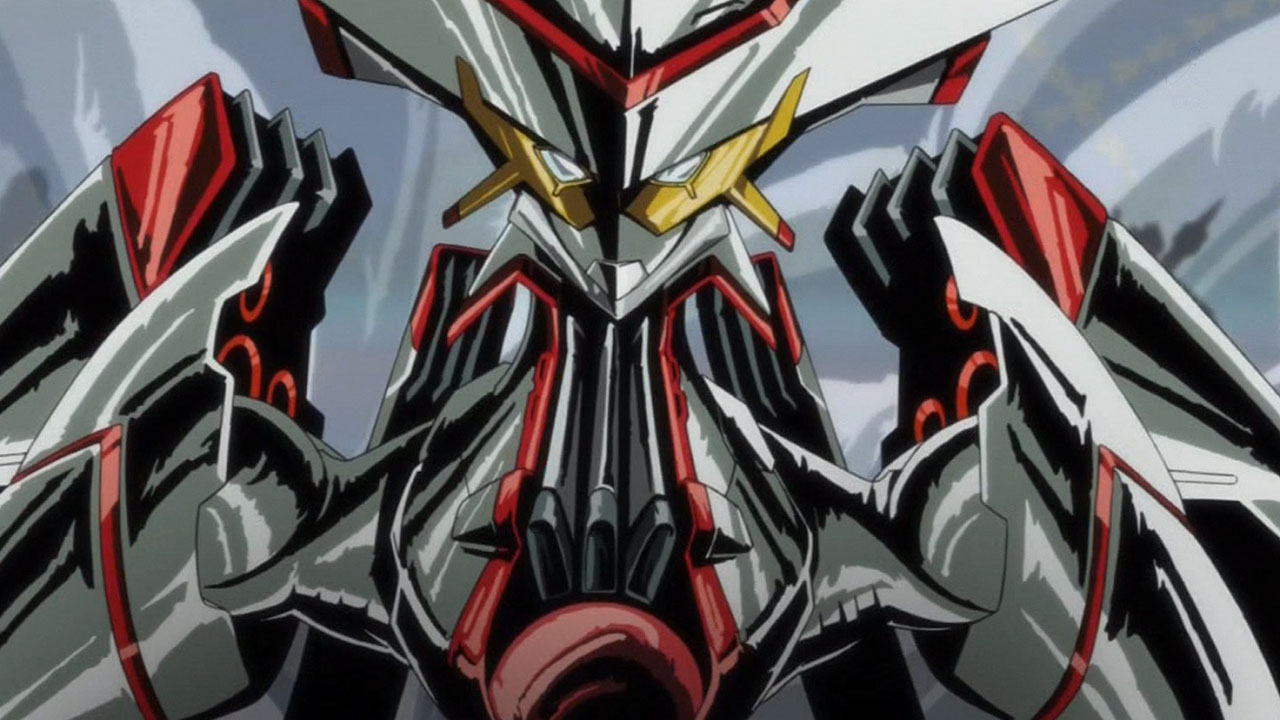 Now that’s a hell of a pose

Extras
Star Driver is fairly light on the extra features. The collection features a textless version of the second opening “Shining Star” and two versions of the second closing theme “Pride”, featuring different visuals. The traditional trailers for other productions are also present.

Overall
Star Driver is an interesting series. Essentially attempting to be a mix of mecha and bishonen, the experience tends to be watered down by the conflicting elements. The sappy love stories about highschoolers seem rather inconsequential next to the threat of the Cybodies but, at the same time, the conflict often takes a back eat to said love stories. The overall balance just seems off. However, whatever it is Star Driver is doing, it looks good doing it. All in all, though the plot may not be the strongest element, the series as a whole isn’t bad. I mean, how many mecha can pull off the musketeer look? Not many, I bet.