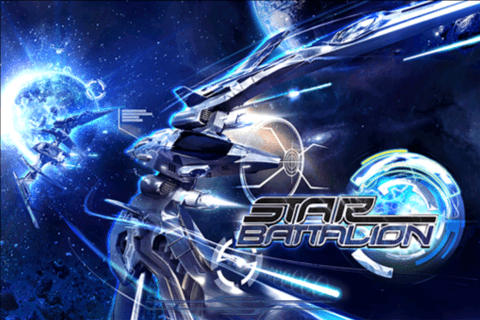 Overview:
Ever felt the need to fly through space and shoot down enemies with laser beams and missiles? Well you are in luck because Gameloft’s Star Battalion has stepped up to the plate. Reminiscent of games such as the original Star Fox and Rogue Squadron we see a brand new space shooter arriving on the Appstore.

Story:
Players take control over pilot Sonan Firehawk who leads the resistance against the Royalists that have taken control of the galaxy. But Star Battalion takes a bit of a twist when it comes to storytelling on the iPhone. Sure there is the premise of the story told during the game itself that gives the player the main reason they are fighting, but it expands beyond that with releasing a free to download comic book App which explains the backstory to what happens during the game which is a nice touch.

The actual story however feels like a complete knock off of other video games. Especially when you consider that there has been a rebellion in space, with the true king thrown off of his throne and been usurped by his undeserving brother. Now you and your squadron of rebels must do their best to reclaim the throne. Sure there is some originality here but if the words Rebel Alliance and Rogue Squadron mean anything to you will be able to predict the story as it unfolds.

Graphics & Sound:
Perhaps one of the most impressive aspects of Star Battalion is its gorgeous graphics. Every planet you do battle upon, though extremely familiar, is varied and unique in its own way. Enemy ships look great as you pepper them with your lasers and destroy them. Along with the gorgeous graphics are the players own choice of vehicles, though these are limited to only four. 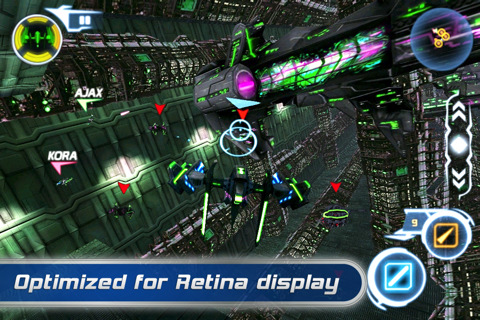 Characters are well drawn though do not move while they speak, instead staying as stationary faces stringing out long lines of dialogue. Which is another nice touch in the end, because the game itself is fully voiced. Your wingmen will give you warnings when you have an enemy on your tail and thank you for saving them if they are under attack. This is extended further as mission briefings and speeches between pilots are fully voiced by voice actors that fit their rolls well enough, but could use a bit more emotion.

These graphics come at a price however, as many times players will experience extreme lag if not total freezing gameplay when too much action is happening on the screen. This completely ruins the immersion of the intense dog fighting when the game suddenly lags into a picture show. The voicework itself suffers sometimes due to dialogue being played over and over again, which may be another factor of the lag, or a bug in its own right.

Gameplay:
As the player beings their venture into the various worlds of Star Batallion they will soon come to understand that nearly every mission focuses around seeking and destroying various enemies or pieces of equipment to weaken the Royalist forces. There are a few different missions such as finding a specific item that was left behind or following a group of fighters to break up the fighting. This is accomplished by flying your spaceship around various planets and destroying your objectives without dying of course.

But the method that these battles take place is spectacular. You will be spending most of your time in dogfight battles, while the rest is simply navigating from place to place, usually to shoot down more enemies. These dogfights are only improved thanks to the controls and the aiming system which provides two reticules for better lock on performance. 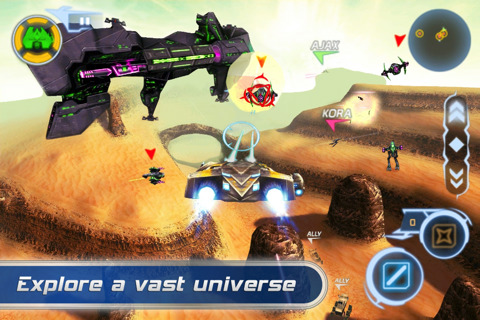 Enemy AI starts out low enough, as players will be able to destroy the enemy with barely any challenge. This however slowly changes as players advance through the game as in later levels enemies will become just as intelligent as you are. This increases the fun of the game as the Royalist ships pull off different acrobatic stunts simply to avoid a missile attack, or make their way behind you to riddle you with laser fire and leads to a very exciting experience.

This experience is further heightened with the fact that Star Batallion supports full accelerometer control, or Tilt control. While there is the option for the more conventional joystick that works suitably for the flight simulation, the Tilt controls are the highlight with their precise movement recognition. Players will be able to tilt their iPhone to control where they are flying and perform acrobatic stunts such as barrel rolls and U-Turns with swipes of their finger in the corresponding direction.

While not as precise as the joystick, the Tilt controls provide more immersive gameplay as you quickly twist your iPhone to the side to avoid enemy fire and perform a U-Turn swipe and take your enemy down from behind. There are two buttons for your lasers and missiles on the screen as well for easy access to your weaponry. The only fault with the Tilt controlling comes at the times the game confines players inside of tunnels and tight spaces, whereas crashing into things can cause instant death. These areas, while not impossible, are more difficult with the Tilt than with the joystick.

Star Batallion also features a multiplayer mode where players can play co-operatively together. There doesn’t happen to be any deathmatch mode which is unfortunate, because dogfighting with others on your iPhone would be awesome. But that doesn’t mean that Co-op isn’t less fun. Up to two other players can play beside you through the campaign missions, which doesn’t truly add anything to the game, but does make the experience more fun. This Co-op mode is handled through the Game Center which makes finding friends and other players simple. 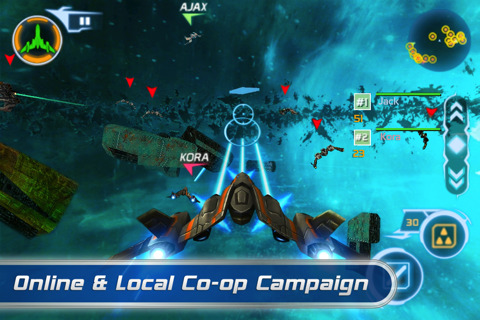 That doesn’t mean that the game itself isn’t without other problems. There are a handful of issues such as clipping with ground and invisible walls that force the fun out at certain parts. Such as a level full of space debris where you will notice your own wingmen flying through the debris chunks like they were nothing, only to be torn to pieces like tissue paper. Another issue is when the game forces players to listen to enemies talk, even though they are on the screen and able to be shot at. This means that although your enemy should literally have been blown up countless times, they will be alive still until the end of their speech, only to attack fresh.

Overall:
Star Batallion from Gameloft truly sets the bar for what spaceship battles should be on the portable iPhone. With superb graphics, exciting dogfights, and very good controls there is so much done well that it casts a large shadow over what is wrong with the game. Sure the story is run-of-the-mill but that doesn’t take the fun away, but the lagging and freezing does become a problem. Though in the end when the game is working perfectly it is a sight to behold.
I give Star Batallion for the iPhone/iTouch:

A review code was provided from Gameloft for reviewing purposes. The game was played on a 3G iPhone and played through the main storyline and delved into the online co-op experience. Added a few friends and will be flying the stars again soon with my wing-men.