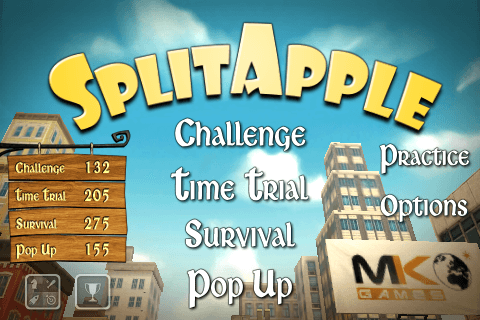 While apples may not be the main focus of this game, despite the ability to shoot the ones in the tree for little bonus points, the name of the game is still SplitApple. SplitApple is an archery game, and while my actual archery skills are rather embarrassing, I have been known to enjoy the odd archery based videogame. However up until this point in time all my experience with such titles has only been on the Wii. Made for iOS devices by independent games company MKO games, SplitApple takes the fine sport of archery and condenses it down to a game that can fit in the palm of your hands. 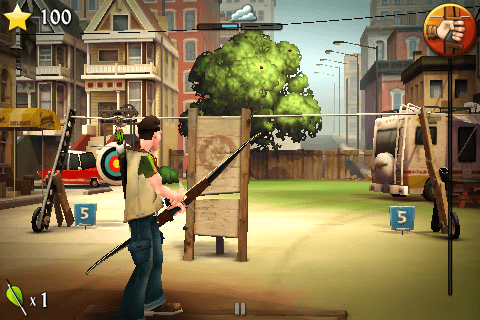 When describing the gameplay it sounds simplistic. Aim your iPhone using its gyroscopic sensitive positioning, pull back the bow icon, release and watch as you spectacularly hit a bull’s eye. In practice however, there is a steep learning curve coming to terms with the aiming. Much the same as real archery, you need to tilt your device with precision in order to hit your target. It takes a number of trial and error runs until you will start to get the hang of the controls, often tilting into some slightly awkward positions in an attempt to adjust your aim.

Within the game there are four different modes of play, the first being challenge mode. Challenge mode is exactly what it sounds like. You take aim, pull back, and let the arrows fly as targets become progressively more difficult to hit. Starting with the standard target, which will then move further away, then adding some mobility to the target as well as blockages, it can get a little frustrating to take aim especially if it is your first time playing. Time trial is a little easier to play for new comers. Rather than requiring you to adjust for distance and obstacles, you can just practice aiming in the one spot and shoot as many times as you can within a minute. While this can get tedious, at least there are other modes to test out. 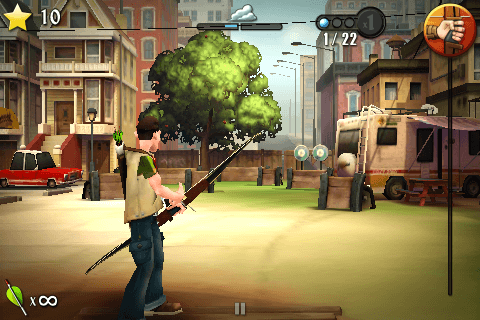 Much like time trial, survival mode has a fairly static target. The goal here is to keep as many arrows in your quiver as possible, while getting the highest score. With a base start of 10, you are able to earn more arrows by scoring 9 or 10 by hitting bull’s eye or near enough. This will give you two more arrows to use. If you are rather good at the game, this process might last a while. But chances are, if you are rather good at it you won’t complain about extended gameplay. The last mode is pop up, which sets the area up like a shooting gallery with targets popping up (as the name may suggest) at random places. This is the most frustrating of all the modes, given that it will require you to have the aiming mechanics down rather well.

The game isn’t all frustration and difficult aiming however. A note worthy factor is fantastically accurate function of the wind. Many times, particularly in pop up where there is limited time to take aim, I have hastily shot without considering the wind, only to see my arrow veer off to the left missing my target with embarrassing imprecision. Despite my only story to prove the well-designed physics of the game world being negative, I still admire the attention to detail. 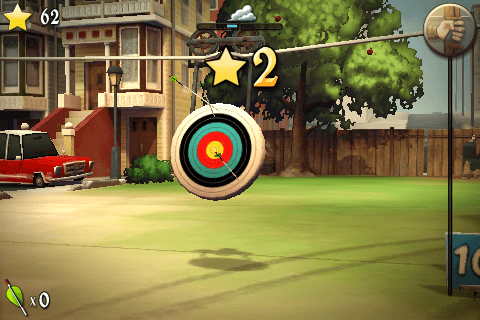 While there isn’t all that much to look at, given that you are mostly focused on the target, the graphics are rather well designed. The animation of the target swaying back and forth after being hit adds some great detail and realism to the game, while the environment is nicely rendered in a cartoon-like style. I’m a little curious as to why the game is set in a backyard between terrace houses and near a mobile home, considering it seems a little dangerous for passers by. However, I assure you that any injuries suffered are completely virtual.

The audio is nothing spectacular. The sound effects fit the on screen action perfectly. The only complaint I have about the audio is every time you fail to hit the target, you will be punished with an annoying “miss”. I’m not sure if it is annoying in its own right, or just because you have failed, either way it did get on my nerves. 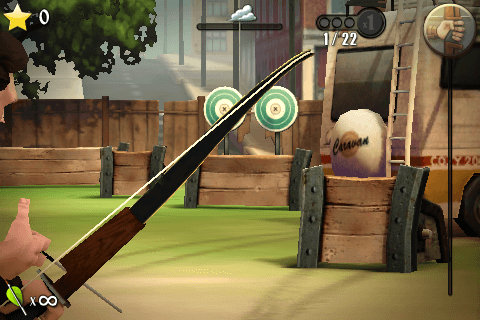 Once you get the hang of the aiming mechanics, the game works fine and is rather enjoyable until it gets to the point of being tedious. If there were a little more competition involved in the game to drive you along, apart from high scores and leader boards, then perhaps you would be more likely to stick around. Lacking the glorious romanticism of what I imagine ye olde archery competitions to be like, SplitApple is still a nice little game to play around the house. Due to the gyroscopic based aiming, it is probably not my first choice to play on public transport, or out in public view at all for that matter, still an alright game to play away from public eyes.