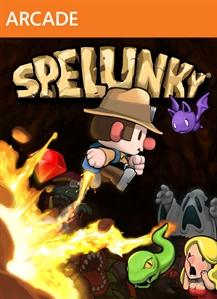 Overview
Spelunky first came onto the gaming scene back in 2008 as a free-to-play PC title, where players had the main objective of trying to survive throughout several worlds until reaching the end. This may sound basic, but in all honestly, Spelunky is far away from your standard platformer. Imagine a game that is ready to kill you at a moment’s notice. You only have one life, and you have to utilize your findings to simply stay alive until the end. Add in some HD visuals and multiplayer, and you have the new and improved version of Spelunky for the Xbox Live Arcade. Yes, this is quite a special title that is sure to capture the attention of the old-school crowd, but is there enough content in Spelunky to justify it’s asking price? Let’s find out. 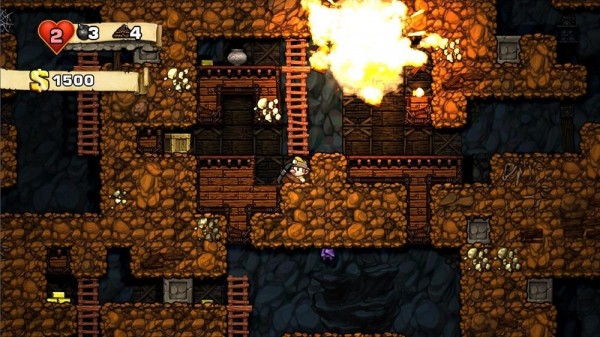 Gameplay
Normally I would start out a review speaking of the story within a game before touching on gameplay. There is a slight narrative in place for Spelunky, but it really only exists to suit the purpose of progression. That said, not having a sufficient plot takes nothing away from this title, as there could be a story about talking ice cream cones and Spelunky would still be just as satisfying. Players start out by picking one of four different characters, and then get thrown into the first stage right off the bat. As I mentioned, Spelunky is a platformer, and all the standard fare for the genre are in tow from the get-go. Your main character can jump over pits and on a foes’ head, run right over narrow passageways, and climb up platforms that he (or she) has latched onto. For offense, our spelunker has a small little whip that can pop foes at close range, and can lift just about anything to throw at enemies. It’s a simple formula that feels solid, leaving no room for argument when you find out the game’s true #1 antagonist. Death. 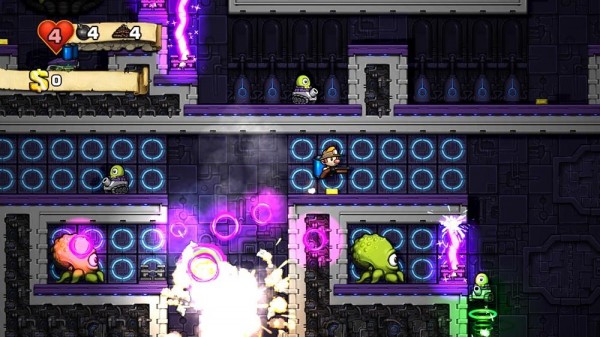 You see, each stage has your standard lot of enemies and their main job is to prevent you from finding the exit. Spelunky relies heavily on exploration, meaning the player will have to find their way to the end by using the tools they discover throughout. Our little hero starts out with some rope and grenades though, which both play a large role in your safe travels. Ropes can be tossed to move up or down in the level – preventing a long fall, and grenades can blow up enemies and destroy the very floor underneath you to create a shortcut of sorts. These items come in limited quantity, but can be bought at shops with the hefty supply of gold and gems scattered about each stage. Other items such as spiked shoes, glue (for sticky grenades), and even an ice gun can also be purchased, adding to the wide array of gadgetry.

The core of this game’s mechanics are built around the fact that every stage is randomly generated. Those of you who have played the greatness that is Toejam & Earl will feel right at home with this, but Spelunky takes that one step further and only allows each player one life – with a hero that can only take a few minor scrapes before dying. The punishment for death is severe as well, as death means having to start all over. Personally, I am not a fan of overly challenging games. I never was big on Mega Man, and Contra is still a game I have never beaten to this day. Spelunky could easily make the player break a controller, but it doesn’t. In fact, I can’t think of one moment where I was truly frustrated. If you die, it’s your own fault and dying in itself feels like progression due to the randomly generating worlds, which means Level 1-1, 2-3, or whatever stage you may be on will be completely different each time you play. I was stuck in the first mine world for ages it felt like, but this title’s difficulty compliments the other mechanics so well that the player never feels stuck. There is no trial and error and everything is a surprise, which in my book makes Spelunky refreshing until the end and beyond. 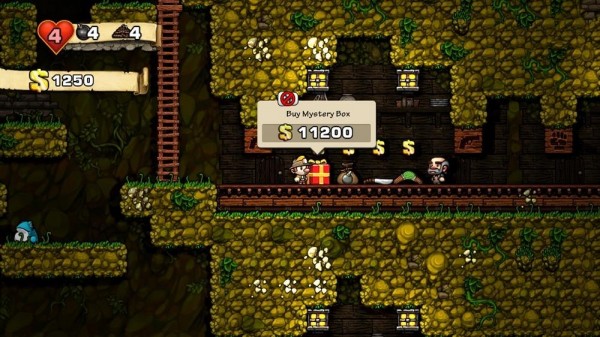 You really can’t even begin to explain this title’s charm without mentioning the witty AI and little secrets that can be found buried in every nook and cranny of this lovely little world. For instance, there is a shopkeeper that has a good memory. Anger him in any way (such as stealing or popping him with your whip) and he will instantly go insane with rage, shooting everything in his path with a shotgun. If you manage to survive, be ready for this lunatic to stalk you, as I found him pacing at the exit, ready to put my little character in a grave. There are a lot of little moments like this in Spelunky, which makes actually progressing so damn rewarding. Each stage also offers more incentive for completionists, such as a princess to save on each stage as well as tikis that add a good amount of loot for picking up but come with a great risk (by risk I mean giant boulder). All these little quirks seem to play homage to the classics, while providing the player with plenty of fun memories from their own playthrough at the same time. 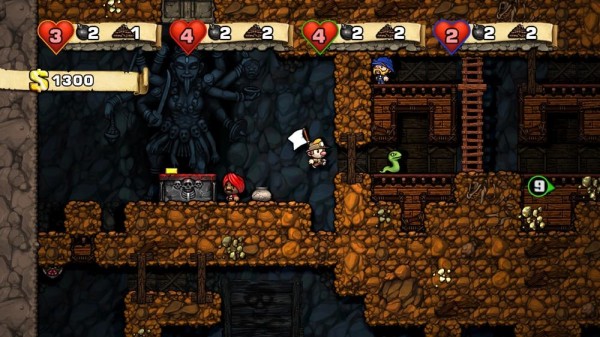 Multiplayer
Another fine feature of Spelunky is multiplayer – and it’s not even online. In the co-op mode, up to four players can play at once, which leads to 4 times the chaos. Teamwork is needed at all times due to the fixed camera, and if a player dies, their ghost arises is able to blow on enemies and items, offering either a slight help or major nuisance to the surviving players. A Deathmatch mode can also be played from the start, and is pretty much awesome as you would expect. All characters can go head to head, utilizing the many weapons against eachother until a victor is named. Some may argue that local multiplayer is a bit of an odd choice, but I welcome this for the platform as couch co-op is just more satisfying for a game like Spelunky anyway.

Visuals and Audio
When it comes to the art style within Spelunky, expect to be taken back to the days of the SNES, but with more crisp artwork and heavily detailed environments. Yes, this game looks fantastic and is coated with a nice retro aesthetic, which is sure to please all audiences. The main characters are full of charm, right down to their round, pink noses all animate wonderfully while the chaos takes place in the main game. Little touches also do a lot for the visual appearance of Spelunkey, such as the blood that bursts out of foes and watching a pal slowly impale themselves in spikes. 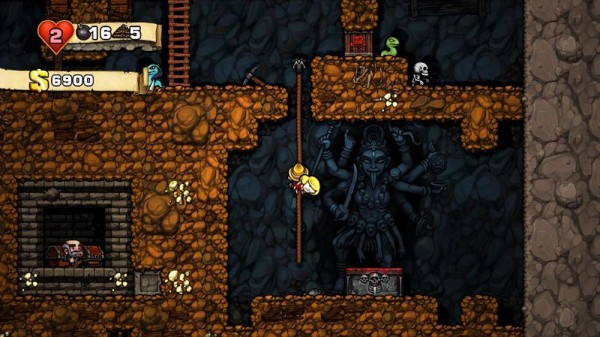 The audio is also well done, and the top notch soundtrack is sure to please anyone who is a fan of when video game music was less about dubstep and more about beautiful chiptunes that bring out an atmosphere in the world you are exploring. These characters never talk, but the sound effects that are blaring around you give you an easy indication of where you are, and what you need to do next. Imagine hearing a princess in distress, but you also hear an angry shopkeeper shooting his gun down below you. It’s effects like that that work well in building Spelunky’s stages, and make diving down further even more exciting.

Overall
Spelunky is the first game in a long time that has reminded me of why I love surprises. Each stage is different due to the randomly generating stages, and even without much a story, the game’s characters are able to carry themselves in such a clever fashion that it really doesn’t matter. As I mentioned, I am not a fan of games that are hell-bent on punishing a player, but this is a good kind of punishment. The more you die, the more you get out of the game, and that concept alone is what makes the replay value of Spelunky endless, and also what makes it one of the Xbox Live Arcade’s finest releases to date. If you want a good arcade title that is well worth the investment for both solo and multiplayer purposes, do not pass up this charming and utterly addictive adventure.