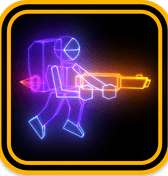 Space Junk is a game which is a one-hundred percent throwback to the arcade games of old. It was imagined and created by Upise Down Game’s two-person team: Greg Michael, lead programmer on Alien Trilogy and Forsaken back on the original Playstation, and Ned Langman, artist for Silkworm and Rodlan on the Amiga. The game’s visual style and game design is clearly meant to evoke a newer, more modern version of Asteroids. The question is, does the game succeed? 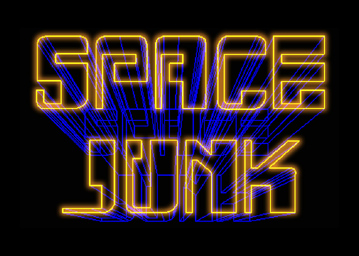 The game plays simply and intuitively. Essentially, you are placed into the floaty suit of a glorified space-janitor. There’s a lot of junk floating around up there, and someone needs to fly through the darkness, blasting it away. You push one button to jet-pack your way around as you attempt to avoid the junk and use the other to shoot at big bits of debris into progressively smaller bits of debris until there’s nothing left on the stage to blow up.

The premise sounds simple, and beyond power-ups and the occasional UFO attempting to blast you into oblivion, there isn’t really much depth in the game’s systems. It does however provide 25 levels, each progressively more difficult as the debris becomes faster, smaller, and harder to destroy. Between these levels are 3 “bonus”levels in which you try and accrue points by dodging asteroids for 25 seconds without use of your blaster, or shooting incoming missiles as you float without a jet-pack in the middle of the screen. You shouldn’t just go blasting bullets pell-mell either, as your score is rewarded for accuracy rather than stage completion. 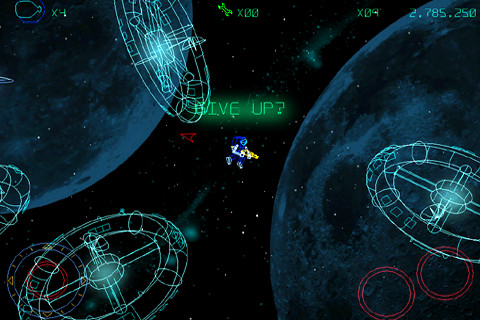 And now we reach the game’s main issue. It is all about your high score. Emphasis on the your.

Space Junk does not connect to the Apple Games Center, so you’ll never find yourself comparing your high scores to anyone else’s. You merely play the game to beat your own past high-scores.

And, much like classic arcade games, if you die, that’s it. There’s no option to start back at a level you’ve already completed, you start all the way back at level one, monotonously blasting through the simple first ten levels of the game over and over again.

If a game’s only incentive for playing levels repeatedly is self-competition, then there needs to be a serious check of the lead designer’s priorities. Gaming in an arcade was brutally difficult, but you were able to compare your scores with your friends and the local gaming community. Here it’s just you… the lonely journey of a debris blasting space-janitor. 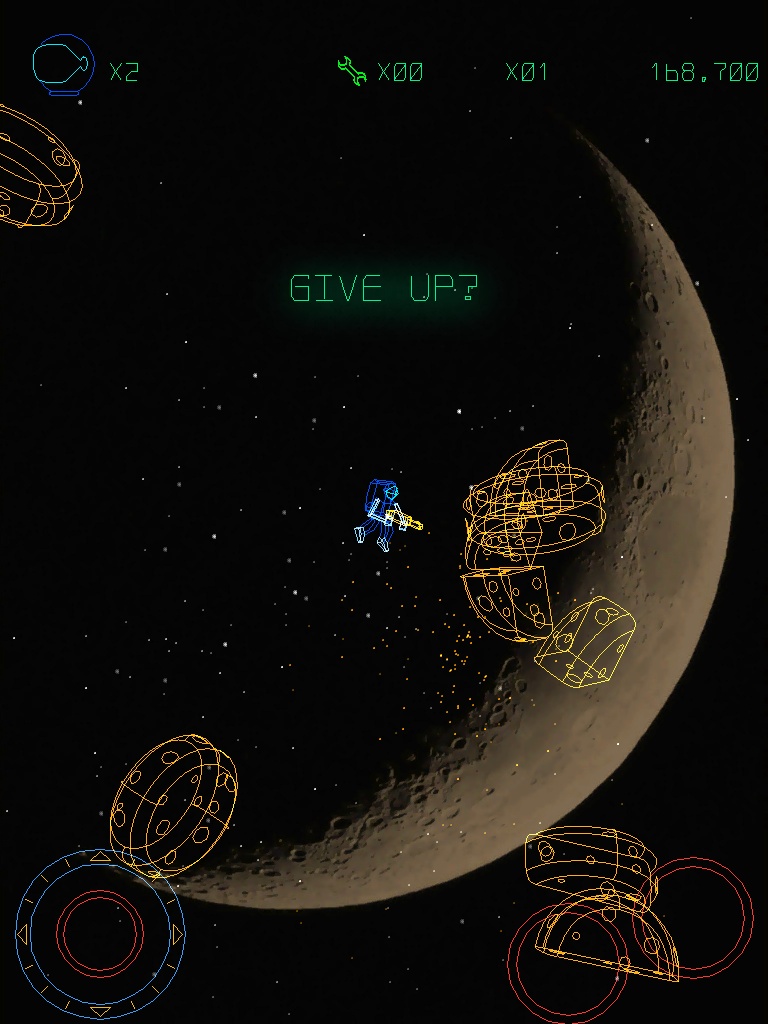 The game truly shines when it comes to visual design, however. The neon, vector designed look of everything from your spaceman to the attacking UFOs feels like something out of an 80’s sci-fi flick, very reminiscent of Tron. The backgrounds are gloriously detailed and change from level to level as your space-janitor floats deeper and deeper into space. And the entire design of stages and debris is full of referential nerdy in-jokes.

One stage has you blasting away at Sputnik and Laika, the first dog in space, while another involves blowing up replicas of the 2001: A Space Odyssey space station (sadly, no HAL). Perhaps my favorite was the “Murdoch Belt” stage, where I knew every satellite I destroyed meant one less television with access to Fox News.

The game also allows you to play it anyway you want, whether landscape or portrait. You can even flip your phone upside-down and it works that way.

There was the occasional frame-rate stutter when things started colliding all over the screen, but it didn’t happen terribly often, nor did it really impact the gameplay.

All in all, the game’s visuals truly shine, giving off the retro-arcade vibe, while still feeling modern and fresh. 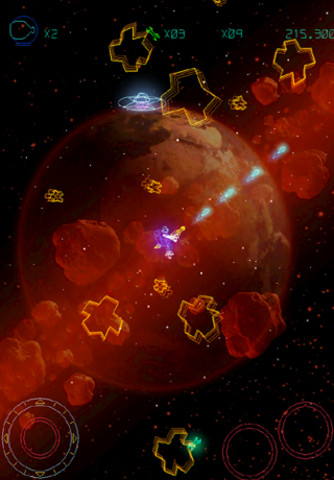 The sounds of debris being blasted to bits and the thrust of a jet-pack are wonderfully captured, presentation once again being where this game truly stands out, and the main menu synth theme helps evoke the cheesy 80’s sci-fi feel the game is going for.

The only issue audio wise is that once you are actually playing the game, the background music is limited to simple beeps and boops; not the most riveting or exciting soundtrack to go with the quest of a lone space-janitor.

There are two ways this game could turn out for its players: Those who loved arcade games and the “old-school” should go out and get this immediately (after all it is just 99 cents). To those who, like me, never were into that stuff, I can only say, approach the game with caution. While Space Junk’s presentation is outstanding, it’s entire premise is reliant upon you caring about and wanting to beat your previous high-scores. I don’t, and therefore much of the game is lost on me.