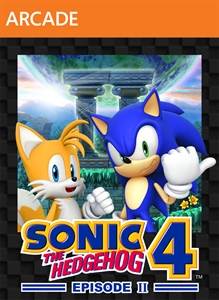 Making Sonic the Hedgehog 4 an episodic game was a pretty peculiar move, and when the first episode was released back in 2010 it received a fairly mixed reaction from both fans and critics. The game was far from being a disaster as it was actually a step in the right direction, bringing the franchise back to its glory Mega Drive/Genesis days. However, it was far from being ideal as the game had its issues in terms of the level design, core mechanics, and visual/art style. Episode I was a fairly good game for what it was, it wasn’t broken, but its shortcomings prevented it from reaching the unanimous acclaim and greatness that its Mega Drive/Genesis predecessors so deservingly enjoyed.

After a major hiatus, Sonic the Hedgehog 4 is back again with its second episode. The nearly two year gap actually proved to be worthwhile as it gave developers enough time to really build a better game. 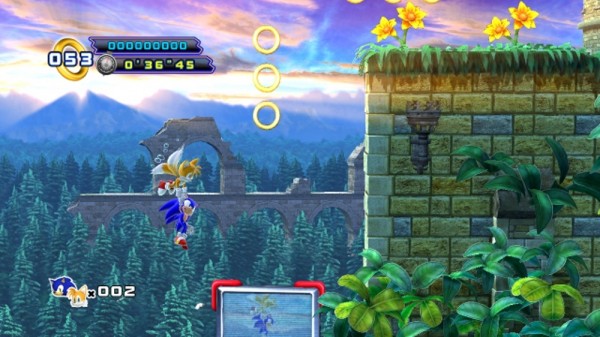 Sonic the Hedgehog 4 Episode II picks up where the first episode left off, but the main plot actually ties in with a cult classic title, Sonic the Hedgehog CD, which was originally released for the Sega CD/Mega CD back in 1993 and then later ported to numerous platforms last year. In fact, Sega’s decision to release a Sonic CD port for numerous digital platforms was largely because of the fact that Sonic 4 Episode II was going to be somewhat of a sequel to it.

Sonic CD introduced a new foe by the name of Metal Sonic, a creation of the series’ antagonist, Doctor Eggman. Years after facing defeat at the hands of Sonic in Sonic CD, Metal Sonic has been revived once more by Dr. Eggman, and now they work together to once again engage in all things evil. Sonic once again steps up to the task of putting a stop to their evil scheme, but this time he is joined by his longtime friend, Tails. 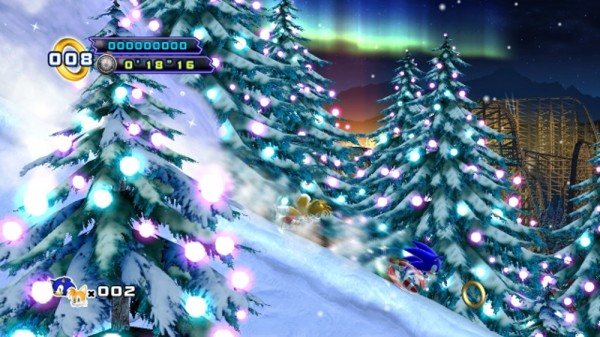 If there was one thing about Sonic 4 Episode I that immediately annoyed fans of the series, it was the game’s visuals as it resembled a really ugly PopCap video game, and the art style lacked the same charm and character that made Sonic games so cool in the past. Fortunately, Sonic 4 Episode II features a very significant improvement in the visuals department, as this is one fine looking game.

Visually, Sonic 4 Episode II has about the same quality as Sonic Colors and the excellent Sonic Generations. The game features some nice and crisp 3D graphics with a lot of detail, plenty of eye watering effects, and good use of dynamic lighting. Everything is pretty much built with polygons, giving it a very nice 2.5D look akin to the Classic Sonic sections of Sonic Generations. The backgrounds and stage visuals in particular look really impressive, as they have a ton of colour, variety, and detailed artistic touches. The 3D character models look really nice and animate well, a huge improvement over the dull and lifeless character models in Episode I. The art direction is pretty solid too as it adds a lot of personality to the various levels in the game, and the boss designs are actually refreshing and memorable this time around.

Musically Sonic 4 Episode II, like the first episode, tries to recreate the chip-tune music of the Genesis/Mega Drive Sonic games, and it does a fairly decent job. The soundtrack is a definite improvement over the first episode, with many tracks being quite catchy and memorable, and having just about the same charm as the chip-tune tracks of the 16-bit Sonic games. In fact, traces of classic Sonic tunes can clearly be heard in the soundtrack of Sonic 4 Episode II. Unfortunately, some of the more annoying and grating tracks from the first episode can still be heard in Episode II, in particular the infuriating boss theme. 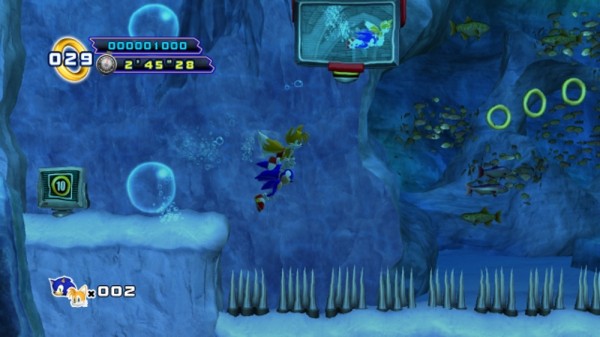 Sonic 4 Episode I was a fun game but it was mechanically flawed, and with a fast paced twitch heavy game like Sonic, every minor intricate detail matters. Sonic 4 Episode II is a significant improvement as the game mechanically feels a lot more refined and spot on, but that said it still is very much like the first episode. Sonic still feels rather heavy and a bit sluggish as you can sense a lot of weight when he runs and jumps, but the momentum issues from the previous game has been addressed to a large degree, making this a relatively more faster paced and precise experience. The homing attack is also back again but like the first episode there are still some instances where it is a bit of a hit/miss affair, and while these instances are minor, they still cause a fair bit of frustration during the more intense and twitch-heavy moments of the game.

Sonic 4 Episode II blows the first episode completely out of the water in terms of level design. Gone are the out of place gimmicks and awful design choices that plagued the first episode (torch puzzle…enough said), as this game features some truly entertaining and rich level designs that will make you want to keep coming back for more. The levels are big with plenty of routes, and they feature that ideal mix of platforming and high speed loop tearing action that defined the 16-bit Sonic games. You can clearly see that the developers adopted the same design philosophy that was showcased in Sonic Generations, as the levels are very fairly complex and challenging, but never in a cheap or unfair way. Levels still have gimmicks but they integrate nicely enough, such as sandstorms, oil spills, and even underwater sections. Also worth noting is that the levels in Episode II are inspired by classic Sonic levels, but in a good way as they still are quite refreshing and unique.

Tails the two tailed fox returns as Sonic’s sidekick, constantly following and mimicking Sonic and giving him a helping hand. The co-op aspect is very much similar to how it was in Sonic the Hedgehog 3 (1994), but this time they’ve added some special tag-team techniques to add a little twist to the level design and platforming. The sections that require the use of tag-team maneuverers are pretty intuitive and blend seamlessly with the core Sonic gameplay. Now the good thing about the game design is that it doesn’t overdo the whole co-op aspect, the moments where you have to work with Tails are intuitively placed and not too frequent, so the game is pretty much a traditional Sonic game where you mainly take control of Sonic. What’s also cool is that you can enjoy two player co-op via local and online multiplayer. 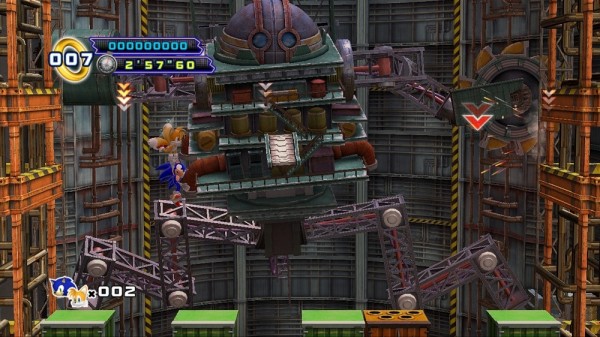 As with any Sonic title, Chaos Emeralds are present and all seven need to be collected in the special stages to unlock Super Sonic. The special stages of Sonic 4 Episode II are directly based on the ones in Sonic the Hedgehog 2 (1992), with some added bells and whistles, and the obvious modern graphical touches. These stages require you to run on-rails through a pipe, collecting a set number of rings before passing through a checkpoint, but along the way are plenty of traps and obstackles that you need to quickly avoid. The stages are as hectic and fun as they were in Sonic 2.

The boss battles in this game are really awesome, which is suprising considering how absolutely awful and frustrating they were in Episode I (the final boss of that game is easily amongst the worst boss designs in recent memory).They’re massive, very challenging, and put up a much more satisfying fight than your standard Sonic boss battle. Metal Sonic offers not just one, but three thrilling and fast paced battles, and Eggman takes control of some truly monstrous mechanical behemoths. The boss designs and patterns are pretty clever and intuitive, forcing players to fight smart instead of strolling through as they would in traditional Sonic games.

Now in an attempt to add some validity and purpose to the episodic structure of Sonic the Hedgehog 4, the developers decided to take a page out of the legendary Sonic 3 & Knuckles and add a little ‘Lock-On’ gimmick. Back in the day, Sonic 3 had an expansion called Sonic & Knuckles, and the unique cartridge lock-on feature would allow you to play the complete game with some new bosses and levels. With Sonic 4, they try to imitate this idea, albeit quite poorly.

If you own both Episode I and Episode II on the same platform, then you will initiate a ‘Lock-On’ which will unlock a whole new episode titled ‘Episode Metal’. In this episode you take control of Metal Sonic and learn about his story after the events of Sonic CD. While this all sounds very exciting, it actually ends up being a throwaway extra. Metal Sonic has only 4 acts/levels, each taking place in a slightly redesigned version of the four main Zones in Sonic 4 Episode 1. Metal Sonic plays exactly like normal Sonic, and the levels aren’t really that interesting and they don’t even feature boss battles or special stages. The actual ‘story’ aspect is pretty much pointless and non-existent, as it doesn’t really tell you anything new. So basically, Episode Metal should not compel you to go out and purchase the inferior Sonic 4 Episode I. Sonic 4 Episode II has enough quality to keep players satisfied, and if you just happen to own Episode I, then Episode Metal will offer a short lived distraction that feels like an afterthought. 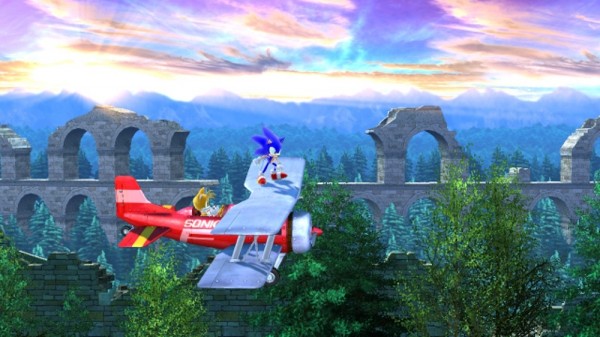 Sonic the Hedgehog 4 Episode II is a profound improvement over its predecessor, an ideal case where the developers take serious note of community feedback and criticisms in order to make a better game. The game improves upon the first Episode in just about every aspect, not just incorporating suggestions from fans, critics, and the general gaming community, but also adopting some of the best aspects of their recent successful Sonic titles.

The the core mechanics and physics still need a little bit of work, as there are moments where Sonic feels a tad bit heavy with the homing attack being a bit of a nuisance (I personally think it’s best suited for 3D Sonic games). Also, there needs to be a more compelling connection between each of the episodes, to give gamers a greater incentive to purchase them all. While it is a pretty cool idea to have that little ‘Lock-On’ gimmick between Episode I and Episode II in order to unlock ‘Episode Metal’, it unfortunately feels like a throwaway extra as the Metal Sonic quest is uninspiring and lacking.

Overall, Sonic the Hedgehog 4 Episode II is a step in the right direction and another solid entry to complement the fairly recent revival of the franchise. Episode III with Knuckles as a playable character? Yes please!