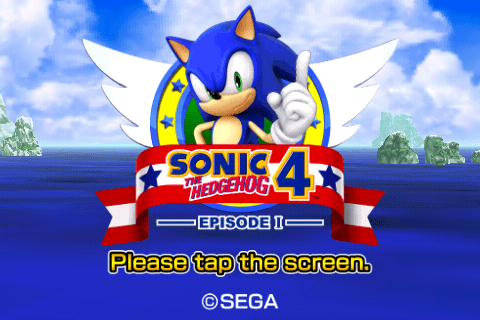 Overview:
We’ve seen many different SEGA ports to the iPhone. We’ve seen the old classic Sonics making their way to the handheld, but what about the brand new Sonic? Guess what, it is here and is it what fans have been waiting for? Sixteen years have passed but does Sonic survive his transition back to the 2D world after his long stint in the 3D world?

Graphics:
While the visuals on the consoles will always end up being superior to the iPhone, Sonic 4 is no slouch in the graphic department on the iPhone. The backgrounds to each level are well drawn and though stationary, are a nice backdrop to the running hedgehog as he runs through the new acts that come with Sonic 4.

The stages that Sonic traverses themselves are very sharp and though they are throwbacks to stages that have been in past Sonic games they have just enough of a unique touch to make them not feel recycled. Sonic on the other hand could look better graphically, as when he is standing still there is noticeable pixelation on the edges of the character, though how often does Sonic really stand still?

Controls:
As with any iPhone game, Sonic 4 has the standard touch screen controls, but it also comes with a tilting control scheme. The difference between the two is that with one, the player moves using a D-Pad and jumping with another button, while in Tilt the player tilts their iPhone one way or another to make Sonic move, and jumps with a tap anywhere on the screen. 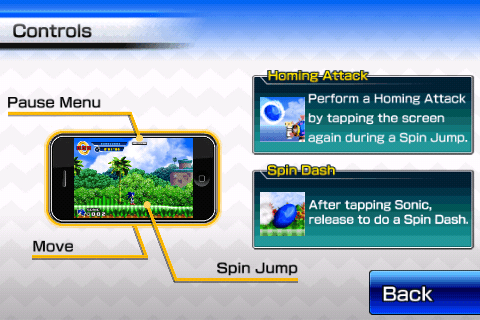 Unfortunately though the Tilt scheme is more interactive with Sonic 4, it also makes the game harder, this is because Sonic is already sometimes hard to control at top speed, and when you are forced to tilt your phone to move him around, there are times that platforming can be very difficult, and some stages require precise jumping or you will fall to your doom.

Using the Touch controls is much simpler and they are also very responsive which is a must when Sonic is running at top speed. There are a few times in the game that you will be forced to use the Tilt scheme but at least the one isn’t very difficult and actually benefits from this change. The special stages which are reminiscent from Sonic 1 are controlled entirely with spinning the iPhone around in order to control Sonic through the maze to reach the Chaos Emerald at the end.

Gameplay:
Sonic 4 almost feels at home on the smaller handheld that is the iPhone. Sure the console versions are on bigger screens but in the end nothing is lost in translation other than graphically wise.

Sonic fans will notice one of the biggest add-ons to the franchise right after they finish the first stage as Sonic 4 now has a world map where you can choose where you want to play at and whenever you want to. Once you finish Act 1 of Splash Hill you will then be able to select any stage that you choose to, and any Act that you choose to at any time. The boss battles are only unlocked after finishing all 3 acts however so don’t think that you can jump to a boss immediately. 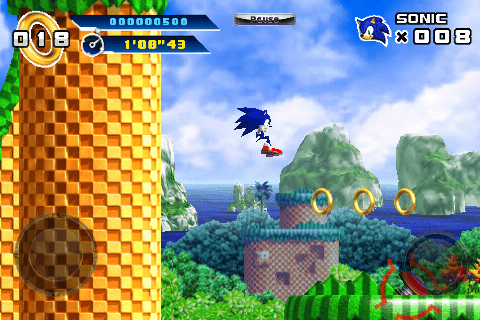 This add on is a major help to the game, as since the iPhone is a portable system, players aren’t always able to sit down and play through the Acts straight through without taking a break or something happening to interrupt gameplay. There is a small downside to this however as bonus stages are also available to be unlocked and played through multiple times, receiving a large amount of lives and chances at the Chaos Emeralds.

Another addition to the gameplay is that Sonic now has an air dash attack to lock onto enemies and kill them. This is a great addition to the franchise, though it has been taken from Sonic Adventure which was a 3D game. The iPhone benefits greatly from this add on by making it easier to kill enemies with the touch screen system and to reach areas they couldn’t before because Sonic can also use this to take a boost sideways in the air to reach a platform.

The game itself however is very short, with only four different stages and three Acts each it can be completed within an evening if played all at one time. Though there are a couple of modes of play, Score Attack and Time Attack it is still possible to finish the game quickly enough. There is the added bonus of gathering all of the Chaos Emeralds to unlock Super Sonic mode as well for the completionists in us all.
Then again Sonic 4 is also guilty of padding game time with slow moving parts inside the Sonic game. Yep, slow moving. There is a level within the game that requires players to gather a certain amount of points to advance further in the level, which isn’t difficult, but does upset the flow one would expect from Sonic.

While I’m speaking about flow, the physics have suffered a change as well, and for fans of the franchise it isn’t for the better. The physics now have Sonic stopping immediately once the directional pad has stopped being touched, which means that there is no longer that sense of momentum. He can zip through a giant loop that are trademarks of the franchise, but if the player isn’t pressing the D-Pad exiting the loop, he will stop completely even though he was at top speed a millisecond before. This does mean that Sonic is more controllable, but the way that the physics have changed just feels wrong. 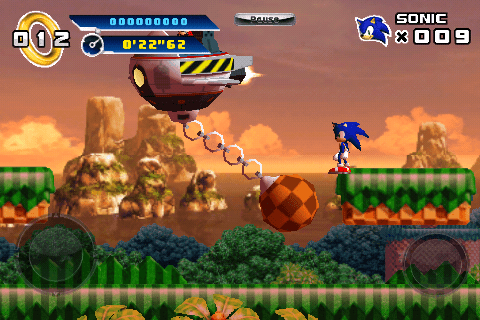 Overall:
Sonic 4: Episode 1 turns out to be a great addition to the franchise. There are plenty of nostalgia moments as various levels and bosses are taken directly from old 2D Sonic games and given a few new add ons to make them different. The physics have changed for the worse, though new players to the series won’t find this an issue. Sonic 4 turns out to be just what fans have been waiting for by bringing the good ol’ 2D Sonic we all fell in love with as children.