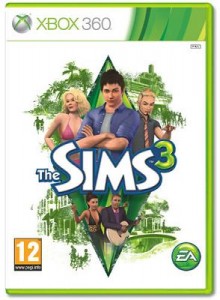 As far as console versions of ‘The Sims’ go, I think I’ve got some of the best credentials around. I’ve been with The Sims through it all; when they were “Bustin’ Out” in The Sims Bustin’ Out; when they made a move to the city in The Urbz: Sims in the City; even when they got their very first proper sequel in The Sims 2 during 2005. However, all these Sims games appeared on the last-gen line of consoles, so consequently, all were played be me on the original Xbox. The Sims 3 is, in fact, the first Sims game to arrive on the current line of consoles, meaning it will be the first time the series has been able to make use of the advanced next-gen graphics and supreme processing power. But the question is, with such solid foundations already laid down by its predecessors, what changes and new features can The Sims 3 bring to the table with the improved technology at their disposal?

The answer is, to put it bluntly, lots. The essence of Sims remains the same: a simulation of life with you tending to the needs of one or more Sims, commanding them as they go about their daily routine. You decide their job, who they socialise with, their love interests, their sleeping/eating/ hygiene patterns – all the directions they take in life. If all this was changed then it simply wouldn’t be Sims, that’s for sure, but the way in which the developers of The Sims can continually improve the experience and make it feel new without breaking the limits imposed by the standard formula is admirable. 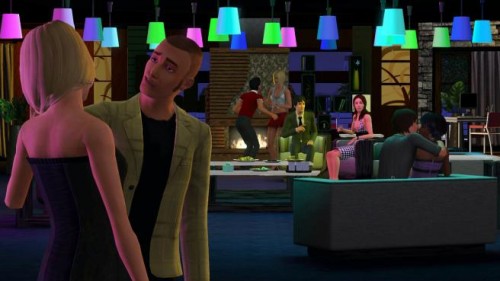 The improvement that hits you most on The Sims 3 is the supreme customisation options. As you are kitting out your character for the first time, editing his/her physical attributes, clothing and accessories, the greater choice of options quickly becomes apparent. You can finely tune the face and body to look as life-like or ridiculous as you like, with intricate scroll-bars to shape both the body and face, especially the latter with all manner of different types of noses and eyes to choose from, as well as options to sculpt angles and position on the face. On top of this, the graphical boost that comes with the use of the latest technology makes it the best-looking Sims game yet.

Also upping the level of customisation is the new ‘Create a Style’ feature. As well as crafting your Sim’s face and body carefully, you can select the specific colour scheme or design from a expansive list for your Sim’s clothing. The ‘Create a Style’ is implemented throughout the game though, and not just in Sim Creation mode, therefore furniture, carpets, walls and even outdoors can be almost infinitely styled to your tastes. Everything being customisable has the added bonus of being able to chop and change between the categories too. Categories range between headings like ‘Fabrics’, ‘Abstract’, ‘Carpeting & Rugs’ and ‘Tiles and Mosaic’, but they aren’t limited to specific items, meaning if you want trousers with a brick wall design or perhaps a t-shirt with a mosaic print, then it is all possible. Another building block on other Sims games is the new ability to place furniture at diagonals instead of purely at right-angles, a change that may seem trivial but in actual fact surprisingly big when you have to map out your in-game house. Providing this option for placing furniture means you can create a more natural layout for rooms – if you look in real-life homes, all objects in the home aren’t parallel or perpendicular to one another. 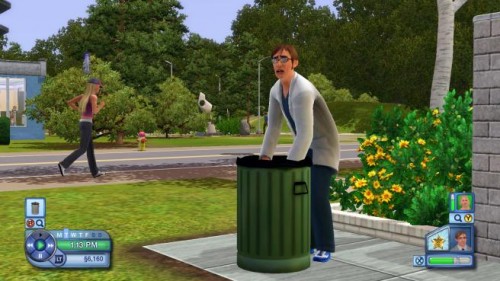 Other new features include the introduction of ‘Traits’, ‘Wishes’, ‘Happiness points’ and ‘Karma’. Firstly traits: all the other customisations are cosmetic but traits allow you to tamper with your Sims personality. Upon giving life to your Sim you are asked to select a group of 4/5 traits for your Sim. These traits may seem like a bit of a gimmick that don’t really do anything (as has been done in the past with some personality aspects to previous games), but they are shockingly broad with over 60 to take your pick from. They cover a wide range of real-life traits, from personal attributes like being brave to lifestyle choices (Party Animal) or even eating habits (Vegetarian). Picking some traits can render unavailable to avoid contradicting one another, such as you choose ‘Artist’ and then go on to select ‘Can’t Stand Art’. These then take effect instantly, opening up new social moves or opportunities with certain items.

As mentioned above, there’s also ‘Wishes’, ‘Happiness points’ and ‘Karma’. Both Wishes and Happiness points had been touched on in The Sims 2 through the Goals and Fears system, although the mechanic has only really been realised to its full potential now. You are given space for four wishes and one lifetime dream. The four wishes are usually small tasks and are constantly being updated depending on your Sim’s ever-changing outlook on their life. If they start getting close to another Sim then it could be a social aim related to that, or it could be to do with learning a new skill or getting further in a career. These wishes can be accepted or declined each time the game offers them to you, meaning you don’t necessarily have to take on a task that seems too difficult or takes you in a direction you don’t want to be headed. 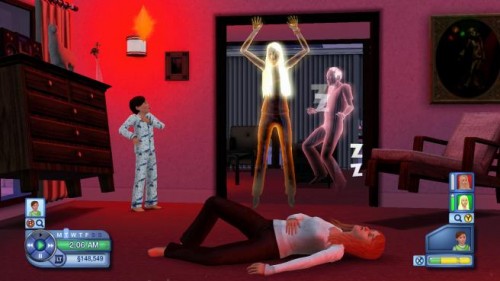 Lastly, there’s the introduction of Karma, and Karma points. There has always been a dark, sadistic side to The Sims, but this particular addition will please those who go a bit mad with their god-like power. Where before you had to use your imagination to kill, torture, or at the very least humiliate these virtual people (i.e. creating 4 walls and a door, getting your Sim to walk in, then removing the door), the Karma power allows you to cause natural disasters and extremely bad luck to see how the Sim will cope, provided you’ve accumulated enough points. Alternatively, if you don’t want to bring this upon your own creation, you can also spite someone else with these negative effects as well. Karma is distributed at the end of each day based on the events of the day, but it isn’t all for evil scheming. On top of the negative Karma purchases that can be made, you can buy constructive power-ups too, for instance, one that fills all your living meters for food, sleep and such up to full.

When you are first plunged into The Sims 3 and the location of Moonlight Bay, it can all seem a bit overwhelming. Some of this is of the good sort, such as the vast new customisation options, but on the other hand, some of it isn’t. The Sims 3 is the most open-ended and free Sims to date – unlike previous incarnations, you get to pick your first place of dwelling, with the only limit imposed being the amount of Simoleons you begin your journey with. However, I think the game suffers from the lack of structure slightly, as it has much less so than its predecessors. Where the other games had aims to complete in order to move on to a new zone, a much larger game-world is all opened up from the off and both the camera and the Sim are able to move through each and every part of it. This makes a huge change from being isolated to the confines of your house, with only the occasional visit elsewhere by car. In The Sims 3 you can go anywhere, and even follow your Sim to the building where they work, which sort of removes the element of mystery that came in the past with directing your Sim to their carpool lift and then not seeing them until their shift was over. As well as being given to much freedom, another of the game’s shortcomings is the removal of multiplayer. I have no idea what prompted them to remove local multiplayer as it has featured in other console Sims games, but not having an extra player available to partner up with detracts from the experience. Previous games were always more fun with someone progressing alongside you, and I imagine that had The Sims 3 been treated to the same luxury of multiplayer, then the same would be true here. Sadly multiplayer has been removed, meaning you are left with the dilemma of having to juggle multiple Sims by yourself if you want an in-game family. 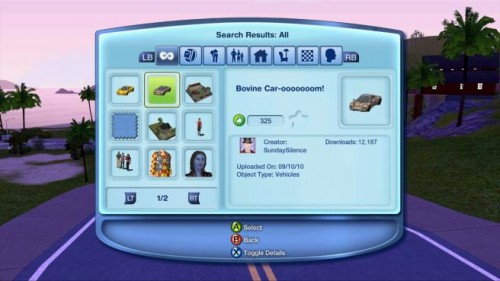 The Sims 3 builds on its predecessors greatly, and with 5 years since the last Sims console game, it’s no surprise. The game has clearly had a lot of work put into it over its time in development with an unprecedented level of variation and customisation present in the final product. As the first Sims to appear on this next-gen line of consoles, it does the new equipment justice with improved visuals and a much larger play space. However, the new freedom that comes with this substantially larger game-world has some side effects, namely a feeling of “Where do I begin?”. Where the prequel and all the games before that were happy to confine you to a small house, getting you to explore the region slowly as you worked your way up the property ladder, The Sims 3 is the most ambitious Sims to date, allowing you to roam the region as you wish. However, you soon come to adapt to your new-found liberty, so it isn’t as detrimental as it first may appear. Unfortunately, something that can’t be overlooked is the removal of multiplayer and as someone who played through most past games in the series with a partner in tow, it is saddening that two-player couldn’t find its way into the title. With all this said though, it is still the high quality game you would expect to see from such a well-recognised brand like The Sims, with enough new features to keep you satisfied. If you like The Sims style of gaming and you haven’t picked this up already, then it’s worth the purchase. As with others, it’s addictively and should hold your interest at least until your Sim runs through the cycle of life and passes away.