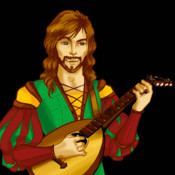 It’s not everyday that a hardcore game comes out for iOS devices. When I say hardcore, I mean not only a game that doesn’t involve cartoon farm animals, but those far-too-easy so-called “hardcore” games like Infinity Blade. You see those types of games aren’t as rough and full of adventure as older RPGs like the original The Bard’s Tale.

Or at least, that’s what the one-man development team behind Silversword thought. He sets out to capture the old, die-rolling RPG adventures of the 1980’s and in that light, the game is a massive success. But there’s a reason games like those were abandoned two decades ago, and those become all too apparent in this iOS attempt at recapturing a lost era of RPGs. 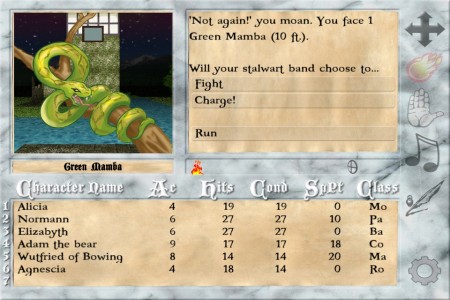 The game begins with very little in the way of context: You are in a camp, in a party of rogues, wizards, and warriors, and you must travel south to aid a besieged city.

In the camp, you start with some randomly generated party members, but can create quite a few more, though you can only haul around seven of them with you as you explore the world. There’s quite the amount of classes and races to choose from, each with its own party-related benefits and unique stats. These party members have no characterization however, and why they are all fighting together is beyond explanation. They are there to serve the gameplay, nothing more. They’ll level up, carry gear, and help you to bags of loot, but don’t expect them to make you care… or even talk to you.

Based on how much experience you have with games based entirely on random number generators and statistics, this process can be a quick breeze, or it can take hours. I created a Paladin, named him Foromir and left the camp after a bit of a simple tutorial.

Oh, but he wasn’t in the party. I hadn’t realized that after creation you had to battle through the clunky user-interface to add him to the party. So I had to trek back to the campfire in the northern corner of the castle to go ahead and add him.

Here we come to one of the major problems of Silversword: despite coming with a 40-page instruction manual, it never fails to explain to you the most basic of concepts (such as movement or combat), but instructions on how to cycle through character inventory, move the order of a character in the party, and a plethora of other important gameplay nuances always seem to lie forgotten somewhere in the ether.

I’d read that in the older RPG’s, local area maps didn’t exist and that players had to map out with pen and paper the in-game layouts. Thankfully, that’s one tradition that Silversword does do away with, and there’s a very handy map on which points-of-interest, walls, doors, and the like are all simply presented. And that’s endlessly useful, as the road south is littered with dungeons to explore and monsters to fight. 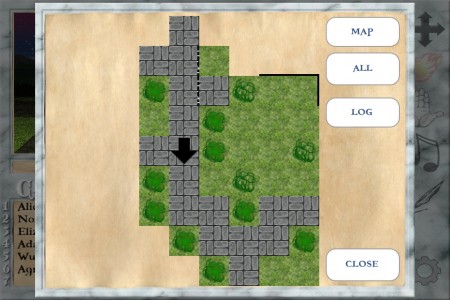 The feeling of possibilites as you step out of the starting area is akin to that which you’d experience when playing Skyrim. The only problem is, you can’t see what challenges lie ahead as enemies appear out of the blue to attack. There’s no tall grass here, any square has the potential of housing an unseen foe. Further, enemy appearances are randomly generated, which means you can have cleared the top level of a dungeon, decide to turn back, and have to fight through the whole thing over again. Only this time your party will be weaker, as they’ve all taken damage and your mages will be running out of energy.

How old school and hardcore.

More old school features: Non-regenerative health (mages or shrines have to heal you up), no auto-save, magic only regenerates during the day, traps are invisible unless you have a special detector in the party and they respawn (that way you get to worry about them several times instead of once), traps actually do significant amounts of damage, combat is left entirely up to the rolls of invisible die, a user-interface whose buttons are either massive or too small for the small iPhone screen, puzzles whose clues pretty much require you to look up the answers on the game’s official website, a number of questionable decisions regarding how the user interface works (such as the constant reshuffling of the party when a member is killed and then revived), to see in the dark a spell has to be cast by a mage, and, despite the game’s emphasis on regularly saving, there’s no quick-save button (every time you have to go into the settings, save the game, and then confirm you want to overwrite the past save file). I’m all for pausing the game and planning your next move, but there’s far too much time spent in the interface and not enough actually enjoying exploration and dungeon-running in the game.

I hated these design decisions, but I was born on this side of 1990’s and my first RPG was Pokémon Yellow. There’s no nostalgia to pull me back into an almost forgotten age in video games.

The game does deserve credit for that sense of exploration it breeds. You’ll alway wonder what’s around the next corner, and if you’re the kind of person who thought Dragon Age: Origins wasn’t hardcore or old-school enough, this will definitely appeal to your sensibilities. 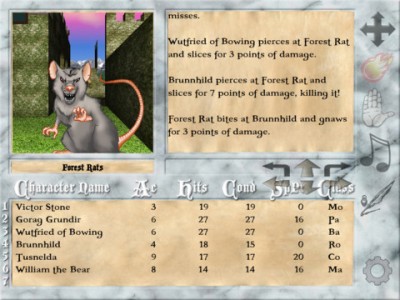 The iDevice screen is two-thirds interface, and one-third game world. While this emulates the original Bard’s Tale to a tee, it’s not really appealing to look at. Does the list of people in my party and each of their stats really need to take the entire bottom half of the screen when I’m out and exploring? The world itself is graphically rendered for first-person exploration and though it doesn’t look spectacular and the draw distance is atrocious, it’s serviceable enough at presenting a world ripe for a good looting.

There’s not much sound design to speak of. Birds chirp as you explore the world, dice roll when combat takes place, and a merry tune plays upon winning a battle. 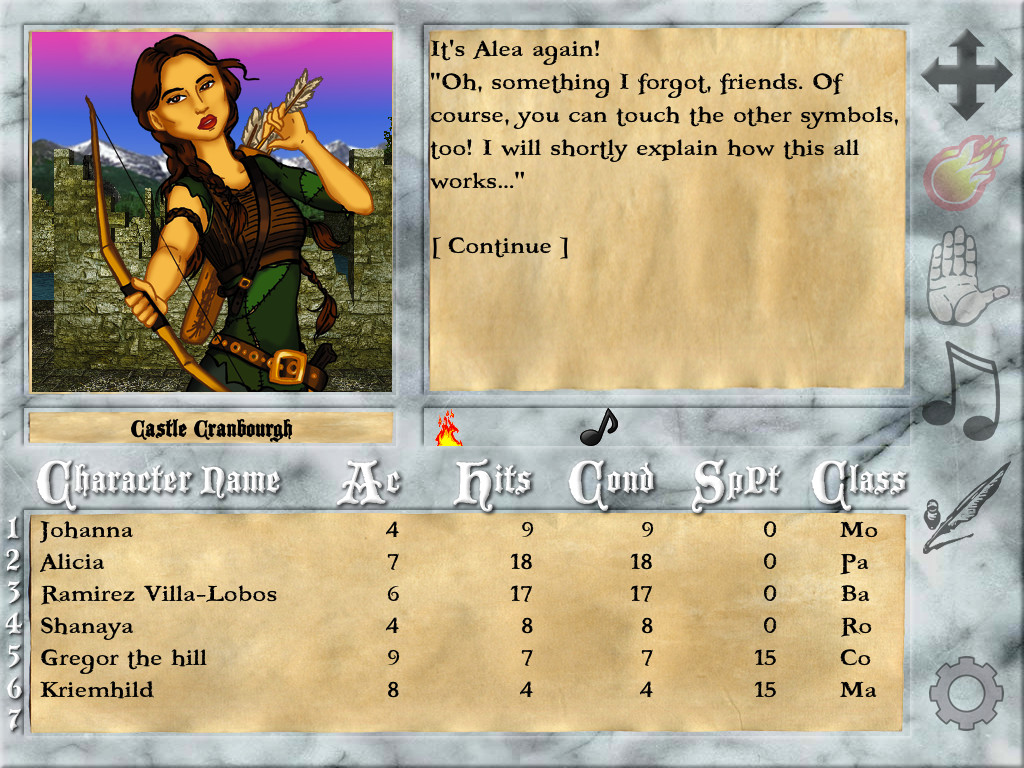 Silversword is the kind of game I wish I could give two scores to, because I understand that it is attempting to recreate what some people consider as the golden-age of RPGs in the 1980’s.

It does. If you loved that type of game and you’d like to have a portable version to carry around, I strongly recommend you buy this game. It will provide you with hours upon hours of gameplay that accurately recaptures an otherwise lost era (and you can always try it out beforehand with the Lite Version).

If, however, you, like me, never experienced or loved 80s role-playing games this app will give you the occasional moment of, “I can’t wait to find every corner of this dungeon,” but most of the time, you’ll be juggling with the interface, getting exasperated at the backtracking which involves fighting enemies you’ve killed two minutes ago, or realizing your last save was an hour ago and “oh boy, there goes the last guy in my party.”

The fact of the matter is that this game is based on the design philosophy of the 1980’s. That’s 20 to 30 years of advancements and streamlining that it generally ignores. The game can be generally boiled down to mild exploration and heavy menu-surfing; the visual payoff is never enough and the interface isn’t even a simple one to navigate.

If inducing nostalgia is this frustrating for everyone not in on it, then perhaps it’s time to leave the past where it belongs.