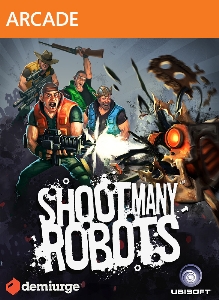 Shoot Many Robots is a 2D action shooter title developed by the same studio that has quite the impressive resume in working with other major developers, helping develop several high profile titles such as Mass Effect, Bioshock, and several Rock Band games. Shoot Many Robots is the latest from the company, and unlike their previous projects which were mostly done in collaboration with other developers, this shiny new shooter is their independent project. The game is a digital download purchase on Xbox Live Arcade and PlayStation Network, with a PC release on the Steam platform to follow after. 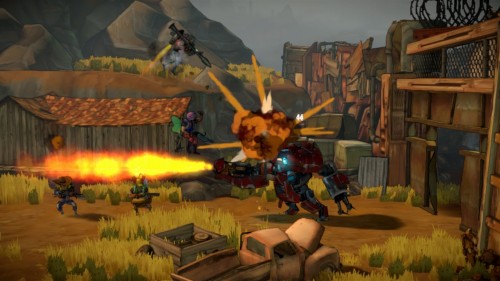 Shoot Many Robots has a very cool and laid back art direction. It has this goofy western cartoon look to it with some offbeat character designs and such. The general demeanor and style of the game is just very American, with a strong and stereotypical American country life vibe. The characters are hillbilly and redneck types, with a fun and laid back attitude. Graphically it’s a decent looking game with a very gritty look and good use of rusty colour tones in the environments, which include locations like scrap yards, forests, and factories. The 3D graphics are decent enough and have an interesting stylisation.

Shoot Many Robots has a very groovy and lazy southern American rock soundtrack, the tracks in the game are scattered with some rather chill and slow guitar tunes that don’t necessarily provide an adrenaline rush, but still compliment the rather rusty and robotic wasteland look of the game’s levels. The simplistic guitar tunes do pick up in speed and aggression during the more intense sections of the game.

Aesthetically and aurally, it’s a rather cool looking game even if it isn’t anything mind blowing. However, it’s still a bit refreshing game because most games in this genre have mostly been developed by Japanese game studios and as such have that strong Japanese and anime vibe to their sound and visuals, so it’s pretty cool to see a very American comic book style aesthetic and hearing a southern rock style of music. 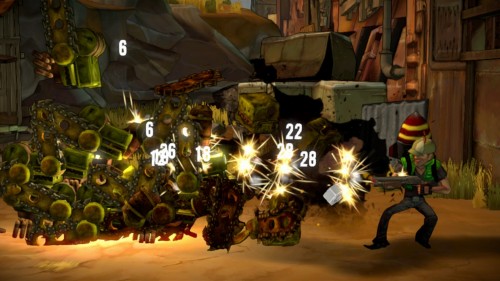 In Shoot Many Robots, as the name suggests, is about a small band of humans battling an army of robots (or as the game likes call it, ‘murdering’ robots). There are three main maps each consisting a set of worlds and levels. Each of the maps offers a different level of difficulty, being Normal, Hard, and Insane. You’re forced to start from Normal, and unlock new levels by earning stars in each level.

Levels generally come in two types, survival levels and standard action levels. In the survival levels you have to survive an onslaught of robots, and after surviving the primarily wave, you then get a chance to take on some bonus waves which you don’t have to survive but doing so will increase your score and such. The standard action levels involve you to progress levels in a typical 2D shooter platformer fashion, taking on hoards of enemy robots and working your way through some obstacles, traps, and typical platforming situations. The levels are fun, nothing too intuitive or crazy in terms of design and such, but they offer a nicely paced action and enough enemy and design variety to keep you entertained, as well as some conveniently placed checkpoints.

There are boss battles too, and while they’re not nearly as crazy as the brutal behemoths that can be found in Hard Corps Uprising, they are actually a lot of fun in terms of their design and pattern. The enemy variety is decent but the bosses are actually really good and represent some of the best moments of the game. 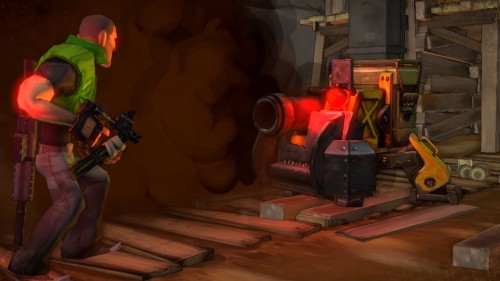 Mechanically the game is sound, as your character comes with all the essential skills such as double jump, dash, melee strikes, and others you can unlock. One of the coolest things you can do in the game is literally punch these red bullets right back at the enemy. You can carry up to two weapons, a primary weapon that carries unlimited ammunition a much powerful secondary weapon that carries limited ammunition but carry quite the big punch. The controls work well and it plays really well overall.

The best part of Shoot Many Robots is that you get to pretty much build your character and customise him with in variety of ways. While the main focus is obviously to rack up a high score for some bragging rights, you also need to try collect as many nuts and bolts from fallen robots. These robot parts serve as the game’s currency, with which you can purchase all sorts of new weapons such as flame throwers, grenade launchers, machine guns, shotguns, and numerous others. You can also purchase some really useful attire upgrades which include hats, shirts, and pants, with each offering some stat improvements and in some cases even new abilities such as a power slam. You can’t just purchase what you please, as you need to discover some of these weapons within the game’s stages, and also level up your character in order to be able to purchase them. Leveling up also helps to improve your health and offensive strength.

The deep customisation alone is what makes Shoot Many Robots such an accessible experience compared to most games in the genre, and gives the game a very natural progression and also does wonders for its replay value. While the game obviously gets harder as you go along, you can still work to increase your character’s level and collect more nuts to purchase more weapons. It’s just a matter of making your character strong and figuring out the ideal combination of weapons that suits your play style or nature of the level. The challenge is therefore, usually under control and manageable because of this.

There is an online multiplayer component too, allowing up to four players to play co-op, but at the time of review I was unable to find any players to test this. 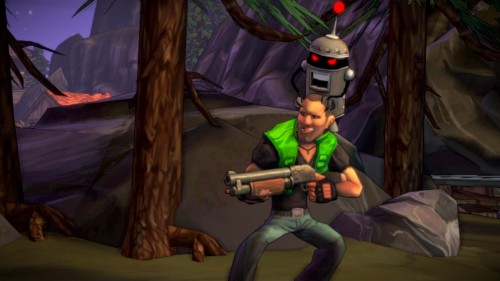 Shoot Many Robots is a really entertaining shooter adventure that adds quite the modern twist to the Contra style of gameplay that it draws upon. The actual game itself will offer you a ton of great action, fun bosses, and lots of levels with a natural progression in challenge. The best part is that you can level up your character and customise him with a ton of upgrades and weapons. It’s a great shooting experience, and for its price you will definitely get plenty of bangs for your buck.