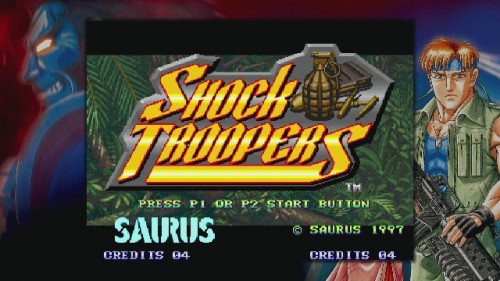 The Neo Geo was both an arcade board and a console released in 1990 in Japan, with a subsequence release in the United States. Although it was lost in the video game jungle, thanks to the rise of Nintendo and Sega, it still had its own library of games that were quite decent. A game that originated on the Neo Geo was Shock Trooper, a top down run and gun game where you have control of a squad of troops and try to defeat the evil organisation behind the fighting. It is now available as part of the Playstation’s Neo Geo Station emulation, alongside World Heroes. So, is the game worth replaying or worth playing for the first time? 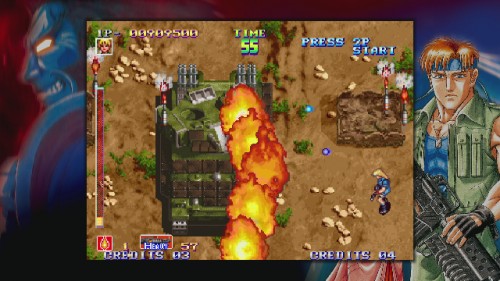 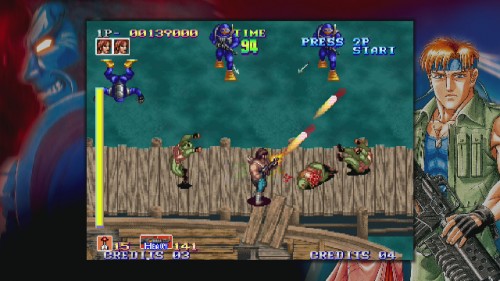 Gameplay
The game is your standard run and gun game from a top-down perspective. You control your character with the directional buttons and use the face buttons to shoot, dodge and swap out characters. Each character has a gun but will have either a single shot or double shot, which is unlimited. Each character also has a special attack, called a “bomb”. It is an explosive ranged weapon which deals heavy damage. Ammo is limited but you can find refills all over the stage. There are other weapons the troops can use, such as a Heavy machine gun and a flamethrower. Enemies include regular troops, ninjas, heavy troops and tanks.

There are two modes of gameplay: Lonely Wolf and Team Battle. Lonely Wolf means you can only choose one troop and go through the stages as that character. You are given 20 lots of special ammo but will lose the versatility that Team Battle offers. Team Battle allows you to form a squad of three. You can change the characters on the fly, useful if one character is greatly hurt. Instead of 20, you are given 10 lots of special ammo, however, you can take advantage of the variety that you are offered. I chose Team Battle often because of that variety I am offered as a player. For one, with Team Battle, you can have a high defence character taking down big hoards then switching to a high speed character for the smaller hoards.

This is quite basic gameplay, but it does keep you on your feet. The action is fast paced and you have to be alert in all directions. With that said, it can be very difficult, even on easy. Just like World Heroes, there are four difficulty levels: Easy, Normal, Hard and MVS (arcade difficulty, between Normal and Hard). Instead of balancing issues, the problem is too much stuff on the screen. There could be bullets everywhere, which can mean that you can dodge into a stray bullet, taking damage. Nonetheless, the gameplay is fun. 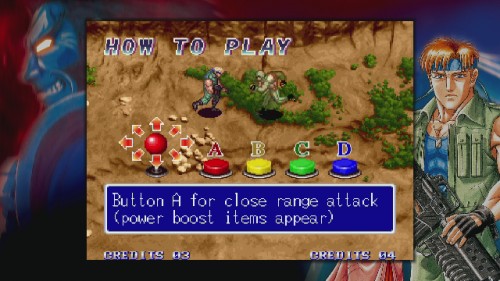 Visuals
Just like World Heroes, the sprites are wonderfully detailed and well designed. Each character flaunts their own look quite well. Even the muscles on the male characters are quite detailed. The environments are bright and colourful. They are also incredibly detailed. For example, the mountains in the mountain stage are well detailed, right down to the last boulder. However, I do have to raise something. I make reference to another Neo Geo game, World Heroes. That game was made in 1992. Shock Trooper was made in 1997, five years after World Heroes. Although I think the visuals are good to look at, they are outdated. I’ll give it the benefit of the doubt considering it was developed for a 16-bit console, but, considering it was re-released, maybe they could have added a touch or two before release. Still, they are good to look at. Animations are smooth, with each character having their own end stage victory animation, which actually looks good. 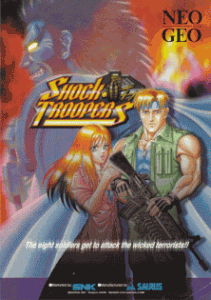 Music
The music is good to listen to, being in its 16-bit glory. Each peice of music fits the moment. For example, the mountain stage offers a great piece of music that gives the player a sense of danger. The music gets more intense as you progress through the game. The opening sounds great as well. There is a sound player outside of the game as part of the emulation, allowing you to listen to your favourite tunes from the game.

Overall
Shock Troopers is a good game to play on the go. The action keeps you on your toes and there are enough characters for some variation. The visuals are well detailed and the music reflects the situation quite well. However, with that said, the game looks outdated, you will see too many things flying around with all difficulty levels and. Despite these minor inconveniences, this is a game that, alongside World Heroes, will be a great companion on your Playstation Portable.