Eight years ago, when the Game Boy Color was on it’s last legs, Shantae was released. The title received rave reviews and garnered a huge cult following. Shantae fans wanted a sequel and developer WayForward Technologies have now finally released the heavily anticipated Shantae: Risky’s Revenge exclusively for the DSiWare download service. The big question is how well this title measures up to the original and if Shantae can stand her ground to the competitive platforming market. Here is my review.

Story
Shantae: Risky’s Revenge picks up right from the original, but now Risky Boots has returned to cause more chaos in Sequin Land. Shantae sets off on a quest to obtain the powerful magic seals before Risky can get her hands on them and use their power for evil. The story is simple and fun, but what makes the whole story come to life are the characters. If you never had the chance to play the original Shantae, she is a half-genie and a bit naive yet brave hero. From the belly dancing to quick one-liners, her character has not really changed at all since her first outing in the gaming world and that is one thing that all Shantae fans will be happy to know. 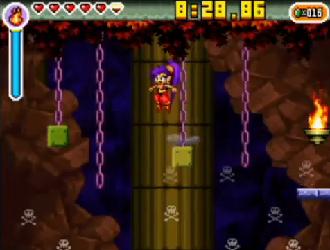 I mentioned the characters in Shantae:RR for good reasoning. Each NPC can interact with Shantae and give you information and clues about upcoming locations, items, and other in-game happenings. This is usually done with a bit of humor mixed in. Each character you talk with is different from the next and I felt a lot of work went in to this feature to add a whole new level of depth to the already booming locations in the game and can easily keep you interested the whole way through.

Gameplay
This is where Shantae shines. Keeping true to the original, the platforming and puzzle elements in Shantae all are back in full force and feel even better than before. There are many things to go over in the gameplay as there are many features that tie together to make one solid experience.

There are many different locations that you need to visit, from forests to underground dungeons and many other fully detailed environments. Standard jumping, running, and performing Shatae’s classic hair whip feel smooth and performing each action comes with no hiccups and feels very polished. The enemies also vary from many different creatures and increase in difficulty as you move throughout the game. Of course to help Shantae take down the many enemies along the way are powers and upgrades that can be obtained while progressing through different stages. The bottom screen on the DSi is used mainly for your map and inventory, keeping everything at easy access during levels. 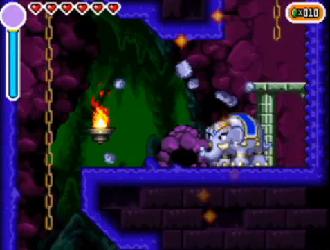 A currency system is in tact and Shantae can pick up gems by defeating an enemy and use them to buy new upgrades such as fireballs, health potions and many more other powers from the in-game marketplace. The upgrades don’t stop there as much like Metroid, power-ups can also be found in game. What makes Shantae different though is that that these are applied through the belly dancing feature. By simply holding the X button, Shantae freezes time and dances until you find the proper pose. Once the player releases the button, Shantae transforms into a creature to help her reach a certain point that was otherwise unobtainable. Each animal has it’s own strengths such as the monkey being able to jump to higher points and run a bit faster and the elephant able to smash through giant rocks to reveal new areas or treasures along the way.

Another reason I loved this game was that it was not linear. Due to the upgrade placement, there is a lot of backtracking to be done. Not like “Please let it be over” kind of backtracking, but a fresh new approach at levels already visited. With the animal powers being obtained later in the game I found myself going back many times with the ability to now move forward into dungeons and areas I could not otherwise earlier. The forest level and the town levels certainly deserve the biggest mention of the game as there is a fully animated background that Shantae can instantly jump into by finding a jump pad. You can also hop forward into the previous area as well so this works both ways. Not only is this done quickly, it is done extremely well. I would love to see this more if there is a sequel to this game as using this way to progress through levels in very innovative and made the title stand out from other games in the genre. 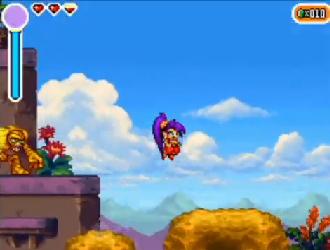 Graphics/Audio
The graphics in the game are the best in my opinion on the DSiWare. Each character is vibrant and in full color with a lot of charm, but the environments and locations is what completes the experience. Each environment is fully detailed with full color and beautiful textures that made the whole experience of discovering a new area that much more rewarding. Shantae’s animations are smooth and even the NPCs were great because each design fit their personality. As far as 2D games for portables go, this one proves it’s worth by being so polished and feeling like a final product which made it feel like the 8 year wait was well worth it.

The music stands up to the top notch graphics as well with a superb soundtrack that fits in perfectly with the flow of the game. Each location has it’s own 16-bit instrumental that hums nicely as you explore and is very memorable. The sound effects are on key as well from the whip of Shantae’s hair to the ever so sad moments when Shantae runs out of hearts and meets her end only to let out a loud scream.

Overview
Shantae: Risky’s Revenge not only did everything right for a DSiWare title, it is now also one of the main selling points for the DSiWare. Innovative platforming, an incredible soundtrack and a unique and quirky set of characters make Shantae: Risky’s Revenge a contender for one of the best releases this year and will go down as one of the best portable platformers of this generation much like the original Shantae accomplished 8 years ago. It is really easy to relive the game’s 6 hour adventure over and over with new unlockables and places to explore. It is also incredible that WayForward packed all of the content into a simple download and at just 1200 points, this is one of the best deals in gaming period.

I Give Shantae: Risky’s Revenge: