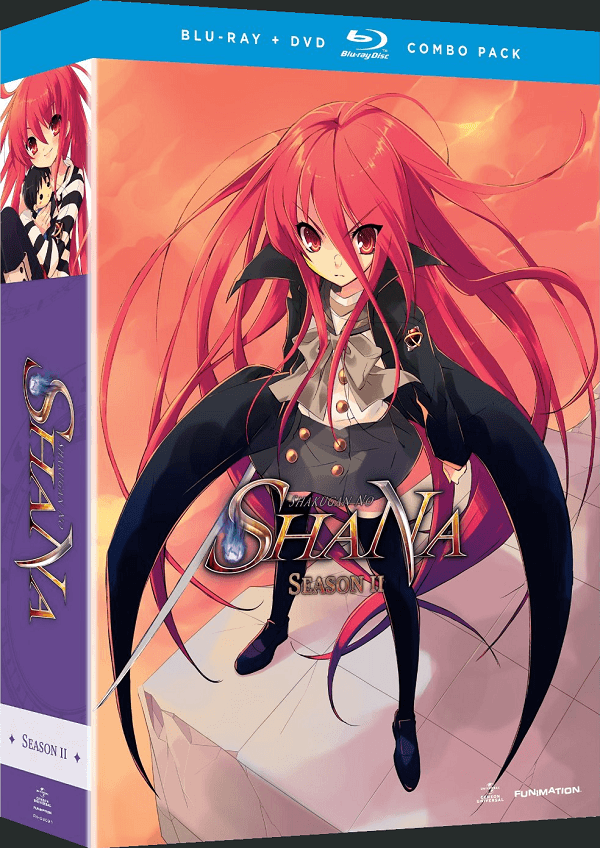 Overview:
Anytime something is delayed, people can be upset at first but they will usually always understand the reason why something was delayed. That being said, the second season of Shakugan no Shana suffered quite a number of setbacks since it originally aired five years ago in 2007. Thanks to the original license holder being shut down, the series was in limbo before being acquired by FUNimation.

However thanks to the shift in licensing the English release of anime was delayed indefinitely until just this month when the second season of Shakugan no Shana finally became available six years after season 1 (the review for Season 1 can be found here). With a whole new cast, can fans look forward to entering the world of Shakugan no Shana once more?

Story:
Shakugan no Shana Season 2 Part 1 picks up a few days or weeks after the events that occurred when Yuji was saved from the Bal Masque organization by Shana. We join Yuji on his way to school as if it was any normal day, however when he notices that cherry blossom petals are falling at an unusual time of the year and his friends seem to ignore certain questions of his, he begins to wonder if something is amiss. 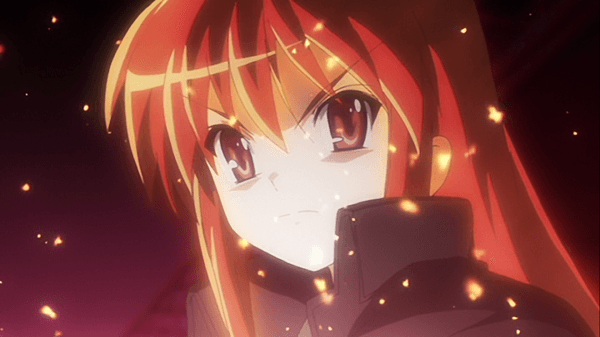 He doesn’t have to wonder for long however as old enemies begin to appear and he realizes that he has been trapped within a dream by an evil Denizen who is seeking the Midnight Lost Child. While he realizes this and does manage to overcome this Denizen with the help of Shana, a new mysterious fact is revealed about Yuji, that his Midnight Lost Child power is being protected from within him by something called a “Keeper.”

As Shana’s servant and assistant Wilhelmina searches for what this may mean for Yuji and Shana, the cast takes the rest of the first half of Shakugan no Shana Season 2 off. Well, not quite to be exact but unfortunately viewers may see this as such thanks to the fact that outside of a few plot points being revealed here and there and a minor confrontation, nearly all of the twelve episodes found within Part 1 of Season 2 are as poorly paced as can be. 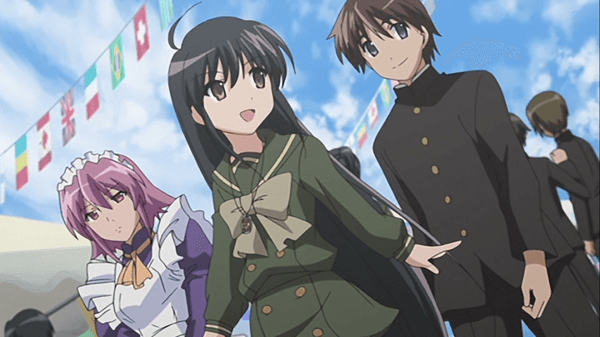 In fact, Shakugan no Shana Season 2 Part 1 manages to dangle plenty of interesting developments in front of the viewer and then snatch them away for later use in Part 2 of the season. While this is fine as this usually helps make those plot points all the more important, that cannot be done with practically everything interesting and new within the first half of a season.

What viewers will get instead is plenty of slice-of-life melodrama as the always tsundere Shana tries to overcome her own personality and try to express her feelings for Yuji while her rival in love, Kazumi Yoshida, works openly to try and earn Yuji’s affections. With the tsundere flavoring of Shana added to the standard romance slice-of-life, the events are usually rather interesting at first, but wear thin after multiple episodes of the same thing. 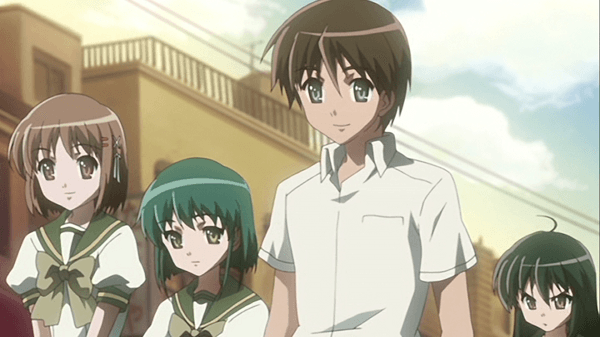 I mean, don’t get me wrong. Slice of life shows are great in their own right and Shana’s tsundere attitude is a major draw still for myself and fans alike, however Shakugan no Shana’s habit of presenting multiple enemies, plot points and developments only to focus on Yuji and Shana’s relationship and the love triangle they are involved in. While there is some development with the side-characters, viewers may feel like the show is simply stuck in a rut as they watch episode after episode of awkward teenagers trying to sort out their feelings in a world with supernatural happenings that pop up occasionally.

In fact, the focal point of Shakugan no Shana Season 2’s first half is the jealousy that begins to build within Shana as not only does she see Yoshida as a rival for Yuji’s affections, but a new mysterious girl named Fumina Konoe begins to take up all of his time and attention as she relies on him for everything. While the haunting similarity of Konoe to one of their worst enemies only bares a brief examination, Shana and Yoshida try to overcome their jealousy overtakes the rest of the season. 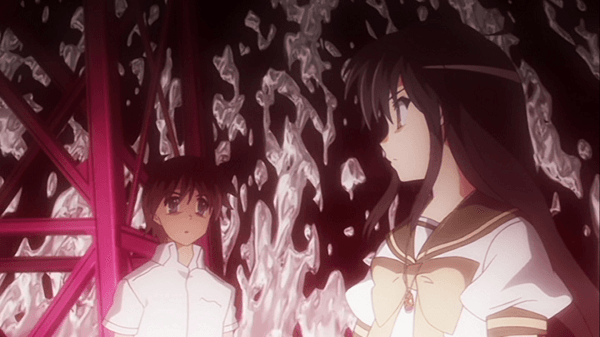 Despite the extremely poor pacing focusing more time than necessary on Shana and Yuji’s relationship, there are plenty of things that can lead into Part 2 of Shakugan no Shana Season 2 being great. In fact, the last minute or so of Part 1 focuses on presenting the new big bad that will probably take up a decent segment of Shakugan no Shana Season 2’s second half, but unfortunately that leaves the first half with plenty of fun times with Shana and the group that begin to wear thin amidst the series’ poor pacing.

Visuals:
As far as video quality goes, you may remember that I mentioned that this series originally aired back in 2007 and while overall, the animation techniques used by JC Staff have remained rather consistent and impressive at times, the series does show its age overall. This means that the Blu-ray offering of the show doesn’t see many improvements over the basic DVD version also found in the package, which is unfortunate but thanks to the impressive detail that JC Staff managed to work into many of the scenes throughout the first half of the show. 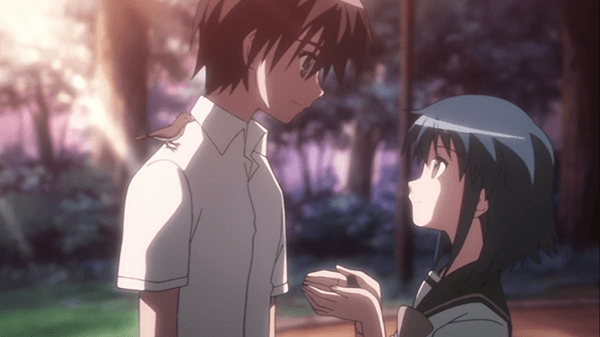 The character design remains impressively well done especially whenever the Shana enters into her Flame Haze mode or any action sequences spring up and whenever the action picks up viewers are in for a real treat. That being said, thanks to the fact that much of Part 1 revolves around basic events and slice-of-life events, the animation can be inconsistent at times, hitting high points for major scenes then losing a lot of that quality whenever the characters step away from these key points and into the slow-paced melodrama that Part 1 of Season 2 focuses almost entirely on.

Audio:
Now although it was great for FUNimation to re-release the first season of Shakugan no Shana on Blu-ray a few months before this release so fans can experience the title in Blu-ray, there is a major set-back here. Thanks to the fact that season 1 of Shakugan no Shana was dubbed by Geneon back in 2006, FUNimation was not able to retain the same voice actors and actresses for season 2. As such, viewers will be in for a bit of a shock when they start up season 2. 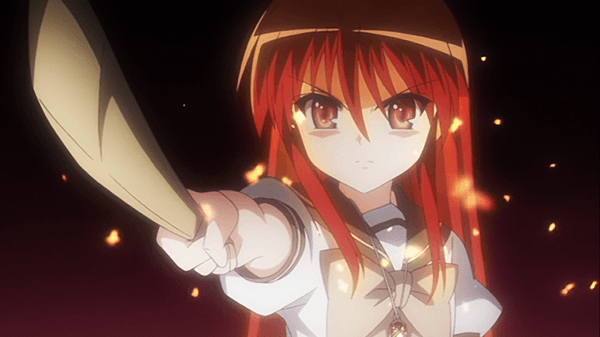 That being said, the new English dub by FUNimation isn’t half bad despite a few characters transitioning poorly between voice work. The reason for this is because Cherami Leigh does an unbelievable job voicing Shana and actually eclipses the original voice for the character, Tabitha Germain. Considering how iconic her Japanese voice actress Rie Kugimiya is, Leigh provides an excellent job matching the tsundere personality of the character and tone of voice.

Unfortunately the new voice for the main character Yuji, which is done by Josh Grelle doesn’t really fit the personality of the character and is a far cry from the original voice. While it may grow on viewers as they watch part one, it still is nearly impossible to make the connection between the voice and the character. Also it is worth noting that Alastor’s (new name pronunciation, more on that in a moment) Kent Williams does his best matching the original voice work but unfortunately falls short. As I just mentioned, a number of terms and even people have had their name’s pronunciations shifted since the original dub, which may or may not be correct but it is something to note. 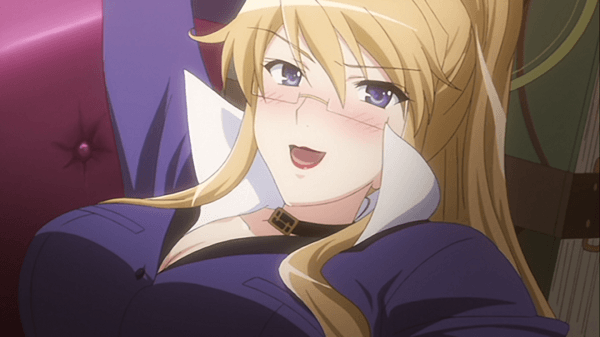 As far as background music goes, Shakugan no Shana Season 2 Part 1 has a rather forgetful set of background music though that may be due to the fact that nearly all of the tracks are focused around the slice-of-life aspect Part 1 focuses on. As far as opening and ending tracks go, the opening track is “Joint” by Kawada while the ending song is also by Kawada and is called “triangle.” Both tracks are enjoyable to listen to and have been paired with impressive animation sequences that help accentuate the song.

Extras:
Part 1 of the second season of Shakugan no Shana actually comes with quite a lot as far as bonus features go. There are your standard inclusions such as a clean version of the opening and ending sequences, trailers for other FUNimation shows, the US trailer for the series and one episode commentary.

However there are a number of other supplementary materials as well in the form of Japanese dubbed only tracks. These bonuses are the promo videos and DVD commercials for Season 2 as well as the Naze Nani Shana II set of bonuses which explain four of the newly introduced terms in Part 1 and two Shakugan no Shana-Tan sequences which see a small chibi version of Shana taking part in various scenes from the series for comedic effect. It is worth noting however that the second Shana-Tan video does include scenes from Part 2 so viewers may want to avoid minor scene spoilers. 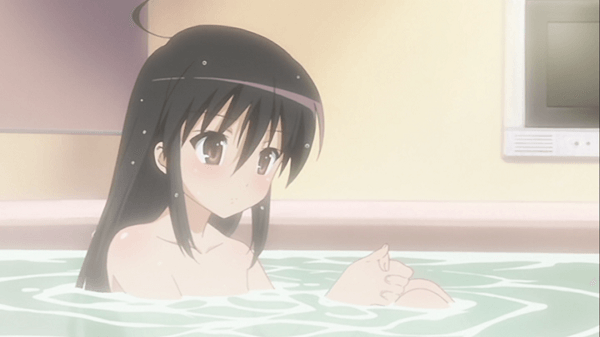 As for the commentary, it is for episode 1 and features the ADR Engineer Chris George as the host, Cherami Leigh the new voice of Shana and Josh Grelle who voices Yuji. The three spend a lot of time discussing the events of the episode and note that this is George’s first commentary. This commentary is rather enjoyable and Cherami mentions how much she enjoyed voicing Shana and how the group spent time studying the first season to try and make the transition to the new cast smoother.

Overall:
While Shakugan no Shana Season 2 may be able to capitalize on the fact that there is plenty of  romantic events and character development to be had between Yuji and Shana as they live out their less than normal lives, the poor handling of these events lead to Part 1 of this season make even the most interesting of characters and delightfully tsundere female lead feel tiresome.

It helps slightly that the second season of Shakugan no Shana features some impressive, albeit aged, animation and a new English cast that hits hard with Shana’s new voice actress. Though it is still worth noting that Yuji’s voice actor feels poorly suited for the character. Ultimately the first half of Shakugan no Shana Season 2 leaves us with plenty of potential for the second half of the season and by the time fans finish watching Part 1, they’ll be more than eager to finally get to the meat of things.