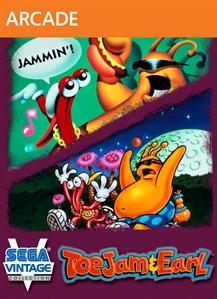 Overview
ToeJam & Earl was one of the first co-op games I had ever played – and to this day, there really is nothing else like it. Half Rougelike, half platformer, and all personality, this funky little title released back in 1991 and became quite a success for Sega, launching two new mascots for the brand and introducing many gamers to a nice blend of hip-hop and funk. Fast-forward 21 years, and we now have the first two titles in one digital bundle – appropriately titled Sega Vintage Collection: ToeJam & Earl. Has time made these duo of aliens wrinkled and old, or is that funk still jammin’?

Story
Never let Earl drive. Let this be a lesson to all of you, as that is where the hi-jinx in ToeJam & Earl starts. You see, our plot starts with our alien friends are cruising about in their rad spaceship, when Earl takes the controls and ends up wrecking their craft on Earth. Shortly after, it becomes their mission to recover all of the ship pieces on the planet, while gathering up as many presents as possible to assist in an odd yet enjoyable journey. 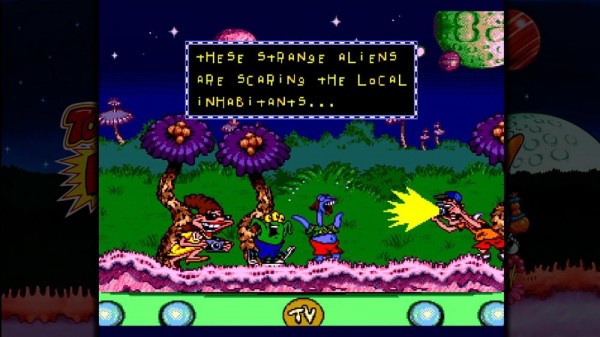 ToeJam & Earl: Panic in Funkotron is a bit different in terms of plot, with Earthlings stowing away on the ship from the previous journey – only to release upon the planet of Funkotron and cause havoc. With the use of an infinite amount of jars and a couple of bonuses, the duo now have to bag all of the crazed Earthlings up and return them back to their own planet. Yeah, both plots are rather simple, but for the time, there was never anything quite like either game. Doused in 90’s hip-hop and humorous references, every discovery and piece of dialogue is rewarding (and now nostalgic) due to the massive amount of personality applied, and the parody of the human race within both titles is exceptional. Crazed obese women with packs of poodles, mad scientists, boogeymen that tip-toe throughout a stage hunting for their next victim, every world discovered within both TJ & E games is just as over-the-top as the next, which makes progressing forward an utter delight.

Gameplay
ToeJam & Earl is a unique take on the Rouguelike genre, complete with randomly generating stages, a hefty amount of items and loot, and of course enemies pacing about – ready to cause trouble upon contact. Every stage’s main objective is to find the elevator and proceed to the next environment. Some of these areas will have a ship piece located on the map, which must be tracked down and obtained to properly progress before boarding to the next level. To do this, players can either go in alone as their choice of ToeJam or Earl (there is no difference other than appearance), or tackle the game in co-op with both aliens participating at once. If co-op is chosen, the screen will split when each character separates from the next, and lives and continues can then be shared amongst both players. It’s a solid formula that never weakens throughout the various terrains and encounters, but presents truly make this experience the legendary title it became. 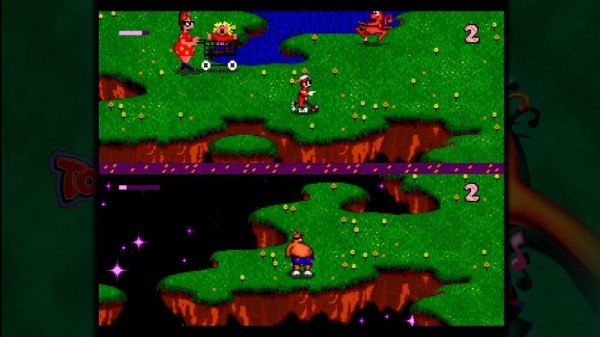 Who doesn’t love presents? On each world, Santa has been busy dropping off gifts across the land, and it is your job to open each in order to receive a unique and mostly useful power-up. Icarus Wings let our friends flutter about in the skies for a short time, Super Hightops offer a boost of speed, and items like tomatoes deliver a solid projectile attack that will completely defeat foes. There is a downside to these awesome abilities however, as some instant death items are inside these boxes, along with other useless techniques that are mainly included to curve the otherwise simple difficulty. Since each gift is in it’s own box, what you receive the first go-around is the luck of the draw, and it’s only from then on that you will know what gift you are opening. Like surprises? Well, ToeJam & Earl offers them up all of the time – for better or worse, and ensures the player is always on their toes when it comes to receiving their loot. 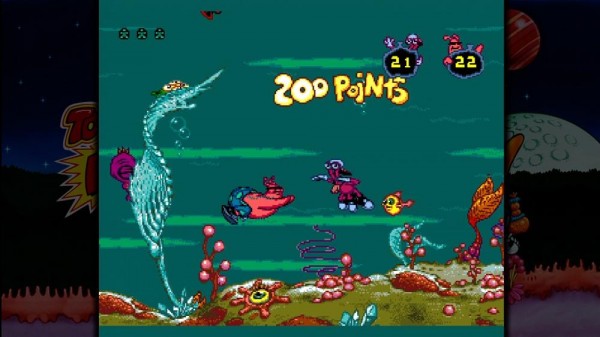 Panic in Funkotron, the second game in the collection, is a completely different experience. Presents are included, but play a smaller role and just offer one of three assists. This title is also in a different genre altogether, as the whole randomly generating worlds gimmick along with the top-down Rougelike perspective has been ditched for the more classic, side scrolling platformer method of gameplay. After selecting a character, the player must explore their environment while following hint arrows that lead them to the missing Earthlings. Once found, you must then toss jars like mad until each Earthling is caught for every stage.

I’ll admit, my fascination with the first ToeJam & Earl was mainly about the presents, but that same charm and 90’s vibe still resonates within this sequel, and the gameplay still never misses a beat – despite the somewhat less exciting (or random) moments within. There are some fun little mini-games that appear from time to time as well as other inhabitants of Funkotron to speak to, which brings out that awesome atmosphere while making both games feel related. 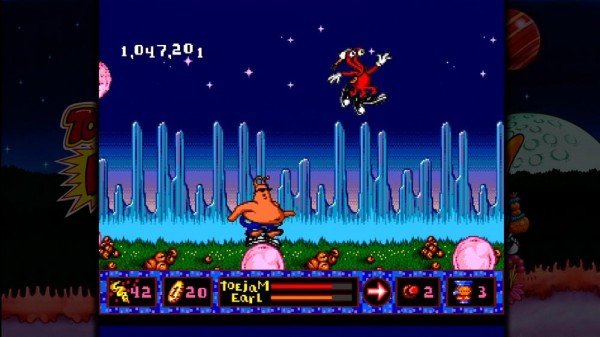 Of course this is an updated collection, so there are a couple of bonuses included for those who may already own the cartridge versions. Online co-op has been added, letting two players go at either title from anywhere in the world. Of course couch co-op is a given (and is still the definitive way of playing either game), but the player can now choose to save either game at any time, providing a very useful upgrade to the originals. Everything else such as the wallpapers and extra options within is just gravy, simply complimenting two nearly perfect gems that have been begging for this type of release.

Visuals and Audio
Even though it was 1991 when ToeJam & Earl first debuted, each title still looks great due to the heavy amount of varied colors used, keeping these two titles from showing their age. Sure, the 16 bit graphics are a given, but that is easily forgivable due to the amount of variation and life that inhabit every inch of whichever version you decide to play. Panic in Funkotron may look a tad more polished due to the later release date, but the original is still full of life – possessing more charm than a great number of modern titles we see today. 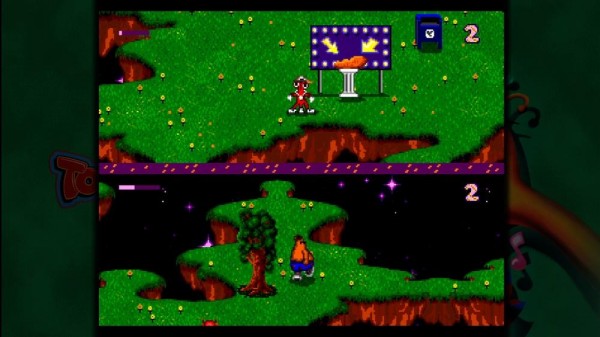 As far as the soundtrack goes, well…there is nothing else like it. I know, I used that term already, but this funky and infectious soundtrack is full of earworms, burying those lovely tunes into your soul – hours after you lay down the controller. Every power-up also features it’s own unique sound effect, delivering further reason to collect each present and try all of the techniques within either game as well. Hearing the fat lady sing, the many “Awesome!” and “YUM YUM YUM YUM YUM!” voice clips used for our heroes, and that boogeyman…boogey are all guarenteed to put a smile on your face, no matter what generation you are from.

Overall
ToeJam & Earl came at a time when originality was needed, and delivered just that in every aspect. The gameplay is still a blast – be it solo or with a friend, and while drastically different from eachother, both games in this collection deliver their offbeat humor non-stop, making for two of the most unforgettable experiences ever made. It doesn’t matter if you have a soft place for retro, or if you have never touched anything past the Xbox 360. ToeJam and Earl are two overlooked mascots that defy age and through tomatoes in the face of Father Time, making this mini-compilation a must for those who are missing that extra funk in their lives.