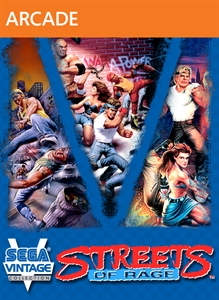 Lately we have seen some new releases under the ‘Sega Vintage’ label, and instead of being just straight up emulations, these are actually proper ports of Sega’s classic games. These releases have so far included three games each, along with a host of extras and new features. Joining this lineup of retro collections is Sega Vintage Collection: Streets of Rage (known as Bare Knuckle in Japan), which includes all three games in the series that were originally released for the Sega Mega Drive (Genesis).

Back in the day, Streets of Rage was essentially Sega’s answer to Capcom’s hit Final Fight series, which at the time was ported exclusively to the Super Nintendo Entertainment System. While Sega would eventually get their hands on Final Fight in the form of a Mega/Sega CD port, Streets of Rage still remained one of their biggest IPs with the series wrapping up as a trilogy on the Sega Mega Drive. While there hasn’t been a new release in this franchise for a very long time (Fighting Force was almost a 3D Streets of Rage title for the Sega Saturn), this new collection that is available for a digital purchase brings back the original trilogy in a very refreshing way. 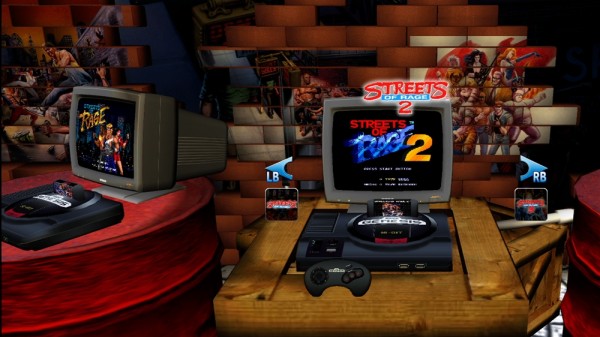 The Streets of Rage series harks back to action movies from the early 90s, in terms of its style, ambience, and general premise. The games feature a classic action movie plot where a group of police officers take on an entire criminal organisation, with their bare fists. It’s really just one of those classic action movie settings where just a pair of cops, without carrying any guns, are somehow able to take down an entire criminal organization by just slugging it out the old fashioned way, because, you know, a whole squad of cops with guns just doesn’t get the job done sometimes.

These games actually do a decent job in storytelling, with cool characters and interesting back stories. The first Streets of Rage title even presents you with an opportunity to make a choice that affects the outcome of the game. Streets of Rage 2 does not offer that kind of choice, instead keeping the story straightforward, but the idea of multiple endings was brought back again in Streets of Rage 3.

Streets of Rage 3 is the most interesting of the lot, offering a very dark and edgy storyline portrayed via several sprite-based cut scenes. What’s interesting about Streets of Rage 3 was that, at the time, its original plot in the Japanese release (Bare Knuckle 3) was deemed too controversial and inappropriate for Western audiences, and so it was heavily modified and censored when it was released in Europe and North America. Thankfully, the original uncensored Japanese release is present in this collection.

Overall, these games have an interesting plot considering the genre and era they belong to, with a cool cast of characters. It’s also nice how the first and third game in the series have multiple endings, adding a bit more replay value to them. 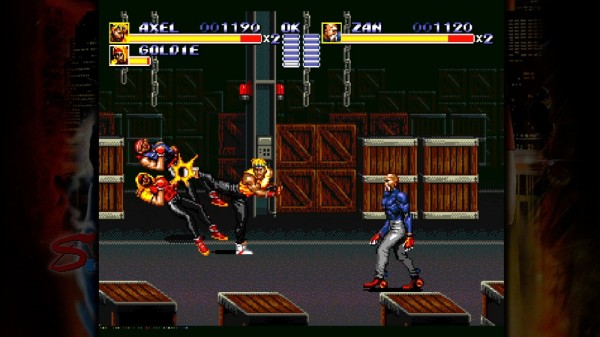 The games in this collection have aged reasonably well from a visual standpoint, as they feature some solid sprites complemented by the cool edgy art style. The graphics improve noticeably throughout the series, but each of the games in this collection still has their unique visual appeal and character. The first game is the most simplistic looking of all, but the sprites still have style and character to them. The general ambience of these titles harks back to the visual style and presentation of action movies from the 90s. One thing worth mentioning is the night club level from Streets of Rage 3, which features some crazy visual and lighting special effects uncommon in a Sega Mega Drive title, but the effects are so intense that it may potentially cause seizures. Like with other Vintage collections, there are a variety of nice filters to enhance the graphics of the game.

What really stands out about the series is their soundtrack, all composed by the legendary Yuzo Koshiro, one of the most innovative and iconic composers of the 16 bit era. His musical style is best described as well…a lot like Michael Jackson, characterised by very smooth, upbeat, and intoxicating rhythms to create some truly memorable pop tunes, perfectly complementing the style and setting of the games. The first Streets of Rage and Streets of Rage 2 feature some brilliant chip-tune music, and in particular the soundtrack of Streets of Rage 2  is amongst the most praised and acclaimed soundtracks of the 16 bit era.

Streets of Rage 3 however is an extremely odd case and is a big departure from not just the musical style featured in the other two games, but also the style of Yuzo Koshiro in general. It features a very robotic and intense hard techno soundtrack that actually sounds pretty dark and brooding at times, with fast and repetitive beats. Personally, I think the soundtrack of Streets of Rage 3 sounds absolutely dreadful and horrifying, and it causes quite the headache.

Overall, this is a very well produced collection. The ports look nice and crisp with the sound quality being a significant improvement over the originals. Great presentation too as you get a nice virtual console set up in the menu and all sorts of cool extras and options to tinker around with. 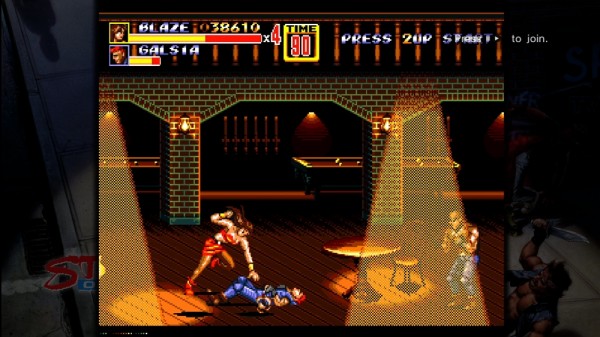 Streets of Rage games are all side scrolling beat ‘em ups, where you walk through various stages while beating down on numerous enemies, with each stage ending with a boss battle. The games are pretty simplistic in nature and are similar to other games in the genre, in particular Final Fight. That said, these are solid games to play, with the combat mechanics getting more interesting with each game.

The first Streets of Rage is the most simplistic of the lot but still a fun game to play, with one button for the attack combos, and the ability to jump (and perform flying kicks), throw, and even call for police backup as a special attack. It gets better with Streets of Rage 2 as it adds more unique special moves for each of the characters and introduces some cool grapple maneuvers. Streets of Rage 3 adds a few more useful mechanics, allowing characters to run and roll.

Mechanically these games are sound, simple, and a lot of fun to play. The games themselves are actually quite challenging with some really tough bosses and constant onslaught of enemies. They each offer a short, but action packed adventure. Streets of Rage 3 in particular is the most intense and challenging game in the collection. 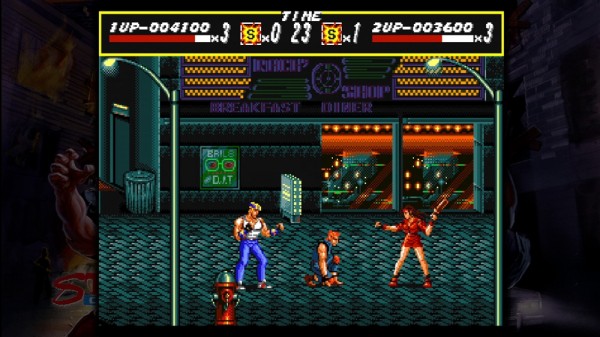 While all these games are perfectly playable and enjoyable as single player games, you definitely want to be playing them with a friend in 2 player co-op. The 2 player co-op offers the true Streets of Rage experience, and they still stand as among the most entertaining multiplayer experiences. Working together as a team, and even competing for the highest score, it really is an addictive and immensely re-playable multiplayer experience. Can’t find anyone for a local co-op session? No problem! Each game in the collection can be played online and the net-code is quite superb. The network play remains smooth and consistent with very minor lag and hitches that don’t break the game. Even when the connection between you and a player is poor, the game still performs fairly smoothly. However, the online play isn’t as good or innovative as the one in Final Fight Double Impact, which offered a superb 2 player online co-op mode where you could have random players join and leave at any time. It would have been nice if this Streets of Rage collection implemented something like this, but that said it still offers a very enjoyable online mode.

Like with the other Sega Vintage releases, you can play all the versions and localisations of all three games (including the uncensored Japanese version). This easily makes it the most essential and complete Streets of Rage release ever, and with the smooth online multiplayer you will be playing it over and over for a long time. 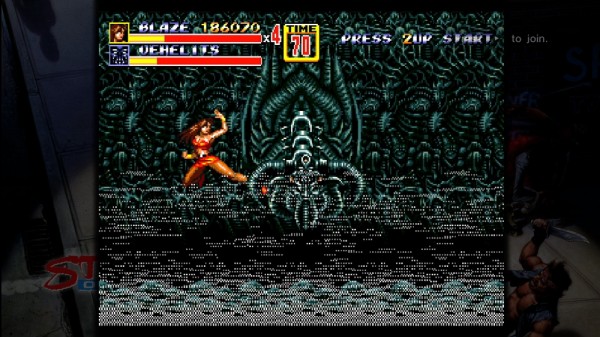 Sega Vintage Collection: Streets of Rage is the definitive release of one of the most fondly remembered and cherished franchises that graced Sega’s 16 bit console. The ports are beautifully produced, as they look and sound fantastic. It’s easily the most complete and comprehensive release the series has seen, and the solid 2 player online mode is the sole reason why you should grab this collection right now and enjoy these fantastic brawlers with a friend.