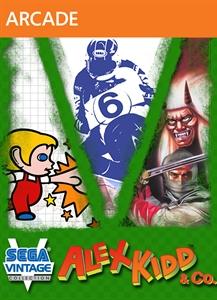 Overview
In the past few years, a lot of classic mascots have celebrated their 25th anniversary. You all know the names of the most popular, as Mario, Link, and Samus are powerhouses that still remain very relevant today due to the steady stream of solid releases. Believe it or not, Sega also have the same aging heroes, but none of the 25 club on that end really stuck around apart from a few cameos. Remember Alex Kidd? Shinobi? How about the arcade classic, Super Hang On? Well, each have turned a quarter of a century this year, and while this anniversary doesn’t have a huge celebration, it does now have 3 ports packed into one small digital collection by the name of Sega Vintage Collection: Alex Kidd & Co.. Yeah, it’s been a while for these gems, but do they still retain their shine? Let’s find out. 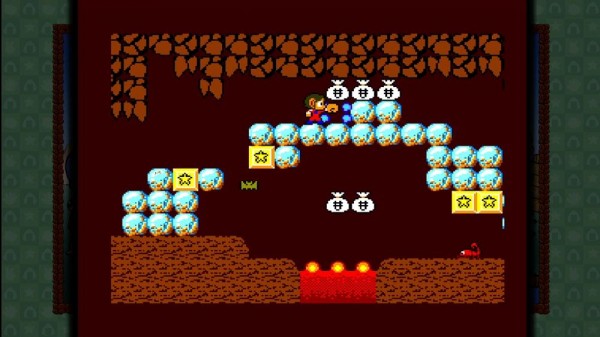 Gameplay
When starting up this collection, the player is taken instantly to a nice little menu that features all three titles, Alex Kidd in Miracle World, Revenge of Shinobi, and Super Hang-on. Now the most notable of all three is probably Alex Kidd, as back in 1987, platformers were taking off like a rocket due to Mario, and Sega touted the young boy as their own mascot before later replacing him with Sonic a few years later. Those who go into Alex Kidd expecting an experience like Mario however will be completely disappointed as Alex is much slower, and controls completely different than a good number of other heavy-hitters of the genre.

In Alex Kidd in Miracle World, players of course take the role of Alex Kidd as he aims to save his brother from an evil tyrant. Alex has two moves to his disposal from the start on this journey, which include jumping and a handy punch technique. With this mighty punch, Alex can jab through blocks to obtain items and clear a path, or decimate enemies in one blow. This is all simply done with the face buttons on the controller, as Miracle World is a two button game due to it’s Master System origins. The only drawback of this melee move is that the range is very short, which means Alex must handle all foes up close and personal. Yeah, this would be fine with a lot of other heroes, but just one brush with an enemy can kill you instantly, so moves must be done a bit more strategically in order to take down a large target or boss. It’s not really a negative, but something that fans of more polished affairs will have to get used to. 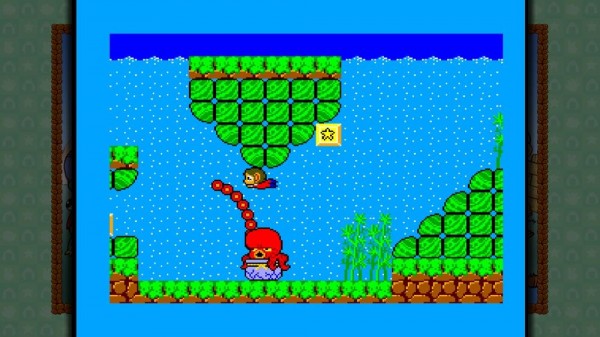 A currency system is also in play that allows our hero to trade his cash for loot. These rewards include the likes of a pedal-controlled helicopter or a motorbike, making for a great incentive to smash every brick in sight. Now, there are some enemies that come out of these bricks, and require you to literally run to the next screen before they stop chasing poor little Alex, which can feel rather punishing considering the one-hit kill scenario involved. Luckily, each time you die, the game does reset the player close to where they left off, where you can then resume your climb through the game’s 17 stages. From the unforgiving yet still satisfying platforming to the entertaining games of rock-paper-scissors, Miracle World is still a good game, but you can quickly see why Sonic took this throne due to the stiff gameplay mechanics involved that have a bit of a learning curve for newcomers.

Next up in the collection is Revenge of Shinobi, which was a follow-up to 1987’s Shinobi for the Master System. This title is a bit more lacking in story, and stars a ninja known only as Joe. For those unfamiliar, Revenge of Shinobi is a side-scrolling platformer where players must take out all of the opposing forces with their blade and throwing stars, and also can utilize a good number of power-ups to conquer the eight stages within. 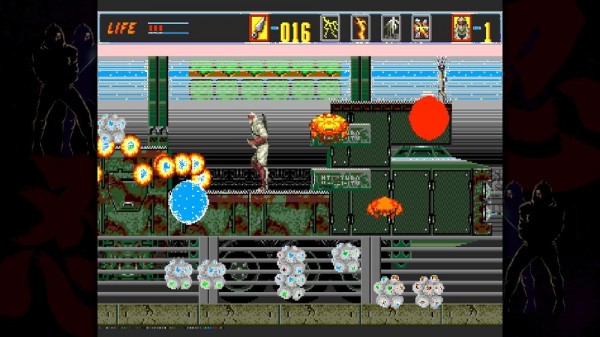 The controls are also simply mapped this time around, with a three button, d-pad scheme being used for Joe to move, attack, and of course use his Ninjitsu techniques that offer great assistance during more hectic situations. The age for this game is also not as obvious compared to Alex Kidd, as the animations are a lot less stiff and the gameplay itself is much more fast paced. It’s definitely no Ninja Gaiden, but Revenge of Shinobi is a classic that is still quite decent, despite it’s rather short length.

The final game to speak of is one I almost didn’t remember playing long ago, and one I personally thought would be a chore to play yet again. Super Hang-on is your basic arcade racer with motorbikes, and has the player simply try to last through a race before the timer runs out. Yeah, it doesn’t sound exciting by any means, but when you are 10 seconds from reaching a checkpoint and have to pick up speed just to do so, the gameplay get’s a more intense. Other racers can throw you off balance, a lack of proper turning can quickly throw you off the track and into a nice billboard featuring a toucan (which is just one of many). 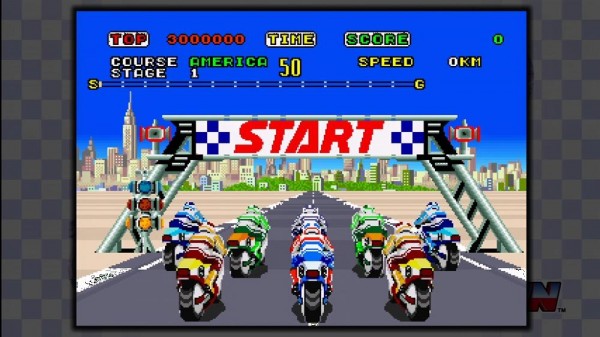 I was honestly surprised how much I fell in love with Super Hang-On this time around, as even though the game surely shows it’s age, it still remains exciting and delivers an arcadey experience I haven’t felt in quite some time. There are four tracks in all, with increasing difficulty and length depending on which locale you visit. I should also mention that this title is also pretty challenging, even on the “easy” mode within. With a bit of practice and patience however, you can quickly memorize each path and begin snagging every checkpoint in no time. 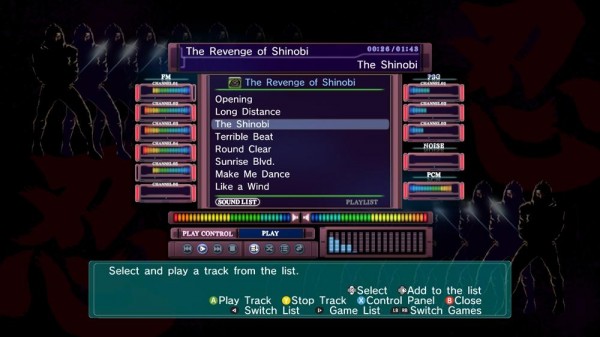 Extras
Even at just ten dollars, some may find it hard to justify ports of three twenty-something year old titles. That’s totally understandable, but Sega did sweeten the deal with a good number of extras that have been packed within. Each release features more than one version, with Alex Kidd donning a European and Japanese port, as well as the second North American version that came included with the Master System. Shinobi also has the other regions included, but aside from a few different foes and other minor touches, there isn’t a ton of difference between them all. Super Hang-On doesn’t have these extra features, but does include a much more challenging “Upright Mode” that offers a great reason to jump back on your bike. Online Leaderboards can also be found for those who crave speed-runs and high scores, and if you love those 8-bit tunes , a Jukebox for each title can also be found where you can play through each in-game soundtrack as you please.

Visuals and Audio
I really don’t feel right judging graphics for such old titles, so I’ll keep this nice and short. Revenge of Shinobi is the best looking and most detailed of the three games within Alex Kidd & Co., and the animations are still as superb as they ever were. Alex Kidd isn’t nearly as attractive, but due to the bright colors and pixelated charms, the atmosphere is much more inviting to those who want something a bit more cheerful within this collection. Super Hang-On is pretty light on anything substantial visuals-wise, but that doesn’t really matter, as the gameplay is the star of all of the races. By today’s standards, all of these retro romps look heavily dated, but those who are even interested in this pack whatsoever surely know that anyway and that blast of nostalgia makes up for the lackluster 8-bit sprites quite nicely. 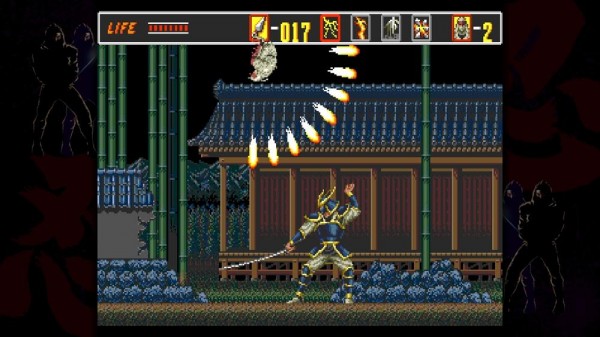 As far as music goes, there is a reason each soundtrack was included. Each tune sounds exactly as it did years ago, and these catchy earworms are sure to put a smile on all of the faces that played with the ninja, biker, or monkey..erm..boy (what is he again) when they made their debuts. As far as sound effects go, expect a good number of bleeps and bloops from Alex Kidd, some knarly slashing from Shinobi, and a very loud engine in Super Hang-On. Again, finding a love for all of this is just a matter of preference, but there is surely to be quite a few who played the games like myself, with the speakers up and my nostalgia goggles strapped tightly to my face.

Overall
25 years is a long time in the gaming industry, and if you see a title go unforgotten in that timeframe, you know you are dealing with something special (some however are remembered for the wrong reasons). I’m sure Sega know that these ports are not from the cream of their own crop, but like it or not, all three of these titles are legendary by their own merits and it’s a pleasant sight to see such a solid package put together for the fans that played them so long ago. Yes, this is nothing but pure fan service all the way and if you have yet to visit Miracle World, take the blade of Joe, or feel your stomach drop as you raced to the next checkpoint, there is not better time to invest in this small, but lovely package.