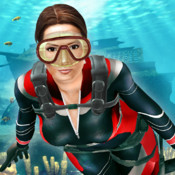 Overview
Earth. Birthplace of the human race and countless other creatures that call this big blue marble home. In reality however, only 30% of Earth is actual earth, leaving a whopping 70% covered in water. With this majority rendered uninhabitable to us air breathers, it’s no wonder people became curious. Thus scuba diving was born. Now people from all over dive down into the depths, intrepid folk who carry a sense of adventure. However, if you’re lacking in said department, why not just take a virtual tour of the ocean floor? It’s just like the real thing, except with a lot less water. 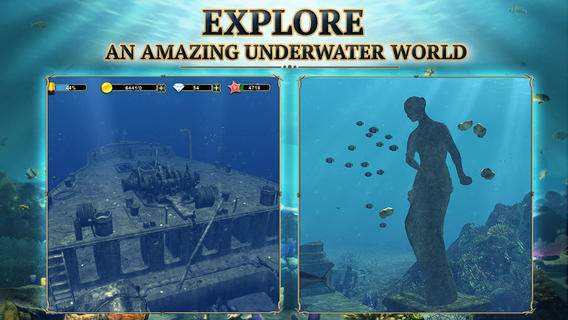 Story
You are Nicole Lourie, a decisive journalist constantly on the hunt for the next big scoop. Taking a brief detour, you find yourself in Thailand where Eddie, an old pirate friend, presents a proposition: Find and return his back pack that he lost investigating a crash in the ocean in return it. Donning your wetsuit for the first time in a long time, you set off into the big blue and search low and lower for the object that will net you some priceless information.

Anticipating your curiosity and ardour for the truth, your dear friend Eddie continues to seek your assistance, citing the discovery of ruins resting on the ocean floor. Naturally you accept and your adventure continues around the world. But as you seek award winning articles, the truth behind your father’s last pieces of work remain ever distant. Perhaps this global trek will reveal the secrets you truly wish to discover. 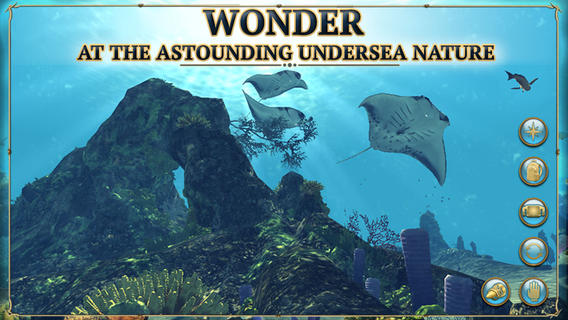 Gameplay
True to its intention to throw you into the life of a (reluctant) scuba diver, the game is played entirely from a first person perspective. To give you a little direction in the immensity that is the ocean, each locale is divided into missions and each mission contains objectives. Complete these to proceed. Classic game scenario. The game is based around three different modes: Exploration, Photography and Fish Feeding. All the major components of diving. By pressing the switch button, you are easily able to shift modes and complete each underwater task. Exploration mode allows you to search the ocean for lost treasures, even providing you with a hand radar system to make things a little easier. Photography is pretty self explanatory, though you will only be able to take a small amount of shots, so make them good ones. The percentage bar should help on that one, 100% means perfect. Again, a pretty self explanatory venture. Do I really even need to explain Fish Feeding? In this mode, you feed fish. Also you can take pictures of them. Simplicity aside, each task will net you experience, which will in turn allow you to level up and buy better equipment. So give everything a go, you just might like it. 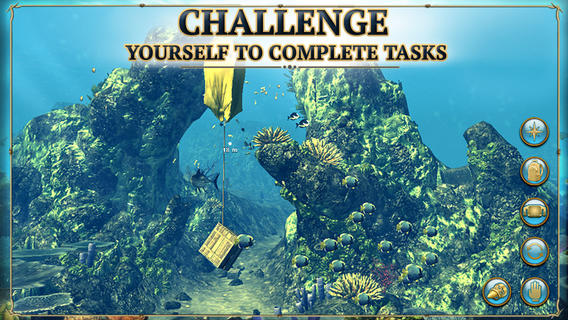 Progressing through the game will also net you a few minigames to complete. Whilst controlled similar to the main game, there are a few differences imposed to keep things interesting. In one particular game, you are unable to move, instead you must turn on the spot and search the immediate vicinity for hidden treasures. You are also given access to new elements that exist to assist you, such as an item that stops the clock. There’s even one that immediately uncovers five treasures for you. Helpful.

The main difficulty in the game arises from the time limit imposed on you as each mission begins. Being underwater you must rely on an Oxygen tank and when it runs out, the mission is over. So don’t dawdle, lest you be forced to complete the same objective over and over and over again. Should you really not wish to replay a mission, you can purchase an emergency air tank that will allow you to continue. This, however, will cost you diamonds, the game’s secondary currency. And wouldn’t you know it, it’s the currency you can purchase with real world money.

Being a free iOS game, Scuba Diver Adventures features all the classic handicaps that come with such a position. The diamond currency exists as a shortcut to higher ranked items, at the cost of genuine money. Though in all honesty it’s not that big of a deal. The option is there should you want to use it, so feel free. The main issue I found with the game’s currency system instead lies in gold. Found within the game itself, you can easily bolster your riches and spend it on upgrades to enhance your dive time, camera, swim speed, you name it you can buy it. However, the game will occasionally provide you with an annoying ultimatum regarding your air supply. In the case that you have used up your collection of tanks, you will be forced to either pay for a new one or wait a designated amount of time. I understand that this mechanic is prevalent across the mobile gaming world, but I’ll never understand why a game would willingly force you to wait until you can play again. It just doesn’t make sense. 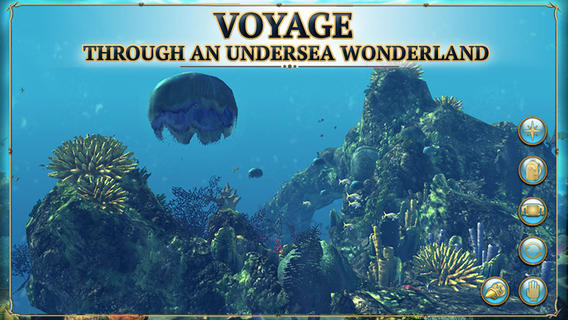 Visuals and Audio
One of the major selling points of the game. That’s not just a personal opinion, with the file clocking in at over 1GB, a great deal of effort was put into making the game look good. Which it does. Though the graphics themselves are not revolutionary, they definitely stand out from what you’d expect an iOS game to look like. The 3D models all hold up fairly well, though their movements possess a sense of rigidity at times that does remove some of the majesty the game was clearly going for. That being said, there’s actually a pretty decent range of fish types presented within the ocean. It might not sound like a big deal, but when fish are the only thing swimming between you and a blue abyss, you’re going to notice the types.

In line with the more advanced graphics, the game is also fully voiced. Now, this is probably one of the most important features that the game possesses. Honestly, if dialogue was presented through text, playthrough would have been exponentially more tedious. I’m not trying to attack the gameplay, but without the voices breaking up the mission progression, taking a photo of fish for the umpteenth time would have gotten on my nerves even more. That being said, the voice cast didn’t exactly provide a stellar performance. The staggered delivery of lines and slightly off inflections made it quite clear that the cast was speaking directly from paper. Props for efforts though. If that’s really the type of thing that bothers you, simply turn down the voices and enjoy the lilting piano that comprises the soundtrack and drift off into your own world. 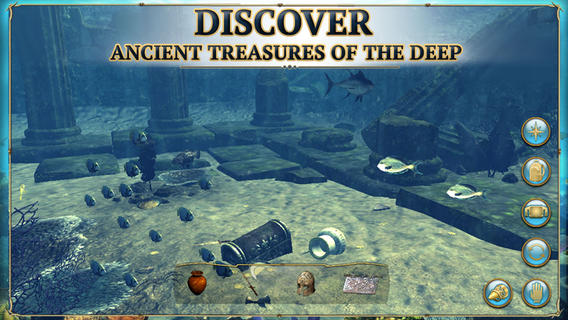 Overall
Scuba Diver Adventures: Beyond the Depths is an interesting concept. In my long list of game scenarios, scuba diving was not anywhere near the top…or on the list at all. Regardless, the game provides a fun little expedition beneath the waves that will provide you with a decent level of entertainment. That is until you run out of oxygen and have to wait a few minutes to play again. Seriously, the most annoying feature of the game. So suit up, grab your camera and fish food and take a trip into the 70% of the world that’s significantly wetter than the other 30. Just watch out for sharks. They’re those things that look like angry dolphins.