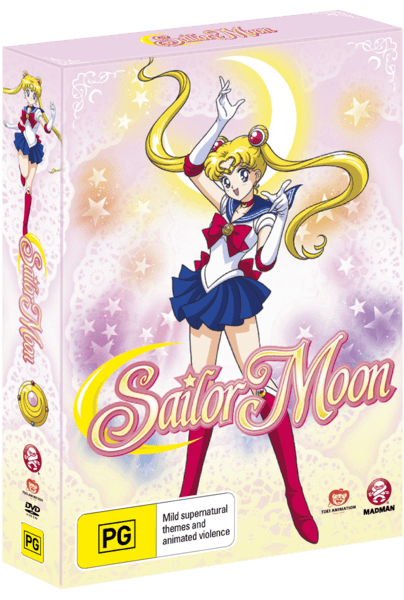 Overview
Usagi Tsukino is a 14-year-old middle school student. She is clumsy at times, is always late to school and is more sensitive than those around her. She mainly spends time with her friends Gurio Umino and Naru Osaka. On her way to school one day, she comes across a cat with an unusual appearance. This cat reveals its name to be Luna and informs Usagi that she is a Sailor Guardian. Usagi must now search for the other Sailor Guardians and the Moon Princess.

Story
By now, magical girl series are something most anime fans are familiar with or have at least heard of. Sailor Moon may in fact be the first anime series many people saw, or at least one of the first. Newer anime fans may be more familiar with modern and darker entries into the genre such as Puella Magi Madoka Magica, Fate/Kaleid Liner Prisma Illya or Yuki Yuna Is a Hero. Sailor Moon was not the first magical girl series produced in Japan, but the basic formula has remained the same for over two decades now, if not even longer. The three other series mentioned above may appeal only to specific anime fans, but this series has a more broad appeal. Some of that appeal may be due to nostalgia, but the series holds up as possibly the greatest magical girl series of all time. The Monster of the Day format has a negative stigma attached to it, but it works in this series. It is worth noting, however, that Naoko Takeuchi’s original manga series features significantly fewer monsters than this anime adaptation does. Seeing the Sailor Guardians transform and defeat each new monster that the Dark Kingdom sends their way never becomes dull. The obvious deviations from the source material may bother some fans, but they do not detract from the quality of the story. Those who prefer fast-paced action may dislike the slow pace of plot progression throughout much of the series, but each episode is engaging and entertaining whether or not anything significant occurs in them. 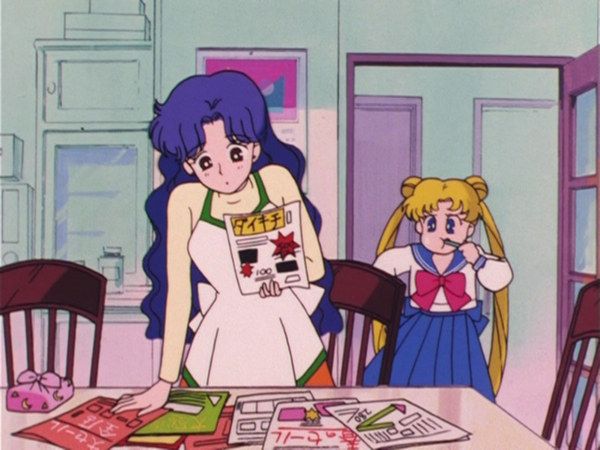 One of the many things Naoko Takeuchi does well is to make the protagonists relatable. No matter what your gender, many of you will see yourself or someone you know in one of the characters. Usagi Tsukino is the person who just cannot get to school on time and just wants to spend their youth having fun. Ami Mizuno is the person who wants to be successful and does not share the same interest in having fun. Rei Hino is the person who has a strong personality but is also a good friend. While these descriptions may make it sound like these characters are not three dimensional, that is not the case. They all go through significant character development and grow not only as individuals, but as teammates and friends as well.

It is not easy to create antagonists who are not simply annoying. Despite this, Naoko Takeuchi knew what she was doing when she created the Dark Kingdom and its people. The Dark Kingdom is shrouded in mystery throughout the first half of the season, but the antagonists shown so far are intriguing characters. Nephrite in particular is surprisingly three dimensional for a villainous character, and he even goes through a significant amount of character development. This makes it possible to forge an emotional attachment to him towards the end of his relatively short arc. Furthermore, the episodes towards the end of his arc are some of the most powerful and moving episodes so far.

Visuals
This series features some of the most iconic animation in the history of anime. The transformation sequences and the poses, in particular Sailor Moon’s poses, are extremely memorable. Those sequences may be reused in most episodes, but watching them again never becomes dull. The character designs are beautiful and all stand out. These days, it almost seems as if unique character designs are a thing of the past, but Naoko Takeuchi created many unique and engaging characters. They feel like they could almost be real people, and the staff of this animated adaptation deserve a lot of credit for bringing these characters to life. One thing in particular that stands out in comparison to other anime series is the use of lighting. There are many thematically dark scenes throughout the series, and the animation team does an excellent job at enhancing the atmosphere of a scene through a seemingly simple but effective use of lighting. 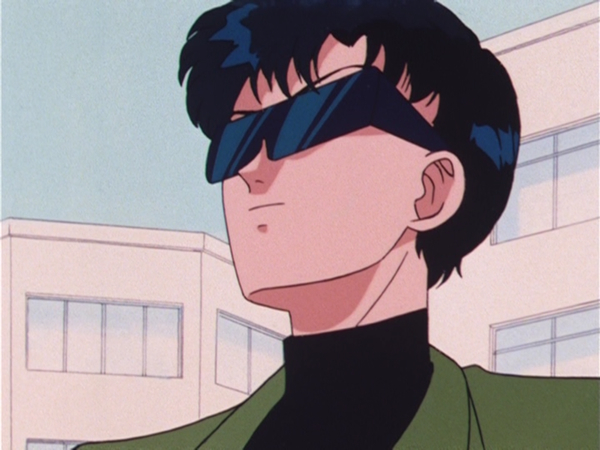 Madman’s release uses Viz Media’s subtitles, but they did not replace the romaji in the subtitles for “Moonlight Densetsu” with English translations. This may only be due to contractual reasons, but many fans reasonably consider this a problem. The subtitles are otherwise almost perfect except for one or two insignificant mistakes. Many fans were more outraged at Viz Media for what they perceived to be a poor remaster of the first season. They complained of issues such as brightness levels supposedly being altered in some scenes, but as a representative of Viz Media stated, they did everything they could with the masters they were given. As such, there is not anything wrong with that release. Surprisingly, it actually appears to that Madman received different copies of the episodes. There are many artefacts present in these episodes, and the colours occasionally appear to have faded a little more than expected, but the remastering process Madman put these episodes through is clearly almost perfect. The only major problem now is that these episodes have so far only received a DVD release in Australia. The menus on these discs are completely different to the menus on Viz Media’s discs. “Moonlight Densetsu” plays while on the main menu, but the ‘Episodes’ and ‘Setup’ menus are silent. The images featured in the main menu on each of the discs are noticeably rough around the edges, and there are only options to view the episodes with the English dub or the original Japanese audio and English subtitles. Viz Media’s Blu-ray release contains more options in their set-up menu, but the main subtitles on these discs can at least be turned off if you would like to view the series without subtitles for the Japanese dialogue.

Audio
The music featured in Sailor Moon is some of the best music anime has to offer. The opening song, “Moonlight Densetsu,” is one of the most popular anime songs of all time. It is memorable, catchy and always thoroughly enjoyable to listen to. The ending song is also significantly better than the pop songs used in modern anime series, but it does have a somewhat ’90s sound. This is common with ending songs produced during that period, so it is not something that should be considered a problem. The background music is just as memorable and catchy as the theme songs are. Takanori Arisawa’s compositions are perfectly suited to every scene they accompany, no matter what the tone. The transformation sequences in particular are accompanied by some of the most memorable music in the series. Arisawa was incredibly talented at creating powerful, beautiful and memorable music, so it is a real shame that he is no longer around. It is worth mentioning that a cheaper reprint of the original soundtrack CD release of the first season is currently available in Japan and can be imported from online retailers. 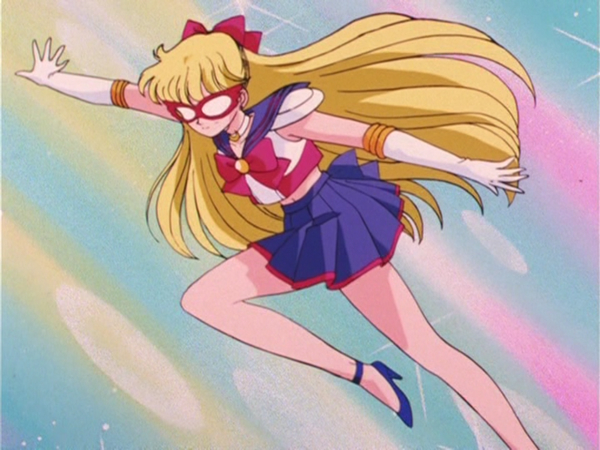 It can be assumed that Viz Media’s English dub is better than DiC’s English adaptation from the mid-1990s without even hearing it. The casting decisions are better this time and have been very well received. However, the voices do not sound like the original Japanese voices, and while that is not always a bad thing in English dubs, the main characters sound more American than Japanese as a result. Whether you find the dub suitable or not will depend on your individual tastes, but the voices in the English dub just do not suit the characters like the original Japanese voice actors do.

Extras
There are significant differences between Viz Media’s limited edition release and this release. The back cover art from the DVD set is reprinted as a one-sided sheet and attached, albeit only barely, on the back of the box. It can be removed, but the way it is stuck to the back gives the box a somewhat cheap appearance. The cover of the DVD case is reversible; the reverse side features artwork of Queen Beryl, Jadeite and Nephrite. The booklet included replicates 29 of the pages from Viz Media’s booklet, but it is unclear why the other 59 pages were not included. The missing pages include a full page introduction to the series, an episode guide for all 46 episodes of the first season and song lyrics in both the original Japanese and English. What is included in Madman’s booklet are the character profile pages and the artwork pages from Viz Media’s booklet. For anyone planning on watching the series for the first name, the content of both versions of the booklet will spoil certain plot points, including plot points from later episodes in this season. The behind-the-scenes footage from the production of the new English dub and the textless animation for “Moonlight Densetsu” and “Heart Moving” are included, but the art gallery and other videos produced for Viz Media’s release are not. The significant number of missing pages makes the extra $20 cost for this limited edition set somewhat questionable, but the important features of Viz Media’s art book are included. Ultimately, whether or not the differences are an issue or not will depend on individual opinion. 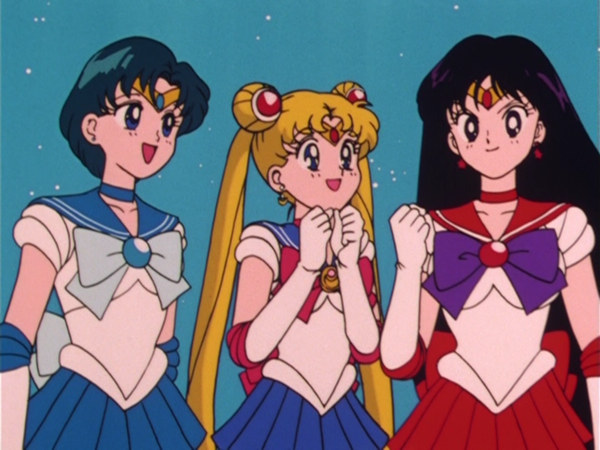 Overall
Sailor Moon can be considered a perfect anime series. Like many anime series produced in the 1990s, some elements of the series date it in a specific real world time period, but this can easily be overlooked. The characters, the character designs, the writing, the artwork, the animation, the voice actors, the music, or in other words, everything, combine to make this one of the most memorable anime series ever. It has an important nostalgic value for many anime fans, but it is also accessible to anyone else who is interested in this series. It takes almost no time at all to forge an emotional attachment to the characters and become invested in the story, and there are moments in the series that are incredibly powerful, moving and beautiful. 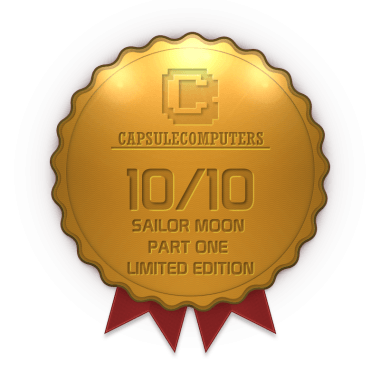