I know what you may be thinking – not another game with an acronym title – but it’s not what you might expect. Do not be deceived, as unlike ODST (Orbital Drop Shock Trooper), HAWX (High Altitude Warfare eXperimental squadron), MAG (Massive Action Game) – I could continue to a point where you’d be begging me for mercy – RUSE doesn’t actually stand for anything. Well, at least as far as we know it doesn’t (some users over at the official Ubisoft RUSE forums have resorted to guessing). It bucks the trend of acronym titles emerging in recent years, and much like the whole idea the game revolves around, tricks you by leading you on to assume something that isn’t true. I say this because this forms basis of the game: trickery, leading people to false assumptions, and all manner of other decoys and such. Topped off by the fact that the definition of a ruse is “an action or plan which is intended to deceive someone”, in hindsight, the title seems to be quite a fitting one.

Deception is the essence of RUSE’s gameplay, and it is this aspect in which sets RUSE apart from the crowd, lifting it from being a me-too title into something with an edge, offering a different experience from other strategy games. After all, deception forms the foundations of real warfare. It is usually huge contributing factor into the start of wars, and is certainly a deciding factor into who wins and who loses, so why not imitate this in this display of virtual warfare for a truly authentic experience. Obviously Ubisoft paired with Eugen Systems are in whole-hearted agreement, leading to the creation of this Real-Time Strategy title, with the unique selling point of ‘ruse cards’. These are the power-ups which cover a range of areas, but all circulate around the idea of deception. The three different types are:

RUSE is a strategy game that presents you with both genuine battles and speculative “what if” scenarios from the Second World War. This is the entire time zone in which the game is based, to give you an idea of the type of weapons, vehicles and technology used in-game. The date of each battle can even affect certain aspects of the game, for example, in multiplayer if you set the period in time to 1945 as opposed to some of the earlier options, the content of the battle will be changed so that the fight will be on a larger scale and generally more hectic. 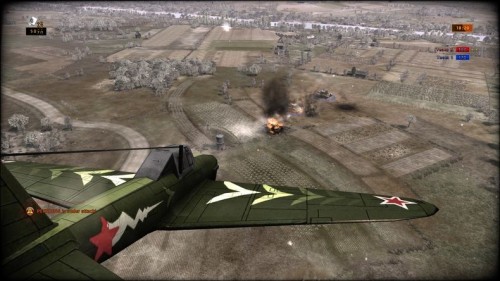 The story has you playing through the World War II campaign as the American Major Joseph Sheridan, a college drop-out turned master tactician, as you guide the armies at your disposal to victory. Never fear though, for you do have assistance in the form of a sharp-tongued Englishman, and later in the campaign you can inherit other factions of troops for use. You even get to play as General Major Erich von Richter once you’ve progressed far enough. Rather imaginatively, as looking over your troops and scrolling between units from the sky isn’t a realistic scenario, a small quirk of the game is that if you zoom out far enough, you can overlook the table in which you have the map spread out across. This is because in actual fact, you play as the tactician issuing orders from the safety of your bunker, similar to the situation you find yourself when sitting down with your controller. This is a nice touch by the developers, and compliments the RTS nature of the game.

However, this is only zooming out. When zooming in, the game reveals a whole other level of beauty. From distance the graphic look nothing special, even sub-standard at times, but when you start to zoom in you reveal the intricate detail put into the game. You quickly discover from the definition on the scenery and the graphics on the sea that RUSE has made an effort to use your consoles processing power. Occasionally, the textures of the game can take a while to catch up with you, like when scrolling over the map and it takes a few seconds of loading to generate the rocky surface of a mountain. Also, one drawback of the zoom system is that it doesn’t really zoom in quite far enough. You always feel like a spectator of the battles and never part of the action because you never get down ground level to get a feel for the gritty warfare.

The campaign expands over a number of vast, fully realised game-worlds as you travel all over the world in the various missions, to locations like Germany and Africa. It’s a very diverse single-player campaign, with action changing between attack and defence from mission to mission, and such a great level of difficulty, not only would it challenge the most seasoned of gamers, but to a point where most will have to retry each mission at least once to work out and, in turn, perfect the tactics needed to prevail. The less-experienced of you could struggle as a result, and unprecedented levels of frustration can ensue for those who are prone to a heated temper. Bear in mind, that’s before you start upping the difficulty settings to the hardest level too. However, there is some conciliation in that the controls are well mapped out, so playing an RTS on controller instead of a keyboard and mouse never feels like a compromise. The game can also hold your hand through the game if and when you need it, with tips to break you into it in the early missions, and intelligent AI which has a decent degree of common sense. For instance, when you direct infantry to a destination, they will automatically travel on a nearby road if it’s on the way, in order to save time. 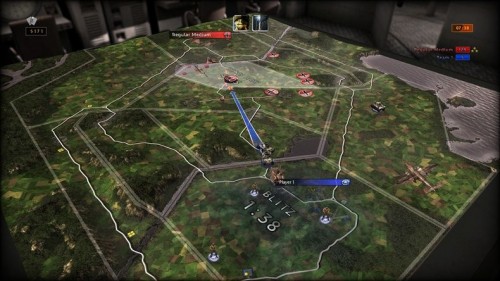 Then there’s the multiplayer options, which open up an unparalleled level of strategy when compared with single-player. Espionage, decoys and ambushes are all well and good on CPU controlled armies, but when used on a human opponent, they can make for some really smart warfare. There is co-op in which you can use your tactics for good to combine against the enemy, or alternatively online multiplayer battles, in where you can use your devious scheming with the help of ruse cards to overcome your rivals. Both feature a great level of demanding tactical play, where if you don’t use your logic and cunning, you will be easily trumped by opponents. RUSE also features Uplay, Ubisoft’s special reward scheme in which you can trade Uplay points earned in-game for bonuses. These bonuses vary and provide an incentive to complete extra challenges other than the usual achievements.

In conclusion, RUSE offers an intelligent take on the RTS genre, with impressive tactical values that would be a valiant effort on the PC (which RUSE has also released on), let alone on a console. The story can be a little dodgy at times, with some slightly peculiar voice-acting and scattering of old neologisms, which is just about acceptable given it’s historical context. The visuals are good for the most part, especially considering the scale of battles, with only a small amount texture loading times and slowdown in framerate. Multiplayer also allows for an incredible amount of strategy with the help of the ruse cards and the theme of deception, and much like a well fought game of chess, it requires the use of your brain which is something you can’t say for other games. On the other hand, it is still debatable whether or not the Real-Time Strategy genre works on consoles although the well thought-out controls shows that the genre can still produce a good game in the right hands. Whether or not they are up to the same standard as their PC counterparts is another question all together.