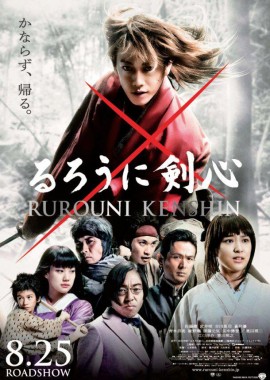 Overview:
Without a doubt, the most anticipated film of the 16th Japanese Film Festival was Rurouni Kenshin, the live-action adaptation of the classic samurai manga. As with all adaptations they are ultimately compared to their source material, so how does Rurouni Kenshin stack up to it’s origins? Better than one could have hoped. Rurouni Kenshin is a non-stop thrill ride, the likes of which have not been seen in recent memory. This is how you handle an adaptation, much like Kenshin’s back-blade, with deft accuracy but enough creative spin on the norm to differentiate it. Rurouni Kenshin, isn’t just good. It’s damn good. 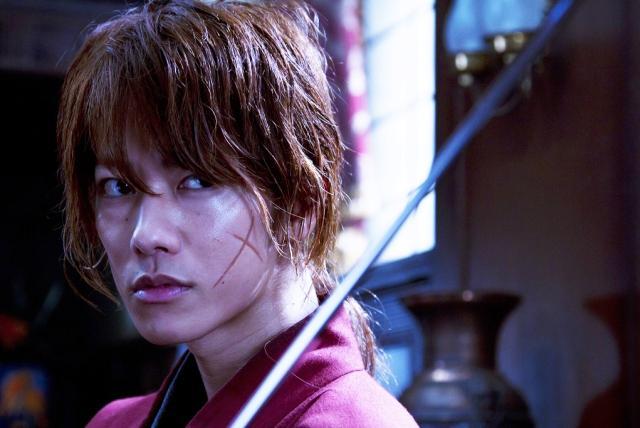 Story:
Rurouni Kenshin follows the wandering swordsman (aka. rurouni) Himura Kenshin. He is a drifter, with little direction other than where ever life leads him. He once fought to kill, but after the end of the war that brought about the New Age, Kenshin saw the error of his ways and made the decision to never kill again. This is of course the main focus of the story here, Kenshin doesn’t want to kill, but can not killing cause just as many problems as killing? Thus is the quandary of Rurouni Kenshin, are some people better off dead?

First and foremost I must say that this film features some of the most eclectic action sequences I have seen in years. I watched with my jaw slightly ajar instilled by awe. The action is well choreographed and a pleasure to watch, thankfully due to the great deal of substance behind it. In a particularly chilling scene in which Kenshin’s back-story regarding his scar is revealed, we are treated to what is a beautiful scene of combat in a road becoming littered in cherry blossom petals as they fall ever so mystically around Kenshin and his opponents. This scene in particular tells us a lot about the character of Kenshin, but we will get to that soon. It is worth mentioning the film’s pivotal fight scenes at the mansion towards the end. The battle of Kenshin and Sanosuke against 250 former samurai is pulse-pounding to say the very least and features some incredibly creative movements such as Kenshin running sideways along the ground whilst slashing at his enemies. It is a scene that must be seen to be believed. In the end though it all comes down to emotion, thankfully this is something that Rurouni Kenshin has in troves.

The theme of killing is explored with delicacy and on occasion verges on profound, especially the aforementioned sequence of how Kenshin got his infamous scar. What makes killing okay? What makes killing wrong? These are some of the questions the film sets out to answer and although it never truly provides a solid answer for either conflicting question, much like Kenshin the film doesn’t force ideals upon you, it simply states it’s view and let’s you make up your own mind. 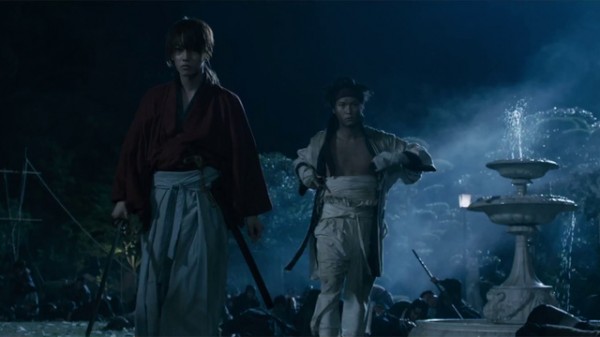 The characterization here is all pretty spot on with a few minor changes, which ultimately don’t impact things too significantly. Himura Kenshin himself though is easily the most well portrayed and developed. Throughout the course of the film we come to know and understand Kenshin as a person. One thing that stands out most about Kenshin is that he is a character who has done great wrong in his past, yet he does not seek redemption, he doesn’t believe he deserves forgiveness, he just dedicates himself to protecting others. The film teases whether or not Kenshin will give in and kill again and his final decision in the film’s climax is simply glorious and something to savour. Kenshin is an incredibly admirable character and his band of comrades are just as admirable. They say judge the masses by the man they follow and that man is Himura Kenshin.

Now I am certain what most of the anime and manga fans want to know is how good an adaptation this film is, well I must say it is an excellent one. It adapts a mix of the first two story arcs of the series and does so with relative ease. So much happens in this film and it barely stops to take a breather. The tone is intense and rarely strays from that. It is paced well enough but truthfully could be a little shorter. Of course that is not going to be an issue to Kenshin fans who just won’t be able to get enough of this. This is as good as an adaptation gets and Studio Swan should be proud of it. 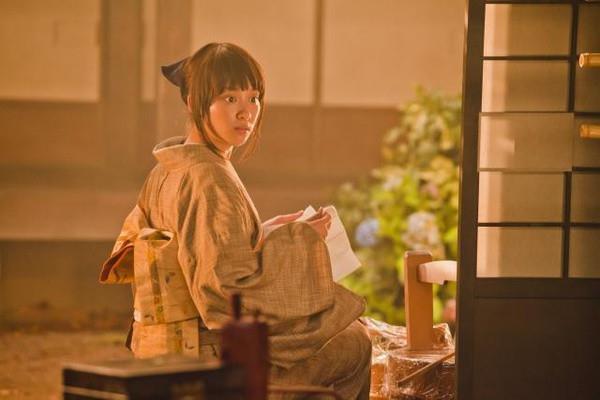 Visuals and Audio:
Aesthetically Rurouni Kenshin is utterly gorgeous. The set-pieces and scenery are awe-inspiring and tease at a world anyone with an adventurous side would love to explore. The costumes are well designed and are very highly detailed, making a perfect image of the original designs in the manga. Visually though it is hard to go past the stunning action sequences that is an utterly phenomenal achievement in film as a medium. I can still recall some of the incredible artistic feats on display in Rurouni Kenshin and I doubt they will leave my mind any time soon. 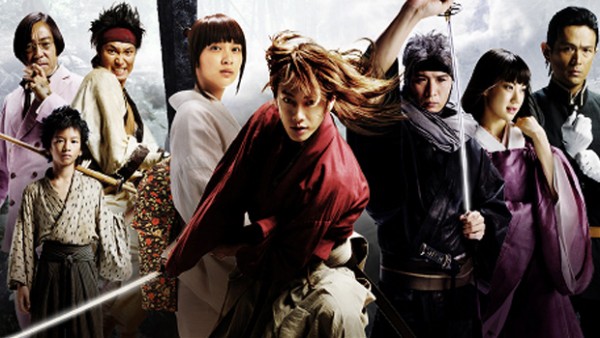 Overall:
It is hard to fault this film because it’s honestly a tour de force of fun and excitement that just won’t stop accelerating even when it hits a speed bump. Rurouni Kenshin is quite simply a love letter to it’s source material and beneath it’s flurry of clashing swords and occasional gunfire there is a warm  heart and honest soul that will resonate with audiences of all ages. This is an invigorating film in every sense of the term, one can only hope that this signals the revival of this beloved franchise.