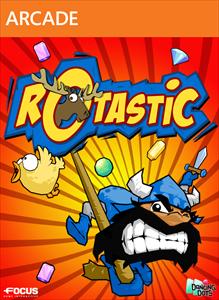 Overview
Offering more than rotations, Rotastic is a fun filled adventure that encompasses 7 different worlds that test your skills each and every step. Deadly traps and challenging objectives hinder your progress in your quest to collect the worldly gems. But is Rotastic the gem we are all looking for?

Gameplay
Simple mechanics provide the basis for the entire game. For both campaign and multiplayer, you may rotate around the closest hook by pressing (A). This simple control can be manipulated in many different fashions to provide bonuses to your score. For instance, making a figure 8 between two hooks will provide an additional bonus for creativity. 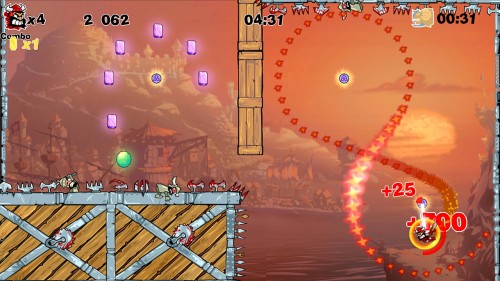 Additionally, you can change the direction of the rotation using the left and right bumpers. Using the bumpers becomes critical in levels that have traps or bosses that take up a majority of the screen.

The main objectives change in accordance with each level. Most levels require the player to collect all the gems in order to finish. As a light blue gate opens, the player must pass through it to complete the level. Completing the level quicker will add to the overall bonus and potentially rank you on the global leaderboards. However, some levels just require survival and are better known as boss stages. Giant machines, floating fish, and other obnoxious beings will deny you passage to the next level. While avoiding traps and giant fish, always remember to not fall. Falling beneath the screen will kill you unless the character is attached to a hook. You will receive bonuses for being that risky, but you cannot collect a bonus if you are dead. 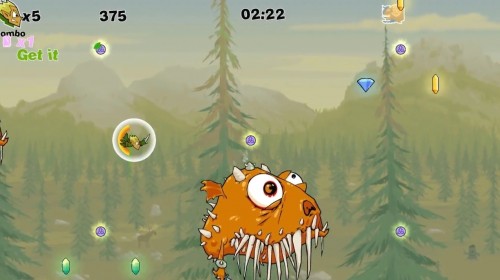 A player may attain helm trophies after each level completion. Bronze, silver, gold, and platinum helms are attainable and can be gained by performing unique acrobatics. A timely completion without losing a life adds sufficiently to the total score. Achieve a platinum helm to see how you rank globally.

Most video games utilize a health bar to add layers of difficulty. Unlike most games, Rotastic only provides a shield that can save a character from a collision with a spike or boss character. Hitting a spike after shield deactivation causes death – something I am very familiar with. Moving from one hook to another deactivates the shield and leaves the player vulnerable. Only by grabbing onto a hook for a small duration will the character regain protection. 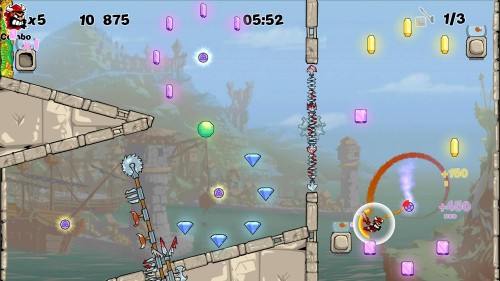 Now I would like to discuss the positives in Rotastic‘s multiplayer. Offering up to four players simultaneously, the available mini-games are exciting and fun. Item Collect is all about collecting enough gems before your opponents. By setting a collection limit, players will fight to the death to reach the required gems. 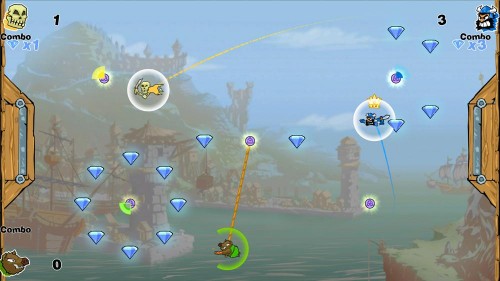 Deathmatch – on the other hand – provides a thrilling killing experience. By rotating closer to the hook, you are able to cut your opponents rope and potentially send them to their doom! Changing your rotation direction may prove advantageous, but doing so will leave you momentarily vulnerable. An opponent with a full shield will send you flying without proper protection.

The problem I foresee is not having an online feature other than a ranking leaderboard. While four players offline might be fun, you may not have the luxury of playing with three others. Granted the option for bots is available, but an online multiplayer option could improve Rotastic‘s fan basis and offer more playability.

Graphics/Audio
Presented in a 2D fashion, graphically the game is pretty. I would offer another word, but pretty is all I could muster up. A skirt wearing skeleton doing complex acrobatics on a screen trying to kill a sausage eating boar is amusing. And you better not cut that boar’s sausage! 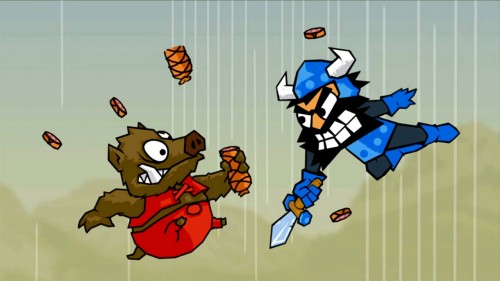 Mimicking the comical nature of the graphics, the audio presents itself in a cartoonish manner. Whether you are falling to your death or on a collision course with a chicken, the game offers funny sounds to keep your enjoyment. No collision is left untouched without audio!

Overall
Delivering an easy to learn gameplay, Rotastic may find itself gaining a wider fan base. The simple mechanics of rotating from hooks is fun and can be manipulated into larger combinations that offer huge bonuses. The leaderboards determine how a player is ranked globally and is available to see after each platinum completed level.

Being an arcade game, I thought Rotastic would have online multiplayer as its most prominent feature. This assumption was not fulfilled. What I was left with was not nearly sufficient, but an offline multiplayer will have to make do.

Rotastic has a great adventure mode that offers you unique objectives and that challenges your skills with nearly 70 levels. Competing to acquire the highest rank in campaign will be the game’s re-playable quality. By providing cartoonish and amusing assets, Dancing Dots created a fun title that anyone can enjoy.

Rotastic rotates towards you with