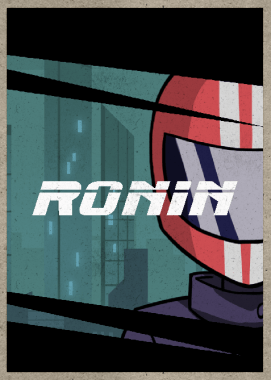 RONIN is a stylish platformer with a twist. Players can stop time at will to plan a difficult maneuver and combat is completely turn based. The game may be the closest thing to a Kill Bill video game you may ever get.

The heroine of RONIN is blazing a path of vengeance to kill five leaders of a shadowy company that betrayed her father. The story is told through a couple of sentences shown before each boss battle explaining the relationship between her father and the target. It is hard to tell a deep story with only a few paragraphs for an entire game, but it is enough to give RONIN some good background. 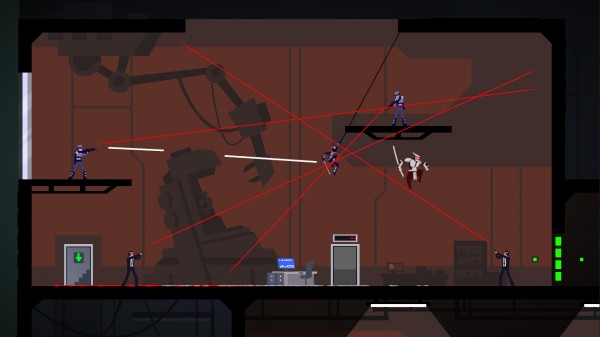 RONIN’s gameplay breaks down into two stages, combat and movement. Movement is played like any other stealth platformer, but players are able to hit the pause button to help them out a particularly challenging movement or to give themselves time to plan. Although foot movement is managed by the traditional direction keys, jumping works a little more like Angry Birds than Castlevania. The player pre-plan their jump with a handy arc, then fling themselves in the desired direction. In the air, the player can use a grappling hook to swing or reel themselves into hard to reach places.

Once combat is initiated, the game switches to a turn-based system. Each second in the game serves as one turn. Each turn, all characters on the screen will be able to execute one action. Players need to take great care, as any single hit will kill the heroine. Once the player chooses their move, the heroine will execute her move, followed by all the NPCs. The jump arc changes a little to display how far the heroine will travel in a single turn. Sometimes a medium sized jump will accidentally hide the fact it will be a two turn jump, which often leads to very sticky situations. I think an easy fix to this problem would be to change the white bar to a different colour when a jump will take multiple turns. 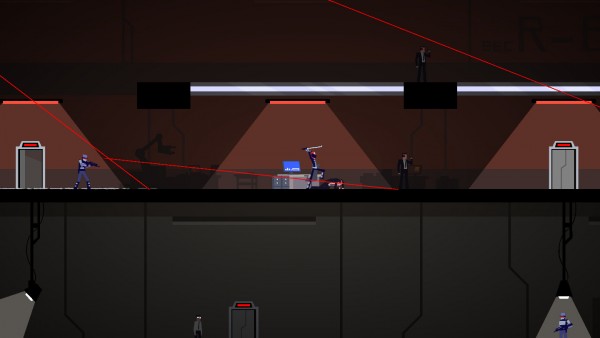 The game starts with a single type of guard packing a handgun and quickly introduces new enemies from there. The initial tutorial leaves players with just the bare basics. Figuring out new enemy’s abilities boils down to a trial and error. This is particularily frustrating during the first new special enemy, the red samurais.

Combat is enjoyable. Like chess, RONIN’s combat system requires players to think several moves ahead There’s something really satisfying about strategically jumping around, waiting for that perfect time to strike through multiple enemies in a couple of turns. 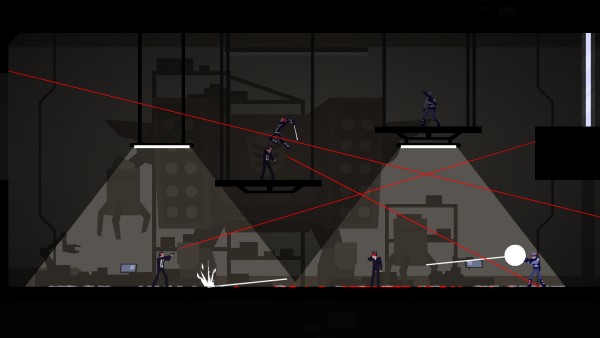 The game can be played with either a mouse and keyboard or a controller. Both work well, so it will most likely boil down on personal preference. The real challenge with RONIN’s controls is the preview lines for combat and jumps. Though the developer slipped in a hint that reminds players that “the jump arc is a lie,” the actual hitboxes feel like a crap shoot at times. I cannot count how many times I encountered moments where bullets will hit at the heroine’s feet harmlessly that would normally kill her or managed to get shot after moving what seemed to be underneath the firing line.

There are 15 levels in the game composed of two levels followed by a final boss. To progress through the game’s skill tree the player needs to accomplish not set off any alarms, kill all enemies, and not harm any civilians in one playthrough to get the skill point. The skills are an absolute must, as they make later levels easier. This results in a frustrating and annoying conundrum. Levels have only one or two ways to be completed to get all the bonus objectives and combat is unforgiving to errors. To beat the more challenging levels with all bonus objectives, you need those skills, so there is little reason to continue without clearing the previous level perfectly. It would have been a better idea to allow the three bonus objectives to be completed over multiple playthroughs. I never realized how much fun was sucked out of the game until the final level of the game where I was finally free to play the game however I wanted to. That final level was a breath of fresh air that I had been looking for while I suffocated in the most awful limbo of “load last checkpoint” as while I tried to figure out the best way to beat these levels. I finally could bounce around like an idiot and play out my Kill Bill fantasy to my hearts content. 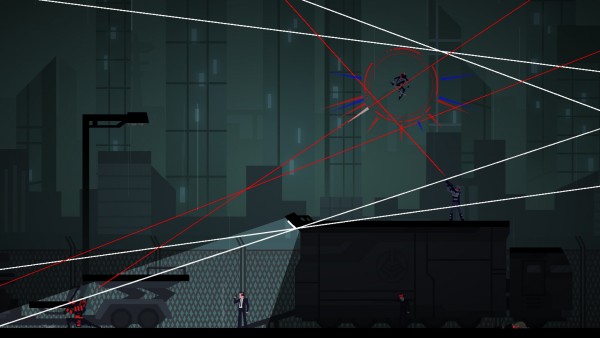 Once the game is beaten, players are free to start a New Game Plus. Players start the game from the beginning with all skills, but the levels have their enemy layouts redesigned. Now, all enemy types will appear from the start and players will face off against more opposition. On the flip side, there’s no need to worry about completing every bonus objective.

The level design is a mixed bag. On one hand, the need to completely all bonus objectives really stifle the freedom of choice. On the other hand, there are some genuinely smart puzzles and heart racing moments in the game. My biggest wish was that the elevators moved faster. There are some painfully long elevator rides that really break up the pace of the game.

RONIN focuses on simple colours with little shading and a muted palette. RONIN could easily be mistaken for a Saturday morning cartoon. The visual design is so striking, that I often forgot how simple the art style is. Tomasz Wacławek manages to make it feel more than the sum of its parts. Its simplicity doesn’t stop the game from being incredibly bloody. Driving a sword into an unsuspecting guard will spew blood across the room, much like a Japanese anime. 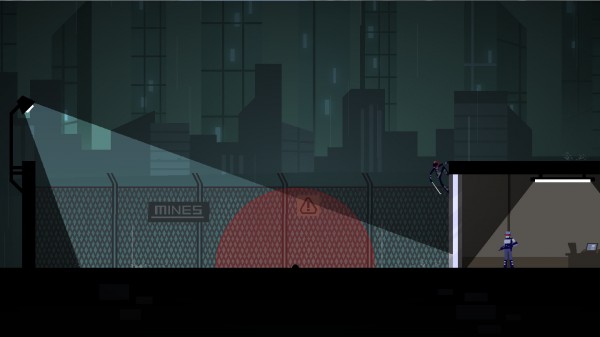 The graphical options are pretty limited. The only performance related option is to disable anti-aliasing and V-sync. The game can be played in windowed mode, but there is no option to change the resolution. Yet there is support for Dell XPS LightFX, which makes me feel like the priorities are a little misplaced.

The sound effects are excellent, though they aren’t anything special. The real draw is RONIN’s fantastic soundtrack. It fits the game well and is an absolute pleasure to listen to for the first 20 minutes of the game. Considering how often I needed to go reload checkpoints and replay levels, I soon found myself getting bored as each level plays a single song over and over.

RONIN has everything it needs to be an amazing game that only an indie developer could release. The chess-like combat is extremely fulfilling. The art style and plot channels Tarantino’s Kill Bill in all the right ways. Its mix of turn-based combat and platforming is a brilliant idea that is a pleasure to play when all the pieces fall in the right spots. Unfortunately, the game is hampered with some really poor design decisions that makes the game feel repetitive and arbitrary.