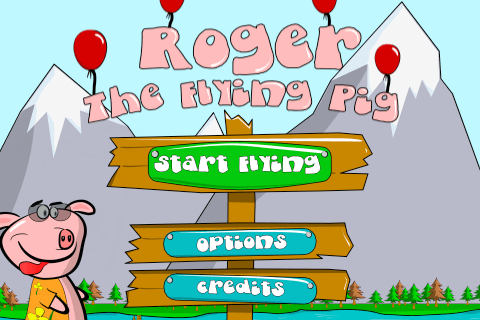 Introducing the first game from one-man game design company, MagiCode Games, Roger the Flying Pig. In this game, Roger the pig has the somewhat delusional dream of being able to fly. In an attempt to do so, he puts on his best red cape, scoffs down some hamburgers and makes his way to the local enormous ramp to luge at terrific speeds, catapulting himself into the air before tragically plummeting back down to earth. 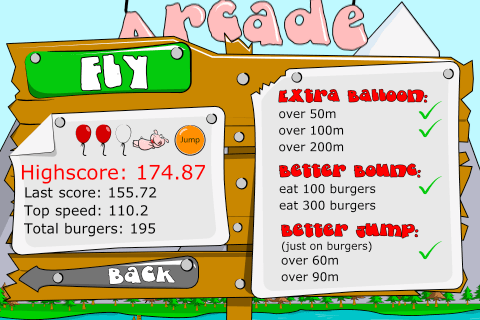 Before flying off into the different modes of play offered in Roger the Flying Pig, it’s probably a good idea to give a basic overview of the gameplay as a whole. Firstly, Roger is a pig. The problem with pigs is that they tend to not be able to fly. In an attempt to fly, Roger has climbed to the top of a giant ramp with such an impressive incline that he’s bound to become airborne. After pressing jump, Roger leaps forward onto the ramp, building up speed before his final big jump into the air. In order to build up speed, you need to pop balloons floating about the ramp, that hold up hamburgers (sometimes other food) which when eaten will boost Rogers speed. Unfortunately for Roger, he eventually hits the ground. This part of the game demonstrates an impressive use of physics, where Roger hits the ground, bounces and spins in the air before making his final stop. 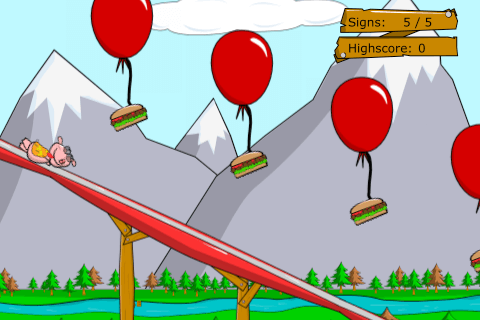 There are four modes of play for you to help Roger achieve his dream of flying. The first mode is arcade, where the goal is to help Roger fly the furthest possible distance. Within this part of the game there are a few different achievements to earn based on distance and burgers eaten. The next three modes of gaming are all challenge based, with the option to unlock levels as you progress. The first is distance. While on first glance this might seem to be the same as the arcade version of Roger the Flying Pig, this mode is a little more difficult. The goal here isn’t to go the furthest distance possible, but rather to get as close to a certain distance, marked with a sign, as possible. The next type of challenge is even more difficult than this, where you need to collect a certain number of apples. Sometimes the apples are hanging from balloons, other times the apples are floating in the air. It takes a few attempts to try and get the speed and timing right before you can manage to collect enough apples to even gain two stars. This part of the game I’d say is a little too difficult. Fortunately, the last mode is a little simpler to master. This last game mode involves avoiding strategically placed signs by timing the speed of your jump perfectly. There is another little handy boost in this part of the game in the form of cupcakes. Eating a cupcake will give you a bonus jump to use in order to try and avoid those annoying signs. Overall, the challenge-based games are fairly difficult, which makes conquering them all the more satisfying. Although this may not actually happen as I’ve found out the hard way. 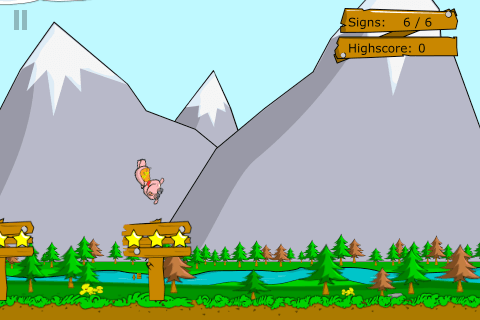 The graphics aren’t all too spectacular. There is a cartoon like quality to Roger, and all the scenery and objects fit with this design. The design is all done in a slightly whacky fashion, which is fitting to the theme of a pig flying. While it has its charm, it isn’t all that visually spectacular. I will note however that the animation of the trees moving by as Roger flies past is fairly impressive and offers an almost hypnotic effect. The audio is much the same as the graphics, somewhat whacky and fitting to the theme, but not all that noteworthy. 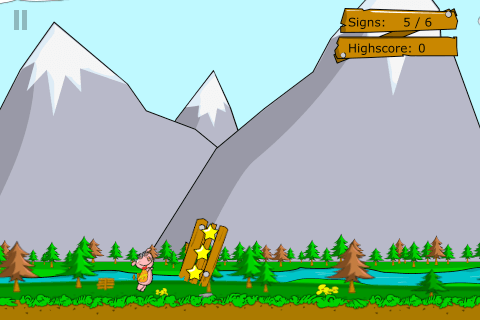 Thematically, Roger the Flying Pig has potential. While I’ve enjoyed watching the impossible feat of a pig flying, the mechanics of the game fall a little short. Some of the levels are a little difficult to master, such as the collection of apples whilst flying. The physics of the game is well constructed, but sadly, apart from bouncing off the ground, this doesn’t really impact too much on gameplay. For a first time effort at designing a game, and taking into consideration that one person designed the whole game, there is potential in Roger the Flying Pig.