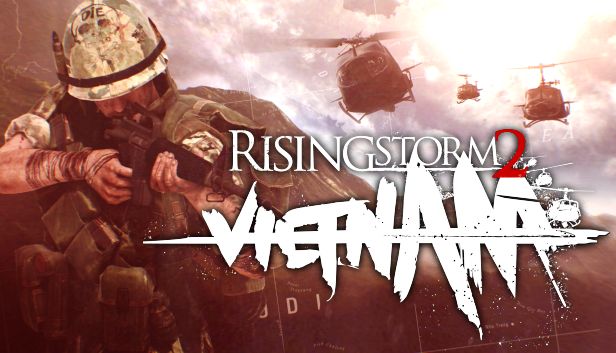 There is no story mode or story campaign to speak of in Rising Storm 2: Vietnam, but there is a bit of banter between soldiers in-game. The lines are a bit of a mixed bag. Some are good and contribute to the feeling of being in a film like We Were Soldiers, while others are just downright bad in a cheesy B movie sort of way. 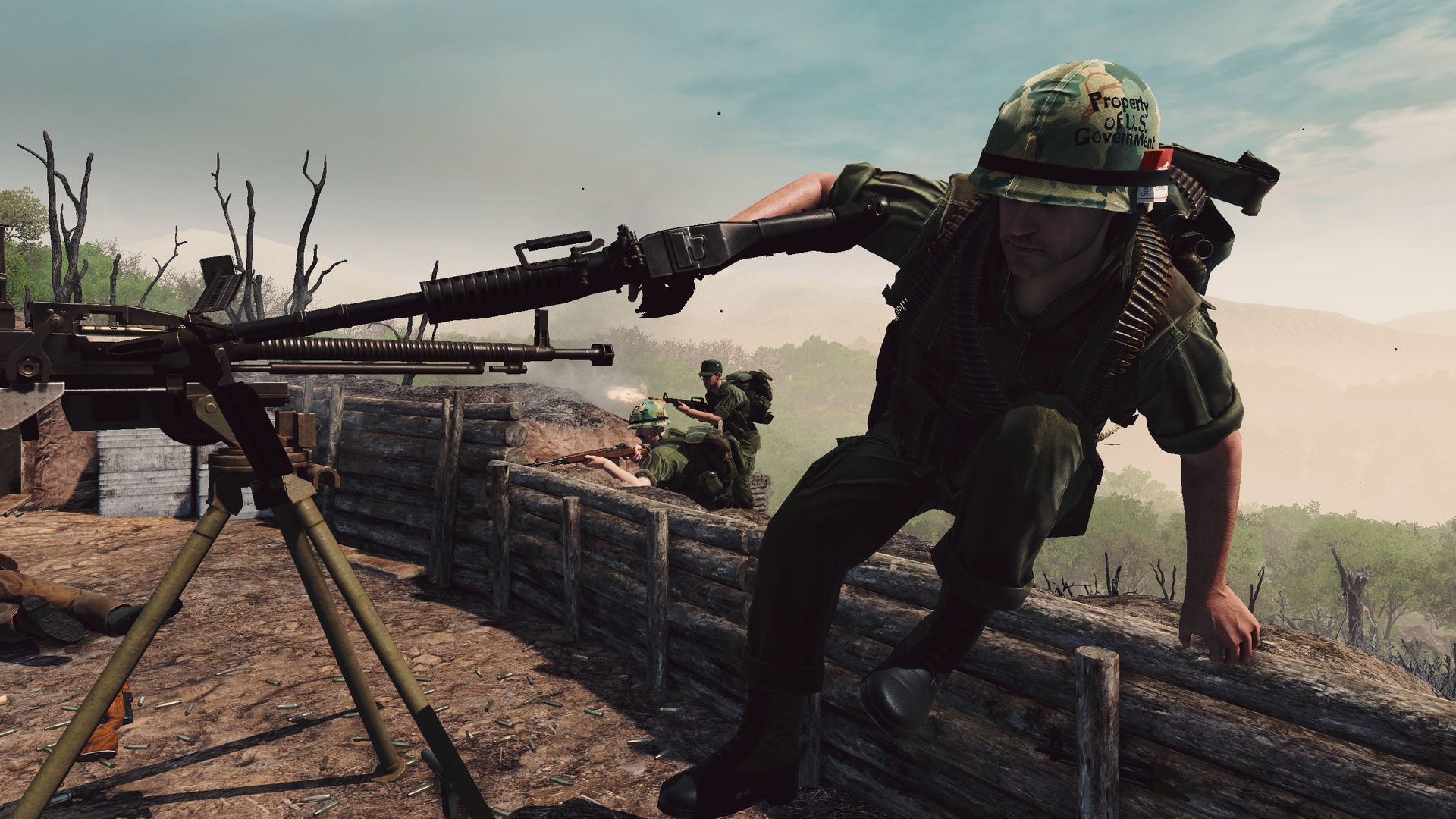 Rising Storm 2: Vietnam is a realistic FPS that stops just short of being a full-blown military simulator. The game’s main focus is on infantry combat, but the game also supports transport and combat helicopters on certain maps. The controls are a little more granular than the standard FPS controls. Players are able to lean left and right to get a better shooting angle, opt to throw grenades either over or underhand, adjust their rifle’s stock, and attach a bayonet. Currently, there is no native support for controllers or joysticks, so helicopters can only be controlled using a mouse and keyboard or some sort of emulated solution like the Steam Controller. Piloting using mouse and keyboard works well enough, but it is still inferior to an actual analog joystick of some sort. 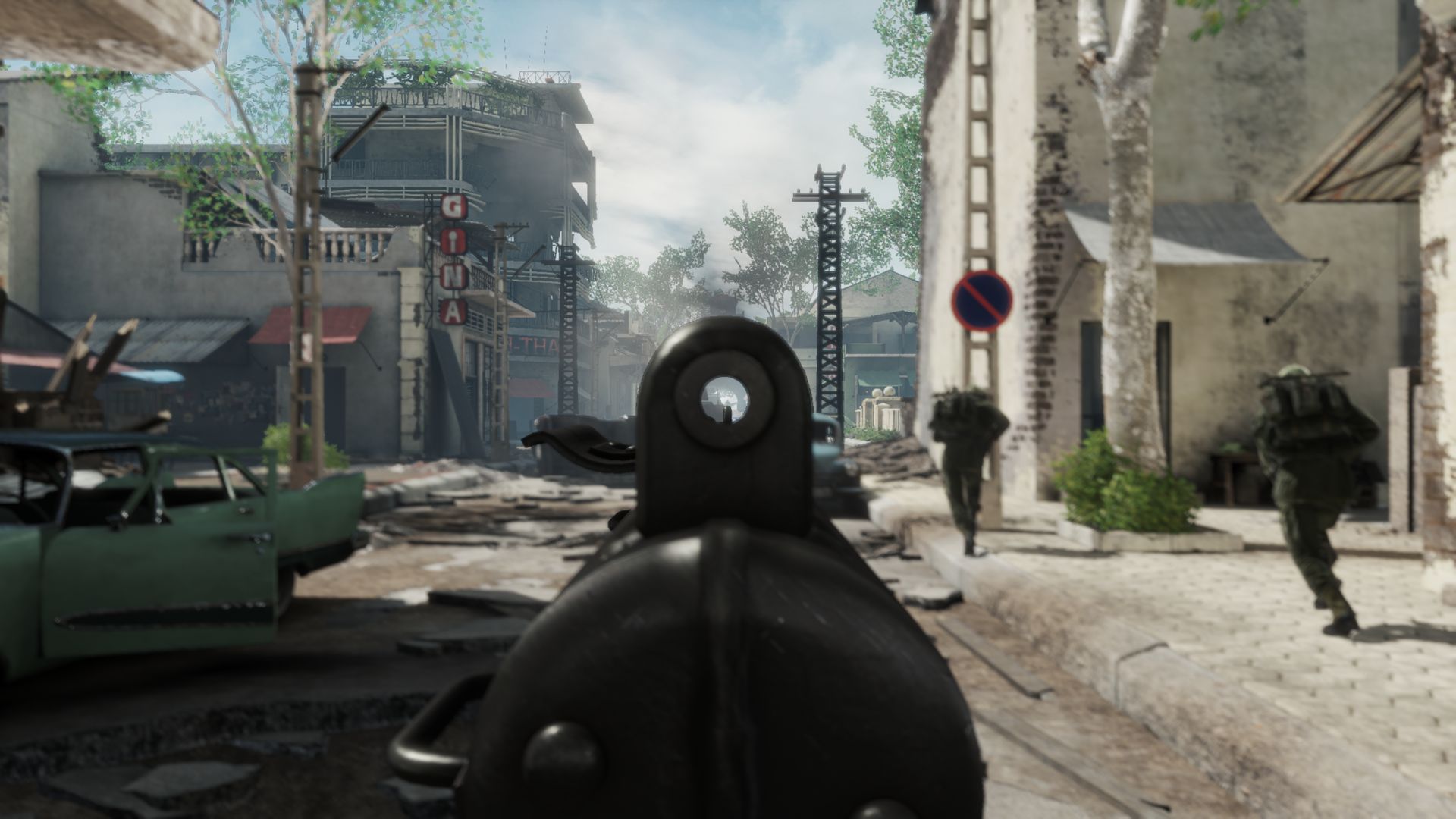 The realism in Rising Storm 2: Vietnam makes for a difficult game to learn. A bullet or two is easily enough to kill a person. Cover is an absolute must, but bullets that land nearby still cause a suppression effect that emulates the sheer terror of trying to not die. The effect causes the screen to blur, making it difficult to spot enemies and lowers the overall accuracy of the player’s weapon. Tripwire Interactive lives up to their reputation of delivering games with incredibly accurate firearms. Players can only see how many magazines are in their inventory. Players can get a rough estimate of how full their magazine is by holding down the reload button to either pull back on the bolt or take out the magazine. The only way to know exactly how many rounds are left is to count, and players will soon discover that is just not realistic. Reloading a half empty magazine will either trigger a lengthy partial reload or stash the magazine at the end of the player’s magazine queue depending on the weapon. Combined with the high damage bullets, running low on ammunition becomes a terrifying situation in Rising Storm 2. Correctly deciding if and when to reload in between battles is a huge challenge as hearing the click click click of an empty rifle while pinned down will make one’s stomach plummet to the ground.

Rising Storm 2: Vietnam has one of the best systems for handling firearms rested on a surface, with or without a bipod. When near a corner or a surface that a weapon can be rested on, a small icon pops up to notify players that a shouldered weapon will have no sway due its supported position. A firearm with a bipod will have a similar effect when rested against a surface, but will also have no recoil. If the ledge is slightly higher than the crouched player, then it will automatically raise the player’s height to the ledge when the weapon is shouldered. I like the fact that the system tends to error on the side of caution, allowing players to rest their weapons on more surfaces beyond the standard window sill or sandbag wall. 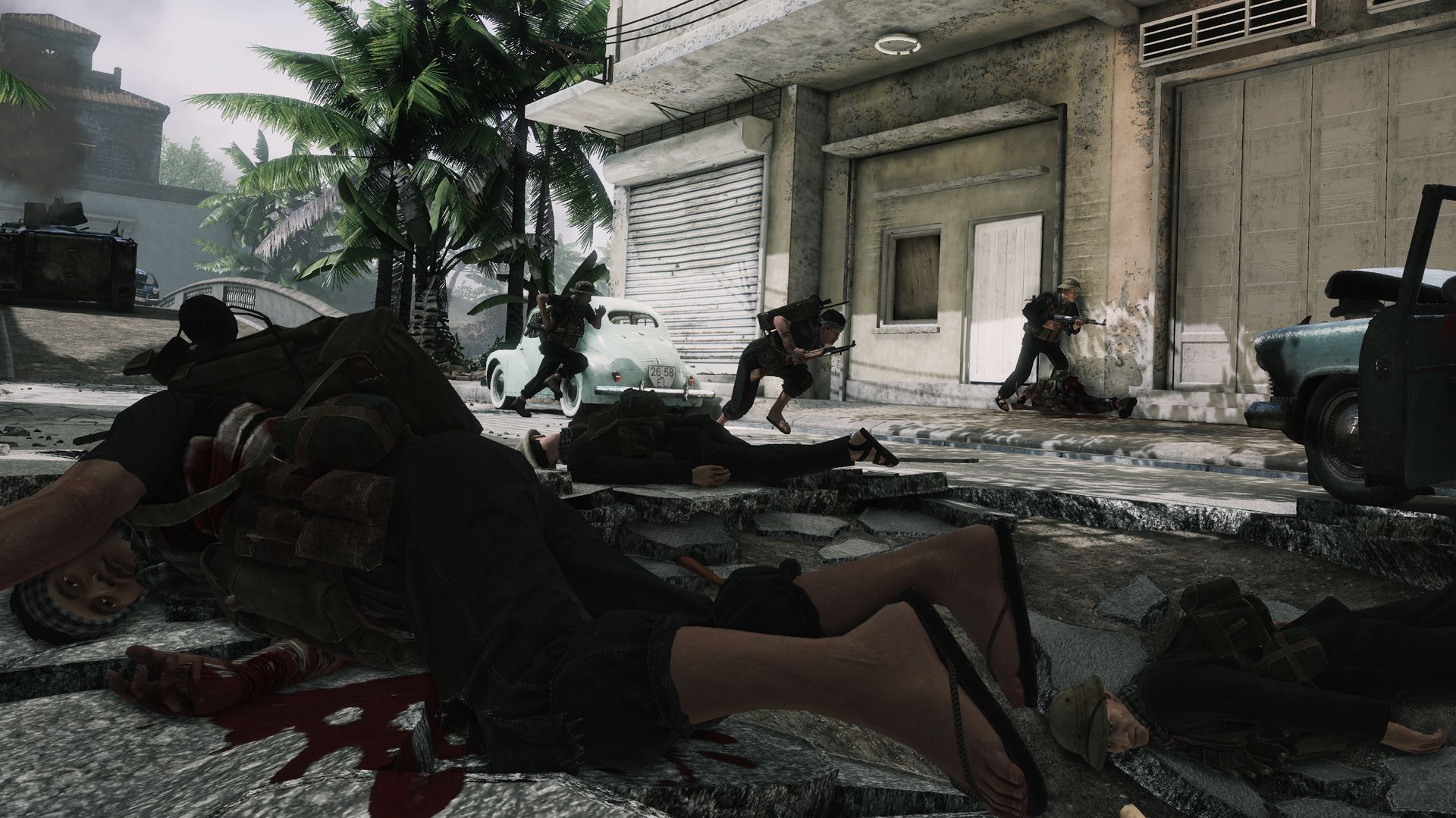 Rising Storm 2: Vietnam is a fantastic FPS if players are willing to tough through a difficult learning curve and find a good community. Bad decisions like running out of cover without a smokescreen or poking out to fire from the same place over and over will be punished quickly. Friendly fire is almost universally enabled and the friendly GUI icon takes a split second to appear, so learning to identify each army’s uniform and silhouette at a glance is vital for surviving the game’s short and brutish firefights. The tutorials are a bit on the thin side. There are a series of YouTube videos that break down the game’s basics and some sandbox maps that let players stretch their legs and practice. Finding a good community is part of the challenge. Given the team-based nature of the game, an army that has members communicating and coordinating each other will obliterate an army that doesn’t with absolute ease. While a microphone isn’t 100% required in this game, it makes a huge difference. 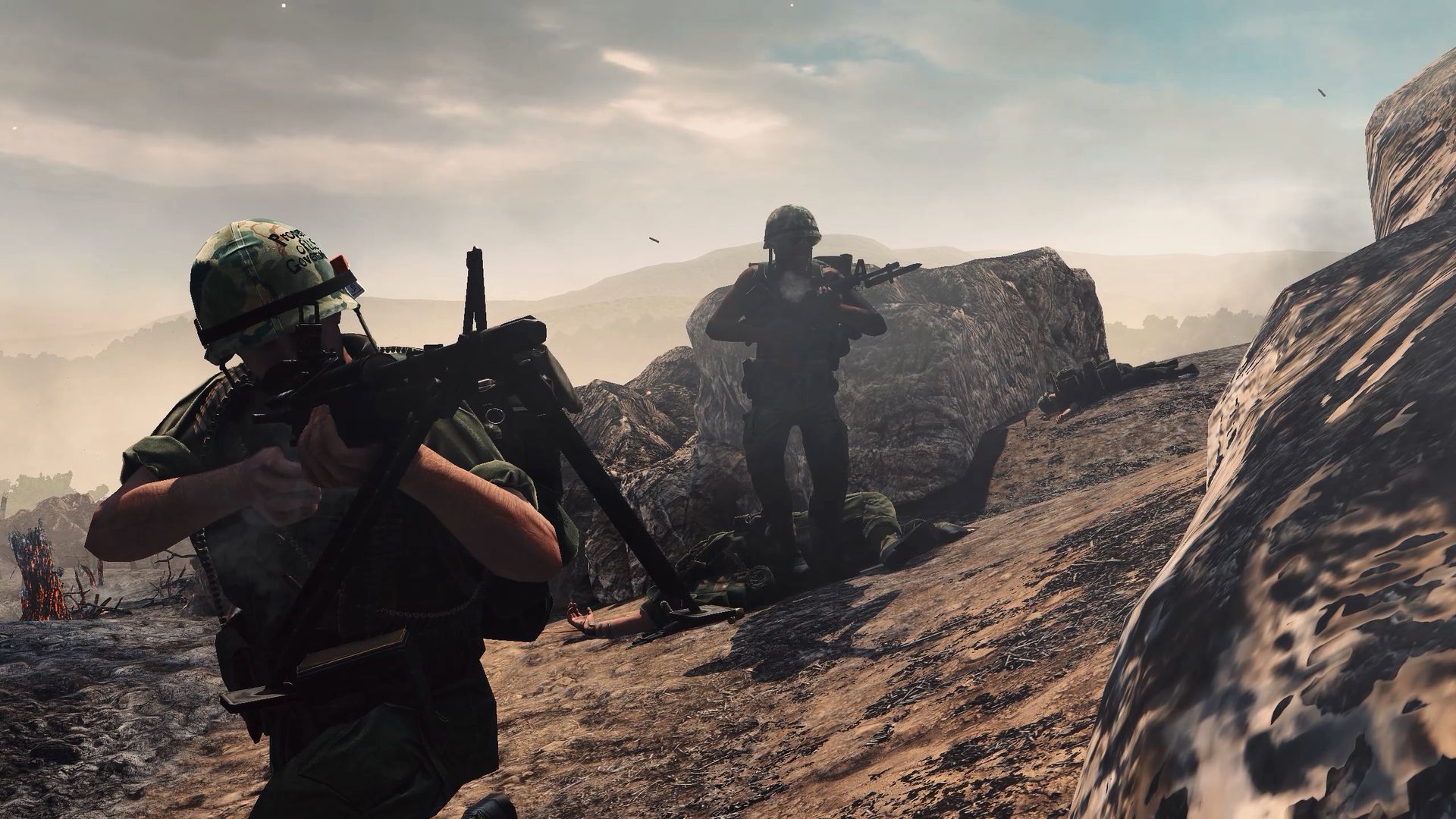 Combat in Rising Storm 2 tends to focus on static battle lines in 64 player servers. Territories mode has one team on attack and one on defense, and Supremacy is a tug of war-like battle for control points. The maps usually have multiple routes with flanking options a bit limited by the lower number of available capture points. Here, Rising Storm 2’s asymmetrical design is at its most obvious. Both armies can respawn troops in their backlines, forcing players to walk their way back to reinforce the front lines. The US military players can also opt to respawn directly on their squad leader or get shuttled up to the front by a transport helicopter. The more direct nature of the US respawns puts a lot of firepower on the front lines and encourages a little more conservative play from its squad leaders. On the other hand, the northern Vietnamese squad leaders can lay tunnel exits on the map, creating a static spawn point for the entire squad until the exit is found and destroyed by the US troops. When combined with the North Vietnamese’s commander ability Ho Chi Minh Trail that shortens respawn times, a few sneaky squad leaders can create a sudden surge of troops on an weakly guarded US flank. In the greater picture, the differences between the two teams of Rising Storm 2 is not as obvious as say Left 4 Dead, but it is still enough to add an interesting twist on an FPS genre that tends to error on the side of uniformity. 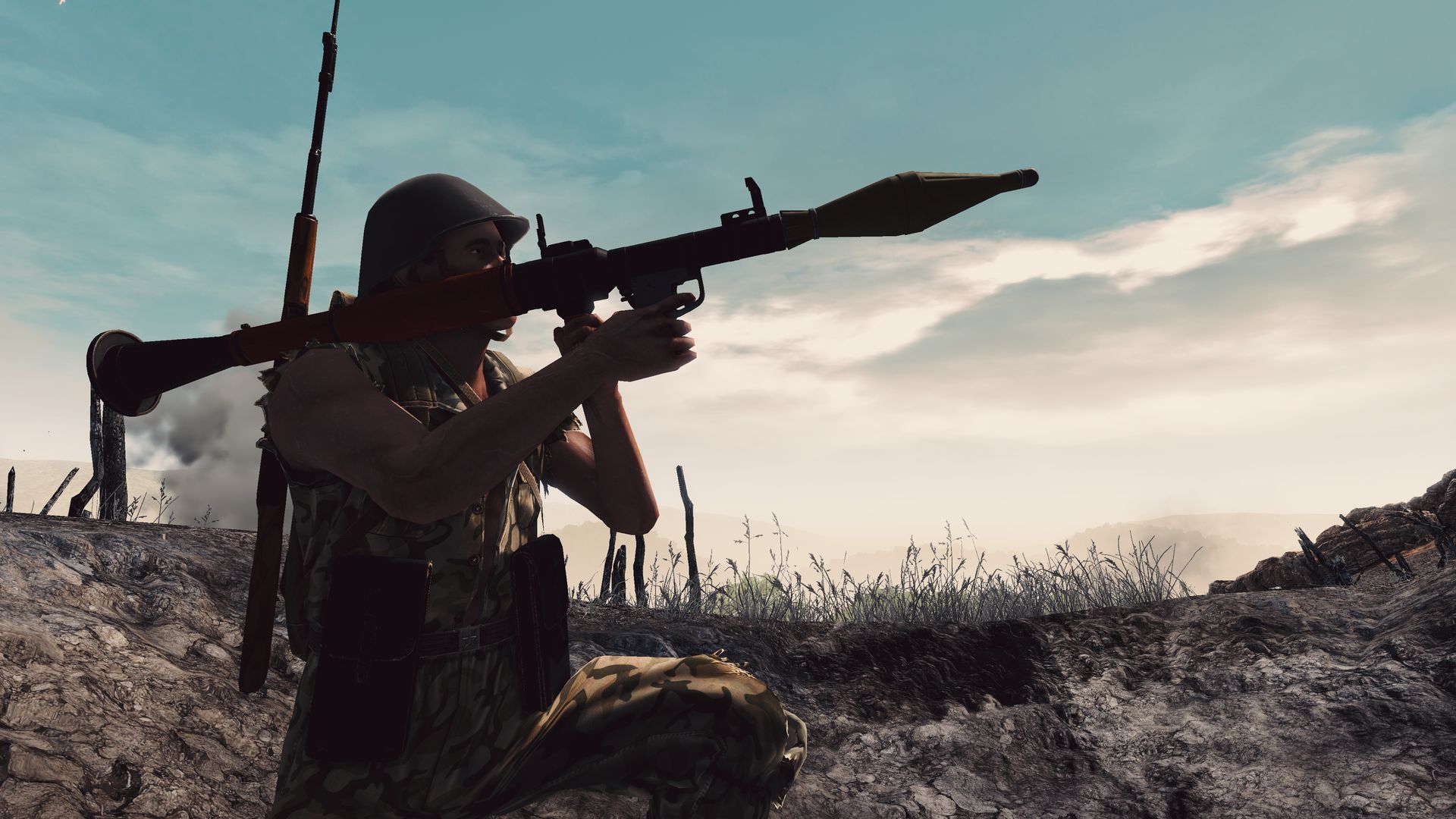 Rising Storm 2: Vietnam looks excellent, with well detailed models and solid animations. The default HUD is minimalistic, with important icons only appearing when necessary. A more detailed HUD called the tactical view can be toggled on. Rising Storm 2’s progression system is strictly cosmetic and offers a vast array of customization options to create a unique look. The maps do an excellent job of recreating the sites of legendary battles during the war.

On the technical side, the game is built on Unreal Engine 3, the same engine Tripwire Interactive used for their previous games. Rising Storm 2 is definitely on the higher end of the spectrum when it comes graphical options available for tweaking. In my testing, I did not run into any serious frame rate issues or graphical issues.

The audio experience in Rising Storm 2: Vietnam is generally very good. The soundtrack has a wonderful mix of Vietnamese and American music from the era that plays a huge role in creating the Vietnam War environment. My only wish was that the developers were able to put in more licensed tracks in the game. The sound effects are fantastic. It seems like the developers put just as much effort in creating authentic sound effects for the gunfire as they did with the actual handling of the weapons. The weakest part of the game’s audio experience is the voice acting. Although the main announcers were done by competent voice actors, some of the random filler lines spoken by in-game characters are really poorly acted and break the game’s immersive feel. 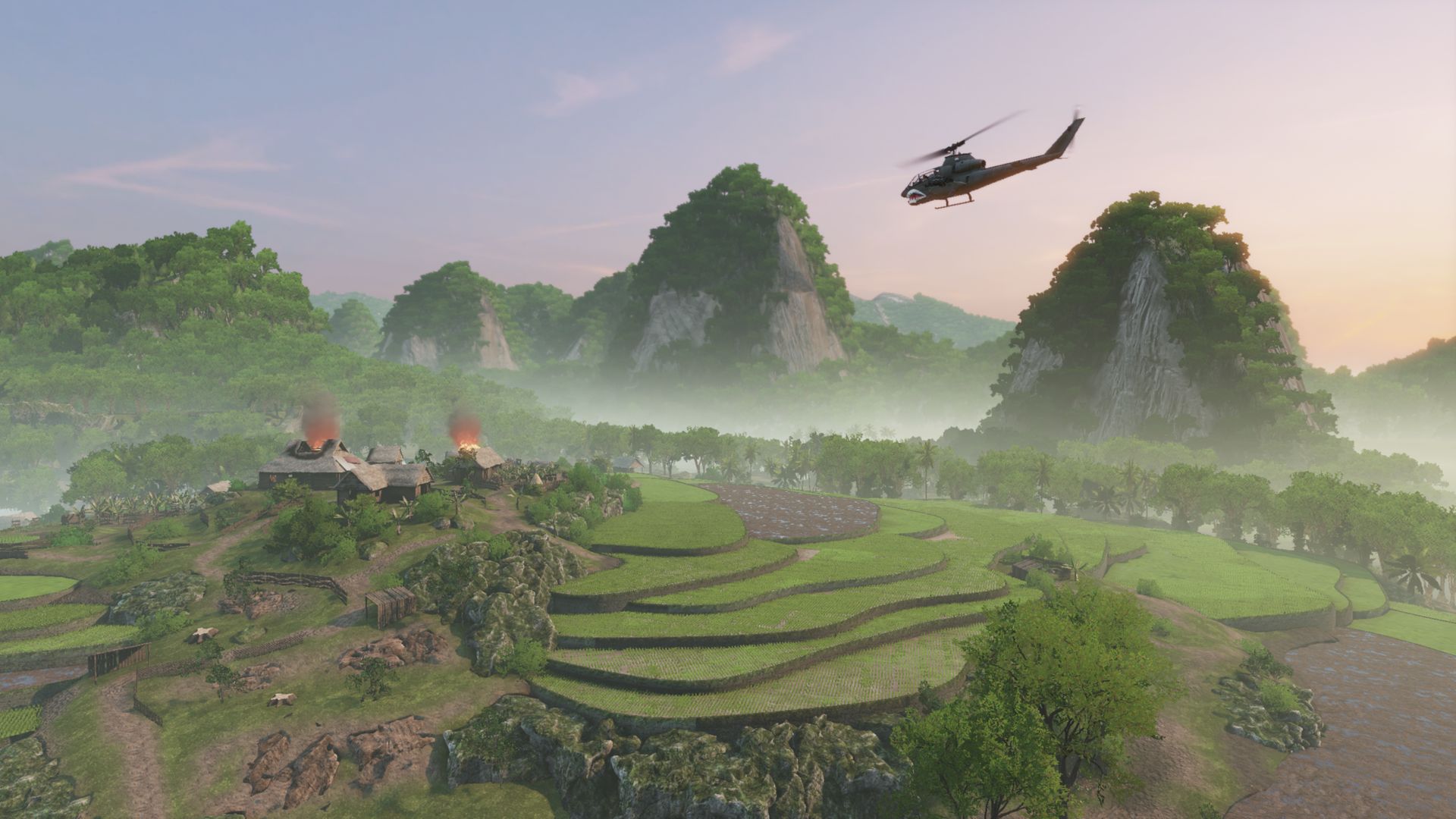 Rising Storm 2: Vietnam is not for everyone. The game boasts strong controls, graphics, and audio, but the realistic gameplay leads to a high learning curve that will chase away a lot of gamers who are looking for a pick up and play FPS experience. Players will also need to put in the effort to find a community of teamplay oriented gamers who are interested in using voice communication to really get the most out of the game. Anyone who is willing to put in the effort will be rewarded with a fantastic FPS that provides an intense, large scale infantry combat experience.

Don’t be scared off by the high learning curve, Rising Storm 2: Vietnam is a fantastic FPS for fans of realistic shooters at an affordable price.
8.5