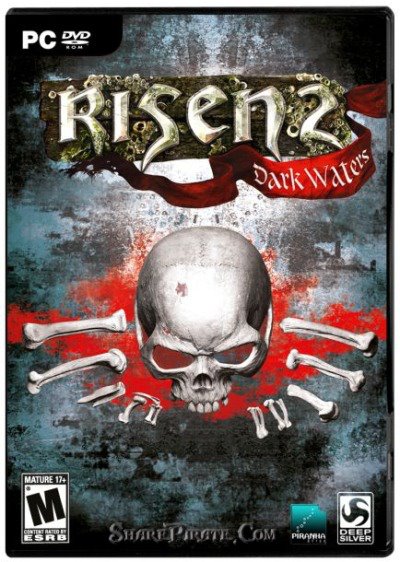 Yarr it’s a pirate RPG! The follow up to 2009’s Risen, this single player swashbuckler is brought to you by the developers of Gothic, this time developed simultaneously for PC, PlayStation 3 and Xbox 360. The first game was banned in Australia due to the way it handled alcohol, and both it and the sequel feature lots of booze, swearing and general skulduggery.

Risen 2 takes up pretty much where the first game left off. You needn’t worry if you haven’t played the first game – there’s little here that will confuse you. In a world being destroyed by Titans under the control of the titan lord Mara, the Nameless Hero is drinking his days away working for the Inquisition. He is called upon to track down a legendary weapon that will put an end to the war, and is drawn into a search for not one but four artifacts that hold the key to bringing down Mara and her titans. 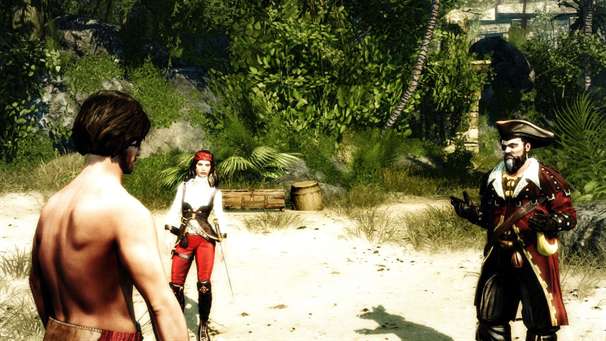 Players must travel amongst the islands that make up the world, interacting with pirates, inquisition soldiers and natives to try and track down the artifacts being held by the four remaining pirate captains. Along the way some companions join you for the ride, and they are a mixed bag of irritating, one note or mildly entertaining characters. Patty (returning from the first game)is an obvious attempt at a strong female character that instead gets annoying very quickly (just because I’m a woman, it doesn’t mean I can’t kick your arse!’ she yells repeatedly), whereas Jaffa the gnome somehow manages to stay on the right side of the irritant line with his pirate learned English (‘fuck yes!’). Don’t expect any deep characterization or intriguing relationships though, Risen 2 is pretty much a one man show.

And it is the main character that keeps the voyage thriving. The Nameless Hero by being predefined has a lot more room for being obnoxious, rude, witty and entertaining. He’s likeable, funny, and more often than not also giving voice to the slightly sarcastic thoughts that are popping up in your own head as you play. He reflects the tone of the game, the pirate soul if we’re being cheesy. Where other ‘medieval’ style RPG’s tend to the glum and serious side, Risen isn’t afraid of being human.

The plot has some interesting turns to it but also its moments of predictability. The game for the most part is a bit nudge nudge wink wink about it, but sometimes the contrivances of the story seem a little too much, with obvious and logical solutions simply not on the table. It’s not a story that’s going to stick in your mind by any means, but it does the job and is saved by having a sense of humor, which could also be said of the game as a whole.

Gameplay in Risen 2 is a rather land based affair. You won’t be sailing any ships or even swimming, because for some odd reason, this pirate doesn’t like water. Gameplay is instead focused on exploring a handful of islands that are gradually unlocked by progressing in the plot, each fairly small and without loading times.

The main quest sees the Nameless Hero tracking down the four legendary artifacts that will destroy the evil Titan Lord Mara. Along the way he must join a pirate crew, defeat various mutated beasties and collect various items for all and sundry. There are a good smattering of side quests to complement the main story, and you can wander the jungles as you will to kill off the incredibly vicious local wildlife. Tribal temples, settlements and other random structures bring some variety and a good sense of exploration, even if the islands are too small to get lost in. There are treasure chests to be dug up and unlocked, gold to be mined and plants to be gathered, and with a bottomless inventory there’s no limit to the swag you can carry. 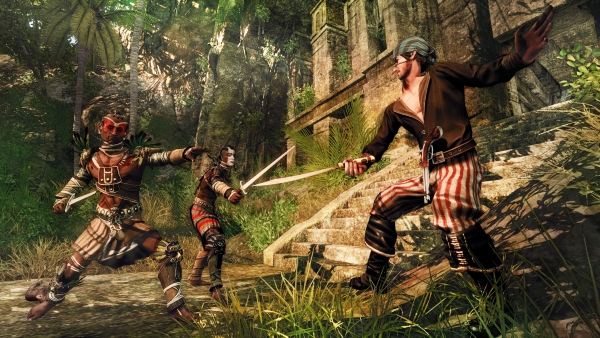 Doing anything at all will net you glory points, which can then be used to level up the Nameless Hero’s skills. At the beginning of the game you don’t have a whole lot going for yourself, so careful placement of these points is essential. High skill levels open up more talents to be used, which as well as demanding a certain skill level also require substantial gold to be paid to a trainer NPC. The skill trees allow development in swordplay, voodoo, gunplay, toughness and cunning, allowing for some customisation of the Nameless Hero. The whole set up demands thought from the player and makes every new talent one that is truly earned – you won’t be idly chucking away experience in this game.

Cunning allows you to pick locks, steal from NPC’s and make use of your silver tongue, an invaluable skill that can make life a lot easier when it comes to completing quests. Of course there are multiple ways to tick off some objectives, so if you can’t quite talk your way out of a situation then you can always draw your blade or your pistol.

The combat is unfortunately where Risen 2 falls a bit flat. Things are very repetitive at low skill levels, with not much to do but spam the attack button. There is some depth to the combat system, but you’ll have to power up to higher levels to alleviate the boredom. Counter attacks and parrying can be unlocked, each requiring precise timing and quite a bit of practice to pull off consistently – Dark Waters is not an easy game. 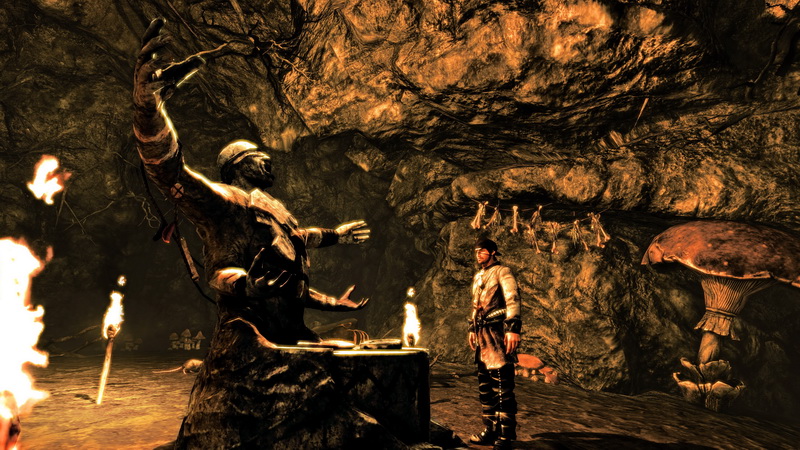 Hand in hand with that legitimate difficulty comes a little frustrating dollop of unfair. Enemy attacks cannot be interrupted, and if you happen to be fighting a wild animal say goodbye to any hope of blocking at all. There is also no targeting system whatsoever, making group fights a bit of a pot luck nightmare. Blocking one sword does not block them all, which would be perfectly acceptable if there was any remotely smooth way to change targets. The camera can also kill your chances, moving it to better see your enemy can often leave the Nameless Hero swiping at empty air. As a combat system it certainly takes some getting used to, and even when you get the hang of all the ‘quirks’ it still doesn’t make for fun confrontations.

Your companions in this grand adventure are also a bit hit and miss in their usefulness. Each has a special ability in addition to their standard attack, but you have no control over them whatsoever. You can get yourself out of tricky situations by allowing them to take the heat, but there will be times when they just stand there, watching you get the crap kicked out of you by a giant spider. Thanks Patty.

Putting all that aside, generally speaking Risen 2 is a pleasant experience. The difficulty level (when it’s playing fair) will please RPG fans sick of coasting through games, and the fairly unique character of the game makes a great change from the usual grim medieval or slick sci-fi set ups of modern RPGs.

There were a few concerns with Risen 2’s visuals and audio when the game was previewed,  and although there has been some improvement, much of the problems still exist. Objects still pop in at close distances, the draw distance is minimal, character lip syncing probably just never happened, the animations are bizarre and reminiscent of something from the Sims 2 at times. Water is strangely absent from this pirate game, given that you can’t swim and walking through it produces no discernible difference from walking on land. The list of niggles could be a long one indeed, but what it comes down to is this: Risen 2 feels old. 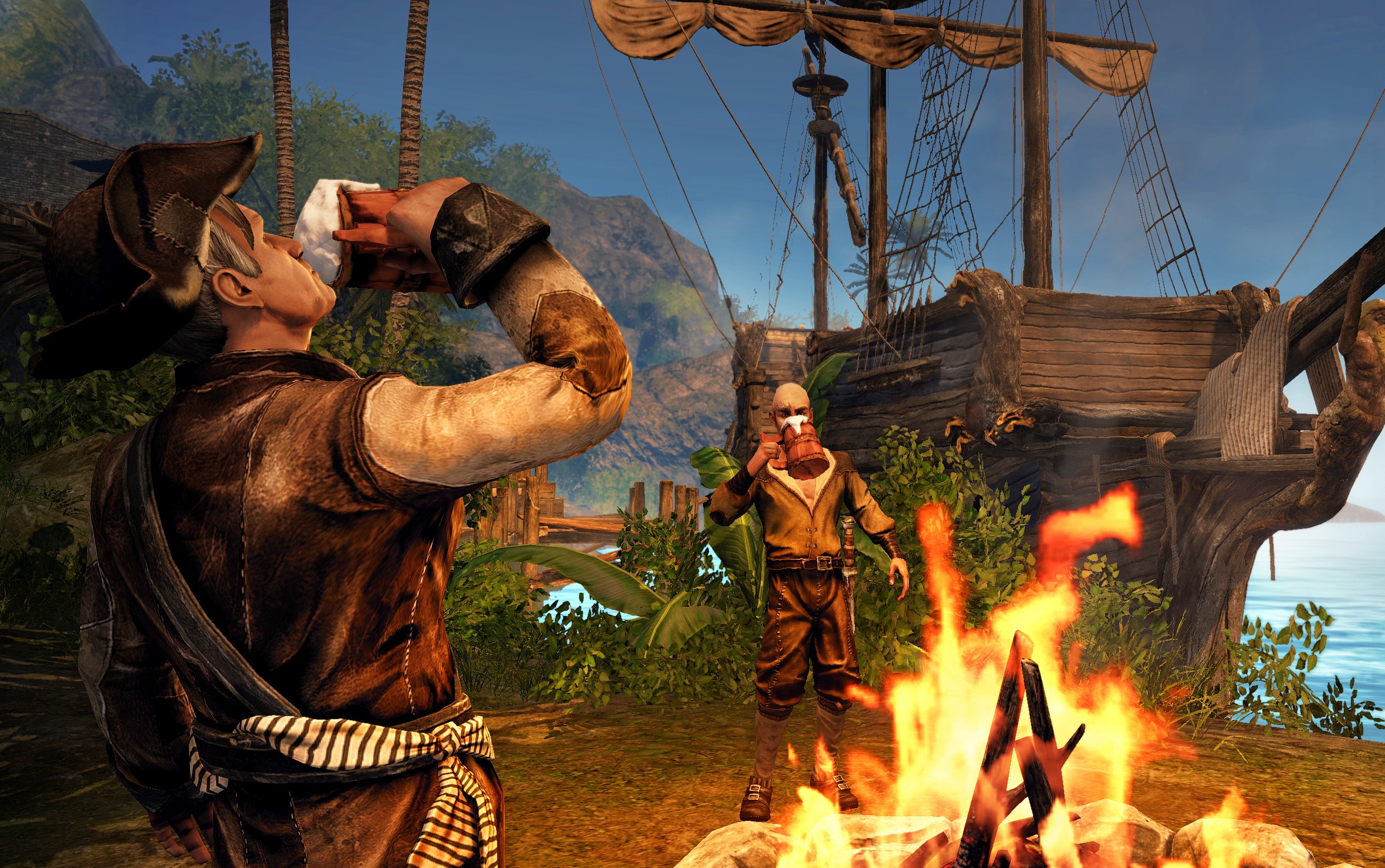 Saying all of that, there are still good qualities to Dark Waters’ presentation. The jungle atmos and music create the appropriate atmosphere, and whilst the voice acting on some of the NPC’s is terrible it somehow adds to the tone of the game – drunken pirates should sound terrible surely? The jungles are lush and the lighting and weather effects lend a nice sense of realism to the world, even providing a few beautiful moments here and there. Just don’t expect the game to live up to the standards of bigger name RPG’s – not even on PC.

Risen 2: Dark Waters certainly has it’s faults, and for some the technical limitations and clunky combat system will be enough to completely disregard the game. It is brimming with character though, and brings a much needed sense of humor to bear that helps smooth over some of the rough edges. If you can stick with it for a few hours and get familiar with its bumps and bruises then there is a pretty good experience to be had, but Risen 2 is very much one of the roughest of diamonds.