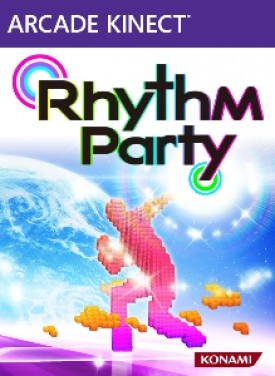 Overview
With the invention of Kinect, Microsoft promised us that we would be able to play through new experiences that would be totally unique and original.  Most gamers were skeptical, and with good reason.  Peripherals like this could open up new doors, but more often than not, it  could also lead to store shelves being filled with shovelware when developers could have working on something more meaningful.  Fortunately, although Kinect has had its share of rotten games, many of them have been quite good and the future for the hardware add-on is bright.

Rhythm Party is a new game for the Kinect that was published and developed by Konami.  As you can guess from the title, it obviously fits into the  dancing/music category of games.  However, it adds a unusual twist to the genre.  Is this twist a gimmick or a revolution?  Does Rhythm Party reveal an exciting new type of gameplay, or is it destined to be forgotten?  Find out in the following review. 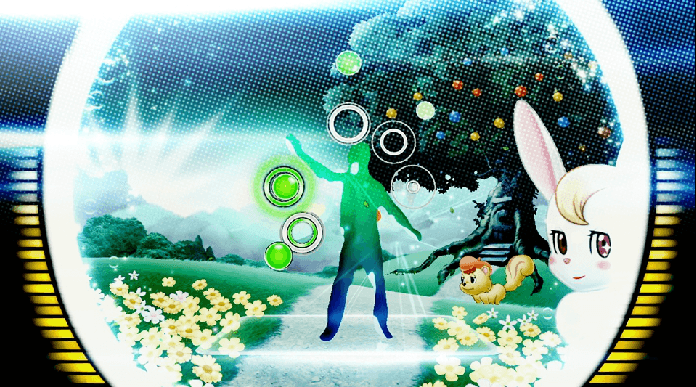 Gameplay
I had no idea what to expect when I was assigned to review Rhythm Party. I had not been keeping up with, and I was not even aware it was coming.  Once I started the download, I figured that this was yet another clone dancing game, trying to rip off Dance Central or Just Dance.  I nurtured this thought all the way until I actually was standing in front of my TV waiting for the music to start.  I even skipped all the text blocks that tried to explain what the game was like.  I assumed that I would be mimicking dancers while trying to get high scores and that this game would track my moves less accurately and be a low budget experience.

Thankfully, I was wrong.  Once the music started, Rhythm Party did not have me mimic anything.  At first I was shocked and confused.  There were only bubbles appearing on screen. Naturally, I tried to hit them, and then it became clear that that was the idea.  However, I was still a little bit doubtful.  Is this all the game amounts to, hitting bubbles in time with the music?  Heck, it doesn’t t even care whether my hand or foot touches them.  This game is too easy and boring.

After that, I tried another song.  However, then I decided to challenge myself.  I tried thinking of crazy ways to hit to the bubbles.  I determined that as long as I had to play through this game, I might as well make it fun.  And that is where the real magic of Rhythm Party begins.  The game started giving me more points, encouraging me to hit bubbles on the ground with my hands and bubbles in the air with my feet.   It awarded me for jumping all around and dancing like I just didn’t care.  Plus, it made me look damn good while doing it.  Mountains of special effects poured around me, as if I was in a music video.  Combos started flying and I kept up the pace, although I was panting by the end.  My virtual body onscreen was made to look as though it was pixelated, and it made me look I was an awesome break dancer.  Thankfully, the video replay at the end proved that I looked like a total fool,  as otherwise I would have been harboring some rather fantastical dreams. 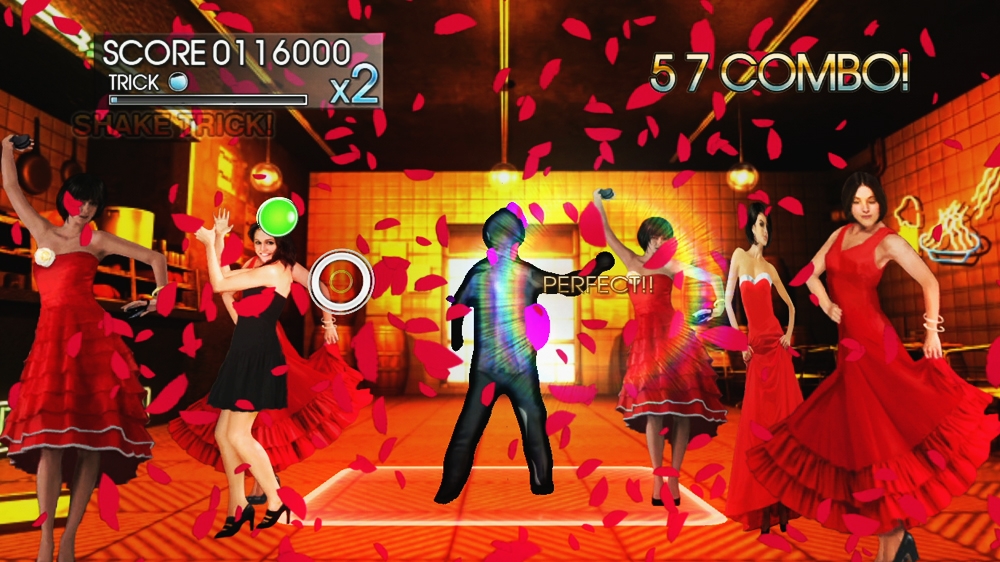 Finally, I decided to check out the help section to see exactly how this game functioned.  It explained things rather well.  Think of this game as a skateboarding game.  You get awarded for doing tricks and the better the trick, the better the score is.  The more you keep in time with the music, the higher the score goes.  The higher the combo, the better the graphics and special effects get.  Once you really start dancing, different backgrounds and costumes will automatically come out and make the entire game a myriad of  awesome visual experiences. It sounds weird, and it is, but it is fun.

One problem I had with the gameplay is that it made me so freakin’ tired.  To perform a rhythm trick, I had to do squats, and to do a jumping trick required jumping, while other tricks required a variety of contortions. This game proved I have not been exercising, which was rather depressing.  Other issues arise from the simplicity of the game.  Most songs will require only about 3 plays to get the highest score and there are no other modes.  Multi-player is also not included, although if it was, that might be really dangerous to everyone involved.  The replay videos are also limited in scope and their role could have been expanded greatly. 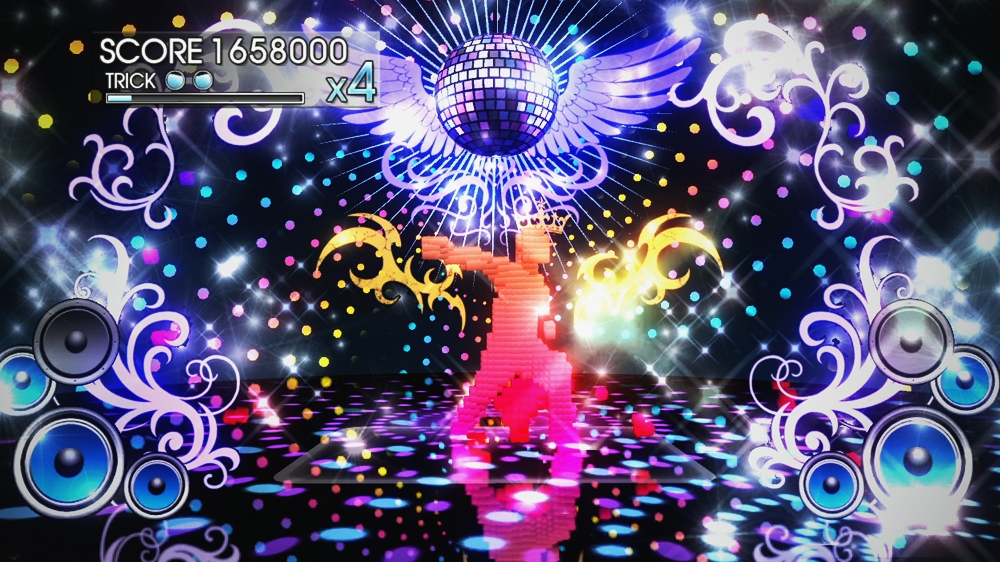 Audio and Visuals
This may sound surprising, but the audio in the game is a low point. Although billing itself as a music game, Rhythm Party only has a few good songs.  To make matters worse, there are only 10 songs included with the game.  There is one free DLC pack, but the other two DLC packs currently available cost money.  Clearly, Konami intends to make most of its money through DLC.

The other weird part about the tracks is that they cover a variety of musical tastes, from Vanilla Ice to J Pop to Lady Gaga. Although that is fine, it made the game seem less cohesive,  as is if didn’t have a clear direction.  Perhaps the lousy selection of tracks is also meant to force people to expand the game through DLC.

As mentioned, the visuals are outstanding. I really liked the creative direction that was displayed.  Each song had plenty of interesting effects that could rain down, and they were all extremely creative.  While your moving around, you probably won’t notice them all, but they were really well done.  And while they may not pop as well as some high budget games, they certainly made the game a joy to play. 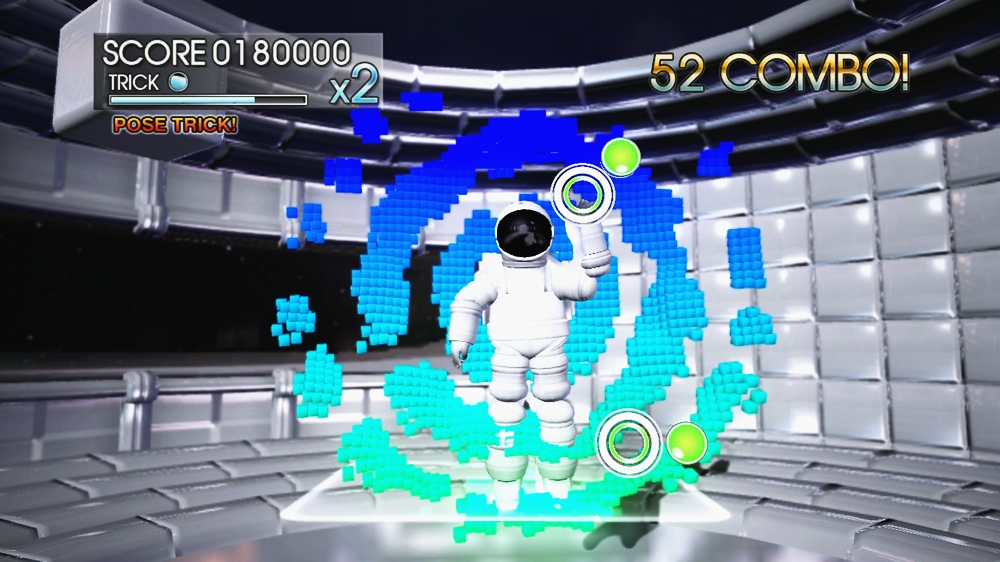 Overall
In conclusion, I loved this game, although I had a few caveats.  The set list verged on atrocious, and I could not believe there were only 10 songs, with only about 3 really worth getting into.  The UI was also terrible, and I had difficulty managing the menus.  Microsoft has already set the standard for how gamers should interact with Kinect menus, and unless a developer comes with something truly better, like Harmonix did with Dance Central, this standard should be the same in all games.  Nevertheless, these are fairly minor complaints.  This game is good for getting a quick workout, having a party or just expressing yourself. It may not completely reinvent the genre, but it offers a new take on it.  The visuals were engrossing and the gameplay was stellar. Although simple at times, the games relies on you.  The more fun and crazy YOU get, the more fun and crazy it gets.  Try the demo. It just might be your cup of tea.