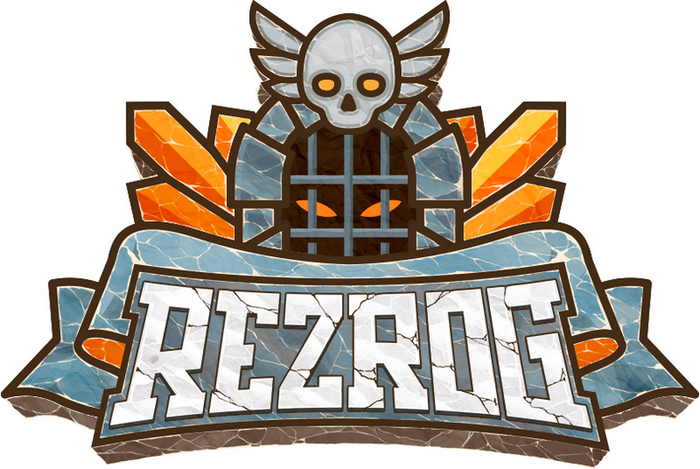 Rezrog seems like a game that was created only for me. Mimicking the tabletop experience while at the same time eliminating the part I avoid the most – interacting with other people. As for the rest of you, the trailer alone gives an impression of interesting art style coupled with a unique atmosphere. Surely that’s something can resonate with anyone, no matter how social or antisocial one might be. Rezrog grabbed my attention at the first sight, now we shall see if it’s good enough to hold for a bit more.

The story goes: Somewhere in the deceptively peaceful lands of Rezrog, several travelers are brought together by a series of unfortunate events and….uh..there is a…You know what, I’ll be a good guy and spare you the rest of it, you don’t have to suffer through the same. All you need to know is that the opening intro gives you the most generic story you can think of, so just fill out the rest yourself. Maybe there is a dragon in there and you have to rescue a princess that has to eat him so she could marry a leprechaun, it doesn’t really matter. All I know is that I had to watch the same opening three times in a row to get the gist of the story since the text was moving so fast I could barely keep up. But hey, in a procedurally generated dungeon crawler story is rarely in the spotlight. The only thing that matters at the core of it is the gameplay so let’s see what’s the deal on that front. 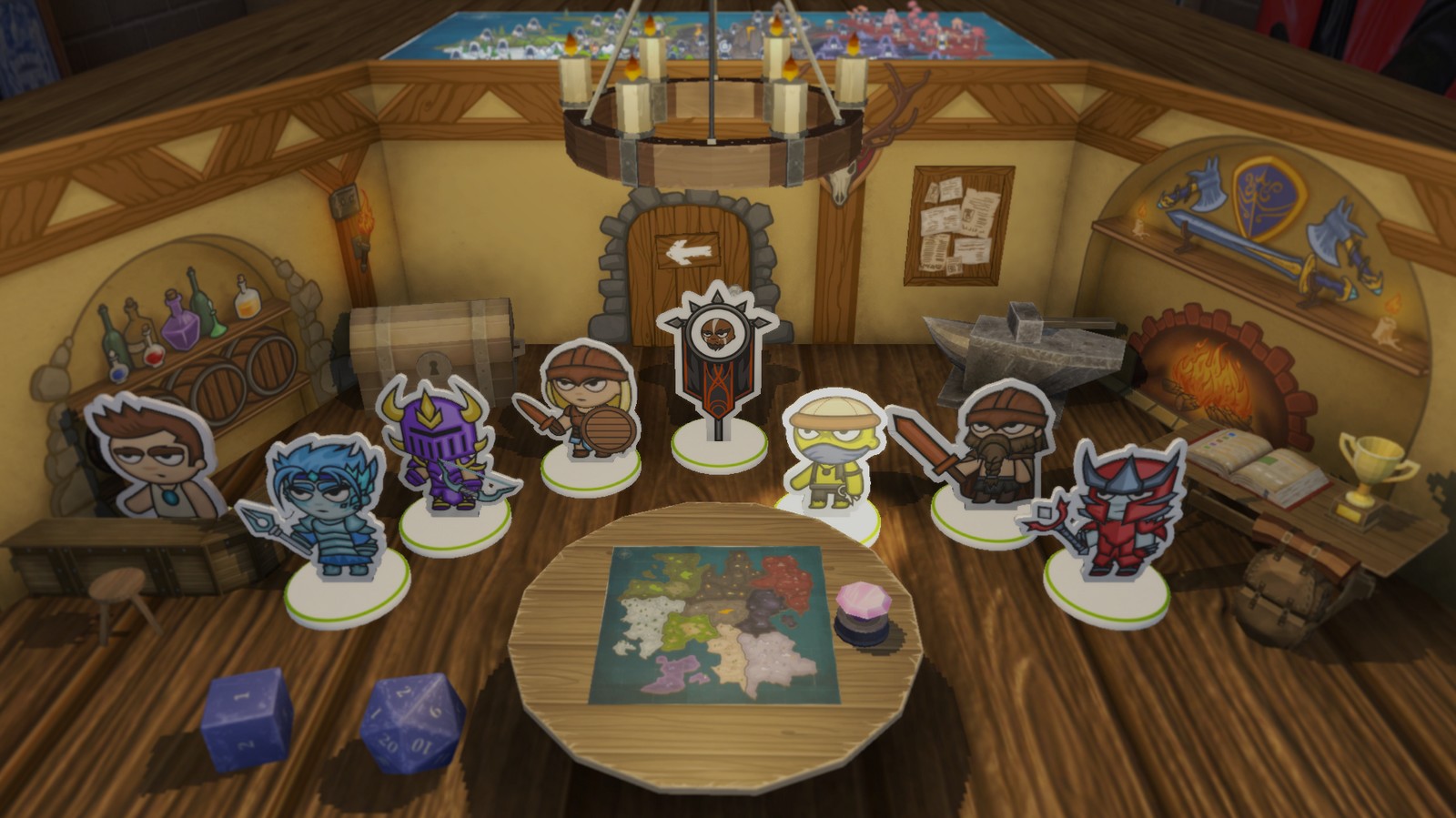 Here is the good news: there’s nothing generic about how Rezrog is played. You find yourself in a comfy tavern with 7 different classes consisting of (takes a deep breath) mage, archer, paladin, rogue, warrior and a summoner. As you can assume, some of them are more fit for close ranged battle and some for attacking from a distance. There is a world map in front of us and clicking on it bring us in front of the first dungeon. The first dungeon serves as a tutorial and there’s nothing randomly generated about it. The first pickups are all the necessary weapons, items and spells for whatever class you selected. Upon entrance, we’re also greeted with a random dungeon modifier that can work in our favor or against, depending on how unlucky we are. Sometimes it’s about us earning more gold as we’re exploring or encountering 20% stronger enemies, adding more fuel to already challenging game. Speaking of a challenge, this game sure doesn’t hold back. It’s actually possible to screw up in a tutorial dungeon if you take the game lightly. What happens then, does the character die? Well no, not really. He gets taken as a prisoner in that same dungeon. Now it’s up to you to rescue him by selecting another class. You can do that as long as you have classes left. In other words, you get 7 chances at conquering a dungeon and after all your characters are imprisoned – that’s it. Party is wiped and you can only start another one then. Still, you’ll have plenty of skills and weapons and items to find through dungeons as you explore so the odds might be sometimes in your favor. Strong emphasis on sometimes. Placement of the enemies and you might be a deciding factor between life and death. Add random floor traps to the mix and it’s clear that you have to think every time before you act. Otherwise, the novelty of getting imprisoned and having to rescue your party members wears off after a while.

With that said, there is nothing wrong with making a game challenging. What I have issues with is making it challenging through layers of grind. Remember that tutorial dungeon and how imperative is to go through it for mandatory weapons and skills for your class? Yeah. So let’s say you do it on the first run, you get some items, level up, a skill or two but what happens to the rest of the party at the tavern? Here is the kicker – nothing. “But wait Admir, are you implying that….?” Yep. You have to finish that first dungeon with every class in order to get the most basic, mandatory stuff. It’s either that or keep playing with that one character until you eventually mess up and get thrown in prison. In that case, good luck rescuing your level 12 character with the rest of your level 1 party. 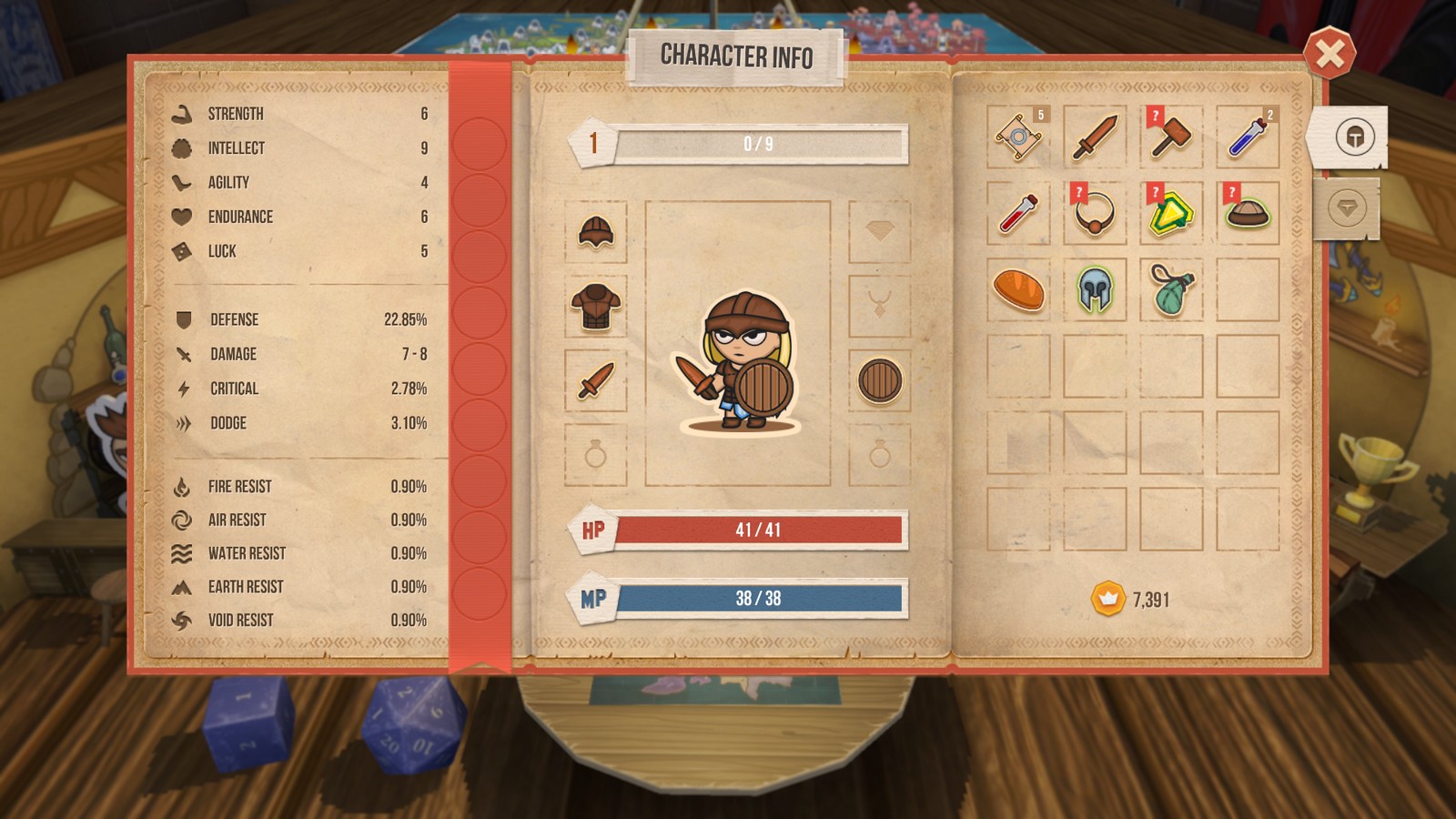 Rezrog captures the tabletop feeling rather well. Your characters look like cardboard cutouts and it’s adorable watching them hop around as you move. The whole dungeon is modeled as if you’re on a board map and there are neat little details around it like d10 dices, empty soda cans and coffee cups if you zoom out. Every time you clear a room and proceed to the next one, pieces of it start falling down so looks like it’s being built right in front of you. As you open up more areas of the map, the dungeon aesthetics and enemies change so you’ll play through ones with a snowy or fiery theme. It’s a small detail but it keeps the visuals away from seeming too repetitive. 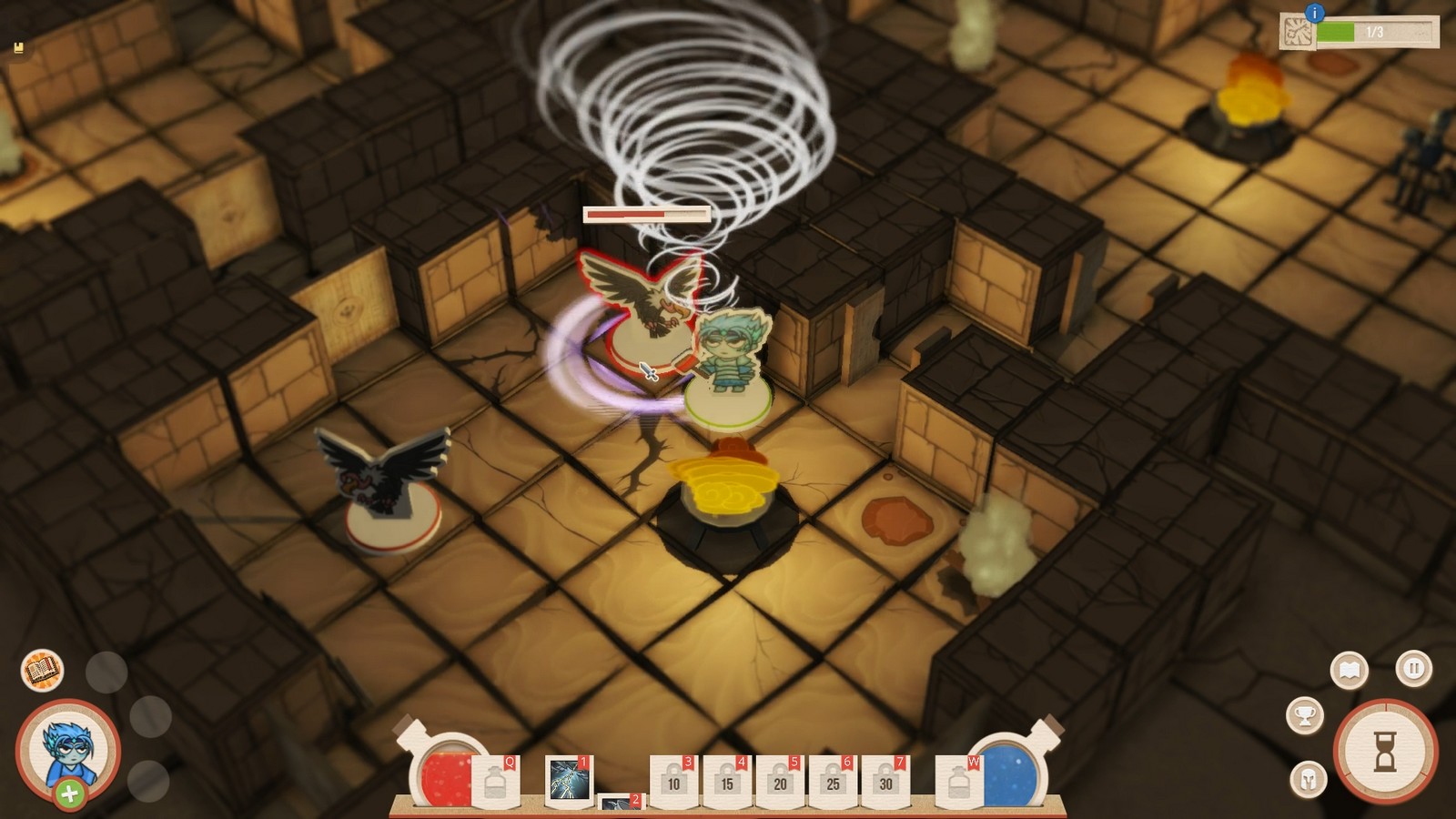 Not much here that will leave you impressed. Overall music motive does its job and fits well during the dungeon exploring. It changes slightly depending on the situation you’re in such as skipping around or being in battles. Voice acting is pretty much nonexistent, except for the occasional “oomph” and “argh” whenever your character takes a hit. 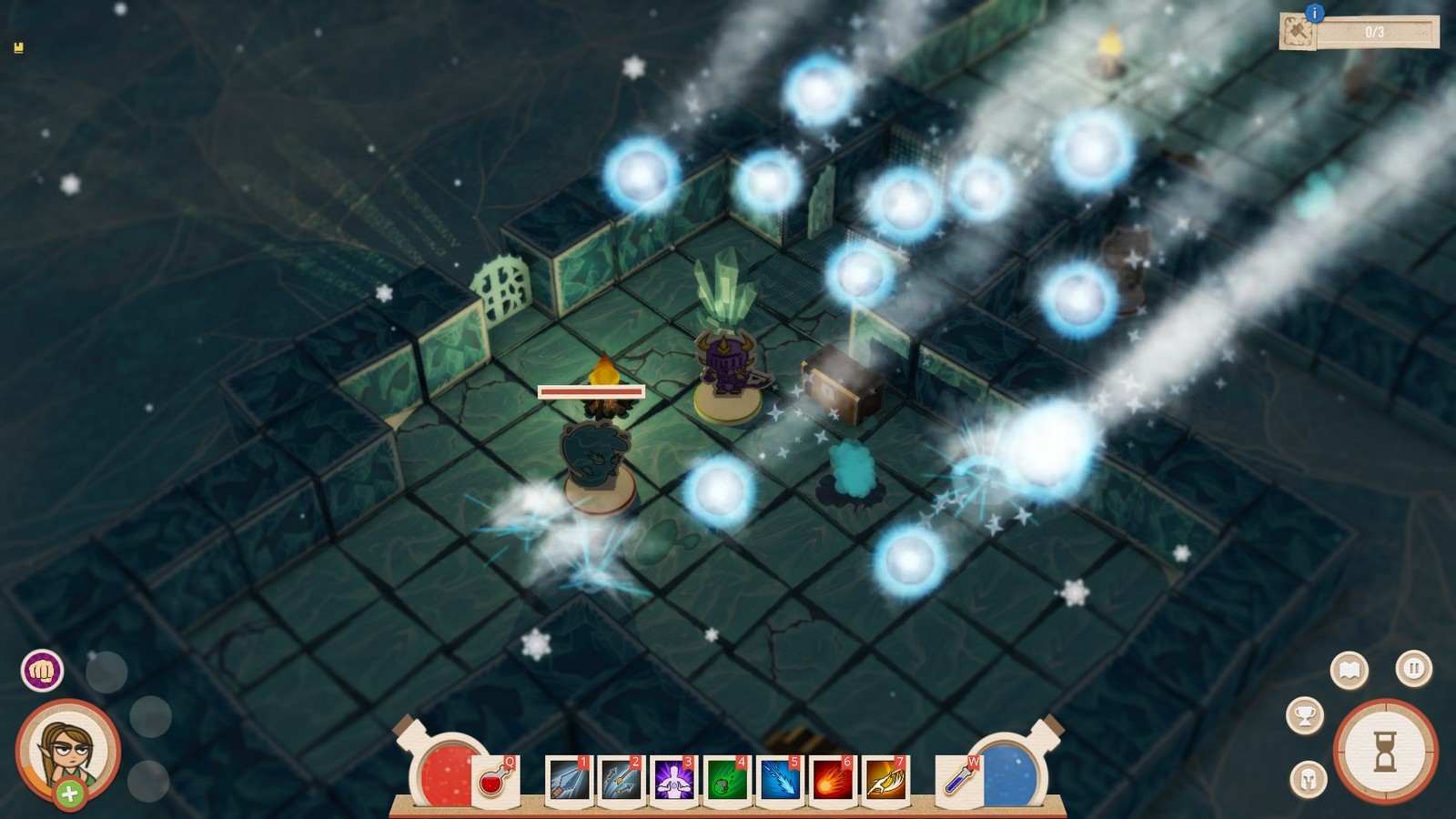 We’ve all been there. You’re playing some RPG and having fun when eventually you hit a grinding stop. For some games, it’s not a matter of “if”, rather than “when?” It’s something that comes with a package. Then we ask ourselves “is it worth it?”. Usually, it depends on a game. You measure the fun you had so far, the potential fun you’ll have once you pass that grinding hurdle and see what the result is at the end. But what can you do when you hit that wall shortly after the game starts? When the grind is so strong it almost feels like it’s a mechanic straight out of some Korean MMO. The only thing I can do in this case is to calculate the potential fun I might have, based on very little I had of it so far. And I’m still thinking, calculating.

It’s a shame, cause everything else that makes for a good dungeon crawler is spot on. The visuals, the atmosphere, even the music grown on you after a while. It is a game that I really want to enjoy but due to certain gameplay oversights, it just won’t let me. Rezrog, sorry that we have to break up so soon, but I assure you it’s not me. It’s you.
Capsule Computers review guidelines can be found here.

There is a decent game underneath it all if we could remove a good chunk of grind from it.
6