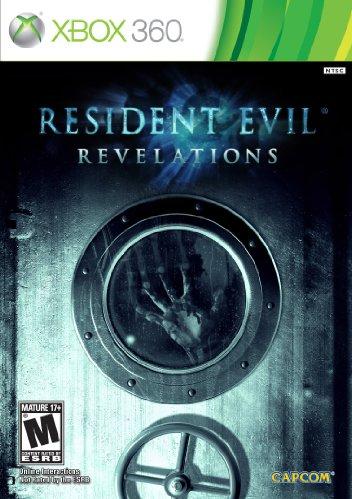 Overview
Resident Evil 6 was one of those games that you either loved (like we did), or hated. The lack of horror caused a great divide between the monstrous fanbase, leading to a lot of talk about what the series should do next, and just where the franchise should go. Resident Evil Revelations, which launched months before on the 3DS was actually the most loved title the namesake had seen since the likes of the fourth installment, and that was coming from a portable entry. Capcom are ready to capitalize on that and halt the negative chatter by releasing Revelations on consoles. Sure, the graphics getting an upgrade are a sure thing, but can a portable title make the transition to bigger screens and still be great? Let’s find out.

Story
Now, a good part of you have already seen this plot aboard the S.S. Zenobia and beyond unfold already on the 3DS version, so I will save you from a good portion of the details you can read in that review. I want to take a second to speak about how this plot plays out on consoles. As a brief reminder, this narrative places Jill and her partner Parker on a hunt for Chris and his temporary sidekick Jessica as they try to find answers about the lost city of Terragrigia. The plot is no different and plays out in the same, episodic fashion, leaving little to the imagination with a good number of cutscenes and journals laying about to give the player a clear and vivid perspective of the situation. 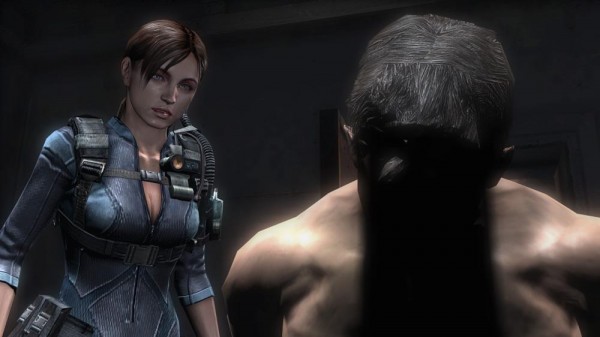 Yes, I still find this plot to be one of the most enjoyable to date, and yes, any fan new or old will be able to jump in and follow the events as they unfold, but the transition of the plot comes off as a bit odd due to the portable nature of the original compared to this console counterpart. You see, Revelations was made for the 3DS – and that means that the intended audience were those on-the-go type gamers who want to play in bursts rather than soak in hours behind a television. A good portion of recent titles in the franchise feature episodic tales, but Revelations in particular feels slightly (and I do mean slightly) out of place due to the way each chapter is broken up into smaller chunks for quicker consumption. This is not a problem really, but load screens are – and having to wait behind a good number of loading screens that take you away from the experience just to see a ten second cutscene can be a tad irratating to those who just want things to play out more streamlined. Of course this is an epic adventure into the dark and the atmosphere still sets that tone of unease, but expect to be interrupted from time to time as you engross yourself into one of the most fascinating stories to date.

Gameplay
It was hard to believe that I was playing such a sharply made Resident Evil on a handheld last year, but considering how much legwork has became involved with the latter entries, Revelations has a lot to live up to as a port. It mostly pulls things off effortlessly, bringing back that over the shoulder third-person perspective to a much broader crowd of fans. Also like the original, each character plays nearly the same, featuring their own unique arsenal, with plenty of pick-ups of ammunition and herbs to be found to make the journey bearable. Being that we are not on the 3DS anymore, players are going to notice that the controls have been remapped and tweaked a bit to provide the same kind of experience on a normal controller. Players can scroll through weapons and grenades by utilizing the d-pad, with the face buttons being utilized for item usage, melees, and event triggers (or the action button for the old-school folk). 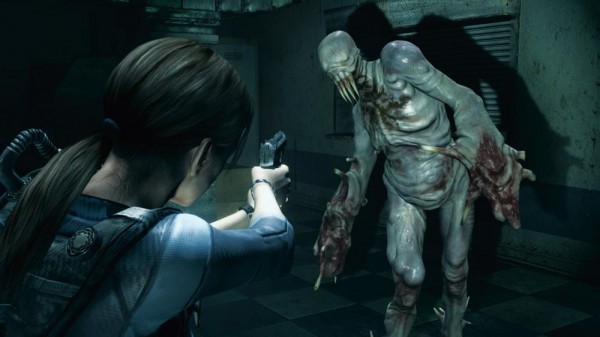 It wouldn’t seem like a difficult change to make to bring the experience to a controller, but the lack of a touch-screen takes a bit of the clever design away from the game. Before, we were able to access and change up our inventory at the touch of a button, or solve puzzles by tracing fuses with the stylus. Now we have everything handled with the control stick or the face/shoulder buttons, and while this does help give the game the appeal of the classics, it does not feel as imaginative or quite as fluid as it did on the 3DS. Dodging for example requires the player to time their dodge in the direction of the attack with the A button. Yeah, it works – but you are almost guaranteed to botch it a few times as nailing the timing with the stick on the controller without a prompt amps up the difficulty when it comes to dealing with precise movement. The map is now featured on the main screen, and can be accessed in full from the in-game menu. I remember enjoying my map being located on the bottom screen of my 3DS, but the ease of exploration is just as great within this console version, as players have full control of their map and can spin it around at any angle to figure out where they need to go next. 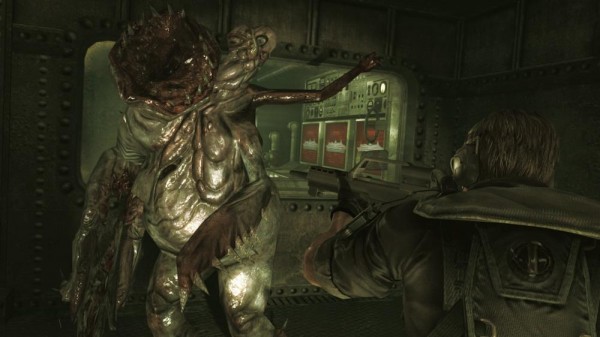 Luckily, even though the controls feel a little less clever this time around, the game still plays wonderfully. Revelations has some well placed enemies to ensure there are a good number of scares for the player, and the emphasis on ammo preservation runs high to give the player a sense of tension. The Genesis Scanner is now easier to use with the controller as well, so finding more ammo and secrets come with less stopping, letting the player take in their surroundings in full as they explore the icy depths or dark hallways of the Zenobia. Those who want more replay out of the main campaign will also be happy to know that a harder difficulty has been added known as Infernal Mode, which replaces enemies and items to provide a more random session. 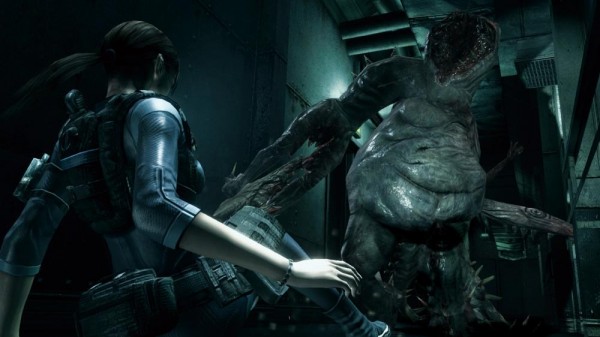 In my opinion, due to the now discounted price of Revelations on the 3DS alone – I would say that the main reason to buy the console port aside from not owning the first platform would be just to experience Raid Mode. Just like the original, the concept is to simply stay alive – alone or with a friend, while waves of enemies pop in. The console version ups the ante by adding in Rachel and Hunk as playable characters, more outfits, weaponry, enemies, and other small features, making the mode feel more fleshed out and enjoyable. I will even go out of my way to say that the “horror aspect” of the franchise that fans have been complaining about with titles like Resident Evil 6 makes a better comeback in just this mode than an any console styled Resident Evil game we have seen in years. Imagine you are struggling for bullets, you have low HP, and herbs are not even an option anymore. That fear of more enemies appearing creates an amazingly intense atmosphere, and drives home the survival horror that Resident Evil is all about.

Visuals and Audio
This is going to be the main reason most will want to upgrade from their portable versions of Revelations, and by “this”, I am talking about the graphics. The models themselves look fantastic, showing a ton of detail down to the threads on our heroes’ attires, and the effects such as water and blood seem up to par with what we see on current generation platforms, so they come as a pass. The enemies don’t look nearly as polished, but are still rather menacing enough as well. Oddly enough, it was the framerate that caused the most problem during my hefty time with the game. While Revelations is a port of a portable game, there really shouldn’t be much of an excuse to have the game chug while trying to load the next area as the visuals – while decent, are not as demanding and should have been able to render without seeing load screens or framerate drops. The bonus costumes for the characters however are sweet icing on the cake of Raid Mode, giving a ton of incentive to keep the game in your console for hours on end. 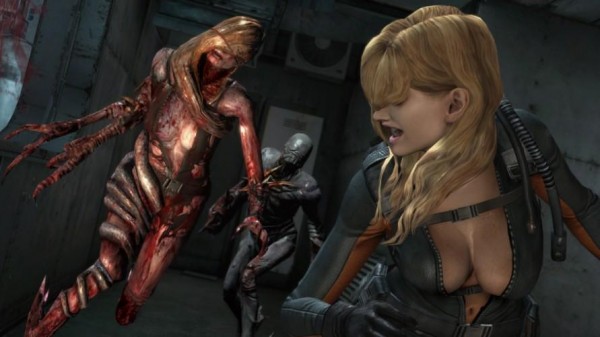 There isn’t a lot to say about the audio, honestly. The 3DS version seen fantastic voice acting from the cast we have grown accustomed to over the years and a haunting atmosphere due to the creaky doors and knobs on the Zenobia, and that has come over perfectly to the console version. I still find Keith and Quint to be utterly annoying, but the soundtrack is still sets the player up for a thrill-ride, and personally, that is all that matters when it comes to the sound in any survival horror game.

Overall
Resident Evil Revelations isn’t as good as the 3DS version, but don’t think for a second that it’s existence doesn’t matter. Every single Resident Evil Capcom have delivered this generation have been either highly praised or criticized by the hardcore fan-base that have been with the series from the start, and this release brings in a balance by delivering a fine dose of much needed horror and tension to consoles yet again. In ten years time, Revelations is going to be looked at as that hidden gem in the series that everyone fondly remembered for taking us back to when creaky doors and empty rooms left us uneasy, and the action you experienced was done at your own will. That is why I recommend this port to anyone looking to restore their faith in this classic franchise, as unless you already played enough of the 3DS version – this is one upgrade that is worth the investment.