Overview
First thought that rings through my head as soon as I look at the box is that this is just another dirt bike game. As I start playing I realize how wrong I was in my assumption. Red Bull X-Fighters transitions from the normal racing dirt bike game to strictly stunts and wheelies. Only by winning over the crowd can the player achieve stardom. Let’s discuss how the game compares to its racing cohorts.

Gameplay
Shockingly, this is the first dirt bike game in which I did not have full control. While a player may propel forward by hitting the gas, the normal directional navigation is substituted with a wheelie control. 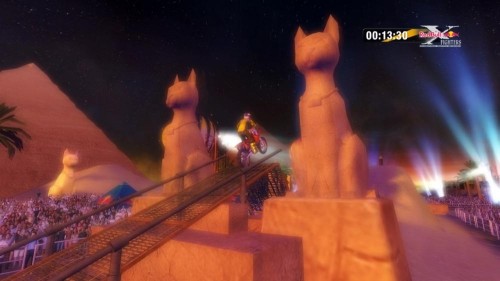 The left analog controls the length and height of a wheelie and directly affects the speed of the bike. Performing wheelies before jumps accelerates your speed which gains the player distance and height – both are greatly needed for maximum points. After a jump, adjusting the left control accurately can cause the bike to spin faster resulting in front flips or back flips. Just make sure to land on the wheels!

Requiring players to finish a tutorial is always a good start. By providing the basics like wheelies and stunts, the gameplay is set for the rest of the game. The only aspect that is progressively shown is the development of harder stunts. However, any stunt can be performed before it is actually known not limiting the player to a small selection. 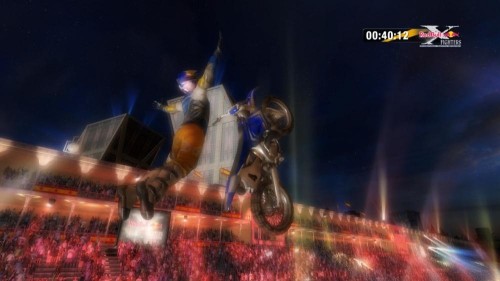 Objectives vary with the mode that is selected. In each mode, you must attain a high enough score or fast enough time to acquire a trophy. Only by getting trophies can a player gain more fans. Gaining over 10,000 fans will unlock a nice achievement!

My absolute favorite mode to play is Show Off. Giving the most freedom, Show Off provides enough time to perform any trick you can muster. Usually these stages offer high jumps necessary for chaining stunts together to collect large bonuses. I was even able to perform a sextuple jump!

Next up is the exclusive Time Trial stage. Not requiring a single trick, Time Trial is all about speed. By performing wheelies you can gain enough speed to attempt for a gold trophy.

Performer requires a player to gain enough points and perform selected stunts. At the beginning of each Performer stage, the player will be briefed with the required stunts to finish the level. Throughout the level the stunts will be shown on the bottom left portion of the screen. Once the stunt has been performed successfully, the icon will disappear. 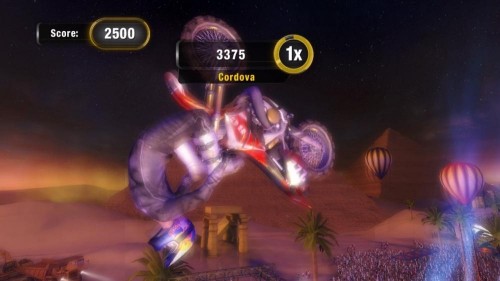 Pressure combines aspects from both Performer and Time Trial. While requiring certain stunts to be completed, this mode also must be finished within a time frame. With the most requirements, Pressure is probably one of the harder modes to play. My advice is to chain the two stunts early on and focus on gaining speed throughout the rest of the level. This way you can eliminate one of the requirements and manage your speed to hit jumps effectively.

Graphics/Audio
One graphical feature that is good to see in any game is in customization. In Red Bull X-Fighters, you are able to customize your look and type of bike that you ride. You may not have a wide selection, but having this option definitely gives the player more power. 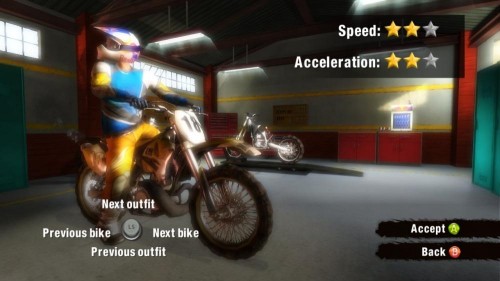 Since the environments are closed, graphics could be devoted to the surrounding quite thoroughly. A lot of the tracks are repeated, but the environments are very detailed. One of my favorite obstacles is actually available towards the end of play. A level known as “the longest jump” provides a hard challenge that can only be achieved my gaining a high speed. This is my favorite because of the interesting roulette table that you need to pass through in order to complete the jump. 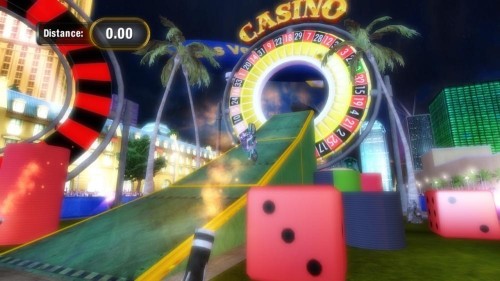 With audio in mind, I feel that more could have been done. Throughout the game you are listening to the same announcer over and over again. Restarting stages you hear the same voice, and it can be exhausting. My fiancée asked me, “Is it saying Wilma?” And yes, yes it did. Wilma just so happens to be a trick you have to perform, and  I was repeating that stage several times.

Overall
I still feel there is something missing to this game whether it is the freedom of navigation or extras like mini-games to add some unique filler. Without a horizontal movement the game lacks freedom for the player to explore. Perhaps adding some sort of multi-player with games of chance could provide further enjoyment.

However, Xendex did deliver a solid backbone of gameplay for a linear freestyle bike game. The objectives are clear and attainable. Each stage has its own levels of difficulty, and hardcore players will try to get a gold trophy to complete the game entirely. With wonderfully crafted environments, players can visually enjoy crashing head first into the ground. But even with leaderboards to compare scores, the game seems to lack re-playability. While the game was fun to play through, once the game is completed there is not much more to offer.

See what else Konami has to offer!